Like most foods I’ve researched, there always seems to be more than one theory around the origins. You would think Belgium would be the most obvious guess when it comes to waffles, but it’s actually not that simple. In conclusion, I’ve decided to bypass going into the deep history behind the pressed golden batter and jump right into six waffles I encourage you to devour and if you feel so inclined, write home about. 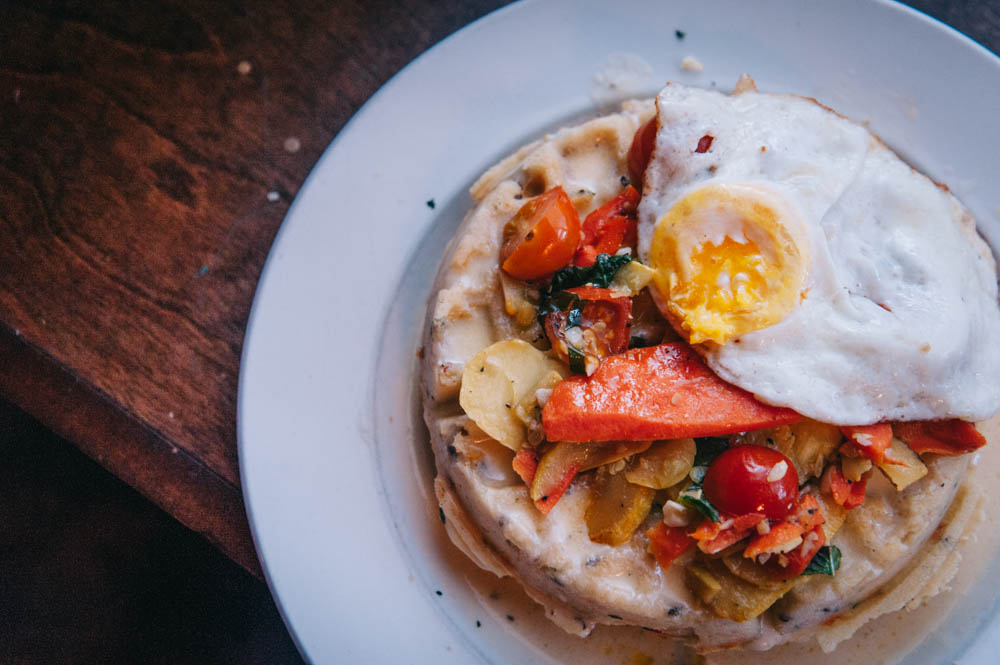 City O’ City is no stranger to vegetarian and vegan-friendly fare. Half the time I forget how much I enjoy meat with almost every single meal and find myself craving their waffles. Take their Savory Waffle ($13) for example, a vegan and gluten-free waffle smothered in creamy vegan cheese fondue—or you can opt for their Taleggio cheese sauce and a fried egg ($3 extra). If you identify more with the flexitarian, then pile it high with a seasonal vegetable ragu. The Savory Waffle is served daily on all menus—breakfast, lunch and dinner. 206 East 13th Avenue, Denver; cityocitydenver.com 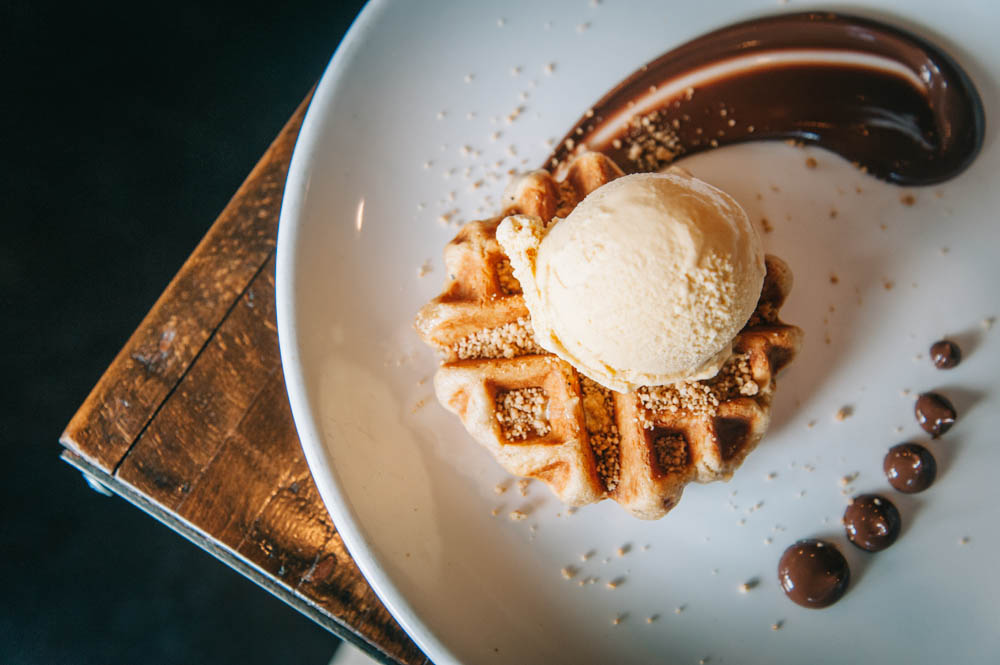 Central Bistro and Bar—in the LoHi neighborhood—is known to have an impressive whiskey menu and some of the tastiest craft cocktails. If you haven’t dove into their food menu, though, I recommend their Nutella Waffle ($8). It’s soft and doughy on the inside and crisp on the outside, served over a generous swirl of Nutella then sprinkled with Speculoos cookie crumbles and a healthy serving of Vietnamese coffee ice cream. Let’s be honest, you really can’t go wrong in the dessert department with a little extra love and nutella spread. 1691 Central Street, Denver; centralbistroandbar.com 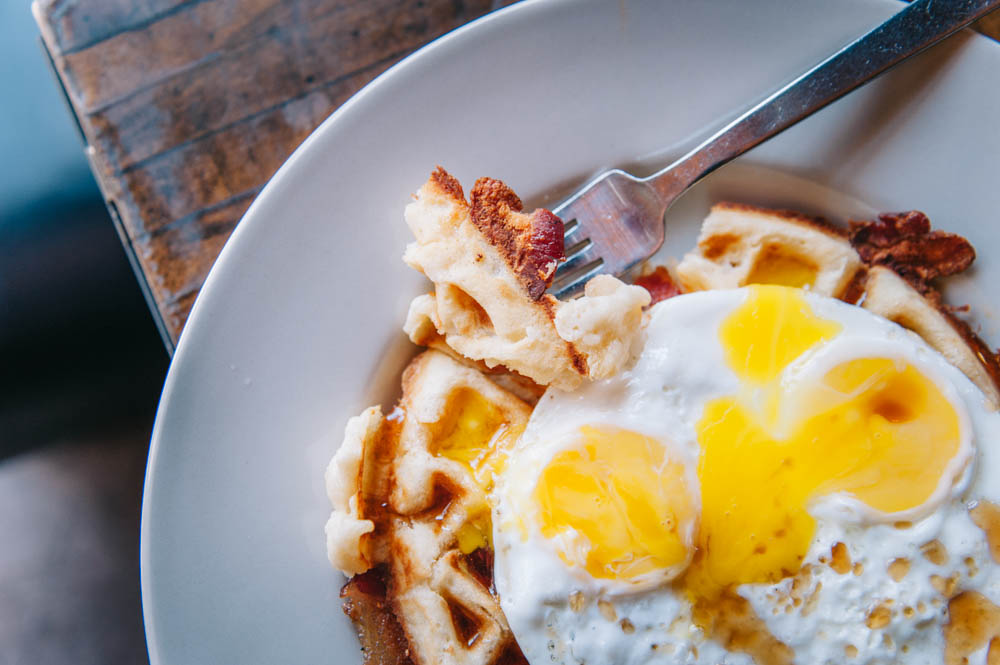 Once a carriage repair shop in the 1800s and an auto repair shop with several different owners through the years, Gary Lee’s Motor Club made its final transformation in 2012 as the Club and Grub we know and love. This South Broadway neighborhood watering hole is a go-to for locals craving a cold one, but if you were unaware, they serve up one tasty, homestyle waffle stuffed with crispy, crunchy strips of bacon, warm syrup, and two runny fried eggs for the perfect sweet, salty and savory weekend hangover aid. The Bacon-Stuffed Waffle ($10) is served on the Saturday and Sunday brunch menu from 11 a.m. to 4 p.m. 176 South Broadway Street, Denver; garyleesmotorclubandgrub.com 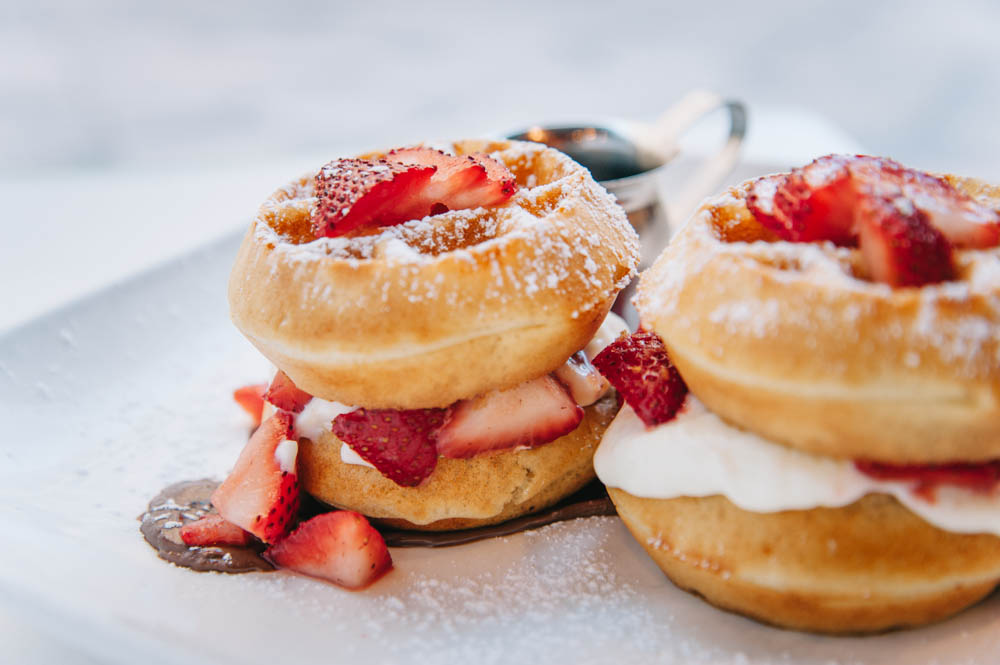 The Dead-Head-Waffle aka Cheesecake Waffle at the Corner Office.

Excuse me, did you say “cheesecake waffles”? Yes, that would be correct. The Corner Office brings their A-game with the sweet-tooth brunchers in mind. Depending on which day—whether it be Saturday or Sunday—you’ll be offered the very same waffle but two different names. On Saturday it’s known as a “Cheesecake Waffle” ($12) and Sunday it’s the “Dead-Head-Waffle” ($12). Whichever day of the weekend you choose, you’ll still be offered the same to-die-for dish—two sandwiched waffle rounds filled with cheesecake icing, sliced strawberries, sprinkled with powdered sugar and more berries, then nestled on top of a generous smear of Nutella. Don’t be alarmed if after each and every bite a small sigh slips out of you—they’re actually that good. 1401 Curtis Street, Denver; thecornerofficedenver.com 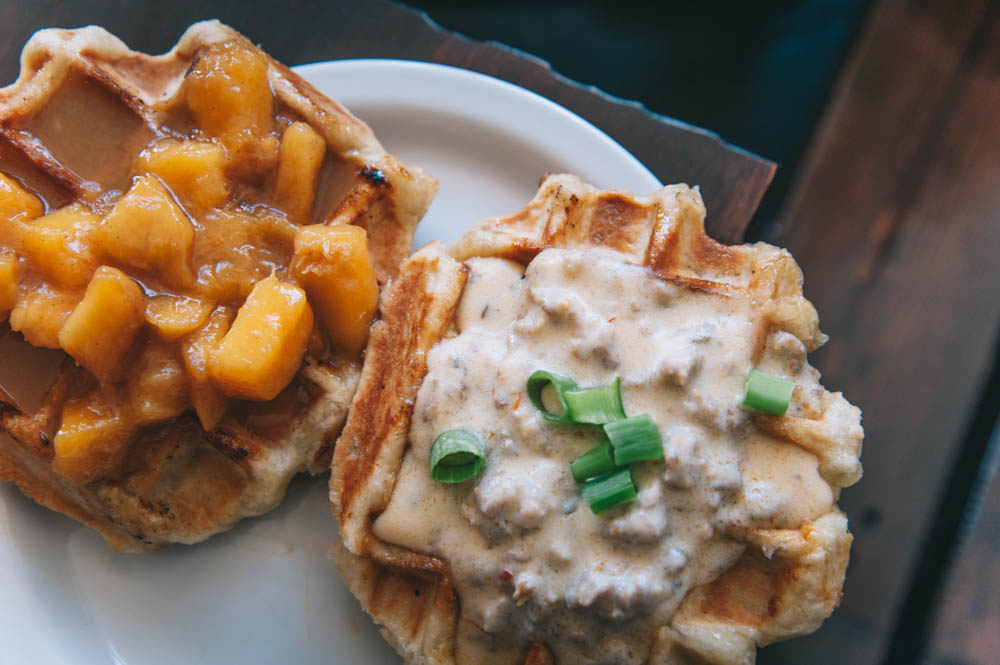 The Spicy Sausage Gravy Waffle and The Palisade Peach Compote Waffle at Waffle Up!

Waffle Up! offers an authentic Belgium “street-cart” waffle called the Liege. Liege waffles are made from a yeasted dough with pearl sugar mixed in instead of batter—which we are typically used to—to create a caramelized coating once cooked. The Spicy Sausage and Gravy ($6.50) waffle is a sweet and doughy, dense waffle topped with sausage gravy and chives. If you’re like me and insist upon having something sweet to follow the savory, try their seasonal Palisade Peach Compote Waffle ($5.75). An added perk of Waffle Up! is they’re open and serving up waffles everyday of the week except Mondays. 300 Elati Street, Denver; waffleup.com 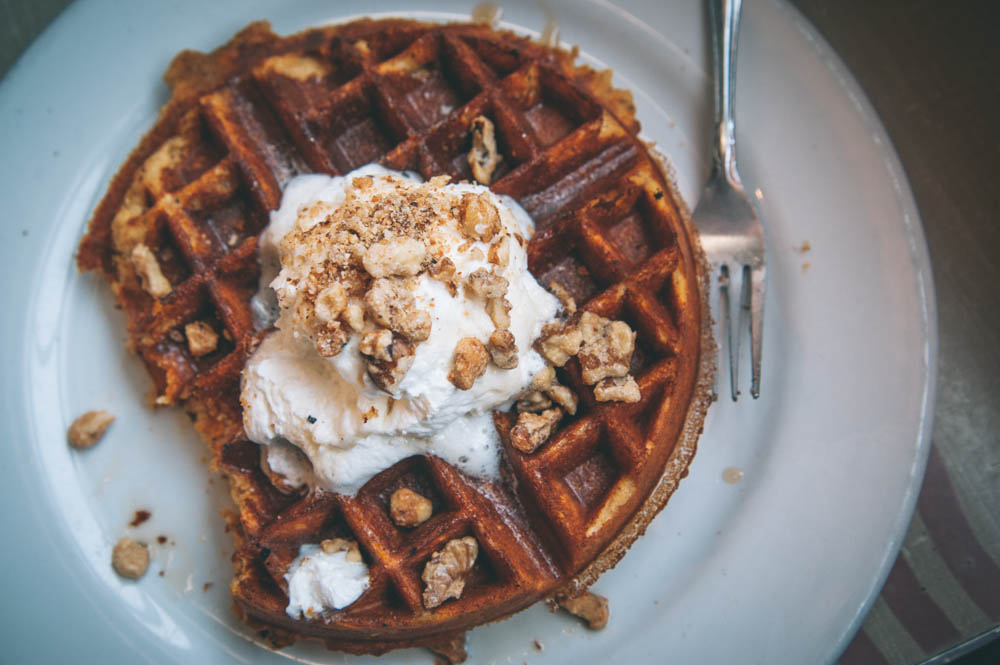 Every once in a while, there’s that one dish that we can’t stop thinking about. Crema Coffeehouse’s Sweet Potato Waffle ($6) is exactly that for me. They start with a gluten-free sweet potato waffle, a dollop of rich hazelnut whipped cream and a sprinkle of candied walnuts. I expected the addition of potato to make the waffle dense and heavy, but it was surprisingly light. I find myself daydreaming about this waffle in particular due to its perfect balance of sweet, crunchy and savory. 2862 Larimer Street, Unit B, Denver