In a culture obsessed with body image and a media-riddled society with unattainable expectations, it can be difficult to find a community where size and shape are celebrated regardless of how varied they may be. Burlesque communities are known for creating a body-positive environment and inspiring performers of every body type to shake and shimmy their way to self-love.

303 Magazine had the privilege of sitting down with a panel of Denver’s burlesque performers to get their take on what it means to love our bodies and how we can all strive to be more accepting of ourselves and one another. Watch the video and read on to peel back the layers and uncover their inner thoughts on body positivity.

The panel of 12 burlesque performers represented a wide range of experience and backgrounds. Many of the participants call Lannie’s Clocktower Cabaret their creative home. Dee Dee Derrière, Dr. Bones, Ariella May DeWitt, Tara Dice, Willie Won’t He of Poosie, and Circum Simon have all performed at the basement club on Denver’s 16th Street Mall. Charlie Valentine and Bender Flames of Burning Loins Burlesque are recent additions to Denver’s burlesque community hailing from Fargo, North Dakota. Adam Goldstein, who has opened many shows at Lannie’s and is the frontman for Denver-based Irish-folk trio Avourneen, has recently begun his boylesque career as Matzo McBallz. Polka Dottie and Chicky Brûlée perform throughout the Denver area at many local venues. One Chance Fancy, originally from Nashville, Tennessee, combines her love for burlesque through performance and her photography business, La Photographie.

The diversity of backgrounds and experience shared by these 12 performers brings together a well-informed and unique look at body-image issues as they pertain to burlesque and our greater society as a whole.

Performers expounded on self-image and how that carries over to performances. “I treat burlesque with a ‘Fake it until you make it’ mentality. When I started, I was the heaviest I had ever been. I felt really uncomfortable with my body,” Polka Dottie explained.

Both Chicky Brûlée and One Chance Fancy expressed hesitation at showing their stomachs to audiences. “At first, I was like, I can’t do this. Nobody wants to see a big girl get up there and take her clothes off,” Brûlée said. Her mindset changed after seeing her first burlesque show. “I’ve made it a point that, in most of my pieces, I don’t even wear [a corset] because I really want to embrace something that I’ve always been kind of ashamed of,” Brûlée said.

One Chance Fancy found a similar sense of liberation on stage. “After I went out on stage that very first time, I had so much fun. I loved it and the audience response was very fulfilling. I haven’t not shown my stomach ever since,” Fancy stated.

A running theme for many was the separation of an on-stage persona and their off-stage selves. “Kyle [Kastner] and Dr. Bones are very different people. Dr. Bones can do things that Kyle would never, ever dream of doing. Having that switch, being able to say I am literally someone else is what got me over my personal body issues,” Dr. Bones said.

Burlesque not only provides an outlet in the form of an alter ego, but it gives one control over how they present themselves to an audience. “You’re going to see me the way I want you to see me,” Fancy said.

DeeDee Derrière pointed out that burlesque is not a magical fix for body issues by saying, “[It doesn’t take] all of the things you’ve hated for so long, and all of the sudden you’re like, ‘I love it now.’ That’s not true. I think that burlesque gives you a space in order to do it that’s safe.” Derrière said. “You may still not enjoy your stomach or your thighs, but it creates a space that is safe to say, okay, here it is, here are the wobbly bits.” 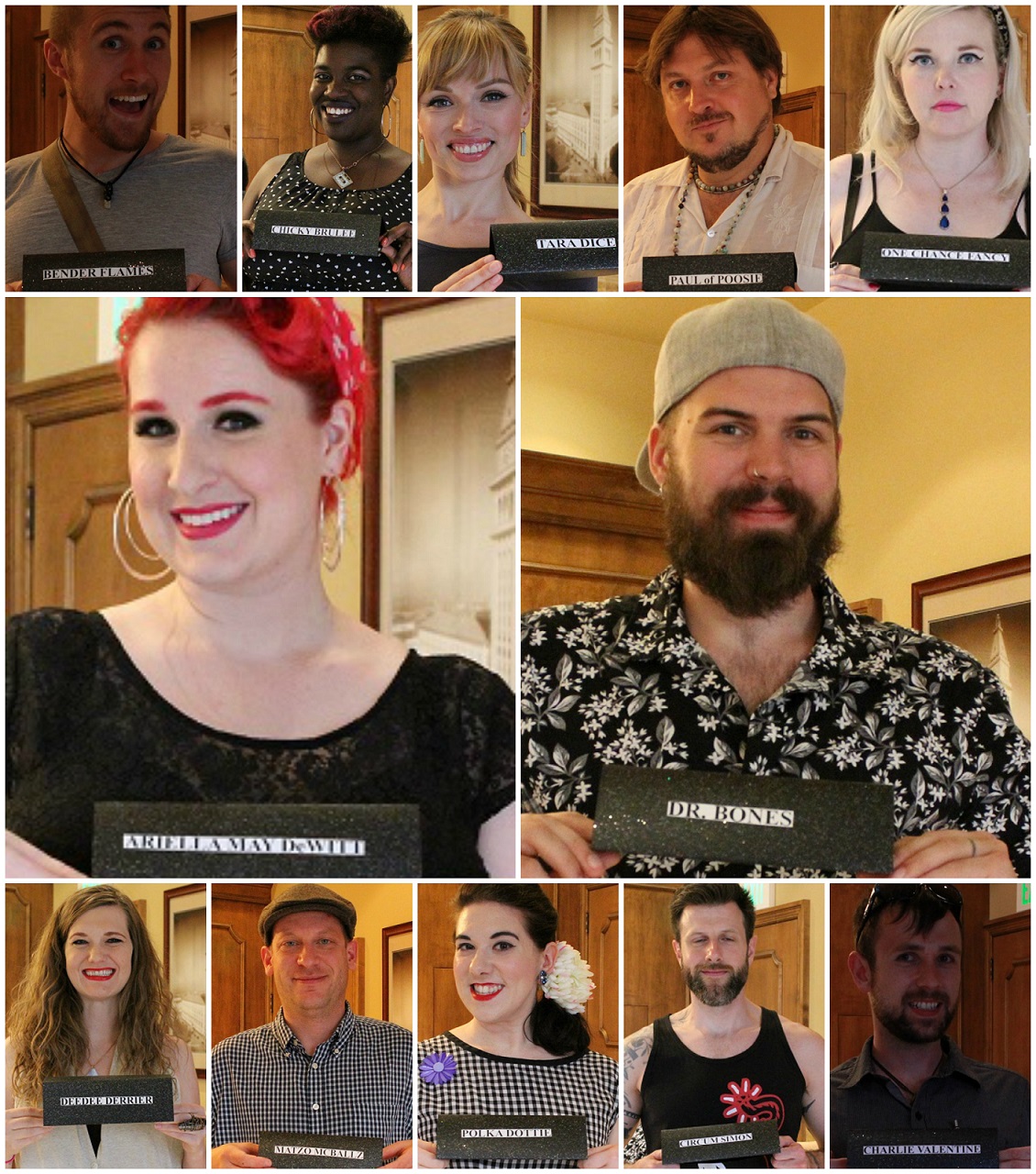 The panelists. Photos by Desiree Duzich.

Comedy as a Means Towards Acceptance

Burlesque isn’t always sexy and seductive. Sometimes, it is comedic and outrageous. Often, performers feel a pull towards being comedic in order to be accepted for being different from society’s standards.

“I remember early, I was told that as a male, comedy is how you get the audience because you need to be universally acceptable to everybody, including other men in the audience,” Dr. Bones said. “The way you win them over is through comedy.”

Ariella May DeWitt pointed out the flip side to relying on comedy for acceptance, “I have found a lot of plus-size or fuller figured girls immediately go funny in burlesque,” she said. “They feel like that’s their way in because their body is not acceptable for everyone.” That is a large part of DeWitt’s decision to keep comedy out of her routines. “I don’t want to bring comedy to my burlesque. I want to embody that powerful, sexy woman. I feel it’s really important for those of us who are on the larger spectrum, in terms of body type, to present that glamorous, beautiful, sexy woman — that we need to.”

Chicky Brûlée thinks performers can have it both ways, “I always use a lot of comedy in my burlesque, just because that’s naturally who I am,” Brûlée said. “I’m still a sexy, voluptuous woman, but I can also make you laugh. I have all of that in one package.”

“My biggest issue with my body is that I’m so little and scrawny. I have scars all over,” Charlie Valentine said. The sentiment of being too small in stature was commonly expressed among the male participants.

“Body image, for men, is way more prevalent than anyone says it is. If you are not Fight Club ripped, then you are somehow less of a man,” Willie Won’t He expressed.

Circum Simon has also struggled with being smaller. “I feel, being underweight as a guy is not as socially acceptable for a man as it is for a woman,” Simon said.

Dr. Bones reiterated, “There is just as much subliminal messaging in the media for men as there is for women. It’s just a lot more subtle.”

Boylesque has become more prominent in the burlesque scene over the past decade. Many boylesque performers struggle in finding their space and defining themselves as artists. “There [seems] to be no delineation between boylesque and stripping. People don’t realize they are two different things,” Dr. Bones said of audiences initial impressions of male performers. “Men are the ones who watch us the most. The moment that it is announced a boy is coming out on stage, there is instantaneous judgment from men. It goes back to gender-conditioning and it goes back to gender roles.”

Elaborating on the roles of males in society, Matzo McBallz had this to say, “Boylesque puts you in a position where you’re being very vulnerable. You’re putting yourself out there. You’re being as stark and honest as you possibly can be and that is not an act that is normally associated with masculinity in Western culture.”

Too Curvy or Too Thin? Overcoming Typecasting

Whether one is curvy or thin or somewhere in between, there will inevitably be a moment where one’s body doesn’t adhere to someone’s expectations. Chicky Brûlée shared her experience as a full-figured performer, “When you’re a curvy girl, it’s very easy to be placed into a box that’s — sometimes, that’s why you get booked, because you’re a curvy girl and there’s not enough curvy girls in the cast.” Brûlée said. “And that’s not fair.”

Burlesque draws a diverse array of body types and it isn’t only curvy women who struggle. “I feel like I’m in between a body type. I’m not a perfect skinny girl, but I’m not this beautiful curvy woman. Sometimes, it would be easier if I was super curvy because I could own those curves. I’ve got them sometimes and sometimes not,” DeeDee Derrière said, who has struggled with anorexia and has found burlesque to be therapeutic in its acceptance of all sizes.

Every body type has had unfair expectations attached to it at one time or another. “We assume that thin people are more disciplined and smarter, more worthy of respect and love and, obviously, that’s all bullshit,” Tara Dice said. Polka Dottie added that despite the fact that some people will always want someone thinner or more curvy, the focus should remain on what one brings to the performance.

Burlesque’s Contributions To A Body-Positive Society

Bender Flames pointed to a larger theme of acceptance. “I do think, a lot of times, we kind of demonize that one percent, or ten percent. What we hold so dear, in burlesque, is owning your own body and being happy with your body. We need to be celebrating ourselves rather than shaming others.”

One Chance Fancy spoke to the value of burlesque as a great normalizer. The art form, she said, brings that sense of acceptance to the audiences’ attention. “We get to do that for each other and for our audiences. We get to be the example.” Ariella May DeWitt said. “We get to be the ones that say, ‘Yes, I’m self-conscious at times, but I am going to get up there and I am going to be amazing because I love me and you’re going to love me before I’m done.’ We get to be that example for other people.”

The burlesque community and its performers are constantly pushing the boundaries of society’s beauty standards by promoting acceptance through creative expression of all bodies. While burlesque performance does not eradicate negative body image, as a whole, its celebration of all bodies is a spotlit inspiration creating a guiding light towards self-acceptance and self-love.

Author’s Note: Many thanks to Adam Goldstein, aka Matzo McBallz for his guidance in giving this piece a voice. The author is currently employed at Lannie’s Clocktower Cabaret. Video By: Desiree Duzich of Spoiled Beer Brat Productions.