The bass is turned up on the pre-mixed country playlist. It mirrors the heartbeats of the fans as they pile into the venue. Parked illegally, pickup trucks line the side streets, blocking the view of the industrial area surrounding the Grizzly Rose, arguably Denver’s most famous country venue. The fans are allowed to start entering around 6 p.m., 30 minutes after press and VIPs are corralled into the banquet room. The loudspeaker announces that the mechanical bulls in the back are up and running, but they stay abandoned the whole night—this is a die-hard group of fans who want to be as close to the stage as they can. 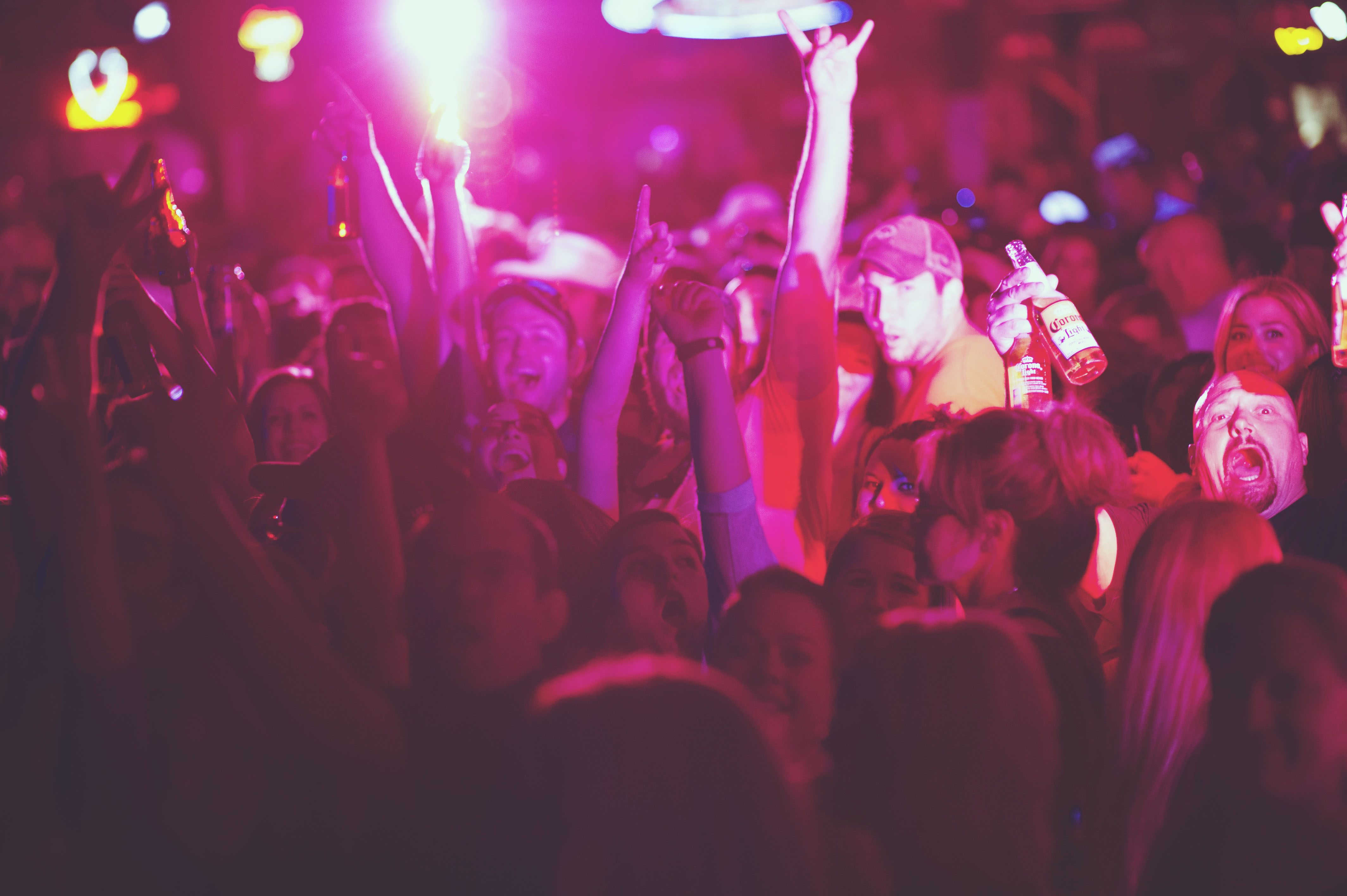 Audience at Shelton’s surprise show. All photos by Charles Hildreth

In the back room, there are tacos and hot wings. Promotional girls pass out sweet lemonade and iced tea vodka drinks in mason jars with lemon wedges and bright red stirrer-sticks with the Smithworks logo. The scene is mellow. There are not too many people from the press and only I and four other girls are in line for interviews. “He’s really the easiest person I’ve worked with,” a PR person informs my press counterparts, “And he’s so tall, you’ll all be so smitten when you see him.” We’re all young women and we’re all fans, but the last line is not directed at me. I’m about 6’4″ in my suede fringe boots and I don’t need to be more excited, I’m nervous as all get out.

The room falls silent as he walks in, even the men are in awe, the country super star is incredibly tall and he strolls casually past the buffet making a joking comment to his handler that is inaudible. The two laugh, he does not look at anyone in the room, just the food. He comes across immediately as bashful, as though this is not how he would have chosen to set up the event, with everyone staring at him and standing in a line waiting to ask two questions and have a picture taken. He us told where to stand and one of his team ushers us forward one at a time.

“I’m a fan of the things that make Colorado different.” 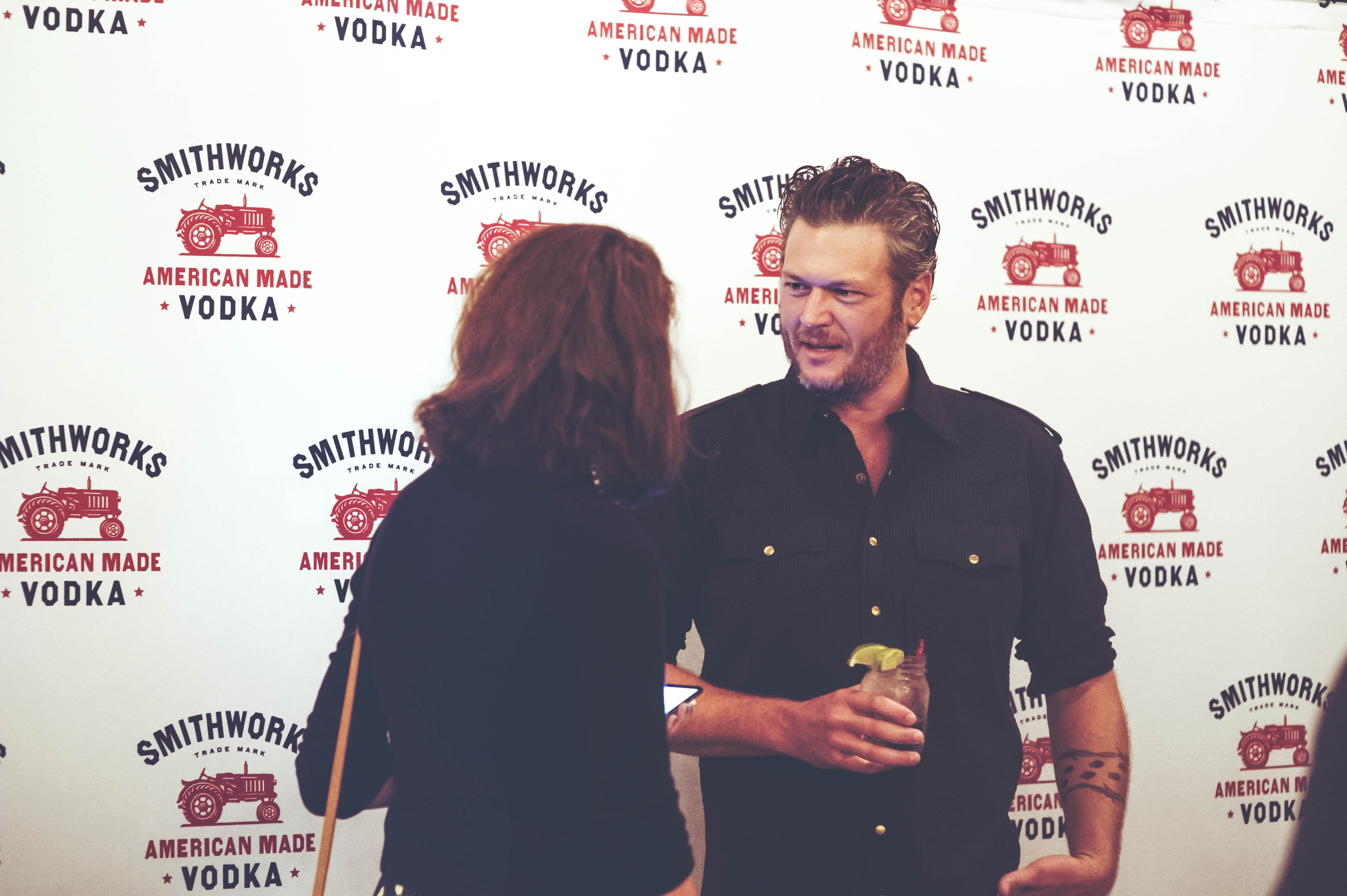 When I walk over he smiles at me expectantly and informs the team, “Oh hey, she’s tall!” I am immediately calm, his presence is gentle and he has an easiness that’s contagious. I bring up Country Jam, a festival he played on his recent 40th birthday in Grand Junction, his eyes light up.

“Thank you. Oh, that was when we had Gwen come out.” His eyes sparkle at the memory and you can tell how much it meant to him to share that experience with her. I ask him to give a little love note to his Colorado fans, “You know … the reason I’m doing one of these pop-up shows in Denver is because Colorado has always been good to me, you know? And not just out on a career level—although that’s mostly what I’m talking about—but just this place has always been good for my heart,” he said. “Whether it’s going out in the mountains, going elk hunting or deer hunting, or just being here on days off, it’s always been a magical place for me since I was a kid. So the fact that the country fan base is so strong of course, I’m gonna want to come do a free show here,” he said.

He explains his love of the state with a very nice drawl and you can tell he really likes it here. It seemed like it would be OK to press on about some lyrics he wrote that I enjoy. In his song “Came Here To Forget”, he describes moving on with a new partner. “That first kiss is like a Colorado hit, you better keep on keeping it lit.” I bring up the quote and ask him if he enjoys the recreation in Colorado, he stands up straight and gets a coy smile on his face before proudly announcing,“I’m a fan of the things that make Colorado different.” 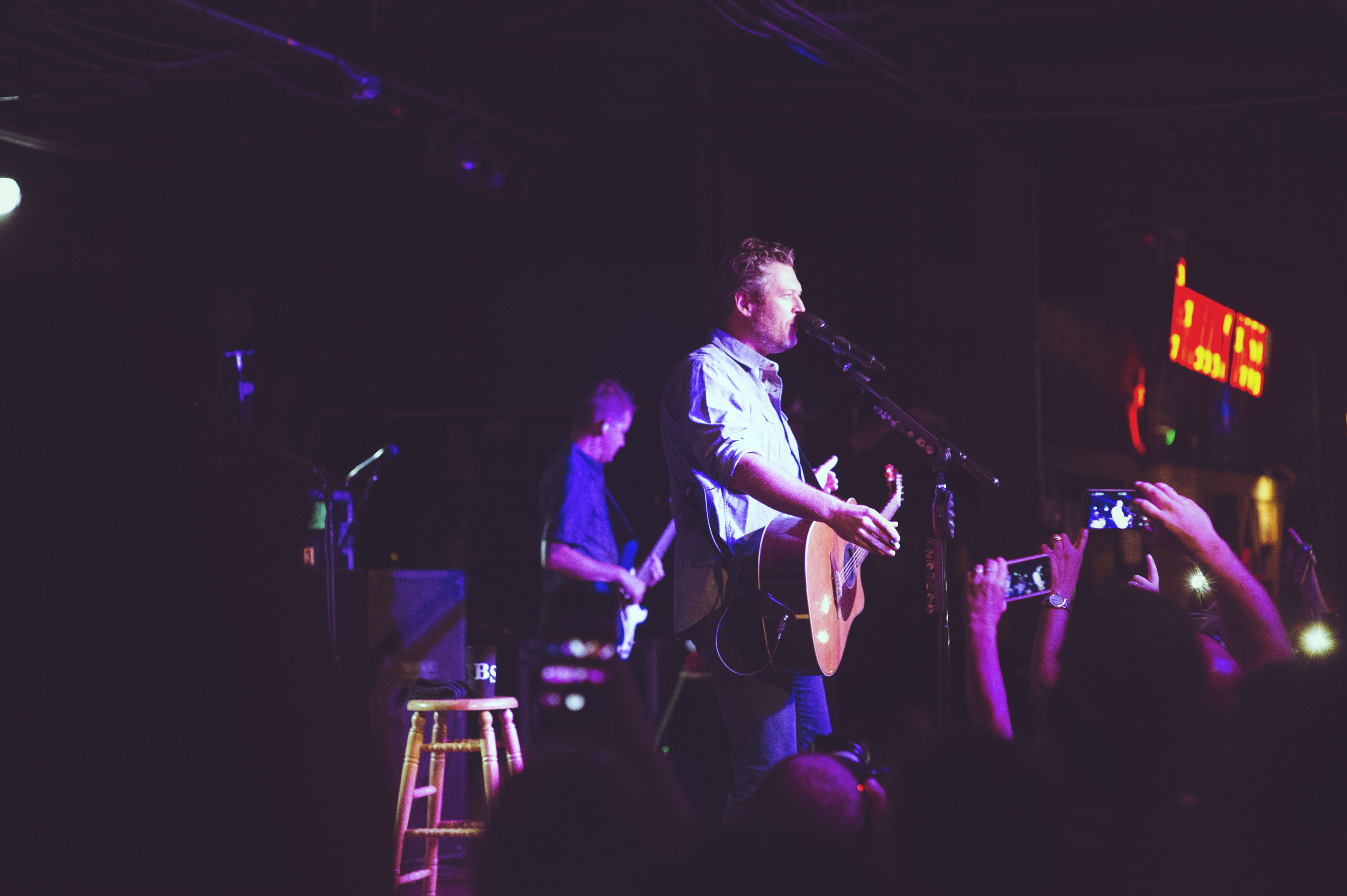 Shelton performing at the Grizly Rose.

If anyone was going to be described as a real charmer, it’s without a doubt Blake Shelton. I am not the only one who thinks so. By 7 p.m., the venue is at its 2,000-person capacity and the line outside still stretches at least a block. Shelton takes the stage to roaring applause and begins his set joking about how long he’s going to play and how he hopes he can remember the words to some of his older work. This is a different man than the one in the press room. He lights up the room and looks completely himself in front of the packed house. He shuffles through decades of his own music, the audience eagerly sings the counterparts in the duets and he is all over the front row, even grabbing phones and talking to the people being FaceTimed.

Concertgoer Alexis Burnley is at the show with some female family members. She found out about the show from a screenshot of the Tweet she saw on Facebook. I ask her how long she’s been a fan, “For years and years.” She nodded seriously, “Since ‘Ol Red’ and stuff.” This was back when Shelton was rocking shoulder-length curly brown hair. Burnley is from Lakewood and a huge country fan. I ask her if she thinks about Shelton and Denver in the same sentence often and she explained how surprised she was by the free show, “I would have thought Nashville.”

She’s not alone, other attendees Jasmine, Jannette and Marissa, are hanging out in the back of the venue before the show starts. Jannette tells me a foster parent she had in Arizona called her in the morning about the show. The girls are from Brighton and Thornton and laugh about what they are wearing—they came straight from work and waited two and a half hours to see the show. I ask them the same question about Shelton and Colorado. “His carefree spirit is very Colorado,” explained Jannette.

It was evident Shelton’s fans were ready to welcome him with open arms. It’s unsure if Shelton will continue his string of surprise shows (his last one was in Kansas City) and grace another city with his presence. But if you’re hoping to catch him again, your best bet is to follow him on Twitter or check out his tour schedule. However, in terms of seeing him for free in Denver, this might have been a once-in-a-lifetime deal. But who knows, considering how Shelton proclaimed his love of Colorado, we wouldn’t be surprised to see him back here soon. 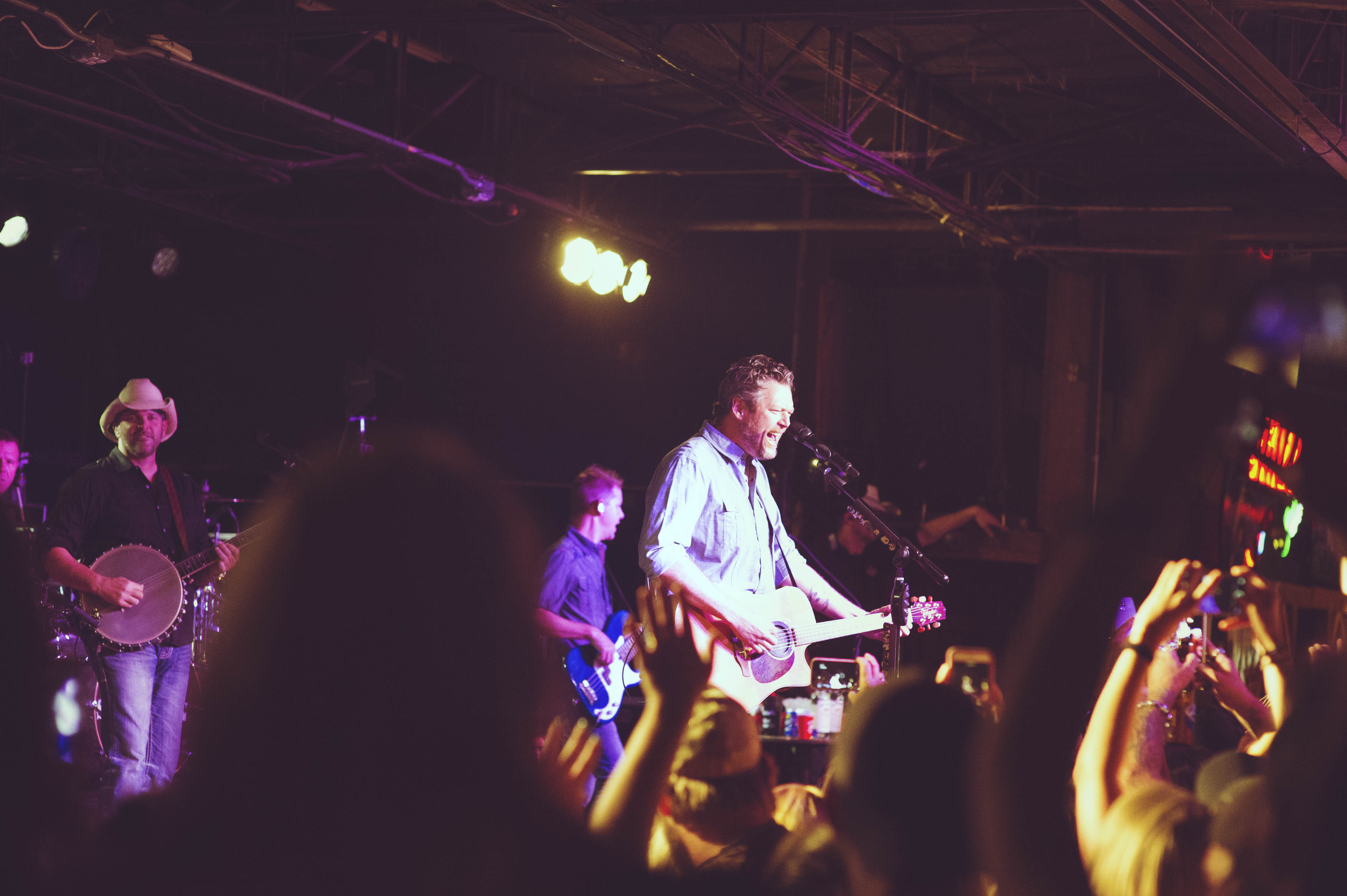 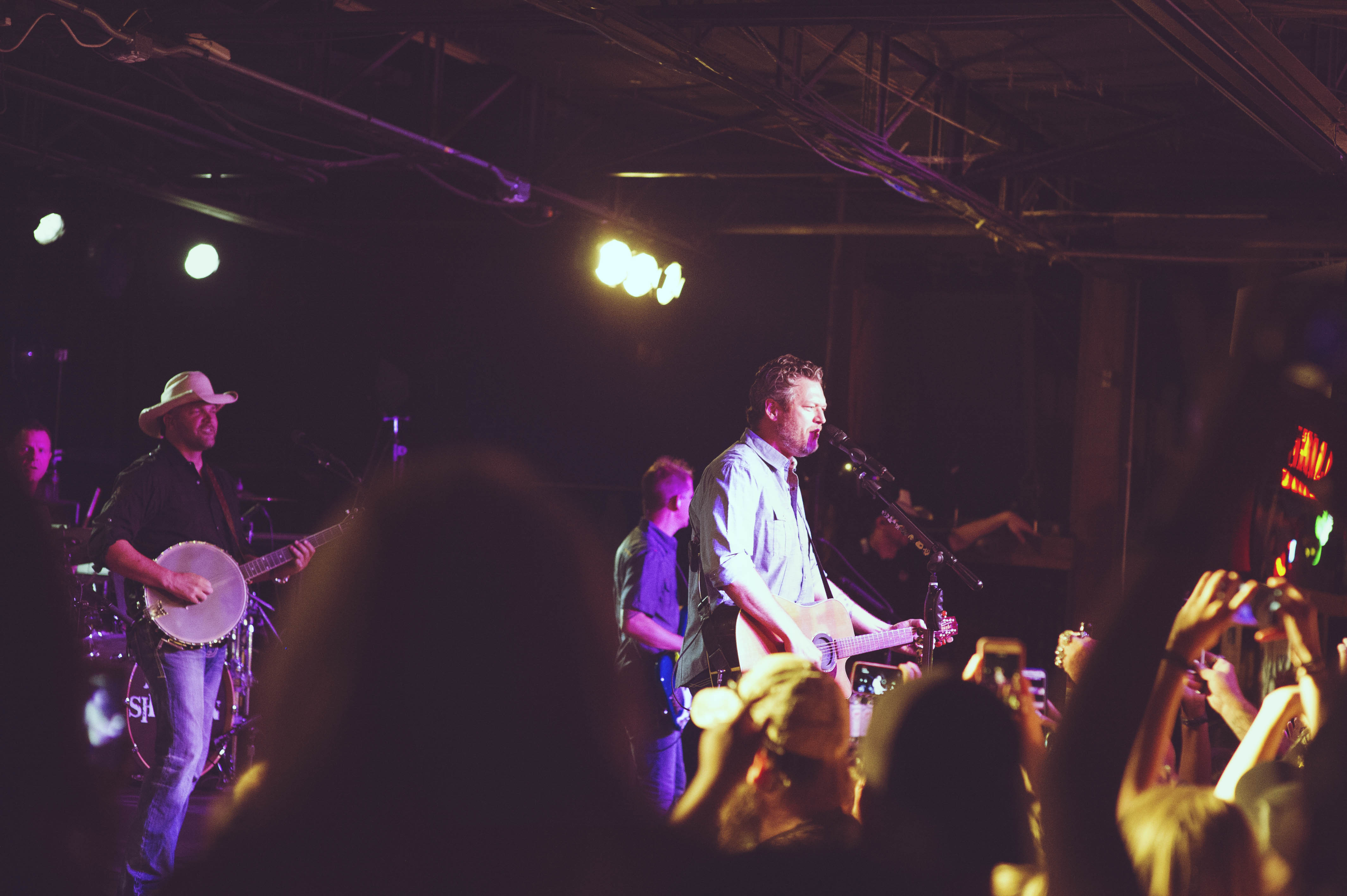