As a native Southerner, I tend to keep my eyes peeled for good comfort food around Denver—bayou Creole grinds, fried fish joints, sopped biscuits and Memphis- or Carolina-style BBQ—cornerstones of the kitchen that my Mom cooks and chains imitate. Chicken and waffles sounds just about as Dixie as you can get, but I don’t come across it too often when I go home to Christiana, Tennessee. While the origins of the dish are slightly cloudy (Pennsylvania Dutch had a hand in it, among others) one thing is concrete: Devil’s Food seized and perfected a mean iteration of it.

The dish involves two lone wolves of culinary territory, yet the Wash Park restaurant manages to marry them in a blissful ceremony. Sometimes, restaurants master the fried chicken and abandon the other half, or vice versa. At Devil’s Food, the continental breakfast waffle iron doesn’t cut it. They apply a little love and care while fluffing their Belgian creation to fruition. Instead of hanging the waffles out to dry, they drizzle maple syrup over the top. 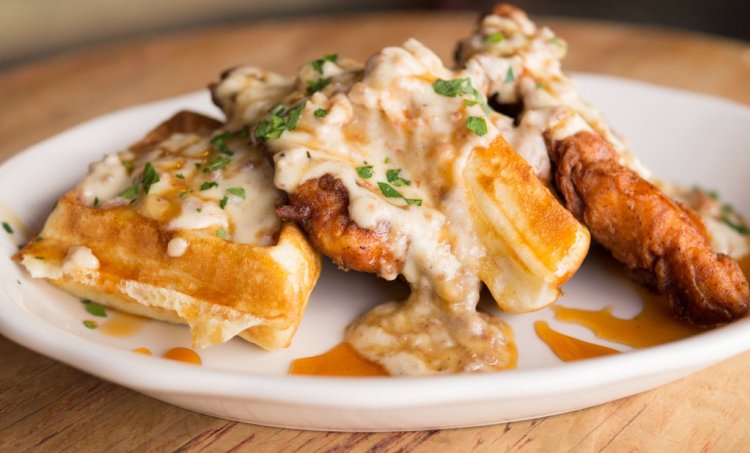 Next, they fry up two thick chicken fillets to top the spongy waffles and keep your knife and fork busy. To seal the deal, the dish is topped with a generous ladle of creamy sausage gravy. The gravy is the stuff of genius, as the chunky dressing mingles with maple syrup in a balance of salty and sweet. Sous chef Vanessa Mendez didn’t clue me in on ingredients in the rich and creamy gravy beyond chili flakes and thyme. Don’t ask, don’t tell—just eat.

I finish this behemoth almost every time I go, afraid if I box it up, the creation will vanish under the same spell that spawned it. But eater be warned: Completion of the chicken and the waffles can induce catatonia or heavy sleep. Fortunately, breakfast is always served at Devil’s Food so you champs can chow right before bed.