As members of Galvanize, 303 Magazine was awarded this unique opportunity to cover the Clinton campaign stop in Denver. Below is a special report of our exclusive access.

On Tuesday, June 28, 2016 Hillary Clinton made a brief stop in Denver. The presumptive Democratic nominee visited Galvanize, a tech-focused campus and co-working space in the Golden Triangle neighborhood. During her hour-long tour, she met with members of Galvanize, stopping to speak with employees of PanXchange, a web-based negotiation and trading platform, as well as Patriot Boot Camp, a non-profit that helps veterans become tech entrepreneurs. Afterward, she addressed the crowded Galvanize campus. She primarily spoke on technology, job creation and the importance of entrepreneurship. Throughout her talk, she often exemplified Colorado as a leader in job creation, referring to the state’s “smart investments” in the technology and innovation sectors. She specifically referenced Governor Hickenlooper’s workforce programs and Colorado workspaces like Galvanize.

“There are opportunities here. There are magnets of jobs and futures that people are drawn by… The rest of the country can learn a lot about what is working here.” 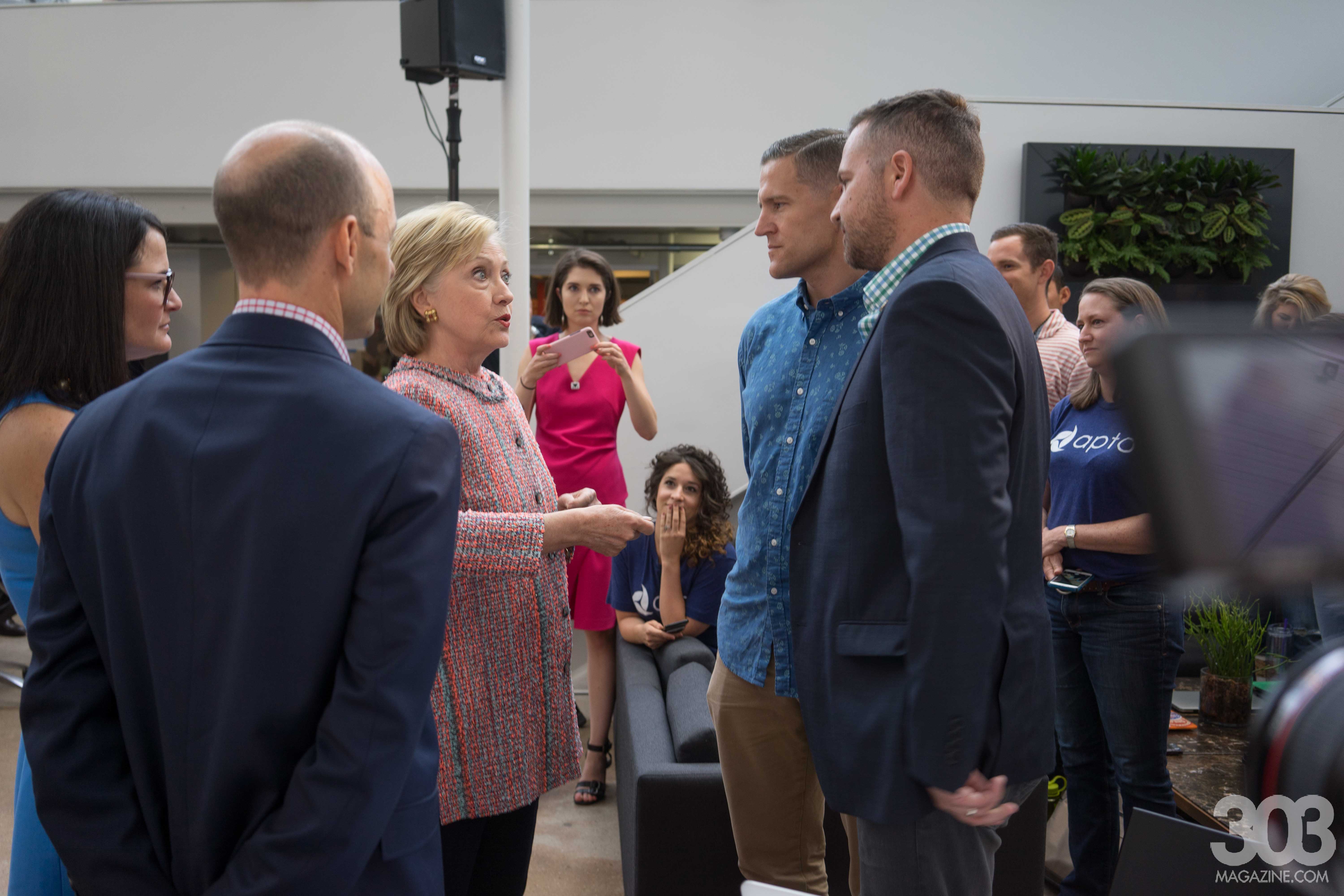 “It’s not an accident that in Denver, and Colorado in general, have a lower than average unemployment rate,” said Clinton. “There are opportunities here. There are magnets of jobs and futures that people are drawn by… I learned that nearly a quarter of the people in and around Denver and Colorado springs now work in S.T.E.M. fields… The rest of the country can learn a lot about what is working here.”

She explained she was impressed by Galvanize’s model of tech campuses and co-working spaces and wants to “do everything I can to help lift it up and create more pathways for more people to have these opportunities.”

Clinton then elaborated by announcing she is releasing a comprehensive plan to keep America on the cutting edge of technology and innovation.

“It is one of our biggest assets and I want it to be democratized,” Clinton said in reference to technology and innovation.

Her plan includes allowing student loans to be refinanced at current rates, and as well as giving young entrepreneurs the ability to defer payment for the first three years of their business and loan forgiveness if the business is successful.

“I want every home and business to high-speed internet on as fast of a time scale as possible, no later than the early 2020s.” 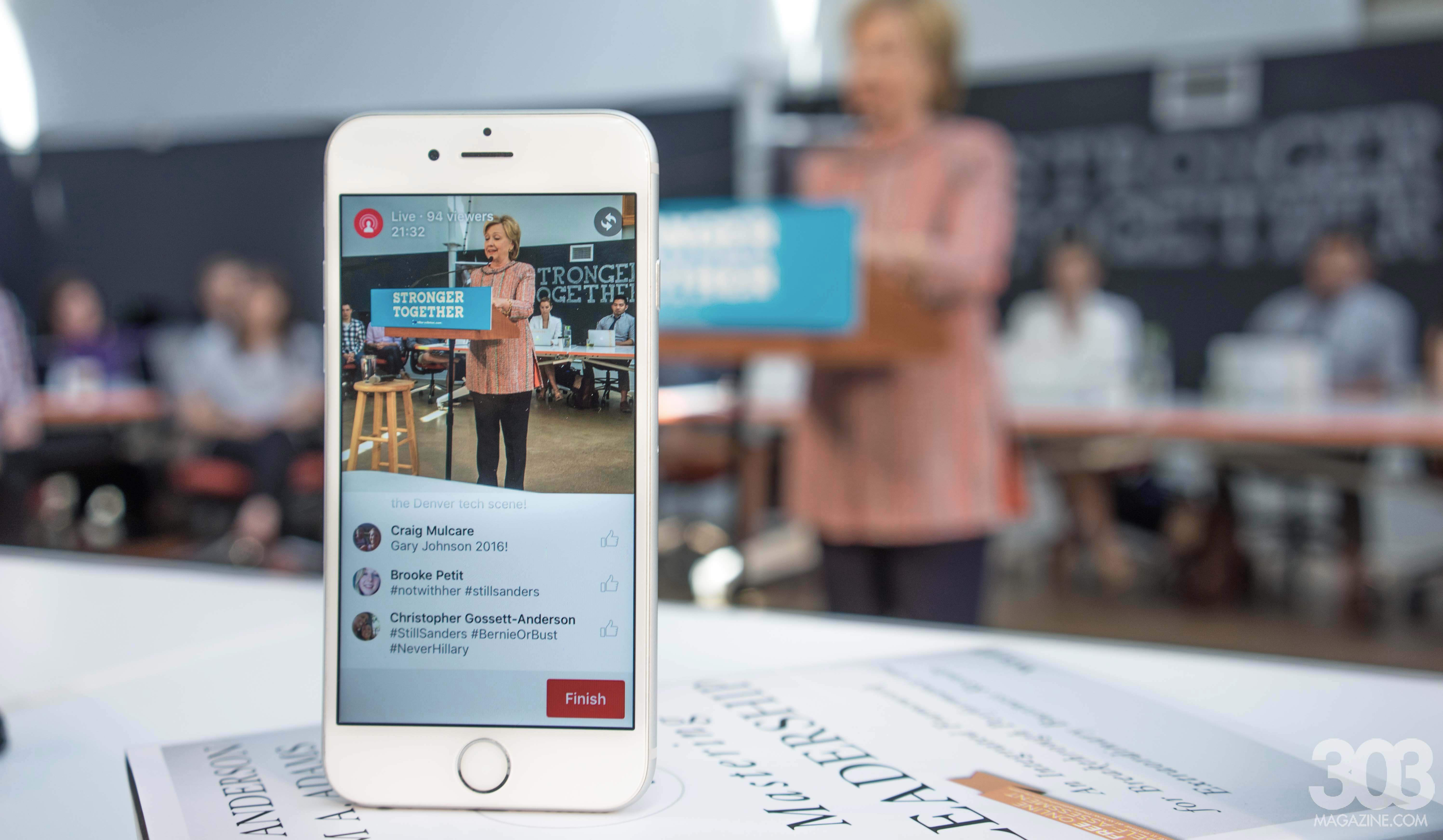 Clinton through the lens of the internet.

“If you get an enterprise up and running, we want to forgive a portion of that debt, because now you’re a job creator and we need more young job creators,” said Clinton.

Her second point focused on high-speed internet, calling the lack of access to broadband internet, “an economic impediment.” She explained that her plan would connect “every home and business to high-speed internet on as fast of a time scale as possible, no later than the early 2020s.”

Similarly, she claims she would strive to integrate computer science into every school so “every student in American can get the chance to learn computer science before they leave high school.”

Clinton explained that these plans will help increase the availability and opportunity for more high paying jobs, something she believes will be “the defining issue” of this election.

The former Secretary of State took one question from the press and responded to questions about the House Select Committee on Benghazi report released today.

“It found nothing, nothing to contradict the conclusions of the independent accountability board, or the conclusion of the prior multiple earlier investigations carried out on a bipartisan basis in Congress,” said Clinton.

Clinton did not take any further questions and only referred to her political opponent, Donald Trump, once explaining that the slogan “Make America Great Again” is a campaign built on a return to the past:

“[It] forgets about technology, forgets about inclusivity, forgets about giving everyone an opportunity for a shot at the best possible future,” said Clinton. “I want America to get back into the future business…We don’t go back. We go forward.”

Clinton left Galvanize around noon and headed to another event in Los Angeles. Trump is scheduled to appear in Denver on July 1 to speak at the Western Conservative Summit at the Convention Center. Sarah Palin is expected to be there as well. Go here to view our live video of the event. 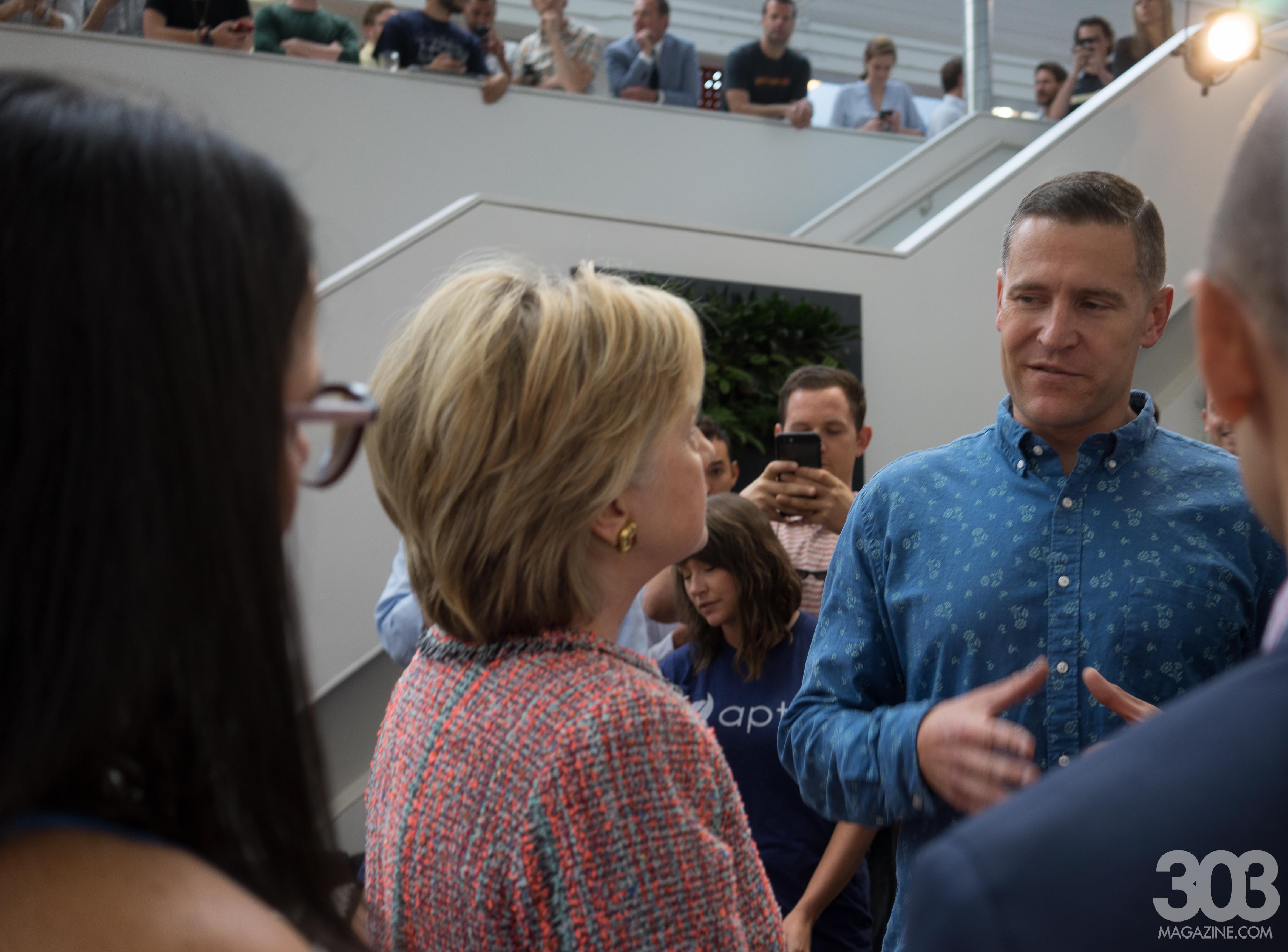 Clinton speaking with a Galvanize representative. 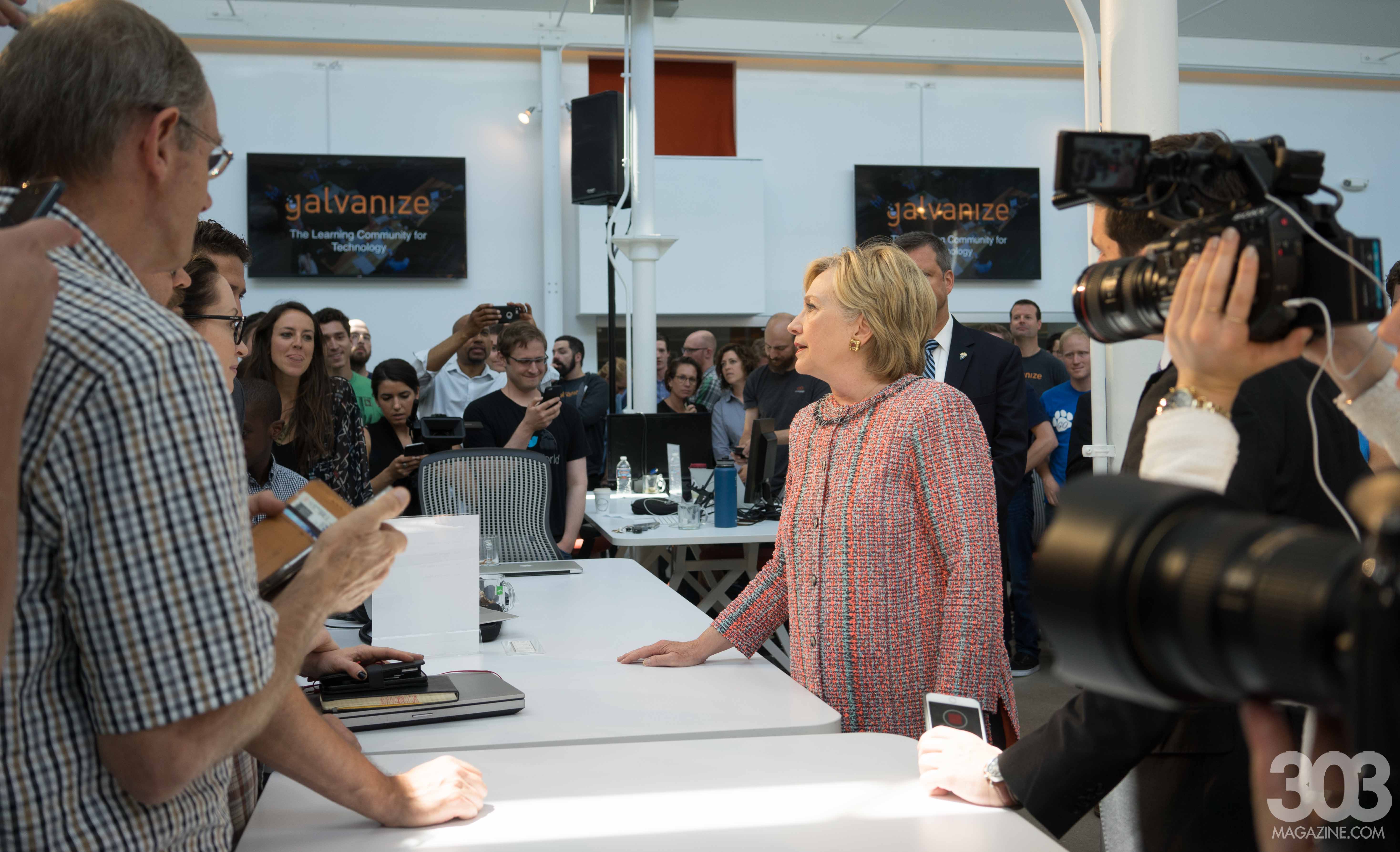 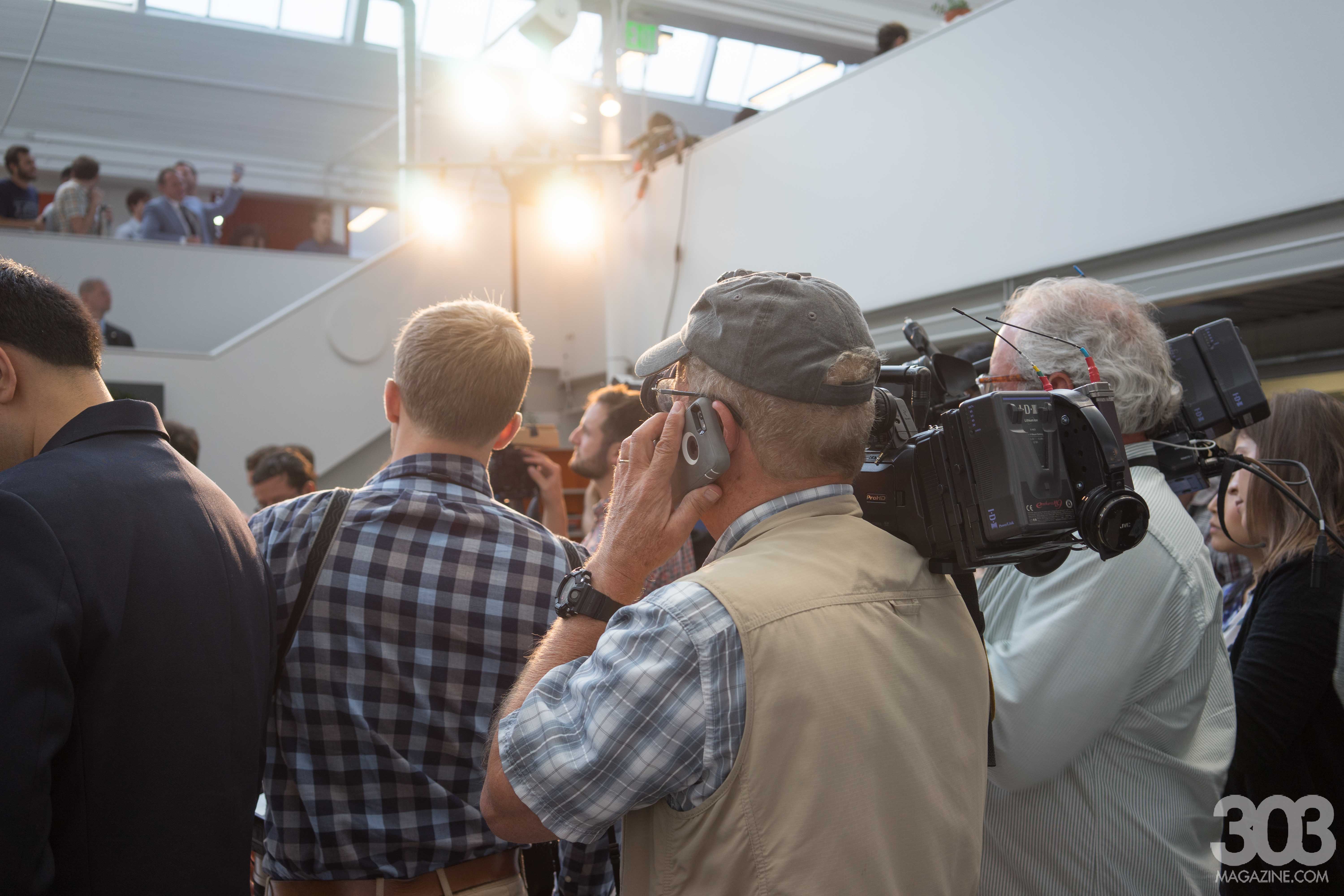 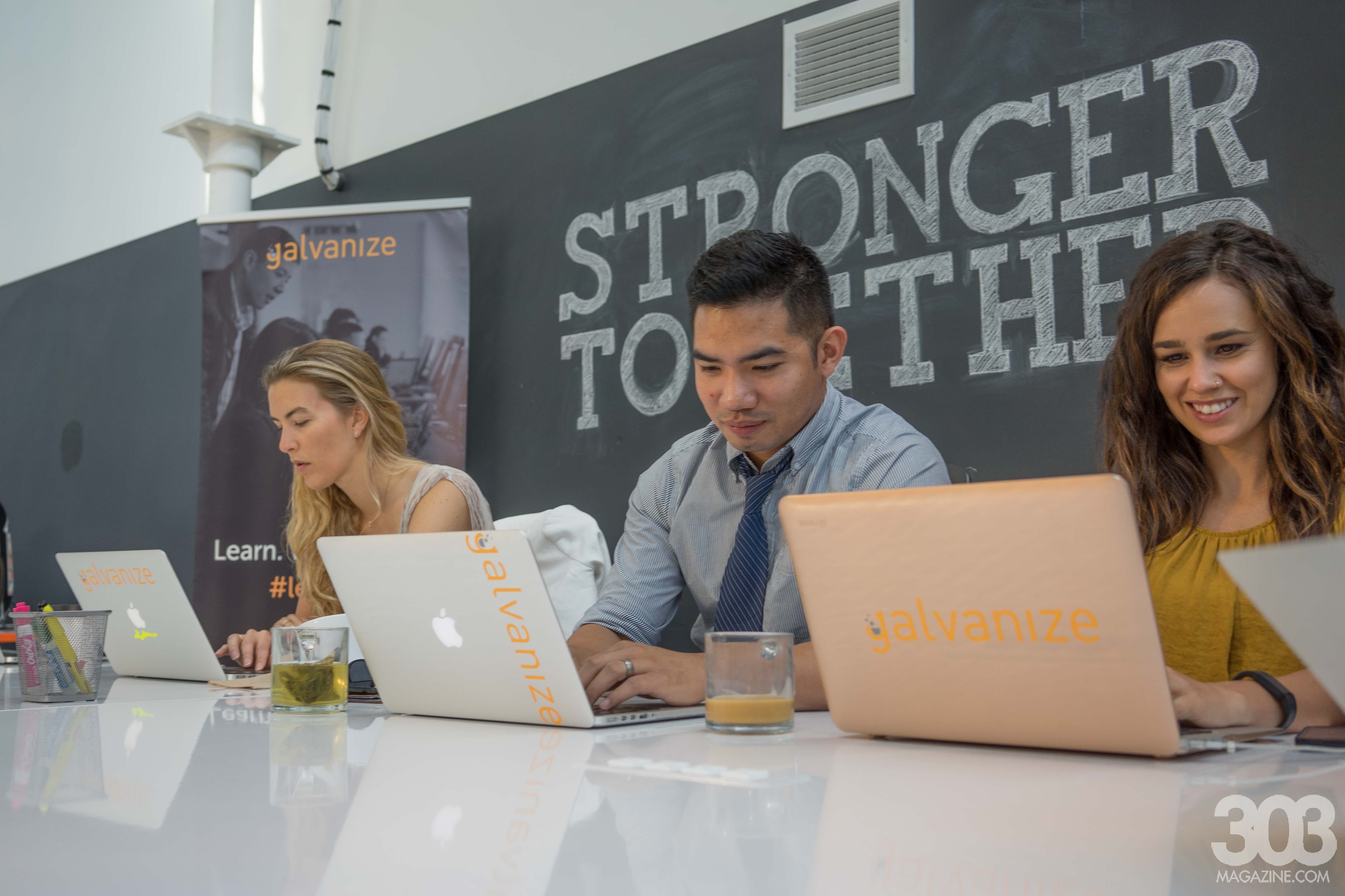