Lighting up a Ghost Town with Colorado Artists Knomad Colab 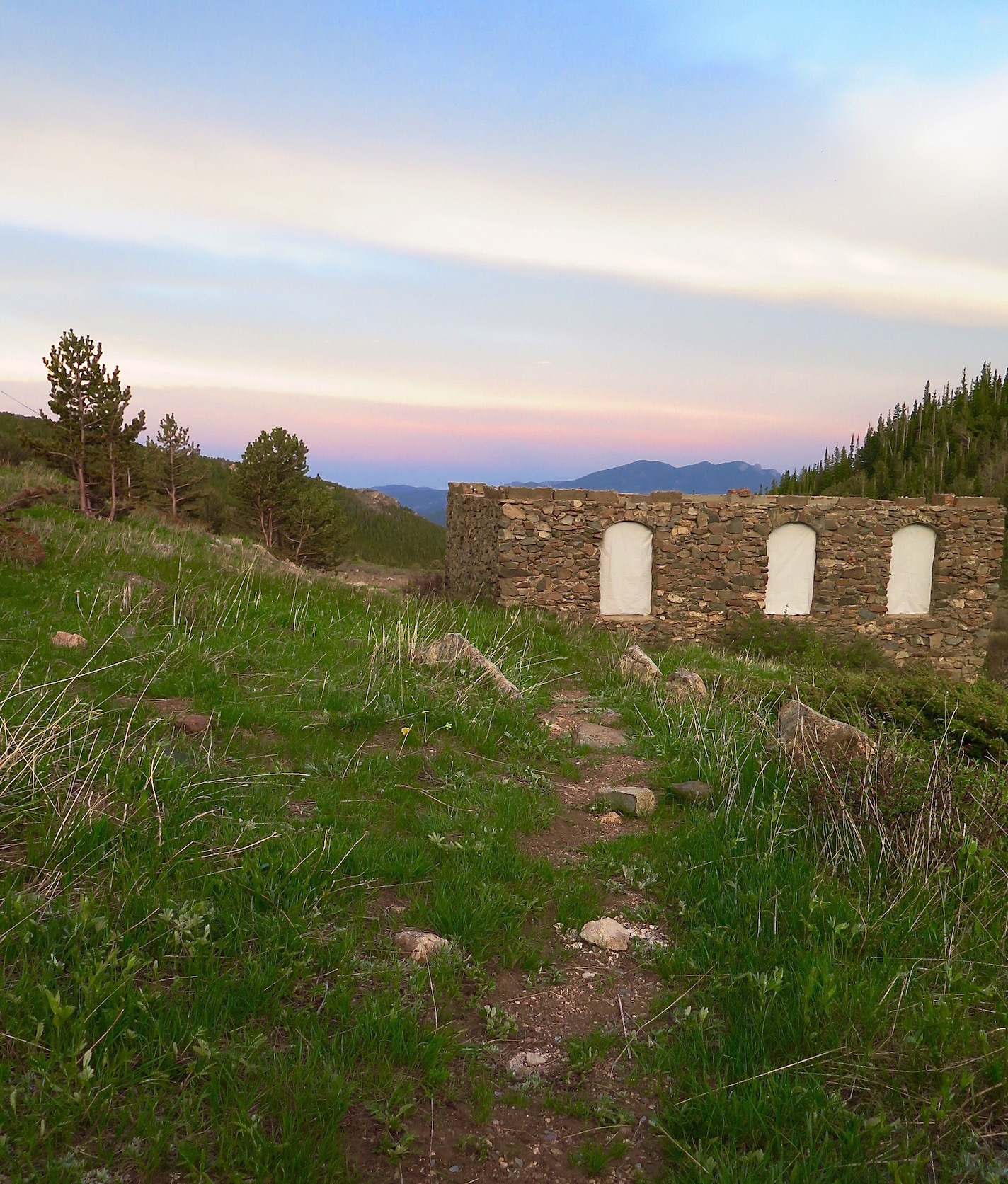 Looking east toward Nederland from the other Caribou ruin. Photo by Cori Anderson

Instead of reaching out to galleries, Knomad researches places. Each installation is unique to a space and often relates to its history in some way. Vacant or dilapidated structures and natural landscapes are the canvasses for these audio–visual art shows because they tend to evoke a sense of contemplation, “a reflection of what was, what is, and what might be” as Knomad explains. Caribou, an abandoned mining city in the mountains outside Nederland, was the chosen locale for their most recent installation titled Silver is Dead and we have the exclusive scoop.

Established in the 1870s by a prospector named Conger, the town of Caribou flourished to a size that was impressive during such rough times—about 3,000 people at its peak in 1875—spearheaded the Colorado silver rush and produced an estimated $8 million with the mine before two fires and a lack of decent ore condemned it to become another ghost town in the mountains by the 1920s. At one point Caribou boasted one church, three saloons, a brewery, a newspaper and housing for the miners, but now only two broken structures remain.

Although it may once have been more remote, this site is five (country) miles outside Nederland in an area frequented by campers and day–hikers and the occasional vandal. And there is something inherently creepy about the ruins that Katy and Zach climb on, installing portable L.E.D lights on the disintegrating foundation and hanging white canvas from empty doors and windows. We all discuss the unmistakable feeling that something lingers between the stones, an idea that stories can be integrated into environments to such an extent that that environment becomes that story. And with Caribou, the story Katy and Zach want to highlight is the short existence of the town and the destruction of it—twice!— by fire.

“The purpose of light is to create more light, to open people’s eyes, to reveal the marvels around.”  Paulo Coelho 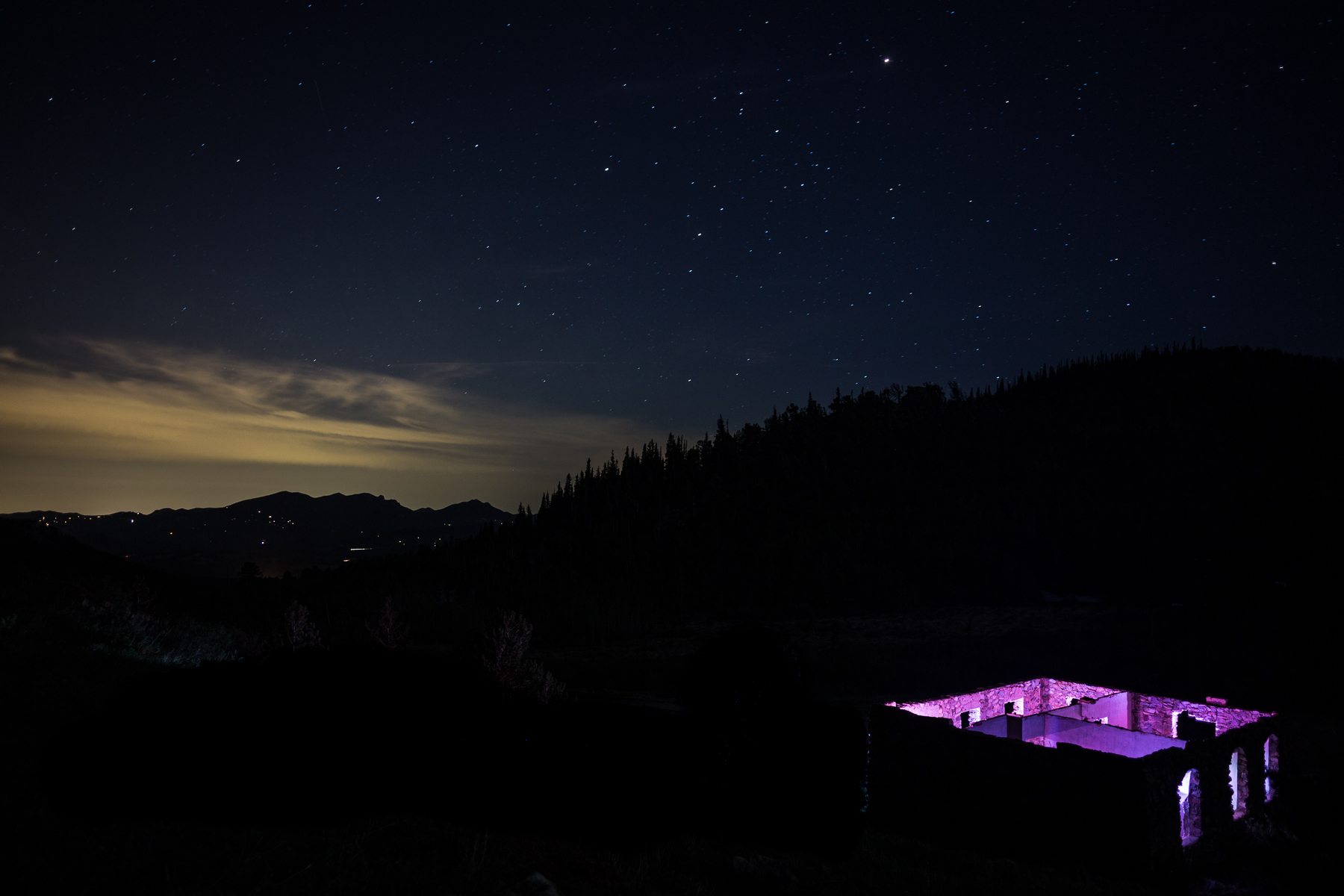 Everything must be situated before dark. And situating in these environments is a lot of trial and error, especially when you are “painting with lights” as Katy explains it. They are both nimble, scrambling up and down the crumbling walls, handing each other equipment while communicating in a jargon it seems they have created. As they move about the ruin, the sun slowly sets and with each passing minute the colors from the lights begin to appear. Only a few minor adjustments are made, less than one might expect. Imagine using transparent paint to create an entire picture that you only get to see after hours of work and you will have some idea of the talent that Knomad possesses in this medium.

It is fascinating to see this old building come alive as the rest of the world goes to sleep. Part of the effect Knomad wants to create with the lights is a flicker that resembles fire—something that does not come across in any of the photographs—and they nail it by sequencing their lights to shut on and off in varying combinations of red, blue and orange. Something else that is missed in the photographs is the audio accompaniment of pre–1890s music obtained from the Library of Congress which represents music that would have been played in one of the town’s three saloons at the time of the fire.

With the sun down, the lights up and the music on, the ambiance of this installation is surreal—a beautiful haunting. The marriage of technology and nature creates another world, one that you do not belong to, but one that infects you with a sense of longing. Especially with the parlor tunes coming from one of the covered windows in what used to be this building’s basement, it seems as if this place is once again inhabited, beckoning you to come inside where it looks warm and inviting. 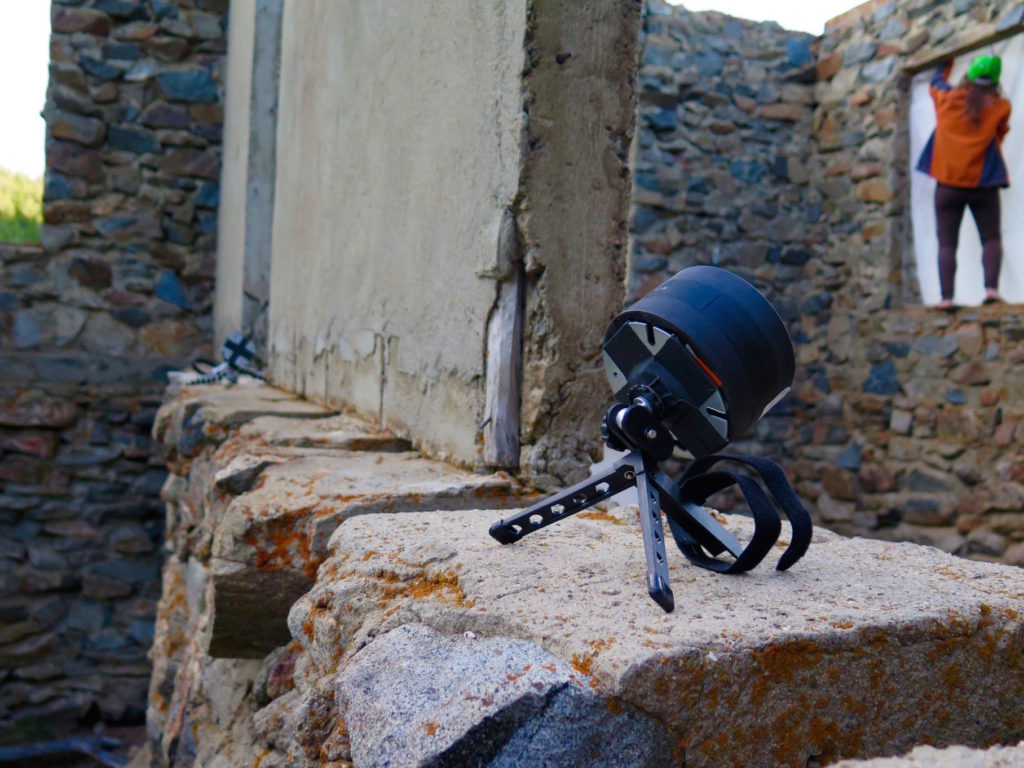 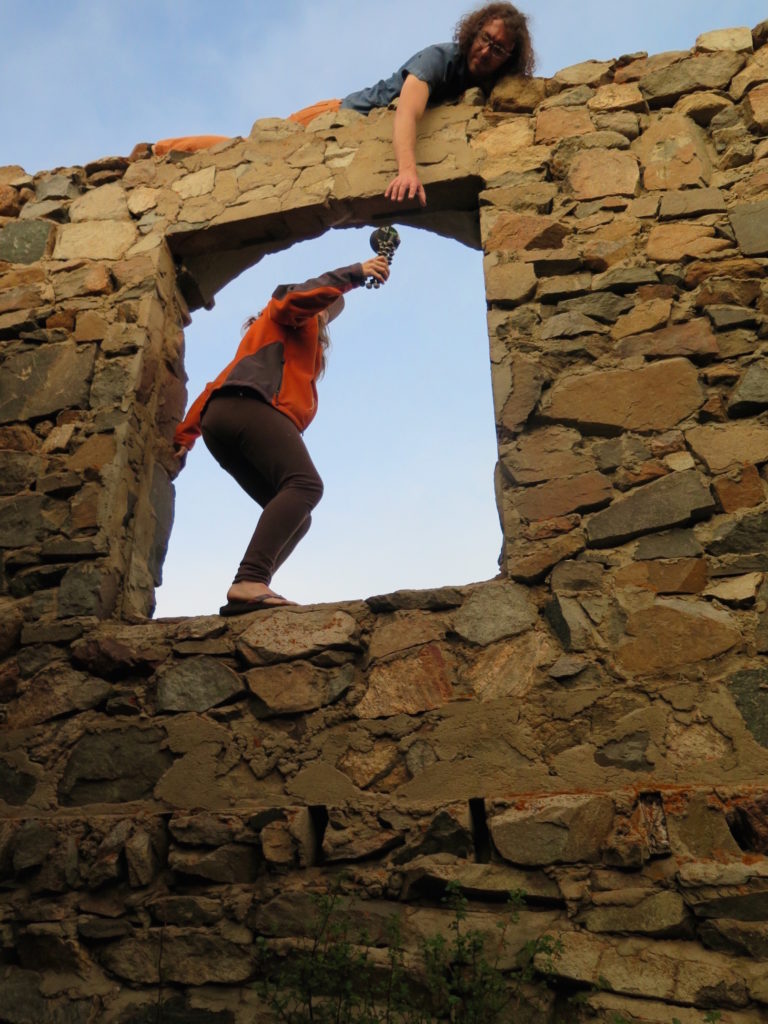 Katy hands Zachary a light for the ceiling. Photo by Cori Anderson

“We seek to create art work, which is actively felt rather than passively viewed.” 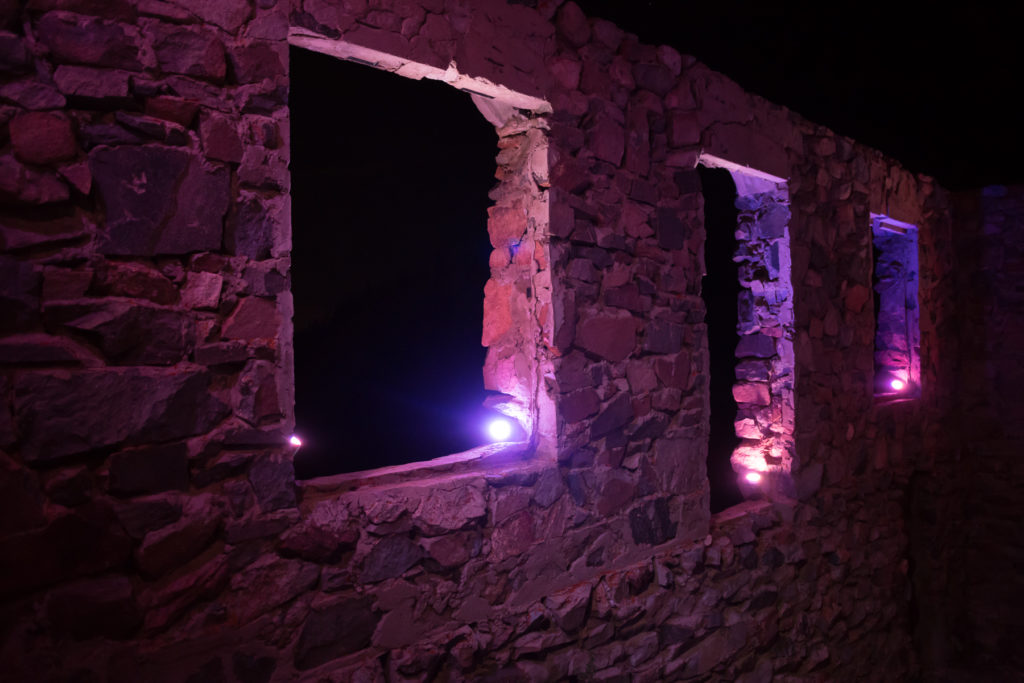 From inside the building. Photo by Zachary Christopher

These outdoor light installations are Knomad’s way of crossing boundaries in the art world, or more appropriately crossing boundaries out of the art world and into the natural world. Tired of the stingy feeling that experiencing art is standing a few feet away from it hanging on a wall in a climate—controlled room, they aim to create an immersive experience that rethinks where we should be cultivating our artistic endeavors. “Our mission is to continue harvesting art experiences outside the confines of the traditional gallery space that engage a broader community. We seek to create art work, which is actively felt rather than passively viewed.”

Although this site was in an area of lower traffic than their other endeavors, there were some lucky campers who drove by just at the right time and it is that kind of serendipity that makes these installations so enchanting. They are fleeting, and with that impermanence, they carry a weight that concrete art cannot capture—the very meaning of life and its briefness. 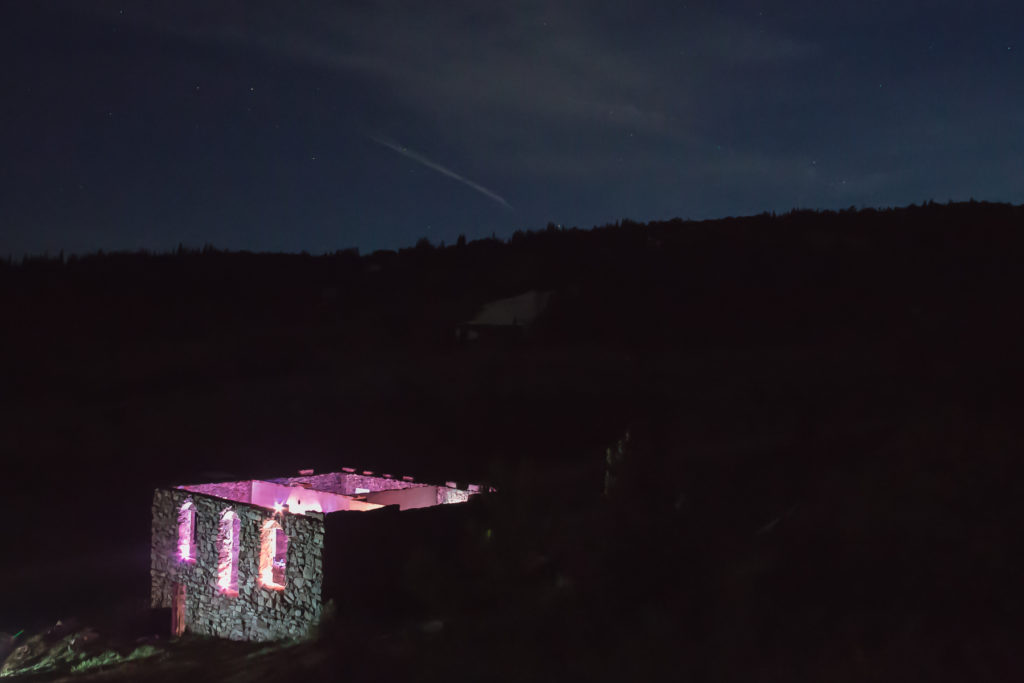 Where to find more

You should want to experience this for yourself. Check out their website for images of past installations and to order prints. Here you can sign up to be on the email list, where you will be informed of any future outings. Also follow them on Instagram— @knomadcolab. And if you like what Knomad does and want to continue seeing them do it, consider donating to their Patreon to help them “continue to move forward with new and unique applications of light and sound.” 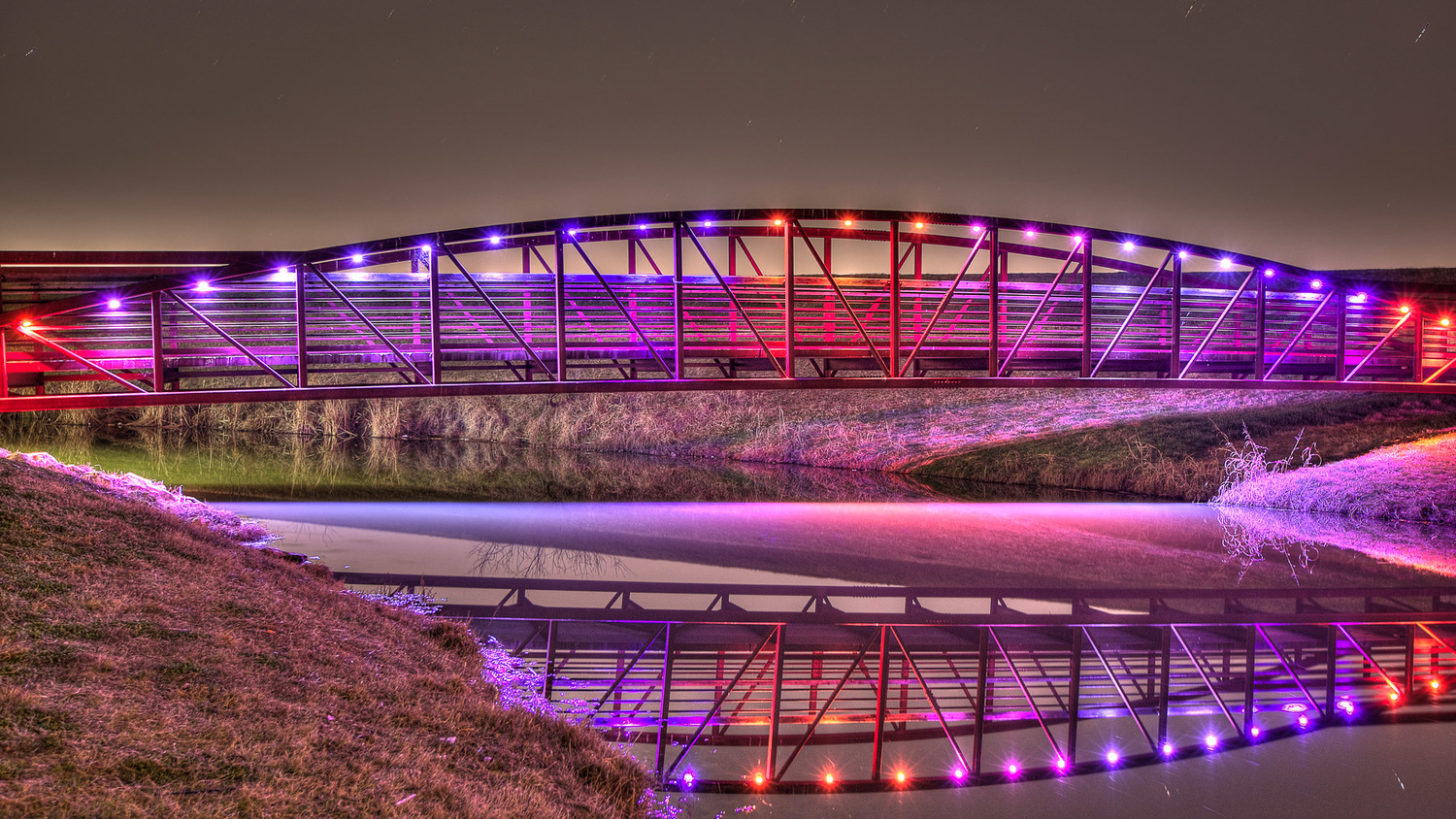 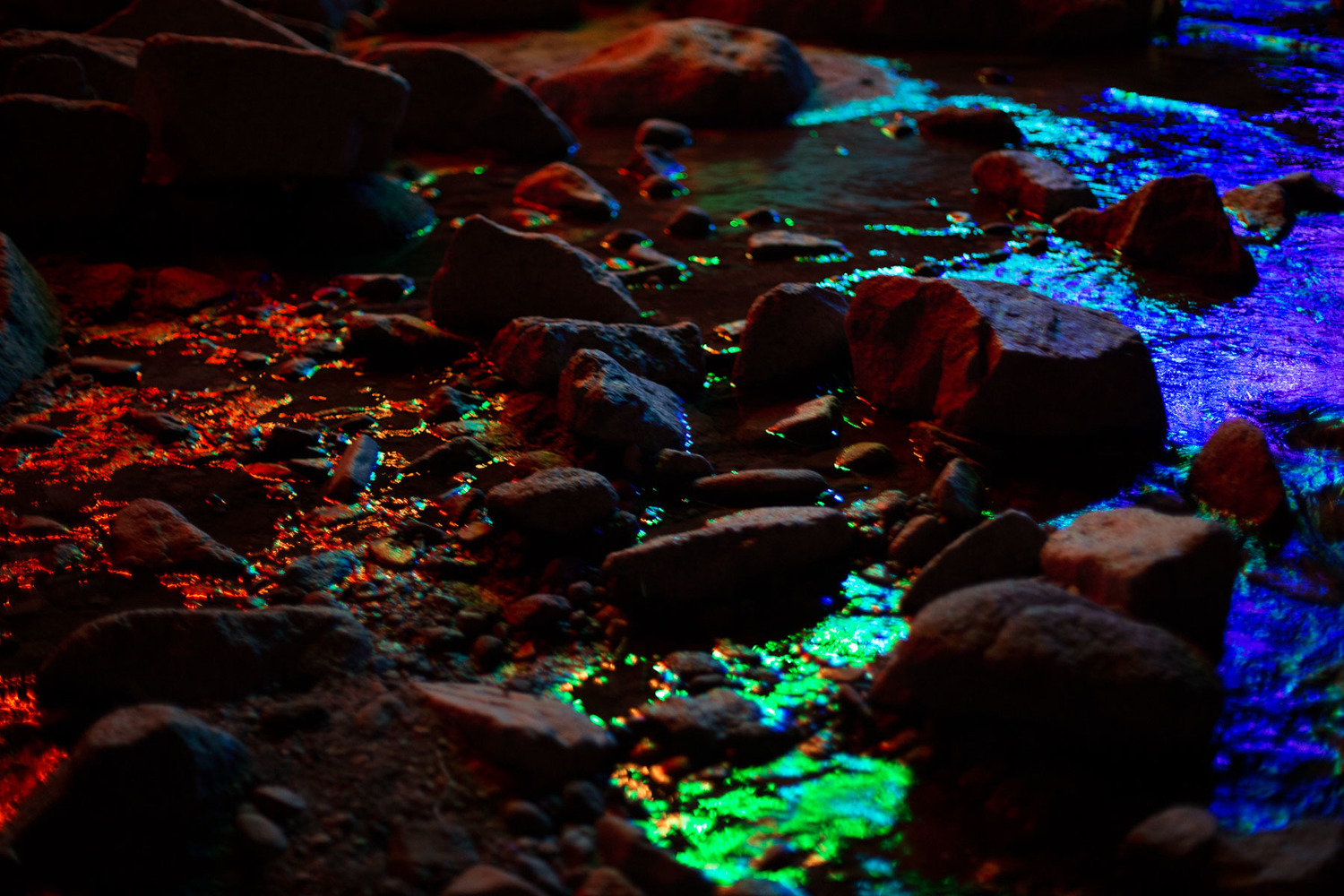 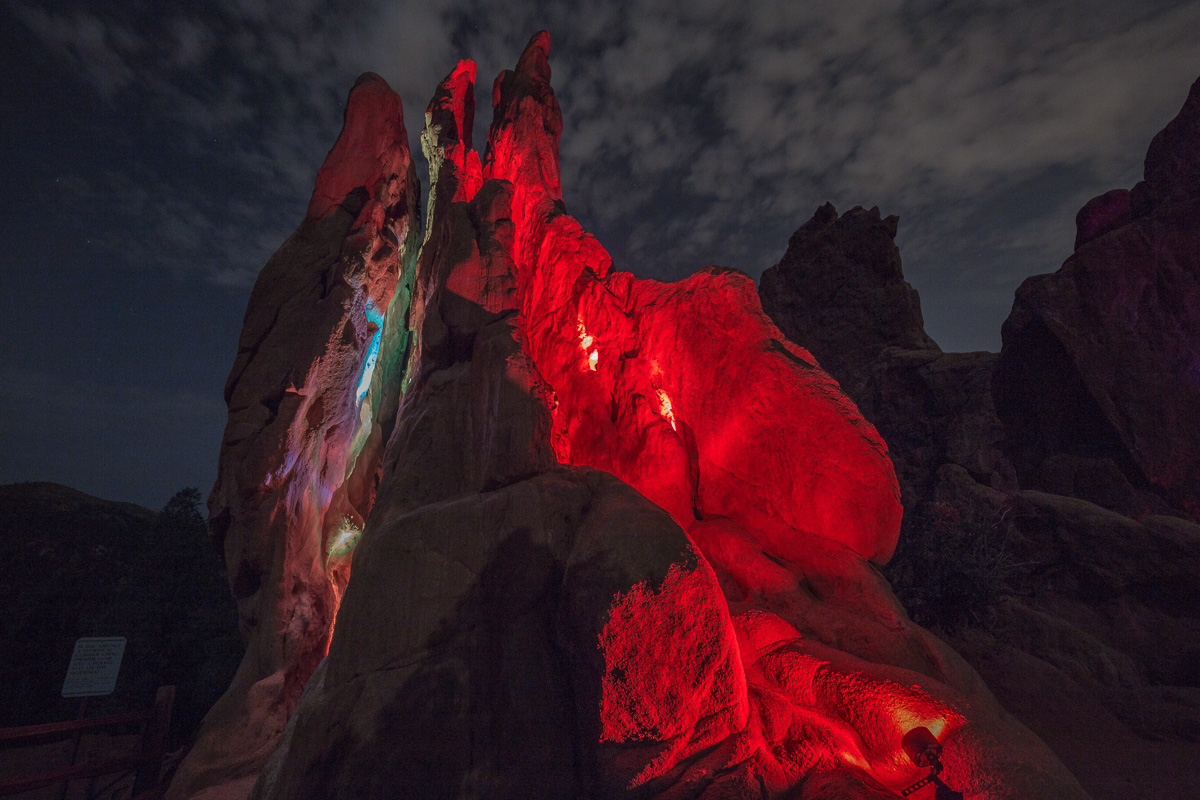