303 Street Style – Denver Pridefest as Colorful as Ever

Denver Pridefest took place this past weekend at Civic Center Park, from June 25 – 26. Hosted by The Center as an independent festival for the people of Colorado, Denver Pridefest is a celebration of love and expression. The gathering takes place every year during Father’s Day weekend, complete with street vendors, stage performers, and a lively parade on Sunday morning. But this year’s event was particularly special, with event goers still distraught by the Orlando shooting a week earlier. While this had caused an air of gloom over the LGBTQ community, it didn’t stop event goers from dressing up, having fun, and showing their Pride.

303 Street Style – Denver Pridefest as Colorful as Ever 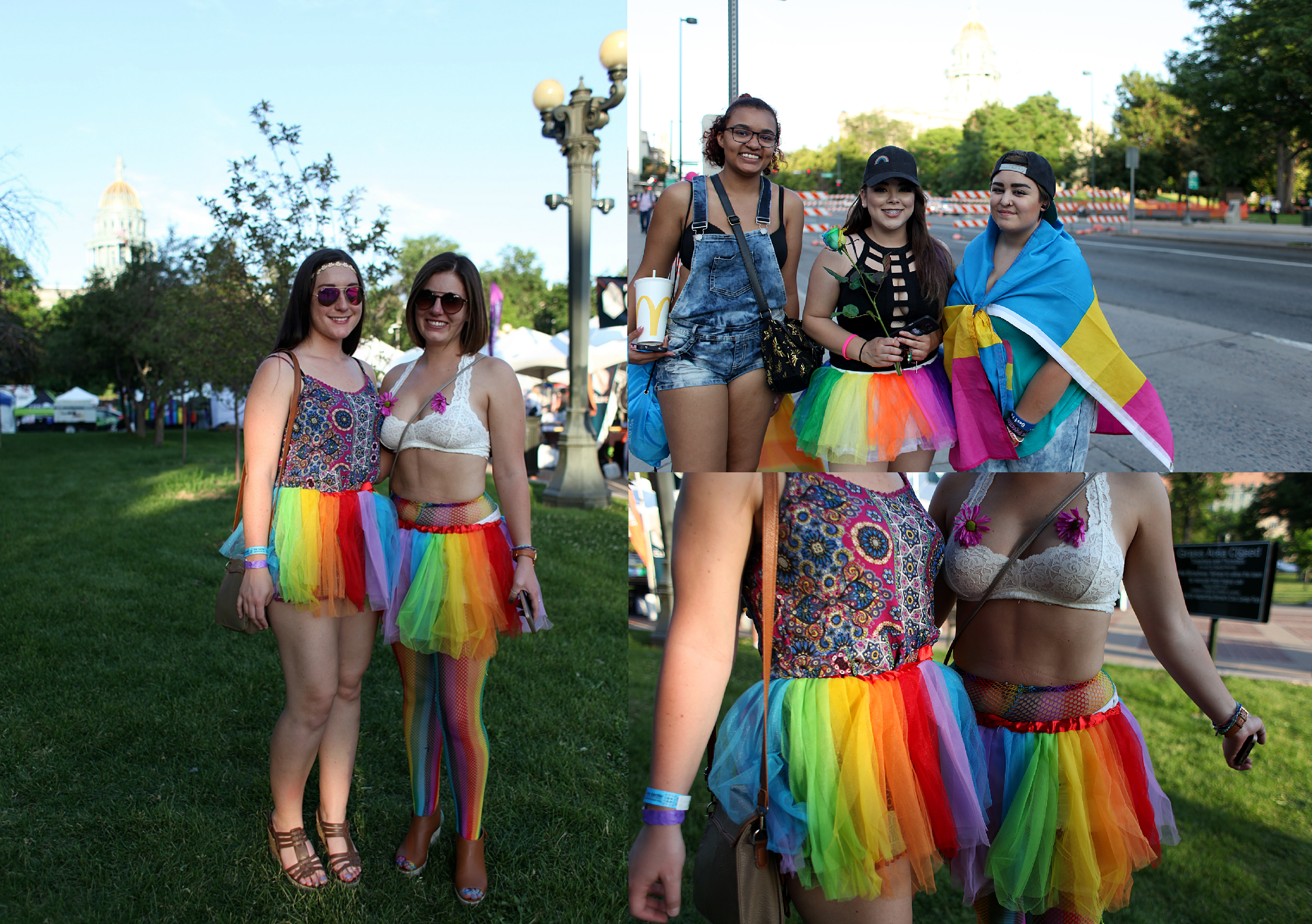 DIY tulle skirts seemed to be the go to look. – All images by Francesca McConnell

Denver Pridefest is probably the most colorful event in Denver. With the rainbow flag being the symbol for those in the LGBTQ community, it’s no surprise that a plethora of color ran rampant at Civic Center Park. But one that really impressed us with this year’s crowd was the amount of work and time each individual put into their looks. The DIY aesthetic seemed to be strong, with tulle skits as this year’s popular item. Easy to make and good in the heat, most event goers hand made their skirts. While some used sewing skills to complete their looks, and others a hot glue gun, the overall expression really came through. 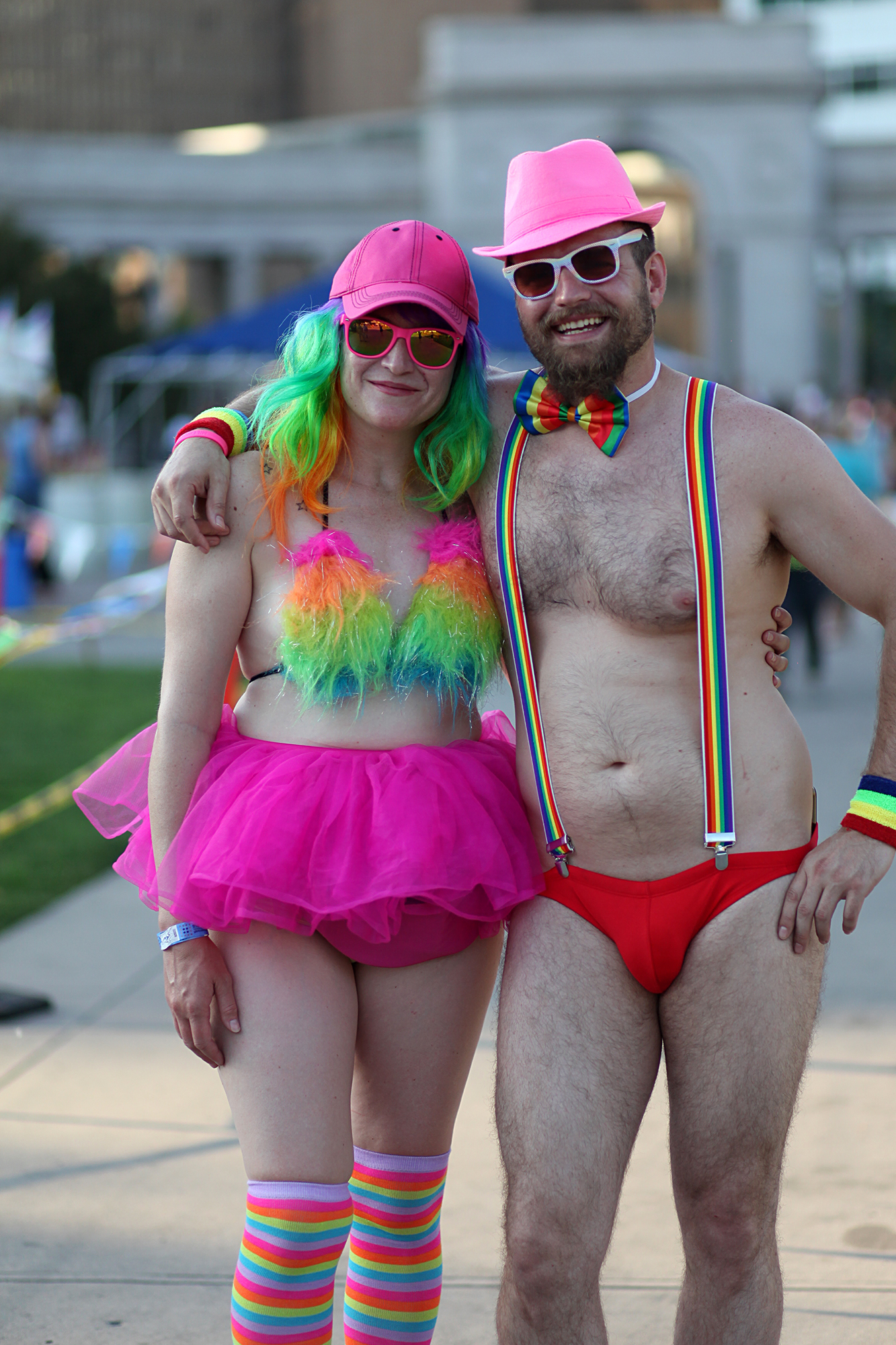 Two event goers escaping the heat in anything but modest costumes.

With temperatures nearing the 100 degree mark, it’s no surprise that some event goers adopted the idiom “less is more.” But these girls and guys weren’t dressed up in your generic underwear, they utilized color and accessories to amp up the look. One man donned rainbow suspenders, wrist sweat bands, and a bow tie, making sure to cram in as many rainbows as possible without adding layers to escape the heat.His friend seemed to have the same idea and used rainbow in as many places as possible, while still showing off skin. A fur bralette added texture to the look while rainbow, knee high socks kept the theme going. But this event goer really took it to the next level with a rainbow wig, that we’re sure, wasn’t too comfortable in the heat.

The “free the nipple” movement was alive and well at Denver Pridfest 2016.

While some event goers showed lots of skin to escape the heat, others used it to make a political statement. The “free the nipple” movement seemed to be quite relevant this year, with women showcasing what god gave them. Of course it’s still illegal for women to be topless in Colorado, so the use of “sensor” like stickers were carefully placed to keep things legal. One event goer opted for a rainbow sticker complete with a marijuana leaf to show her pride of the LGBTQ community and her home state Colorado. Another event goer chose the same set of stickers, but used a rainbow flag to be a bit more covered up.

All photography by Francesca McConnell 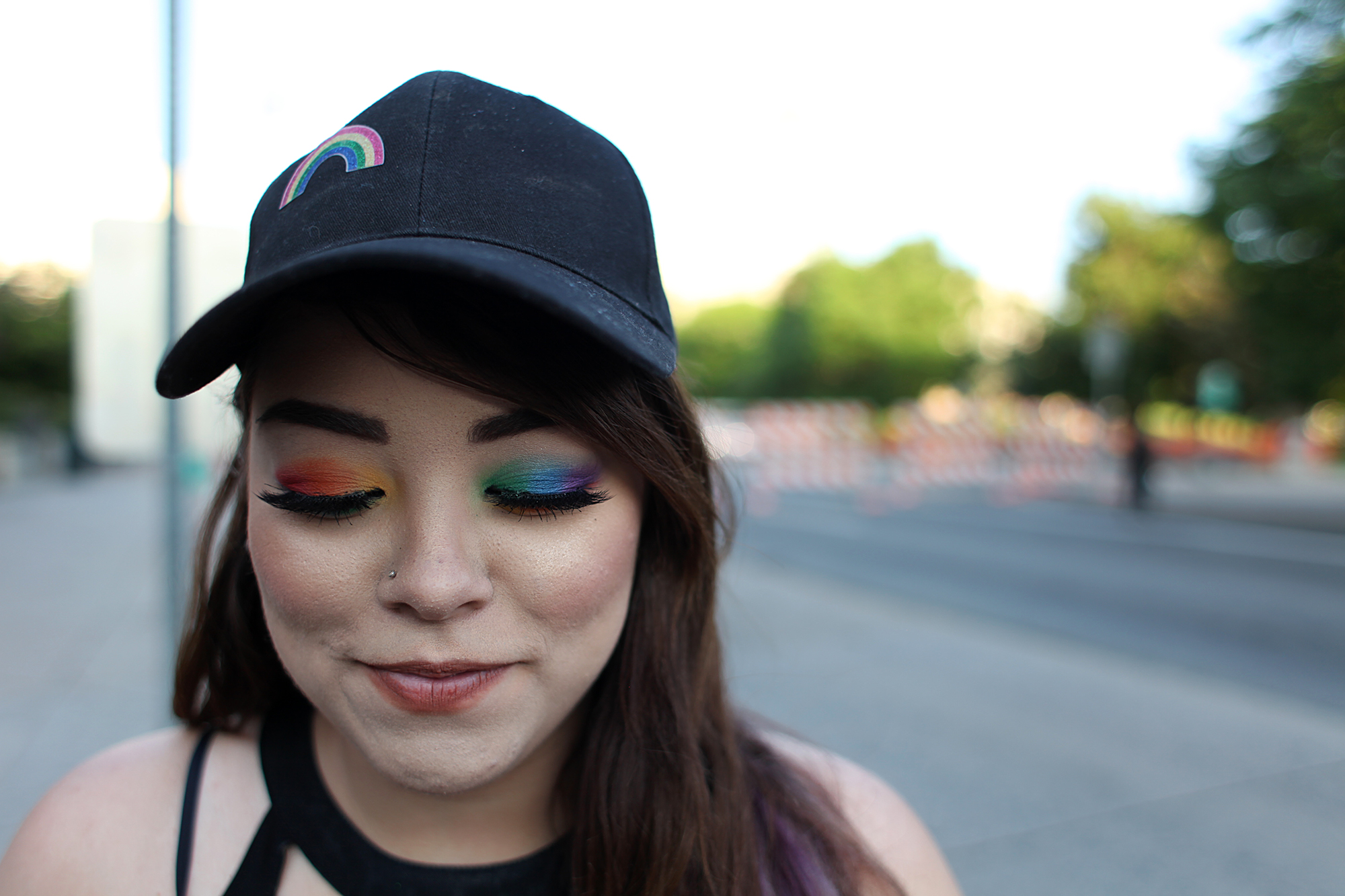 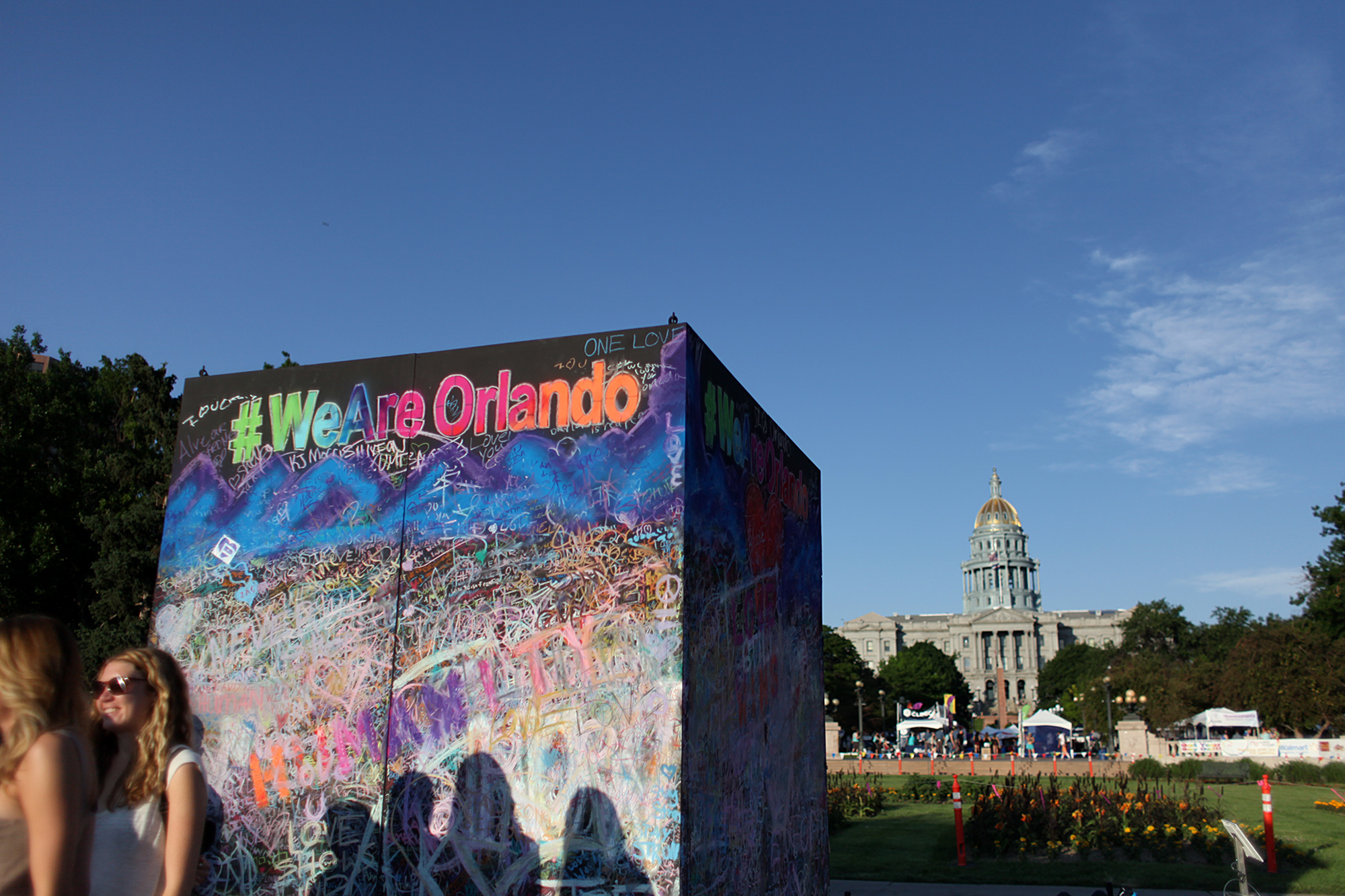 A monument erected to honor lives lost during the Orlando shooting. 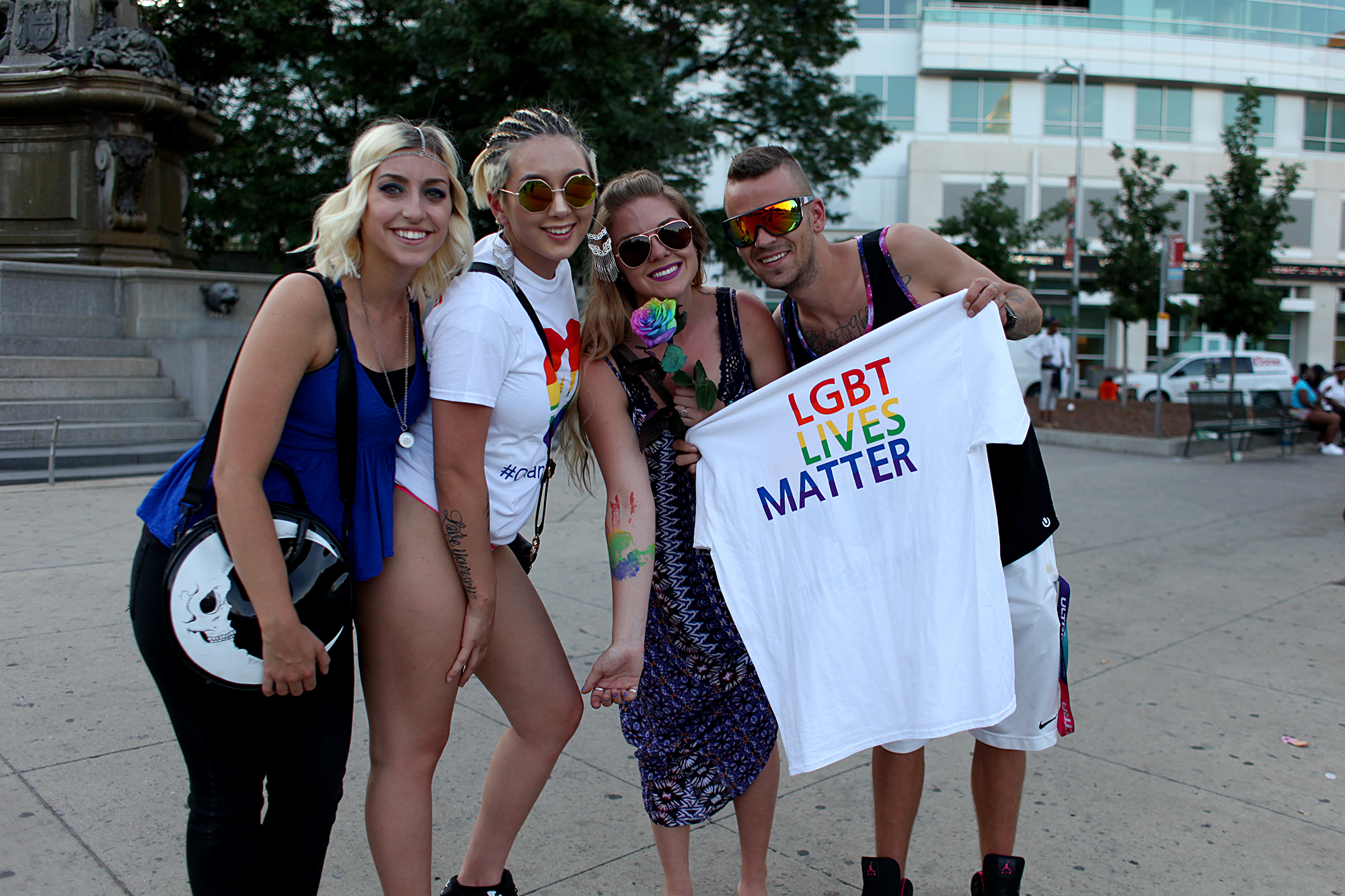 A group of friends at Denver Pridefest supporting the local LGBTQ community.