No sex, no drugs, no vagina closeups or heroin, not even the lions, tigers or bears–The Flaming Lips cleaned it up for this performance at Red Rocks with the Colorado Symphony Orchestra. Legendary frontman Wayne Coyne still swore like a sailor though. 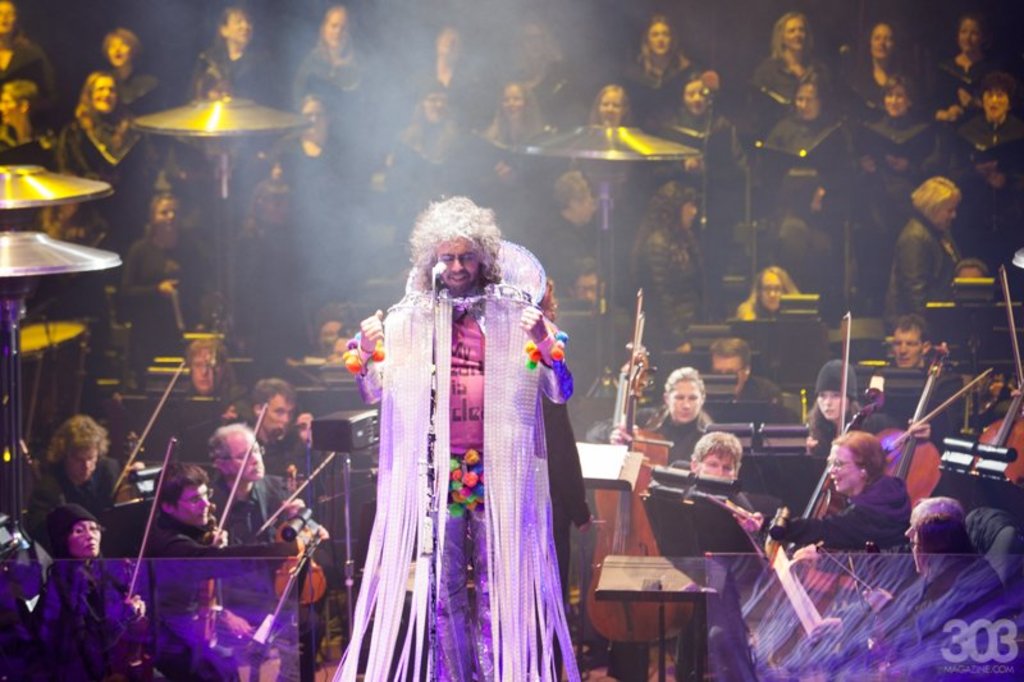 When The Flaming Lips announced that they would be performing acclaimed album The Soft Bulletin in its entirety with the Colorado Symphony Orchestra, music fans lost it. Not only were critics and the industry excited, but fans of the Lips were flabbergasted. How amazing it was to learn that not only would we be seeing these theatrical and renowned performers at Red Rocks, we would be seeing them with the CSO–”a badass group of musicians who absolutely love this music” as Wayne described.

“The Soft Bulletin has been big for the longest time. People will ask, what does it mean? It really has a secret unspeakable meaning about it … At virtually every show we’ll run into a couple of people and we won’t be able to say what it is. But we know the same thing.” – W.C.

This isn’t the first time The Flaming Lips have done this–they performed The Soft Bulletin in its entirety in Oklahoma City for NYE in 2010 as well as  performing other full-albums in other locations. There’s an immense appreciation for this technique in the world of music–breaking away from the radio-frenzy of singles and refusing to just play the hits. As fans, it’s important to appreciate albums as a whole for what they are, and I believe this is exactly what the Lips were trying to accomplish. 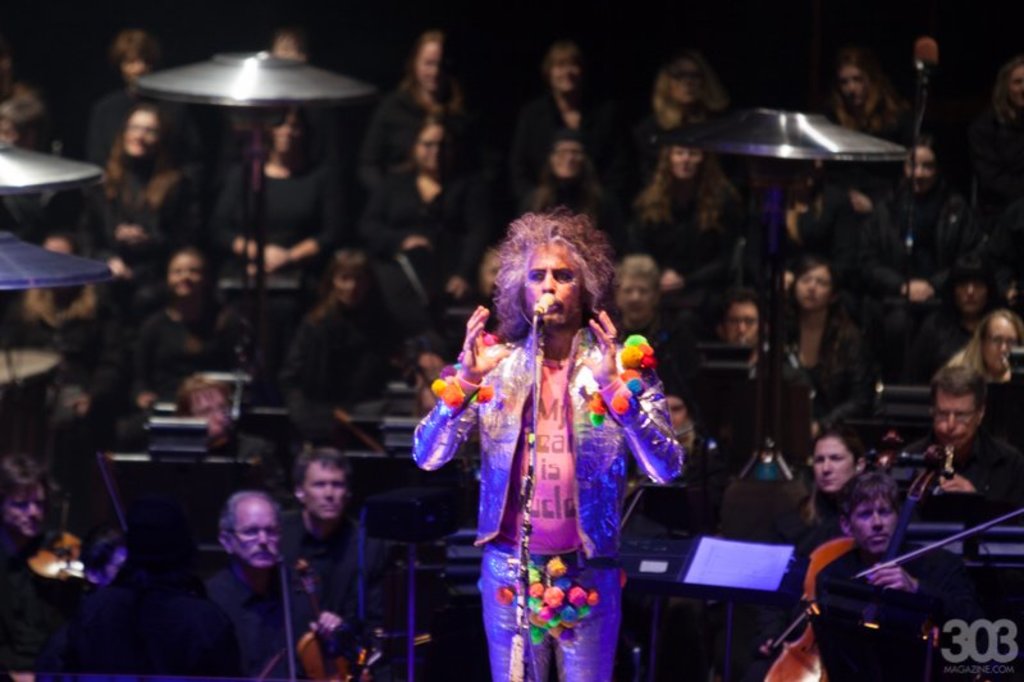 Early on it seemed as if the weather was going to be a bit horrid for the evening. After a days worth of tornado watches, rain and lightning it was looking like fans would have to bear through it all to catch this historical performance. What everyone was forgetting is the power and magic of not only Red Rocks Amphitheater, but also the colorful Flaming Lips. As if the gods approved of this performance and wanted to watch themselves, the clouds cleared up just moments before the symphony walked onto the stage.

“There was a lot of fear about rain and we said we don’t give a fuck about the rain. And they [the CSO] said, ‘Wayne what do we do if it starts raining’ and I said [chuckling], ‘We’ll keep fucking playing.’ And so yeah, we’re all prepared.” – W.C.

The orchestra was conducted by André de Ridder and the ensemble opened with a piece titled “New World” from the 1890s. It was truly a beautiful opening for the show as the sun began to sink below the horizon. After the symphony finished warming-up, Wayne walked onto stage and introduced the show–as soon as he could get the audience to calm down. He announced that the concert would be recorded live for audio (and judging from what they’ve done in the past, probably visual as well) for this once-in-a-lifetime performance. 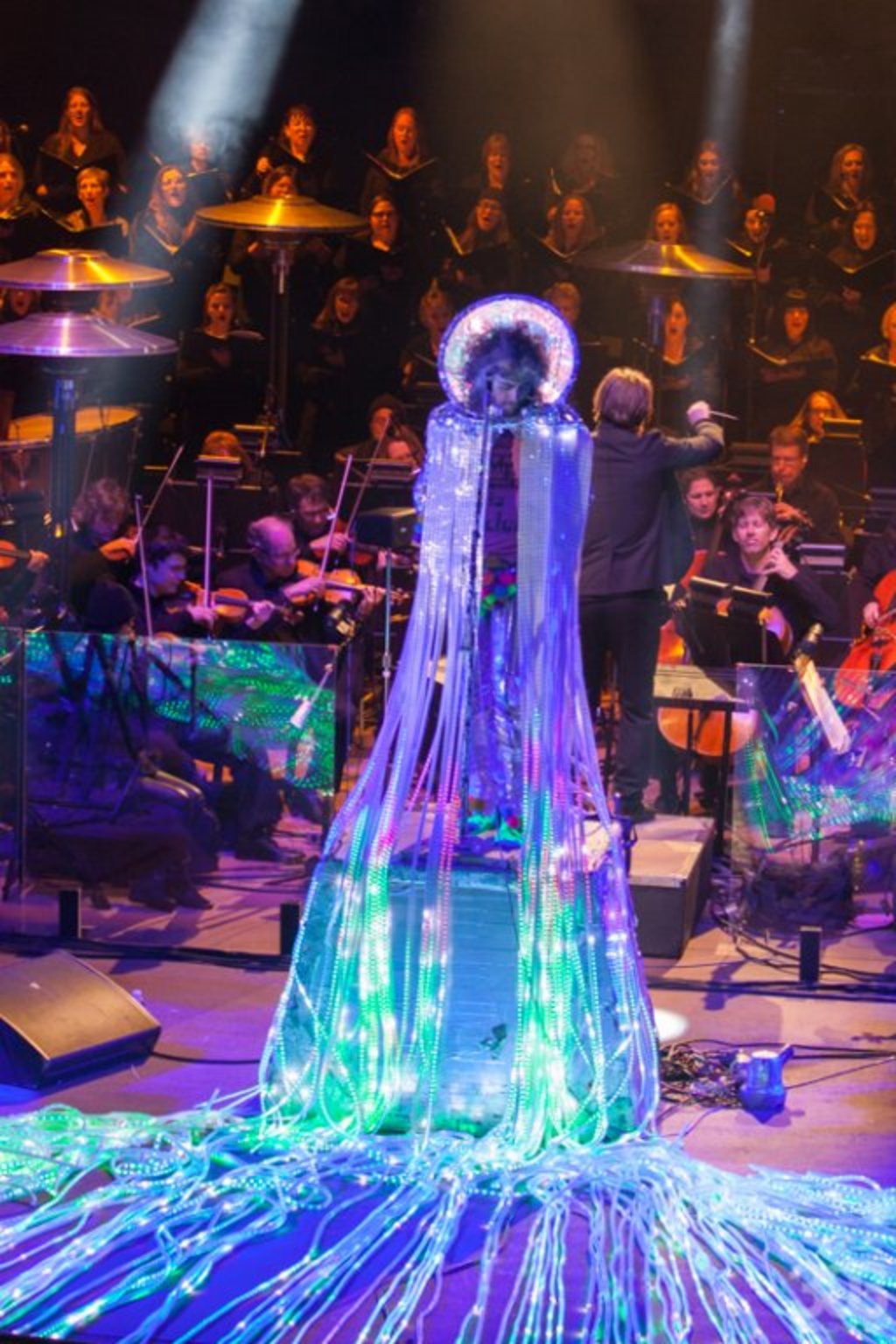 “Should we just begin, Andre?” Wayne asked, following with the abrupt start of this incredible collaboration. Wayne’s attire lit-up wearing strings of multicolored lights that flowed from his shoulders, down the podium he stood upon, onto the stage and beyond accompanied with the usual illuminated helmet. He resembled some sort-of cosmic Jesus. Pairing the Lips with the ensemble, the stage presence was  enormous. It was truly phenomenal to see so many talented musicians all working together on the Red Rocks stage.

As soon as the crowd started thinking there wouldn’t be any inflatables during the set, a giant rainbow began to grow at the front of the stage for hits “What is the Light” and “The Observer.” The crowd went nuts for this one and soon-after Wayne giddily said, “I have to say there was a moment where I doubted the rainbow. And then it fucking worked so beautifully. And that’s what I get for having just a millisecond of doubt about the rainbow. If there’s one thing we know: never doubt the rainbow.”

Their arguably most popular song on the album, “Suddenly, Everything has Changed” brought the crowd together in a wonderfully collective sing-a-long. Offering a hint of inspiration behind the tune, Wayne said, “there’s moments within this song that we try to overcome this peak of sadness. And music will help us get there.” Overall the performance felt astonishingly spiritual and was absolutely mesmerizing–this moment being the peak of it all. 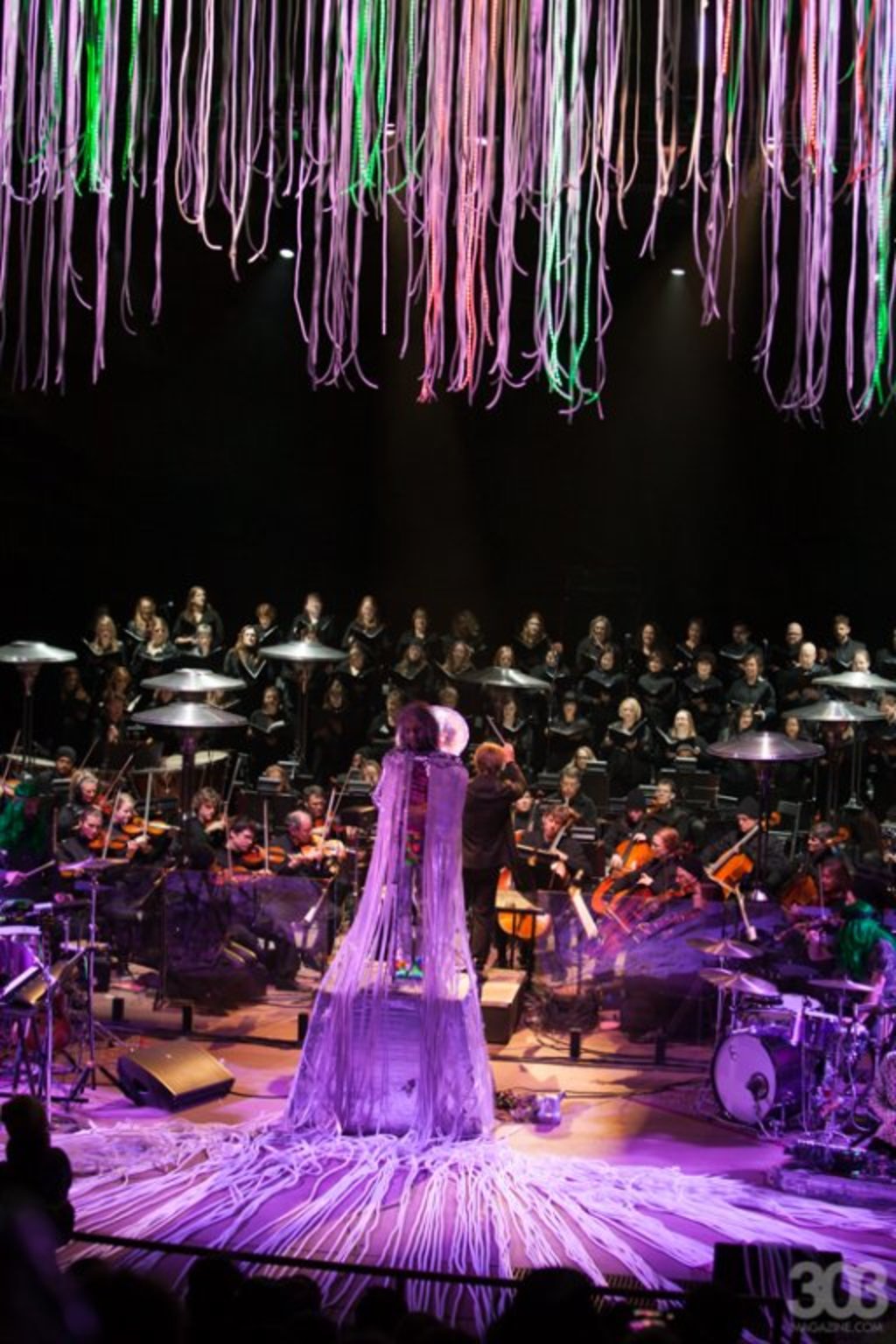 “Thanks everybody–it was quite an experience from where I was standing” – W.C.

What was truly unique about this show is that fans had the opportunity to hear songs from The Soft Bulletin that they’ve never before heard live and may never have the opportunity to again. After parting ways with the Symphony, the Lips played a couple more songs and finally brought out the confetti. Though The Flaming Lips have parted ways with Denver for a while, Wayne urged the audience to check out the Colorado Symphony at their “futuristic badass auditorium” as soon as you can.

All photography by Jacqueline Collins. Check out our full gallery for the show here.