MGK Pours His Heart Out at The Summit Music Hall

After seeing the line for the sold-out show stretched around the corner for nearly two blocks and people still outside the venue trying to score tickets, it become very clear that this was going to be a show to remember. That may be an understatement, seeing as this show exceeded all expectation and included some insane memories for everyone in attendance.  A live band, mosh pits, alcohol on the stage, crowd surfing, foot long joints, rock band covers, and even a young child being invited up on the stage and then launched back into his parent’s arms. The die hard fan base of MGK was out in full force and nearly every group of people was littered with his merchandise and accessories. While there were people of all walks of life in the crowd, one mission united them all on this night, to rage out with Machine Gun Kelly and make this a show to truly remember.

DJ Sh3vy got the night started by breaking out his DJ equipment and spinning some of today’s hottest tracks. With a few quality crowd reactions from the new school songs, Sh3vy changed it up and dropped some old school favorites which really hit home with the crowd.  After a quick set to warm the crowd up a bit, Sh3vy introduced Black Pegasus and The live performance began. 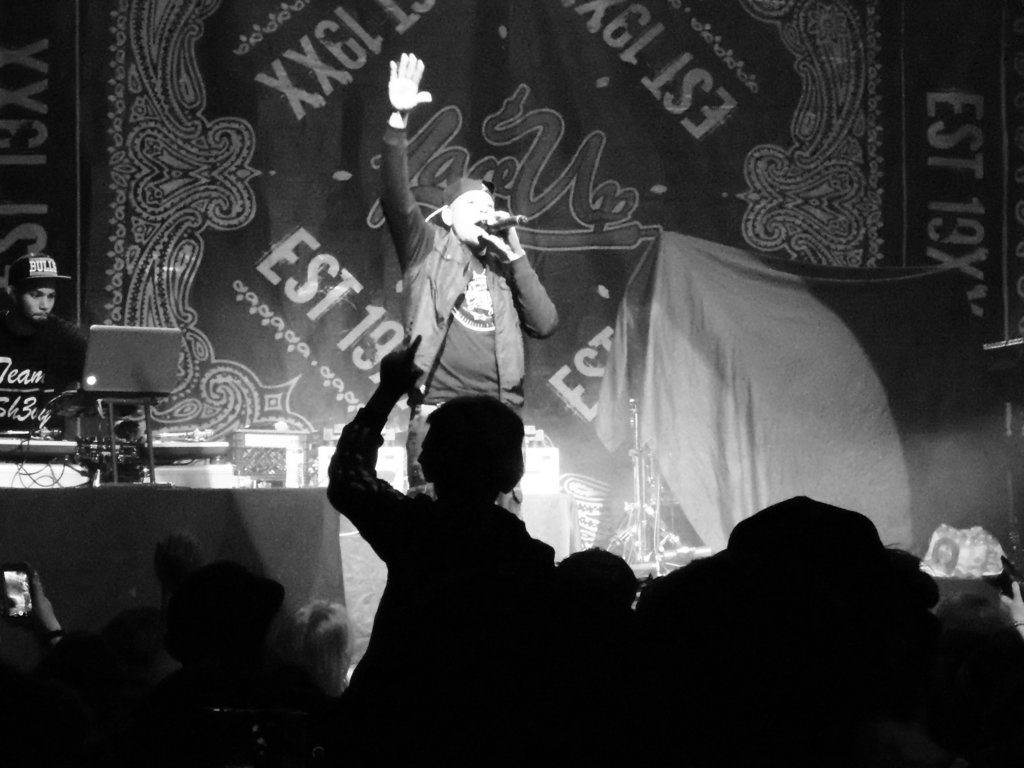 The crowd reacted well for Black Pegasus and gave him a solid welcome and stayed energized throughout the set. You could tell some people were only there for MGK, however others received Black Pegasus well and showed a lot of love for the opening act. The set contained some of Black Pegasus’s most popular songs including, “Night of The Purge”, “Serious”, and “Free the Weed” which got a huge crowd reaction.  Another highlight of the Black Pegasus set definitely goes to his team back pack freestyle verses, which seemed to impress many with his pure lyricism.  After a quick 30-minute set, Black Pegasus was done and before for the stage could even get set, chants of “EST” and “Lace up” rang through the venue, welcoming in the headlining act.

As MGK finally hit the stage, the shouts peaked and the sound in the building was almost enough to bust an eardrum.  Complete with his entire live band and best friend Dubo, MGK started the night out playing a bit of guitar himself and performing a great rendition of “Spotlight”, the opening song from his latest album General Admission.  The song also has a line that references when MGK lived in Denver and he made sure to emphasis the line, causing sheer pandemonium in the crowd. This wouldn’t be the only time he mentions his love for Denver and the aspects he remembers from growing up in the city.

Channeling his inner rock star, MGK then preceded into Alpha Omega and the entire crowd went nuts as the mosh pit began to form.  While that pit may have only took two songs to open up, by the third and fourth song it was an all-out rage fest for the front of the concert. High energy songs like “bad motherfucker” and “Sail” kept the crowd going crazy and made sure just about everyone was already worn out by the sixth song in the set. Each song was accompanied with its own signature ad lib screams and epic drum solos that the crowd seemed to yearn for more and more after every one.

The set list contained a lot of songs from his new album General Admission, but it also had a lot of the classics that only true fans know. Some of the older songs he played included “Warning Shot”, “Swing Life Away”, and “Mind of a Stoner”.  After noting that he wants to see a cloud of smoke above the crowd, a friend of his comes onto the stage and gifts him with a foot-long joint which he then proceeds to spark up. Then the song “.OZ” dropped and MGK got his wish as almost the entire crowd simultaneously lit up. 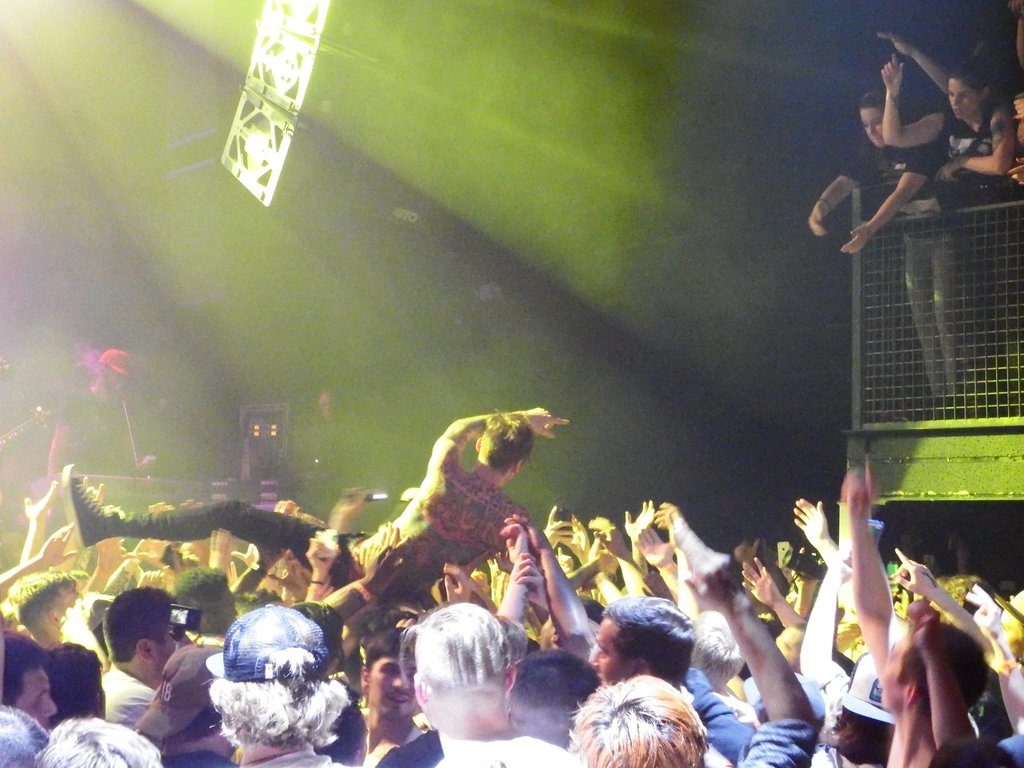 Just as the set seemed to be wrapping up and coming to an end, MGK peered into the crowd and noticed a surprise that he had to take advantage of. A young boy rocking his very own “EST” headband, maybe ten or twelve years old, had been rocking out on the shoulders of his parents almost the entire show and MGK decided to invite him up on stage. As the crowd went nuts for the young fan, he got an experience of a lifetime as he then gets picked up off of the stage and tossed back into the crowd where he safely made it back to his parents.

The little boy wasn’t the only person stage diving either, by the end of the night it was safe to say that MGK had crowd surfed every inch of the venue, even doing front flips off of each of the balcony’s. The already worn out and tired crowd was then re energized by the sound of rock when the band did a cover of “Small Things” by Blink-182. The night was capped off by a cake being tossed into the crowd and being thrown and smeared everywhere.  For the final song of the set, MGK had everyone squat down on the floor and prepare to rage out entirely for one last time. As the count of three hit, “Till I Die” dropped and the crowd exploded almost shaking the building to its core. 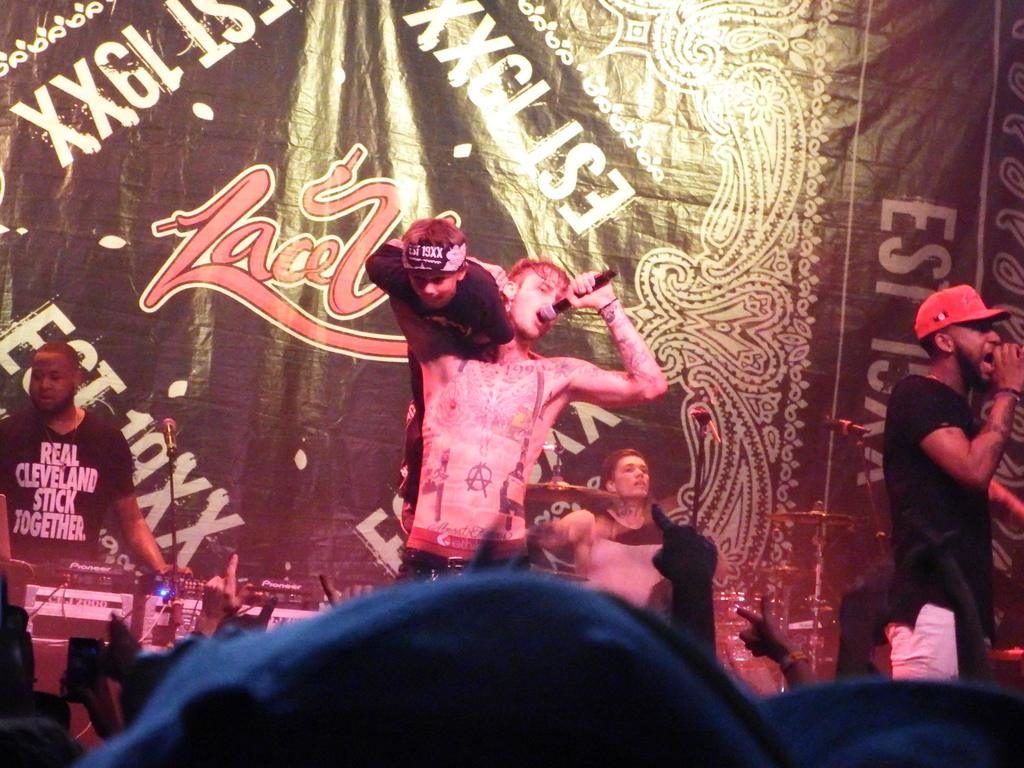 Machine Gun Kelly is one of the best live performers in the entire industry right now, and this show was another proving point of this reputation. Known for his wild antics and energy filled concert sets, this show was no different and was the epitome of a Machine Gun Kelly Show. If you didn’t get to  see him this time, make sure to catch him when he comes back to Denver this fall for his General Admission album tour.