Q&A – Inside Everybody Wants Some with Wyatt Russell, Glen Powell and J. Quinton Johnson

Everybody Wants Some, prominently described as a “spiritual sequel to Dazed and Confused” follows the ups, the downs, the ins, the outs, the booze and the girls that this one 1980s baseball team goes through in the time expanse of a weekend right before the start of college. This film portrays life in one of its rawest forms as it centers around the intimidating, but more importantly, liberating adjustment to college life. Created with an assembly of unique and ridiculous characters, it’s this crazy array of humans that shines brightest within Richard Linklater’s latest film. So, it’s only right that we should get a deeper insight into this world through the characters themselves. First, a little introduction:

Offspring of Kurt Russell and Goldie Hawn, Russell is known for his role in 22 Jump Street and Prisoner, as well his success as a hockey player.

Powell is known for his role in Dark Knight Rises, Expendables 3 and as the bow-tied prep named “Chad” in Scream Queens… (because what bow-tied prep’s name isn’t Chad, right?)

Relatively new to the film scene, Johnson has done work on Transient and Dirty Dancing, both which have not yet been screened, so let’s mentally give this guy a welcoming round of applause! 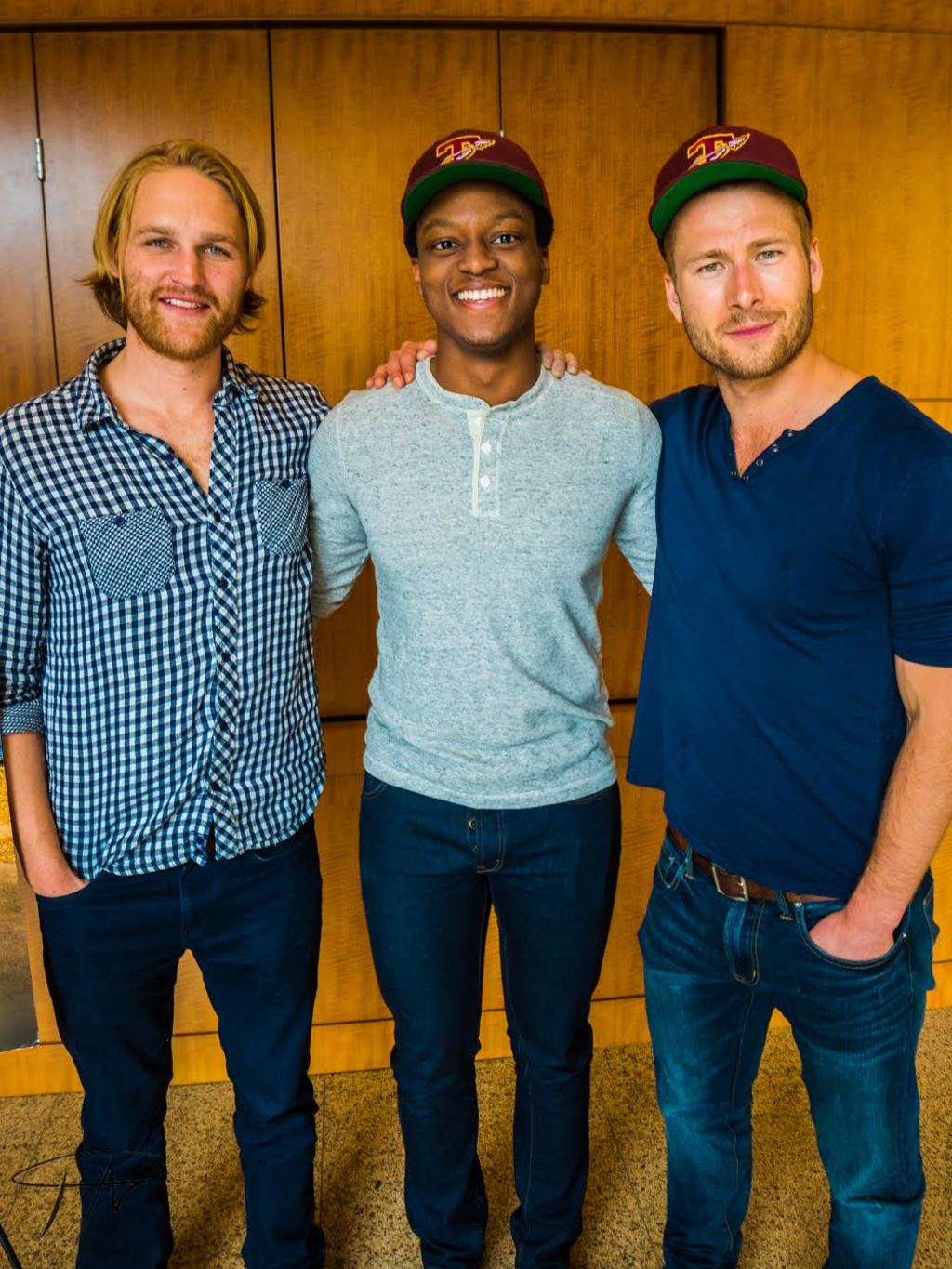 On a Tuesday afternoon at the Four Seasons Hotel, Russell, Quinton and Powell settled into their seats. Before the interview even started, it was clear this was bound to be an entertaining Q&A. Although they all had many insightful things to say about their beloved project, they also had much to laugh about.

Russell: What if we just started an argument right now?

303: In your own perspective, what was the film about?

Powell: Talking with Rick [Richard Linklater] about this, he was saying that ‘Dazed and Confused is the spiritual prequel to this movie.’ You know, that one is about conformity and confinement and this one is about freedom and what you can do with that freedom, and I think every kind of character in this movie represents a choice, ya know, a different worldview and perspective on who you can be when given the freedom of college. I think we all choose the path of fun, but it’s just what kind of fun.

303: What message do you think each of your characters sends?

Powell: I think mine is: Life, colon. Live it, comma. Love it, exclamation.

303: What about this movie do you think people will be able to relate to?

Russell: It’s really a slice of life; you go and watch the movie and you really do become a part of the team in a way where we let you in on the excitement of what it’s like to be here, or what it was to have been in that time, in that moment. With a plot driven story, it’s very hard to do that because you are not in the plot and the plot is something that separates you – the audience – from that experience. So what Rick does that’s so great is by giving you a slice of life and an understanding of what these guys were doing in this time, just in their day to day, allows you to assimilate into the story and to look at these guys and go ‘wow, I’ve been in that mood, I’ve been in that moment, I’ve had that feeling’ and it’s all fluid. You just enjoy the ride until it’s over and then you just go off and do something else, and I think that’s what people will hopefully get from the movie, is to get out and be like ‘I feel good, that was great.’

Powell: (To Russell) That was profound, actually. 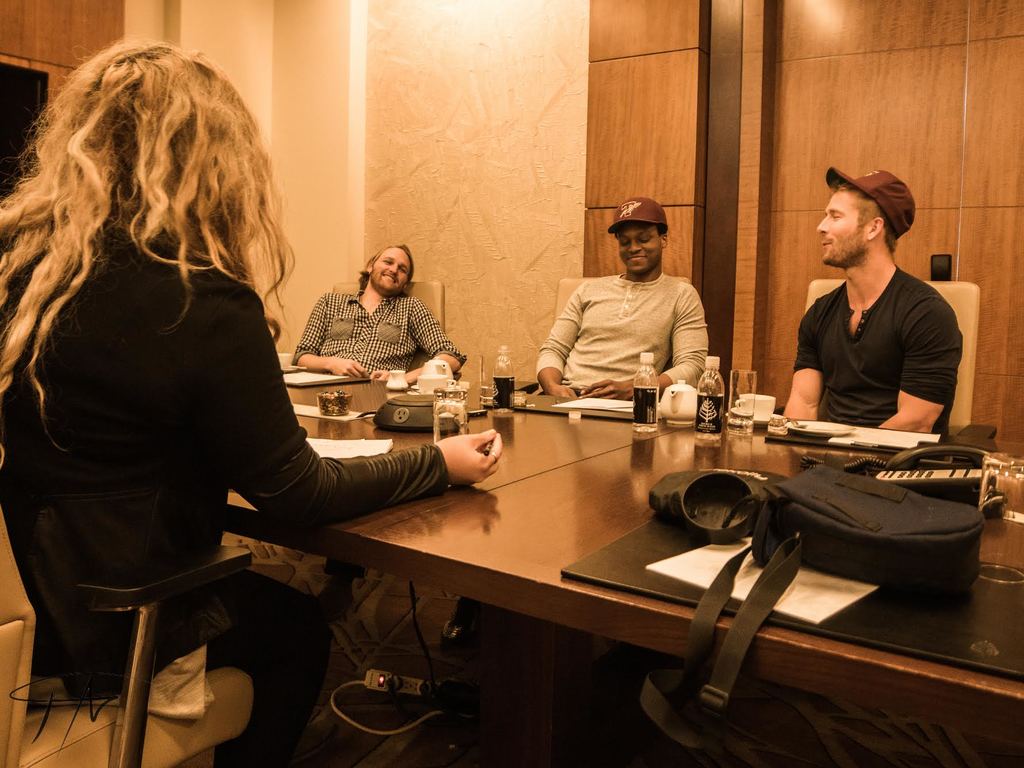 303: So y’all do believe this is an accurate depiction of life?

Russell: Well it’s Rick’s depiction; it’s Rick’s experience. So, whether it’s an accurate depiction of how life was for you  exactly is so subjective; it’s Rick’s experience and he’s letting you in on that. It’s a private moment in his life that he wants to share with everybody and that’s what’s special about it; it’s not meant for somebody to put their idea of what life was like in the ’80s. That’s what’s so fun about being in the movie, was having him as the storyteller, and it was autobiographical in a lot of ways.

303: Going directly into how you guys felt as actors, actors are one of the only people that can time travel, right? So how did y’all like being college students in the 80s?

Powell: How did you know that by the way? About the time travel. It’s the Prius you are given as soon as you join SAG; it’s a time traveler.

Being a college student in the 1980s, like I said, it was all about fun – there was no judgment. I feel like being an athlete nowadays there’s a certain amount of —well, it’s become more serious—like, when Rick would talk about getting in really good shape for the movie, he said ‘you guys wouldn’t have been in that good of shape back then.’ But that’s kind of an interesting thing because now athletes use their supplements, or diets or try to cut weight and they are taking all these different things in order to get peak performance, but back then that wasn’t the nature of an athlete, it was a lot more fun.

I feel like a lot of these guys – at least talking with some of my buddies who are trying to be pro-track, it’s a lot more serious now, and these guys (talking about their characters) they go out on the town, they dance, “Cotton Eyed Joe”, punk, disco —it was like these were cool guys, cool guys to hang around with.

Russell: I mean it was the best experience of my life.

303: Who was each of your favorite character?

Powell: We were talking about this last night, we were talking about how literally, we’ve seen the movie, what like eight times? You get joy out of different characters every single time. Every character, I’m like ‘dude, I totally missed that moment’ – you notice something different – it’s a collage where something different is going on every time. You know when you’re looking at a Where’s Waldo? And you’re like ‘oh there’s the Viking, he’s throwing hot oil over the wall.’ You’re looking for Waldo and you see all this different stuff, you know what I mean? This movie feels like that for me, it’s like as soon as you stop being so egotistical and start looking at everyone else in the frame, you’re like ‘oh my god!’

Russell: One of my favorite parts is when Finn is making peaches, the anger, it was like — and this is also why I think the film is so fun to watch — is the emotions are so real, nobody ever played ‘the joke,’ not really. When he sucked the whipped cream off your finger like that would piss you off, and he does that and it’s like so fucking real when you punch him, you punch him hard.

Powell: Yeah, he was hurting, we only did that scene a couple of times, (to Johnson and Russell) but do you remember? Were you there when we shot that?

303: It wasn’t a stage punch, you actually punched him?

Powell: Oh no, I clocked him. What was so funny about that was, Rick was trying to fill up this party in fun ways and that was like – there’s obviously no plot to that party at all – it’s just about what we do at that party and how everyone experiences that party together, so Rick kind of came up with that thing on the day and then after I hit him I was still fueled up so I grabbed it and I threw the thing [dessert] at him and then I hit the camera and Rick immediately—the whole camera team was like ‘Glen, are you serious?’ and Rick is like ‘I told him to do the scene, but I didn’t tell him to do that last part, so that was all Glen’ and I’m like ‘I go with my instincts and you sell me out?’

Johnson: But apparently it all worked out, because that was the shot they used. 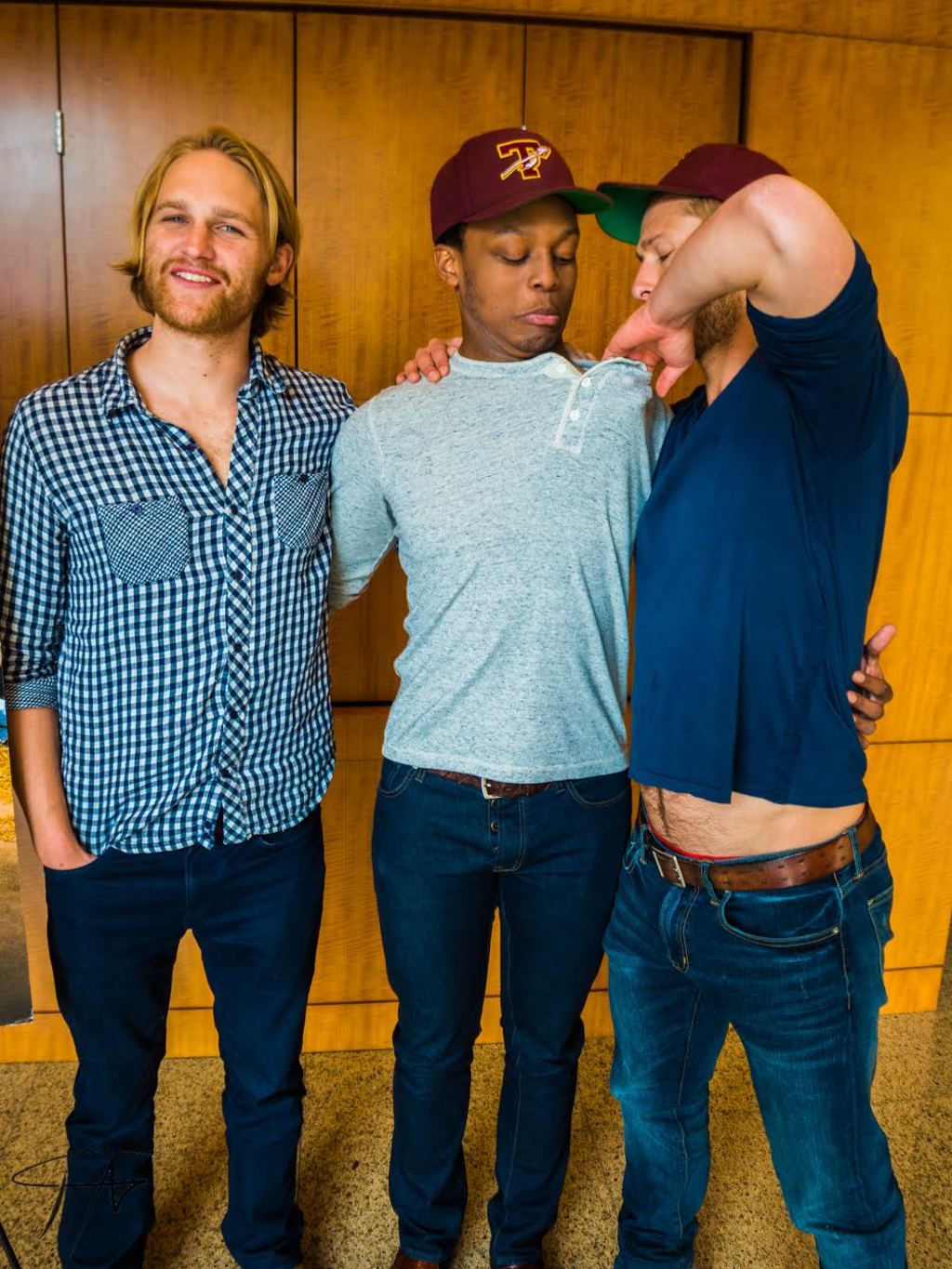 When told to do something that makes the photo original….

Powell: (On Russell’s naked yoga scene) Can we talk about Wyatt Russell’s ass for just a minute? The amount of squats he did right before that was just unbelievable.

303: Now, did you have a cover (for his private parts) or were you just free flowing?

Russell: I had a cover just to make sure nothing crazy happened.

303: What’s it like to watch yourself in a make-out/sex scene?

Powell: (Jokingly) I mean obviously I did a pretty good job of it so it’s like watching – ya know when you make a good play and you’re watching footage back with the whole team and you’re like ‘oh I’m about to sack this guy, BOOM!’ and then you’re like ‘you guys like that? You like that? you like what I did there?’ That’s kinda how it felt for me.

Russell: I personally didn’t – I was talking about it with Rick and I was like ‘I don’t want to make out with anybody, because then I’d have to watch that be like that’s really weird, so don’t do that to me.’

I hope this Q&A has peaked your interest enough to go and check out Everybody Wants Some, showing in select theaters on April 8 and then more widely on April 15 — find out where it’s showing in a theater near you!

All photo by Tobias Albrigtsen

In the meantime, check out the trailer here: