What: a special exhibition by artist Joey Cocciardi exploring the process of landscape painting and the complicated relationship between modernity and wilderness.

Nature and art have a long history together, a history which has typically favored an idealistic view of wilderness. As it becomes more and more apparent that creating pockets of “nature” is problematic—not only because it separates species from each other but also because it fractures our very idea of what nature truly is—it has become more necessary for art to reflect this tension. New York-based artist Joey Cocciardi has undertaken an epic journey to explore this and to challenge our normal perceptions of Colorado wilderness in his first solo exhibition, The Sunday Painter at the Gildar Gallery in Denver, ending on March 4, 2016. 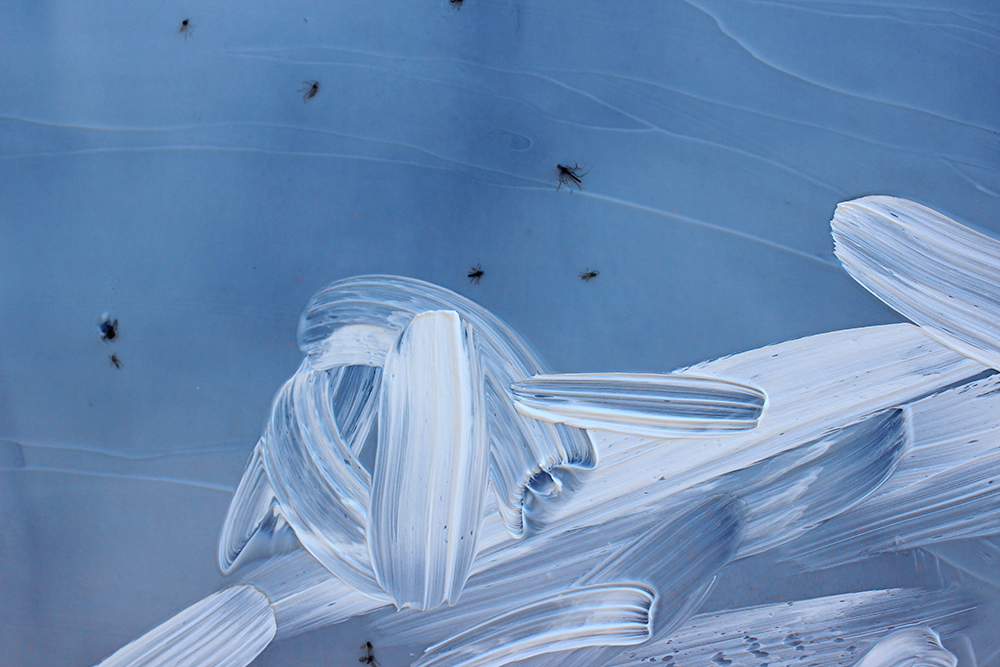 The exhibition aims to expose the complicated impression mankind have imposed on nature; the idea of nature as romantic and pastoral rather than intense and perverse. Cocciardi revels in these latter ideas, perhaps hoping to highlight the indignity of the former, but more than that he embraces the processes that go hand-in-hand with intensity rather than romance.

Taking inspiration from the direct observation method whereby artists physically immerse themselves in the landscape they wish to paint, Cocciardi radicalized it and spent the summer of 2015 trekking in the wildernesses of Colorado with large canvasses affixed to custom wooden crates, strapped to his back. These containers and straps remain with the art, complimenting the extremity of these tasks and reminding us that things are usually not as simple as they seem.

“…Drawing attention to the stark difference between man-made and natural and asking, do modern society and wilderness belong together?” 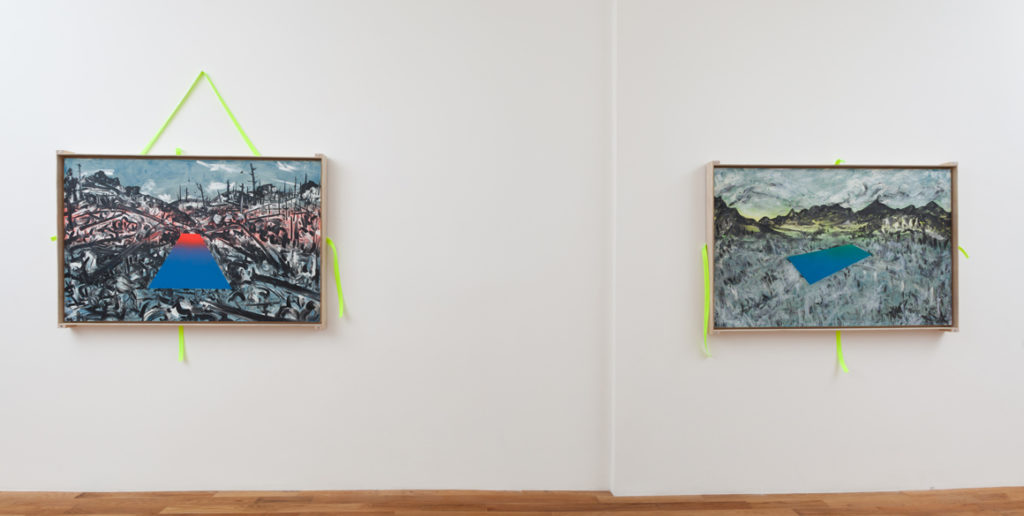 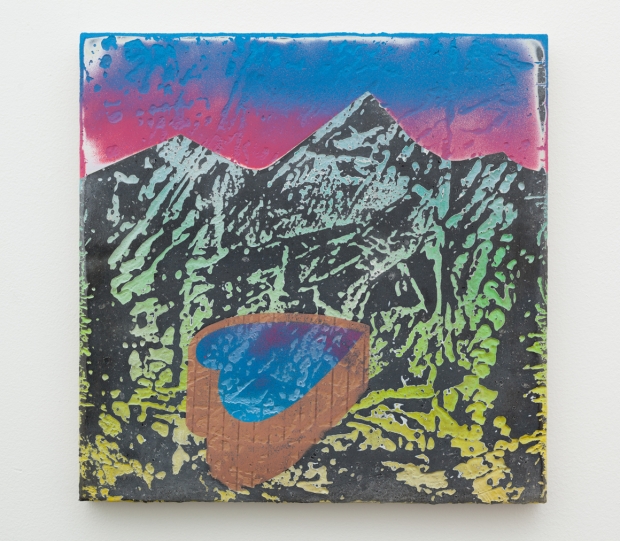 The pieces are all quite large and the gallery has done an excellent job presenting them with enough room to stand back or step close. Before understanding the bigger pieces in the front room, be sure to check out the three small works in the back room, titled Pool Containment 1, 2 and 3. These are the only ones in the exhibition painted in a studio and set the foundation nicely for the rest of the pieces by introducing the dichotomy of neon colors and landscape settings, as well as the artist’s passion for the alchemy of paint. Notice the apparent thickness of these paintings, the engraved textures and designs, and then take a look at them from the side. Using aqua resin, India ink, pigment, enamel, oil, acrylic and chrome on top of linen, Cocciardi creates deep texture and depth by layering. Presenting natural snapshots of mountains with vibrant and unnatural coloring create an image that contradicts our preconceived notions of such snapshots.

The rest of the exhibition are his transported works, named by the GPS coordinates he painted at, and are all worth getting close to. Because of his marriage of oil and Day-Glo acrylic paints, he creates clever fictions to the eye— areas that seem blended with many colors but are actually only composed of black, white and one bright color— while also representing his chosen landscape with impressing clarity. In each painting, there is a “reflecting pool” where Cocciardi has excluded a rectilinear area of the bright Day-Glo gradient from the messy and adventurous strokes of black and white oil that make up the scene. As the gallery’s press release stated, “these hyper-color fields pierce through the gushy pictures as modernist architectural features embedded directly within the otherwise untamed landscape,” drawing attention to the stark difference between man-made and natural and asking, do modern society and wilderness belong together? 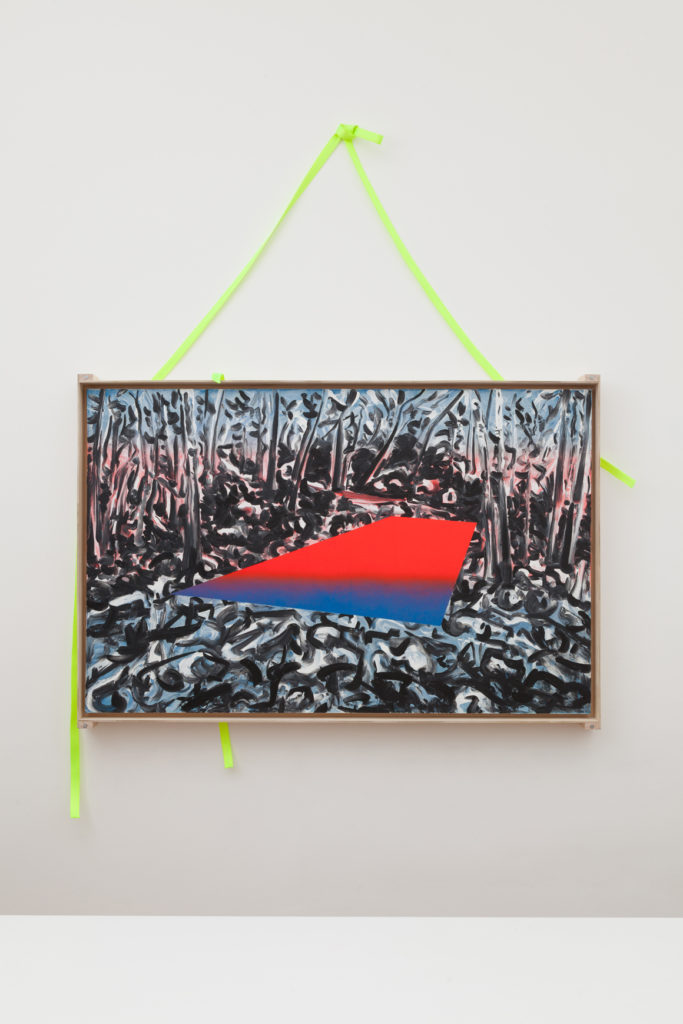 “Casting leisure aside for a genuine experience.”

Perhaps the most peculiar and real aspect of these paintings are his inclusion of debris and insects that were attracted to his paint while he composed the pieces outdoors. Not only does it add to the composition visually, it also emphasizes the process of painting outdoors. It reminds us that nature is not separate from us, even if we are using something as unnatural as Day-Glo. And it criticizes the idea that nature is best at a pretty sunset. Cocciardi, in a limited publication he created to go along with the exhibition as a stylized field guide, took pictures of his canvasses in the areas he painted, displaying not only the contradiction of his explosive colors with the natural setting, but the reality of the process. 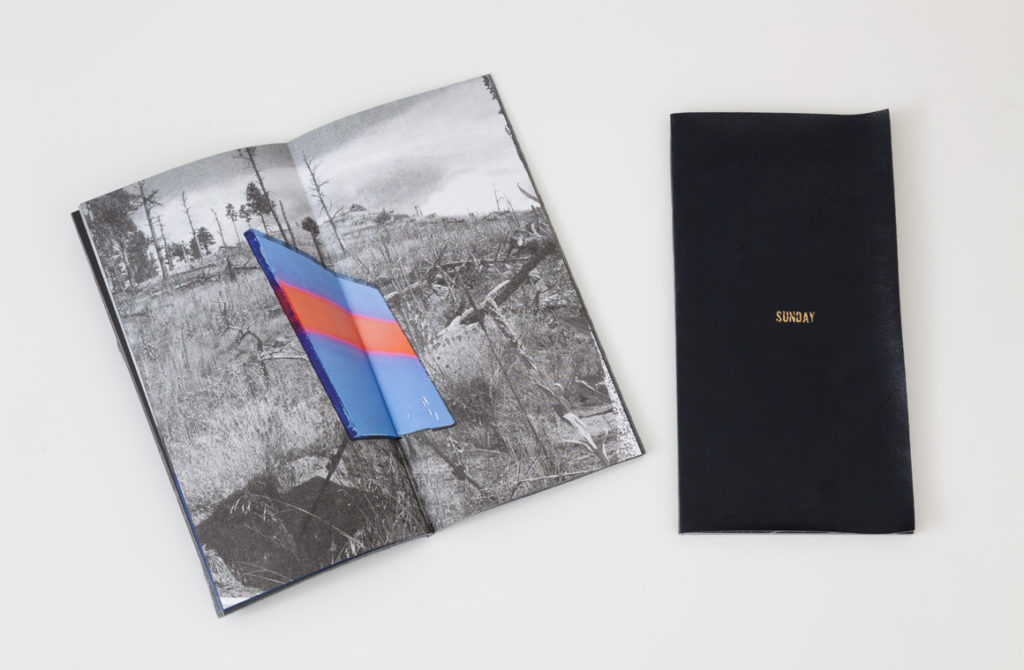 The field guide to Cocciardi and his adventures in landscape painting. Photo credit: Gildar Gallery

If you want to reimagine landscapes, and especially Colorado-specific vistas, then you will love the ways this artist has represented them. Immerse yourself in this complicated and brightly colored world where man and wilderness meet, where relaxation and extremism tangle, where you can witness the painter “casting leisure aside for a genuine experience.”

This exhibition originally ran from January 9- February 20, but has been lengthened to last until Friday, March 4.