What: Excellent craft cocktails and coffee in a cozy, modern atmosphere.

Before Broadway Street, becomes South Broadway, just past the Denver Art Museum, there is a coffee shop nestled behind a staircase. Despite its blink-and-you’ll-miss-it location, Amethyst Coffee Co. has attracted a consistent and quirky customer base that has not only contributed to a successful first 10 months, but allowed owner Elle Taylor to extend the hours and add an evening cocktail menu.

“This was always part of the plan,” explains Taylor, “but it happened sooner than anticipated.” Not only that, but in its first few weeks there have been more people showing up for this late night menu than she expected during its initial stages. 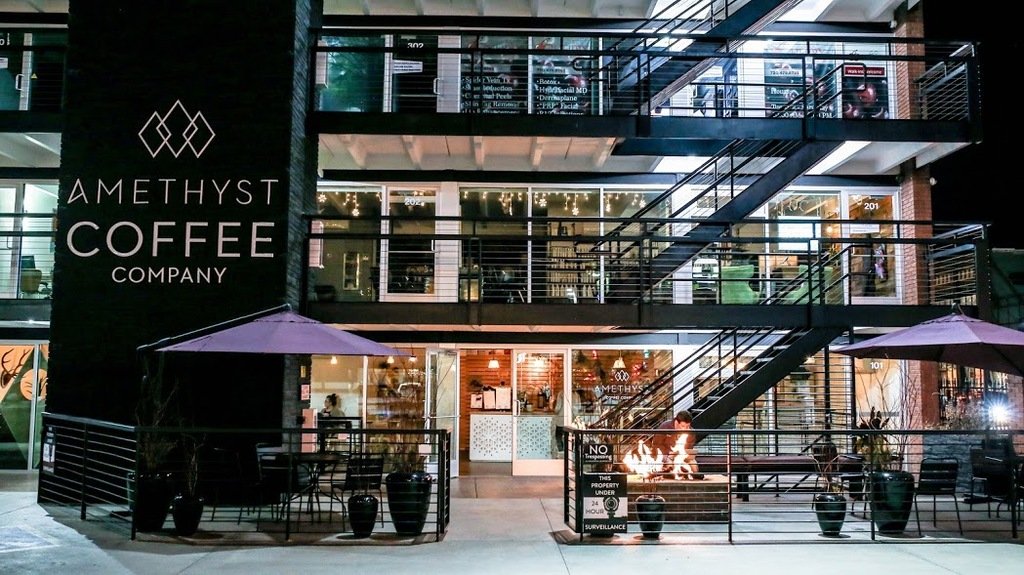 The consistent customer base, even during these new hours, is evidence of the comfort people feel at Amethyst. The open, airy design and versatile menu allow people to settle in and feel at home and many are drawn to Taylor’s intentional and personal menu design. Taylor, the unofficial darling of the Denver coffee community, received a lot of support both from fellow coffee folk and local bartenders in creating the new cocktail menu, and the effort shows. Taylor still manages to pull off these interesting libations without pretension as she effortlessly interacts with her customers.

As I sat at the delicately designed wooden coffee and (now) cocktail bar, a couple started briefly swing dancing to the right of me. This moment felt perfectly fitting in a small, sweet atmosphere that puts people right at home. This comfort Taylor is able to provide allows the fledgling cocktail menu to be so successful, even in its preliminary weeks.

The menu is not the only thing that was thoughtfully created, however, the hours have also been intentionally designed. Taylor intended for the hours to create what she refers to as “a european-style situation, grabbing a cocktail right after work or maybe before you go out.”

Coffee will also remain available throughout these new hours to allow people to get exactly what they’d like. 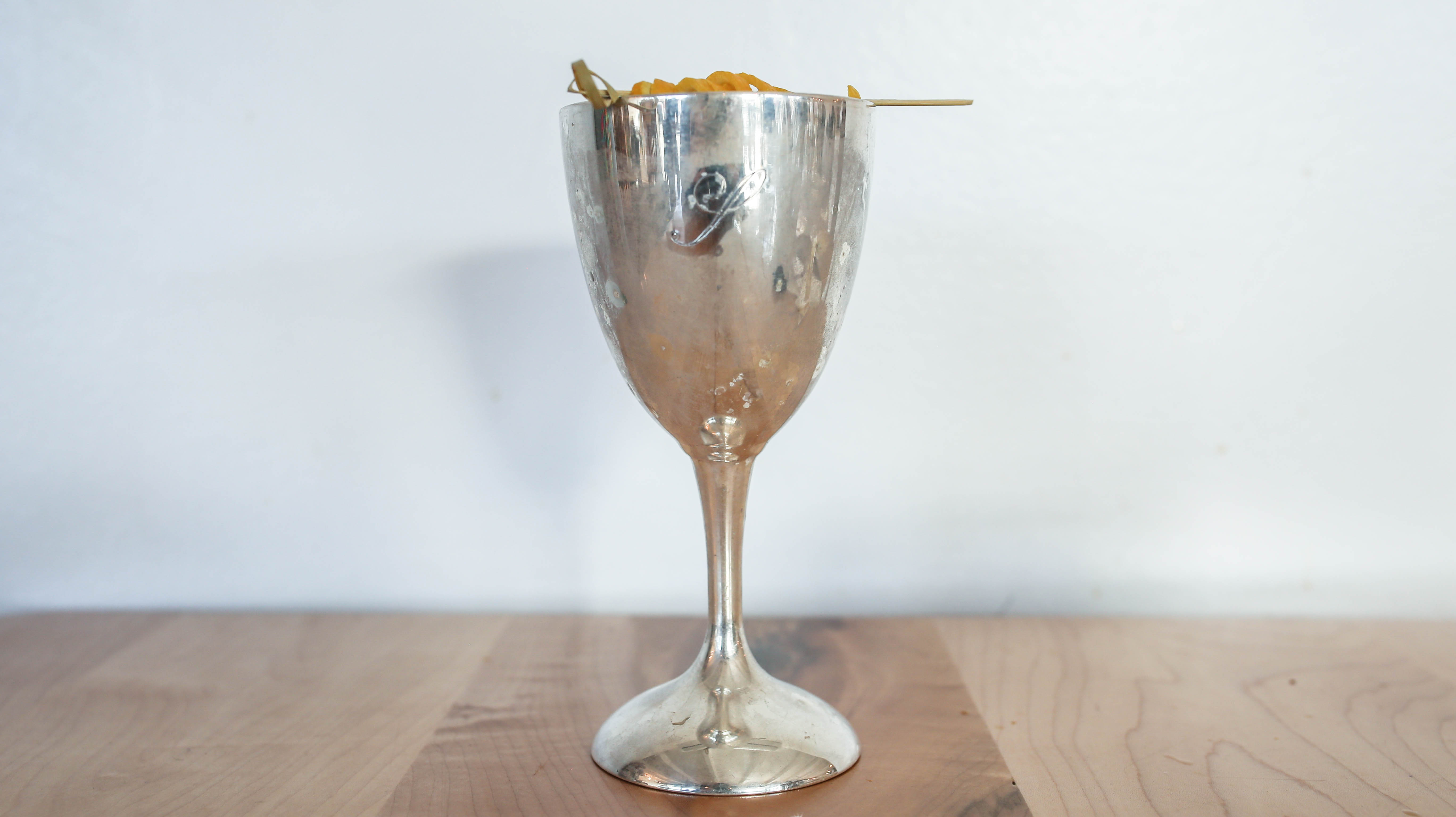 “I think our back bar is kind of fun, we have a staple for every cocktail and then a variation,” says Taylor. For example, Amethyst now carries Sipsmith’s London Dry Gin, which is a traditional styled gin, very juniper forward with some citrus elements. This is a perfect gin to use for a classic Negroni, according to Taylor. The other option available is St. George’s Terroir gin. This spirit sources its botanicals in California and is much more pine forward, which to Taylor tastes like Colorado and tastes like the mountains.

“So we tried to do that with each spirit, kind of have something more straightforward, but also a really high-quality product and then something that was a little different, if you just want to try something new,” explains Taylor.

The cocktails are mostly new twists on old favorites, such as their Hot Toddy ($9), which is made with brandy, honey, lemon juice, and a chrysanthemum tea that adds a floral element to complement the bite of the brandy. They also have their version of an irish coffee called the Swashbuckler ($8), made with rum instead of whiskey, butterscotch, Irish cream, sweetened condensed milk, and heavy whipping cream.

A fun addition to the menu is a coffee cocktail I tried appropriately named No Sleep Till Denver ($8). This wintery cocktail contains cold brew coffee, amontillado sherry, house bitters, and a simple syrup made from Uplift Tea. Served with a cherry on top, this caffeinated cocktail is strong and sweet with just the perfect balance of bitterness to taste both comforting and energized.

Taylor says customers should expect a “My Favorite Things” menu in the coming months. This will be a cocktail tasting list, changed monthly and designed by one of the staff members. For a flat monetary amount, customers will be able to try small tasters of six different cocktails.

All photos by Danielle Webster. 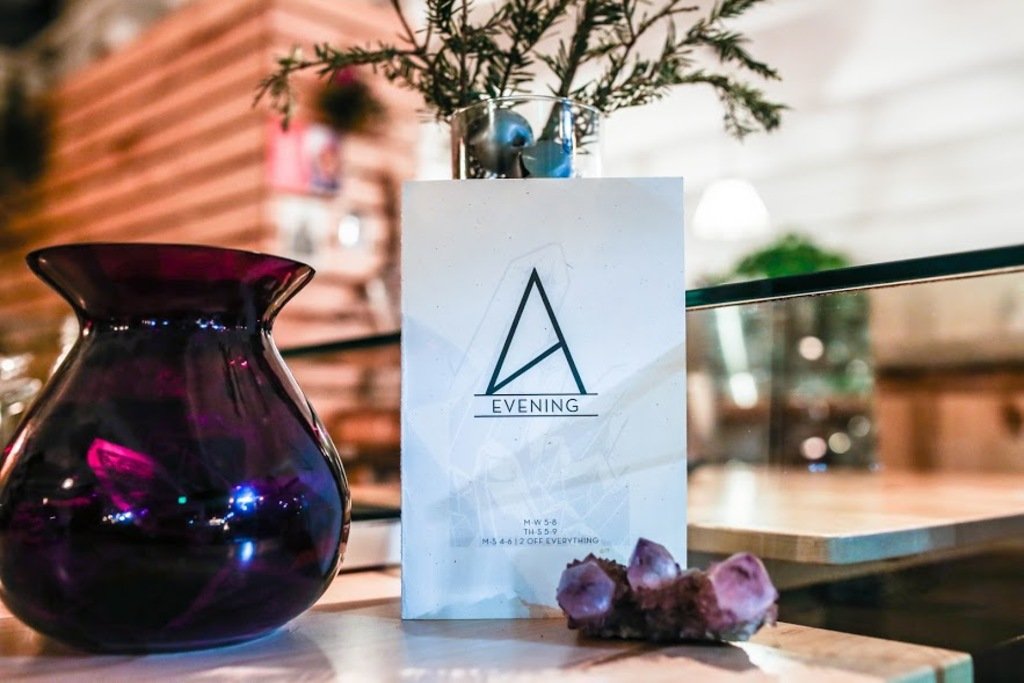 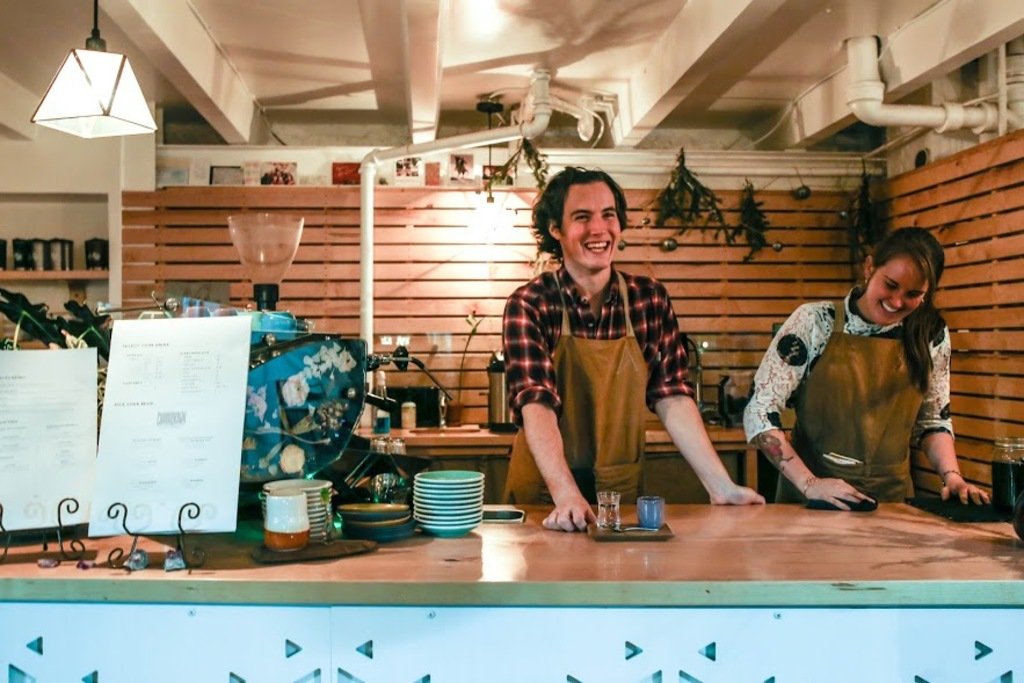 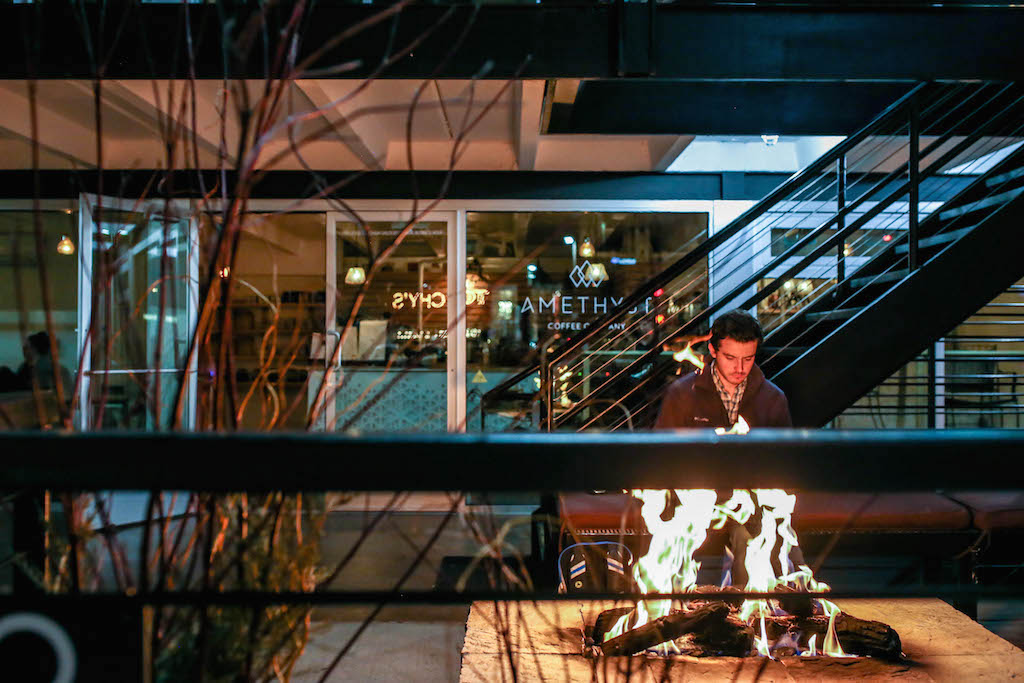 Patio and fireplace in front of Amethyst Coffee Co 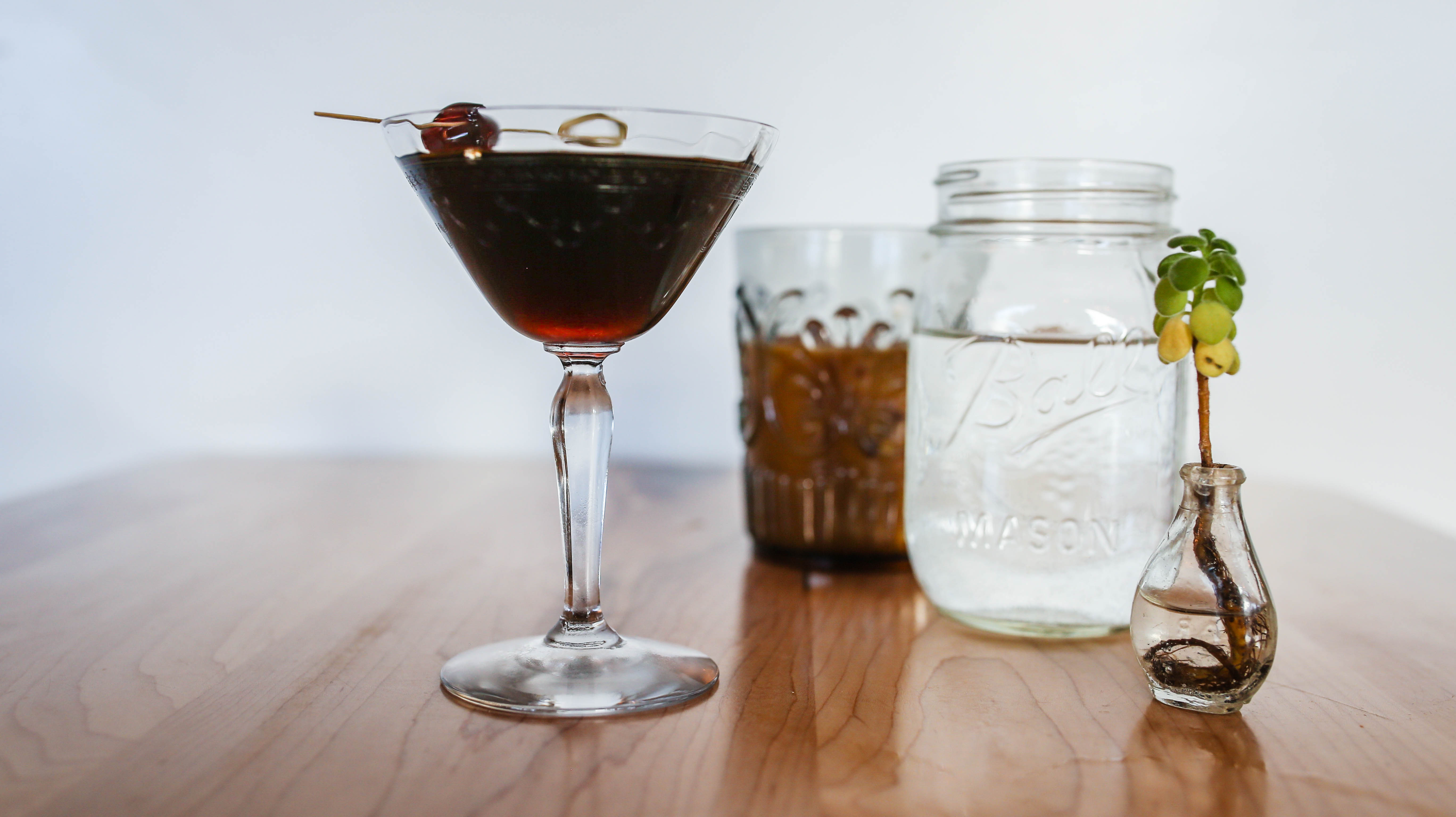 New cocktail from Amethyst Coffee Co: No Sleep Till Denver 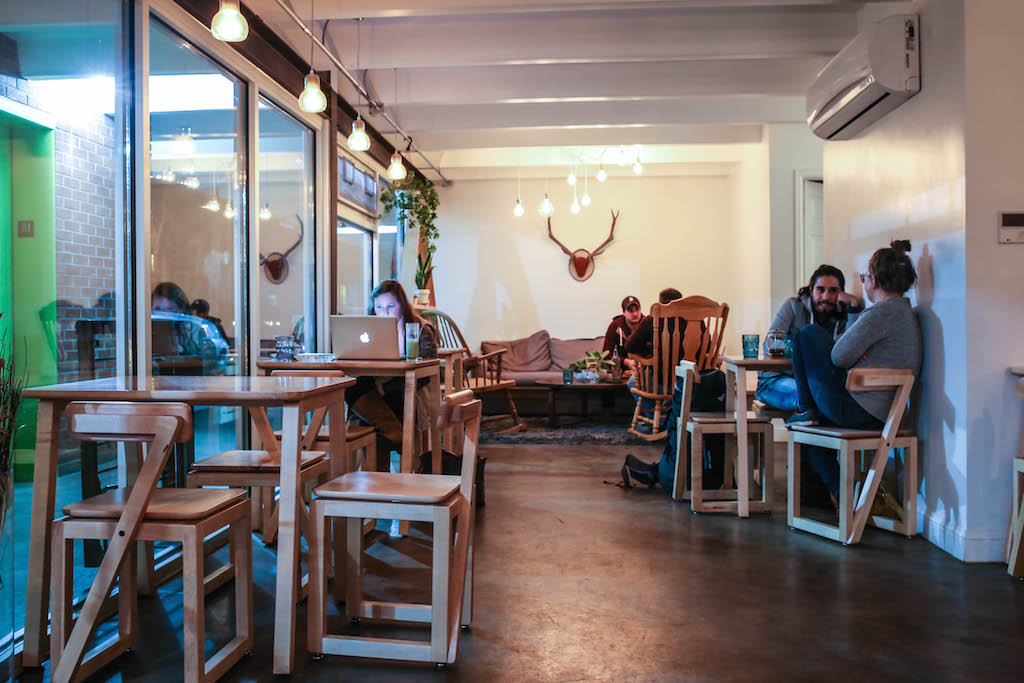 People settling into the comfortable environment at Amethyst Coffee Co