The last time I fell in love with a band this hard, it was Colorado’s own Elephant Revival (stay tuned for 303‘s interview with their gorgeous fiddle player, Bridget Law). The majestic Bonnie Payne, with her famed washboard and silvery voice, stole my heart. I was forever a changed woman.

When a dear friend of mine recently recommended that I listen to Hurray for the Riff Raff, a kinda folky, sorta bluesy Americana band from New Orleans, I did just that. And I was instantly head over heels. I started with their Spotify station, I ran through their Soundcloud and then I escalated to their videos– especially this full thirty minute set that took place in someone’s yard in the lower 9th Ward in NOLA. I continued to watch every clip available of Hurray for the Riff Raff on both YouTube and their website. I bought my best friend one of their vinyls for her birthday. You get the point. 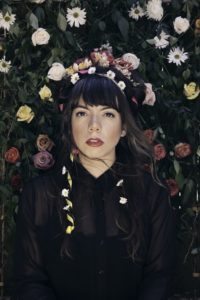 I was enthralled, captivated. Lead singer and banjo player Alynda Lee Segarra’s voice is fuel for the soul. She grew up in the Bronx, got into hardcore punk (as most great musicians do) and then spent time hitch hiking and hopping freight trains back and forth across the country before ending up in the Big Easy, where she joined the Dead Man Street Orchestra. Hurray for the Riff Raff has put out nearly one album per year since 2007.

The Wall Street Journal has described Alynda Lee Segarra as “(having) a subtle, expressive voice that she wraps around songs that draw on the sounds and styles of the American South, and her lyrics often takes unconventional tack on traditional subjects.”

Small Town Heroes, Hurray for the Riff Raff’s latest album (2014), was said to be an “amiable set of millennial-informed, urban crafted, Woody Guthrie-inspired, contemporary hobo-folk anthems that play fast and loose with genre tropes without losing the essence that makes them universal” by James Christopher Monger, a music critic from Allmusic.

“We really feel at home with a lot of worlds of people that don’t really seem to fit together,” Alynda says, “and we find a way to make them all hang out with our music. Whether it’s the queer community or some freight train-riding kids or some older guys who love classic country, a lot of folks feel like mainstream culture isn’t directed at them. We’re for those people.”

Perhaps this is why Hurray for the Riff Raff’s music has resonated so deeply with me: it embraces alternative, bohemian ideals and tells tales of passion, travel and life with a sort of timeless grit and grace. Don’t miss Hurray for the Riff Raff open for City and Colour at the Ogden on Monday November 9 at 8pm. Tickets are $35.