What: A specialty coffee shop that employs homeless youth to help get them off the streets

Walking into Purple Door Coffee in Five Points, it would be hard to distinguish from the many specialty coffee shops that have made their homes in and around Denver. Supplied locally by popular roaster, Corvus, and catering to a young, up-and-coming crowd, Purple Door’s youthful vibe is familiar. This place is different though, and very special, especially to those who call it home. Founded by Madison Chandler, Purple Door Coffee opened their big purple door in 2013 with the sole purpose to create a place to employ homeless youth and give them a chance to leave life on the street behind.

“We don’t have a ton of advertising about what we do in the space,” said Chandler. Most often, people who come into Purple Door, don’t even realize all of the work that they do. “We wanted to create a business that could compete with other local coffee shops, specialty local coffee shops and we also wanted to create a new space for our employees,” she said. “It’s more like this is a new identity.” 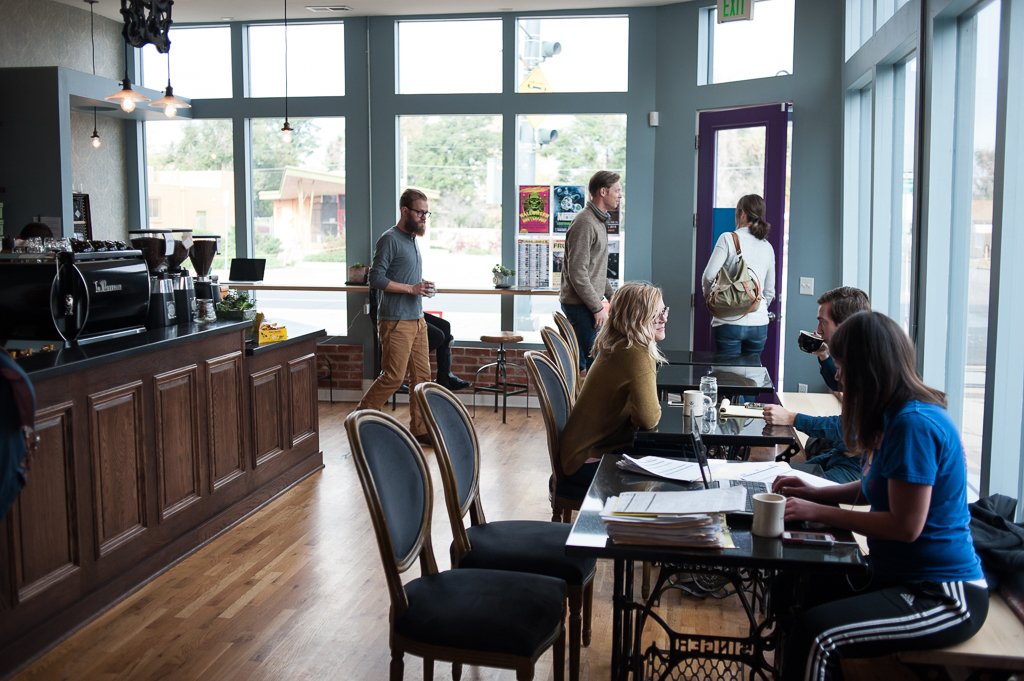 The interior of Purple Door Coffee. All photography by Glenn Ross.

Purple is the color of royalty and the history of the café’s namesake is not lost on Chandler. “We wanted to paint all of the doors a certain color so we could create this space that when you walk into it there’s an equal playing field and everyone is equally treated like royalty,” she said.

Purple Door Coffee still relies on donations to keep its door open, and each year fundraise about one-third of their annual budget, because of the effort that they put into their employees. “I’m not sad about this, but we have to do so much training, so much training,” she said. “We hire people who have never been able to hold a job anywhere else, so the training involved is intense and it’s not lucrative.”.

“…None of the ones that have graduated the program have gone back to homelessness.” 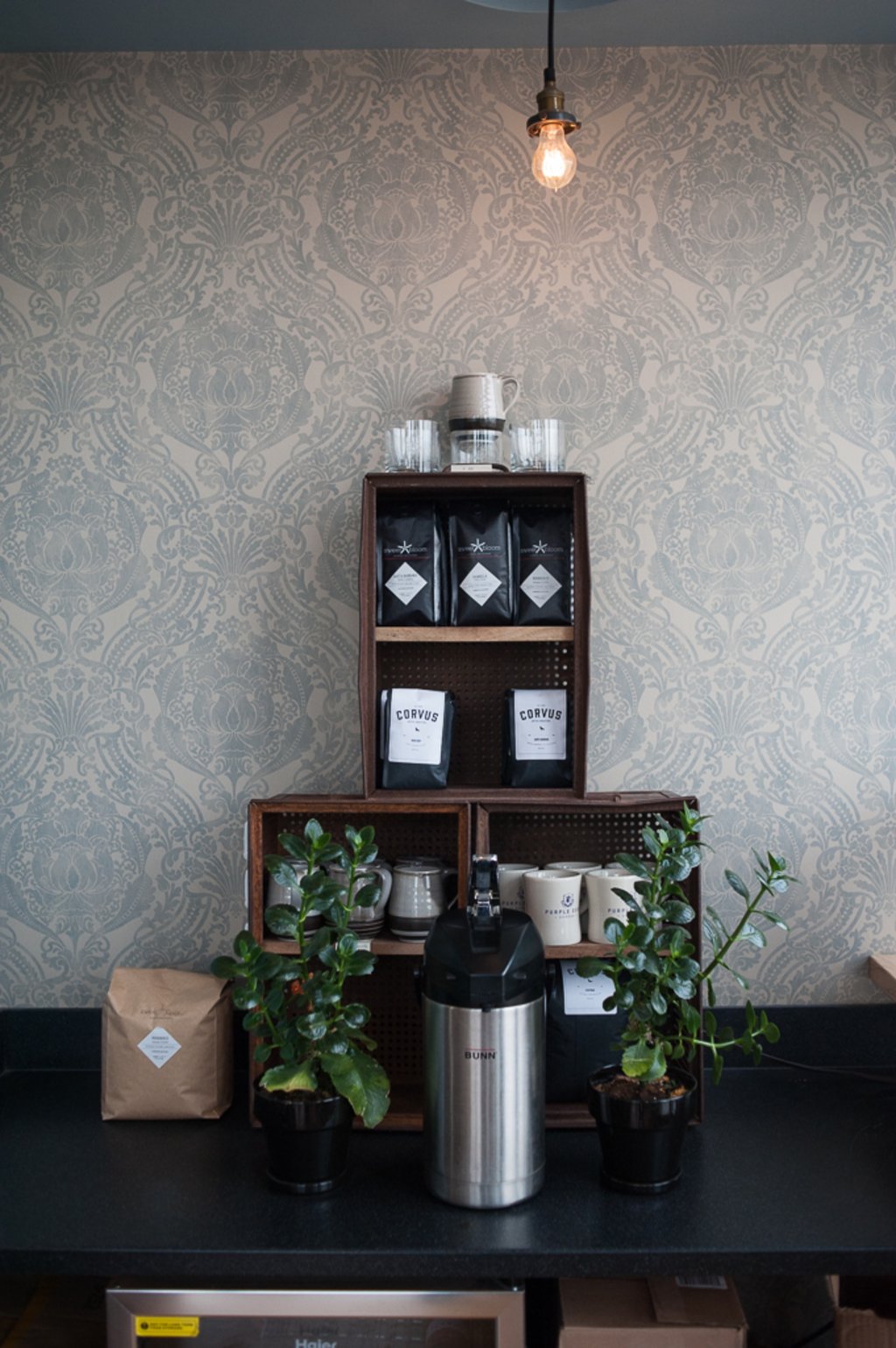 A display of goods for sale in the cafe.

Initially, the goal of Purple Door was to be self-sufficient, but overtime, Chandler and her team have realized that may not be possible. In the time to come, Chandler said that she is trying to get that number down to 20 percent, so that 80 percent of the budget will come from the café.

In the two and a half years that the purple door has been open, Chandler and her team have hired 12 people and five have graduated from their one-year program, with two about to join the ranks.

Chandler has stayed in touch with all of the graduates and does her best to set up meetings once a month. She said that everyone has done differently once leaving the program, and it’s not a fix-all. She tries to remind graduates that even people with jobs and homes have their struggles and question their place. But they all have one thing in common, she said:

“The cool thing is that I can for sure say that they have all held jobs and they have all been able to provide for themselves and none of them, none of the ones that have graduated the program have gone back to homelessness.”

Even with the achievement that Chandler has garnered, there is still more to her dream for Purple Door.  “The coffee shop is everything we have right here and we can offer about 4 jobs a year if people stay in the program,” said Chandler.

That’s not enough, at least according to Chandler. Also, the things required of a coffee shop job can automatically disqualify some who are looking to leave homelessness behind.

“This can be really high stress in here and you have to be able to read and write and do math here.” Though, the problem is not without a solution; Chandler and her team are looking to create job to offer everyone. “So we decided we wanted to open a roaster,” she said, “so we would be able to offer jobs to a different skill level.” 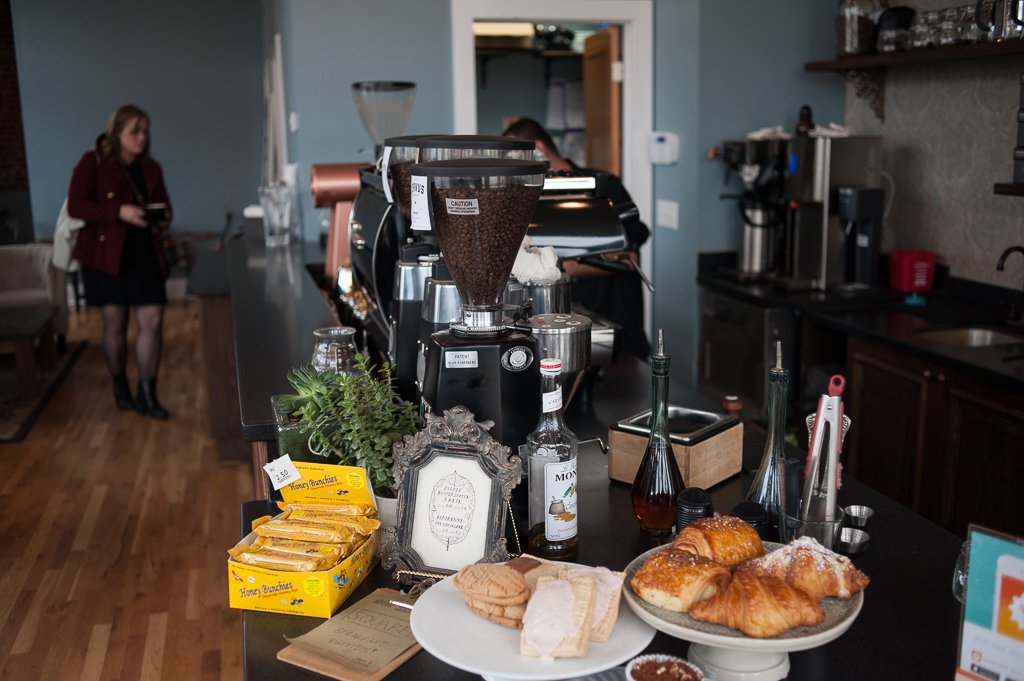 The counter and baked goods offered at Purple Door.

In addition to creating more jobs for at-risk and homeless youth, Chandler explained that this would also help them get closer to their goal of 80/20 because “we would be cutting out the middle man of the supplier,” and allow them to fundraise less and focus on job training more. It also helps that Chandler and her team are crazy about coffee, so the idea of opening a roaster is really exciting.

After a successful fundraising campaign, Purple Door was able to raise $72,000 (online and off) of the $100,000 they need to open the doors of their new location. Chandler wants the roaster to stay close to the cafe, but it all depends on whats available. With what they have done so far, Chandler said that they plan on ordering the machine within the next few weeks, and spending the next few months trying to fundraise the rest. If all goes according to plan, they hope to be open in April of 2016.