The food writer often works his or herself into a corner trying not to overuse the word “restaurant” in a piece, painstakingly re-working sentences that would not deserve such attention otherwise. As a restaurateur, though, surely you can call a new eatery any number of crazy things that refer either to the layout, the food specialty (i.e. how it is cooked or prepared, where it comes from etc.) or some other winking inside joke/pun.

Simply calling a restaurant “Bacon” would have its complications for a number of reasons, but David Dill, a first time restauranteur, wants to justify the “social house” addendum he slapped on the name by encouraging a sense of community. Social house or not, Dill wants his new restaurant, which opened this morning, to be about much more than breakfast meat.

Citing how the likes of Jamey Fader, Jen Broyles and Justin Cucci helped to make the Lower Highlands a destination for food and retail, Dill ultimately chose the historic Cobbler’s Corner in Sunnyside as the location of his venture for similar reasons: he noticed the neighborhood was underserved. 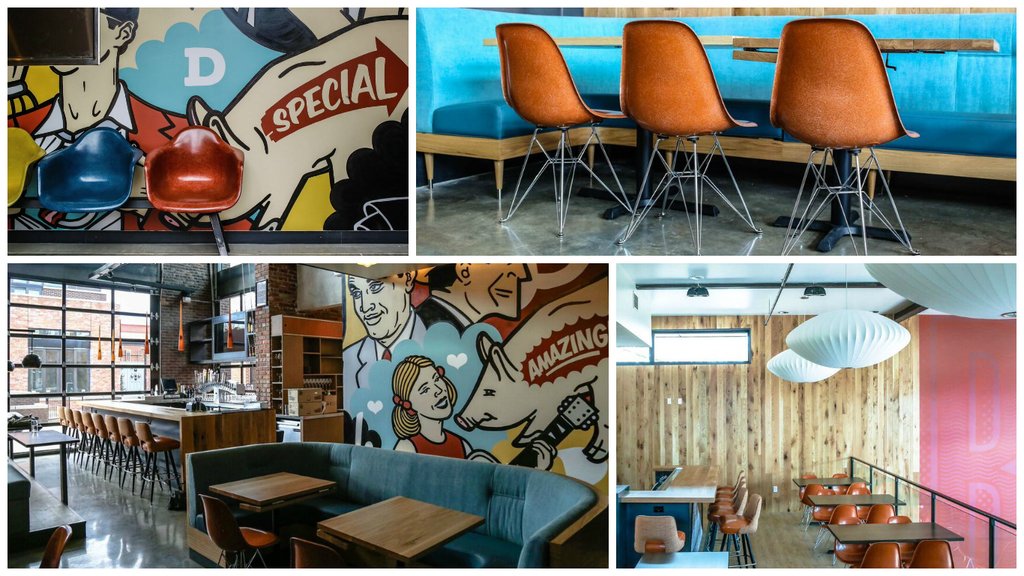 Tucked in an alleyway bisecting the Cobbler’s Corner development, the red neon Bacon sign pulls you into the naturally-lit space where a sizable outdoor patio looms invitingly to the right. Within, the flamboyant pop colors of local artist Scot Lefavor’s comic mural accentuate the mid-mod signature of Xan creative (the team for responsible for Ace Eat Serve, El Camino, and Snooze, among others) which announces itself from almost every inch of the space.

A mixture of cushioned banquettes and chairs face the tables, all well-lit thanks to the floor-to-ceiling garage doors, though the visual experience of the restaurant is outmatched by the sound in the space: boisterous and happening, social—perhaps even to the point of encouraging shouting matches between the closer tables. The din is less noticeable from the second tier of the great room, which overlooks the patio and seating area below.

While Dill is conscious of the customer’s experience, in the end he felt it made sense to sacrifice seats for the sake of the kitchen, which he contends is more extensive than most that specialize in brunch. One imagines, also, that once the spacious patio is finished and the garage doors flung open, the restaurant will not only more than double its capacity, but will also be able to flex more fully the power behind its intense speaker system, letting all the good cheer churning inside to float throughout Cobbler’s Corner. 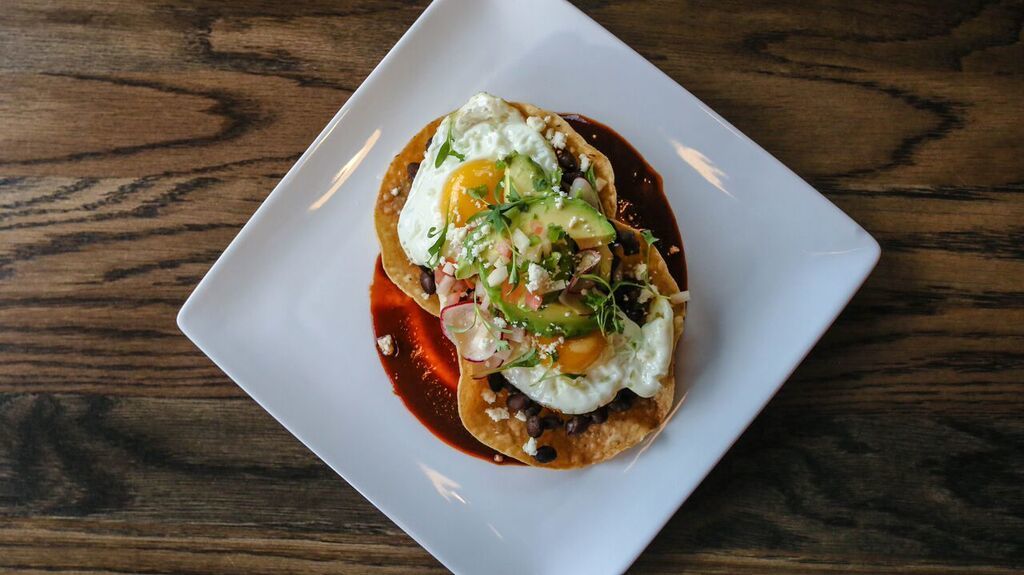 Chef Brian Crow leads the kitchen staff at Bacon Social House, and he worked with Dill and the management team to craft a menu that snuggles up to the restaurant’s name, though not so close as to alienate other dietary preferences.

Starting early, Bacon will serve brunch seven days a week until 2 p.m., at which point a “Social Hour” will commence featuring smaller plates and drinks at discounted prices, picking back up for dinner service at 6 p.m. Fans of breakfast for dinner will find savory and sweet options available, including an adult twist on the French toast dish ($13.50), made with Grand Marnier and bourbon bacon caramel, but will also find plenty of other entrees to choose from. Between the appetizers and entrees there are at least seven gluten-free options and four vegetarian, including an extensive build your own salad ($11.50) category, which allows a mix-and-match of five different ingredients from a long list of them.

As far as the brunch dishes are concerned, the Italy Benedict ($12.5), consisting of speck, polenta cake, balsamic-tomato jam and basil hollandaise and Huevos Rancheros ($11.50) are both tasty savory options, the Grasshopper pancake ($4.50 for single, $8 double, $10 flight of three), a mint chocolate chip, oreo mint whip, chocolate hazelnut sauce and mint syrup concoction that bodes well for the other varieties.

That said, chances are what will make Bacon Social House most attractive for the early-starters and recoverers are its single origin pourover coffees, including an Ethiopian chelchele, Colombian organic popoyan, Sumatran harimu and decaf Colombian sugarcane ($4 for one, $6 for two). Rest assured, the short brunch cocktail list is nevertheless unique and the Bacon Bloodys (with or without actual bacon, which is quite good) speak for themselves. 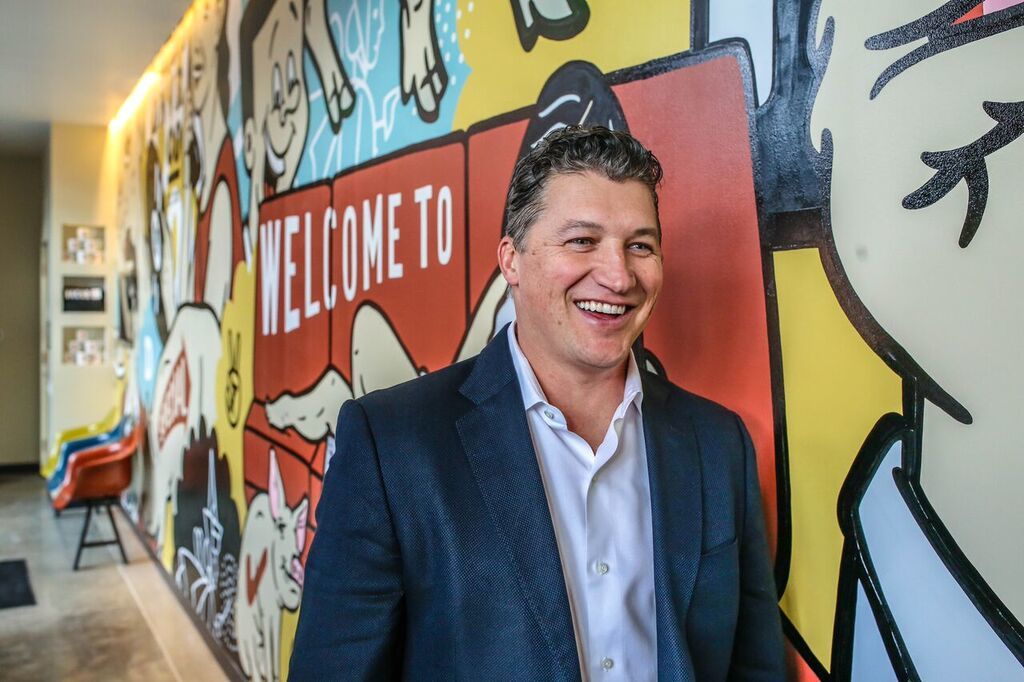 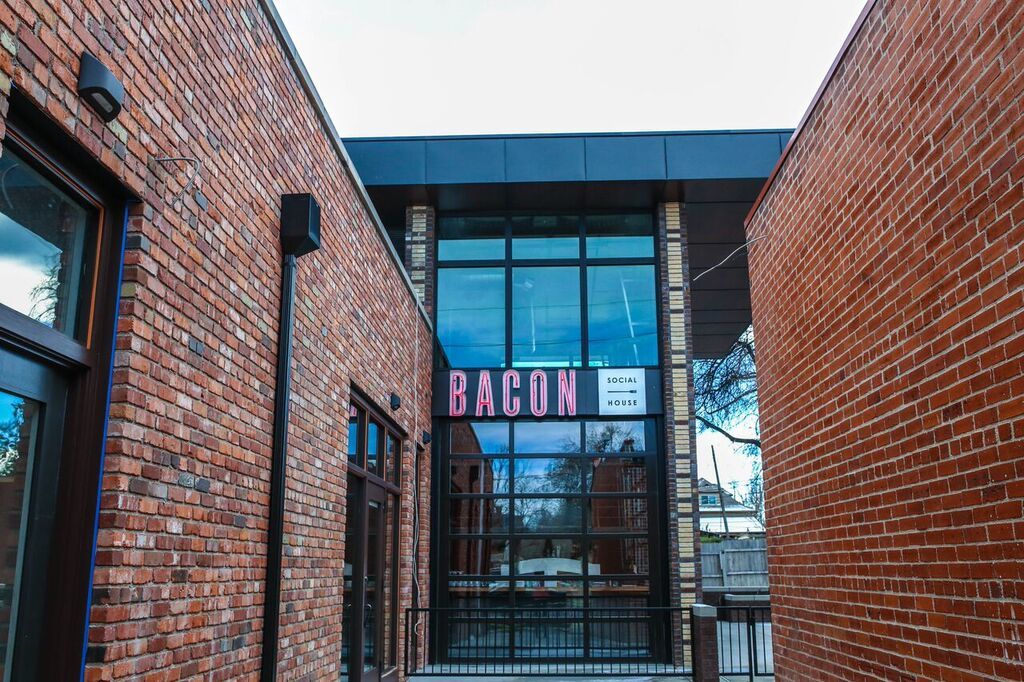 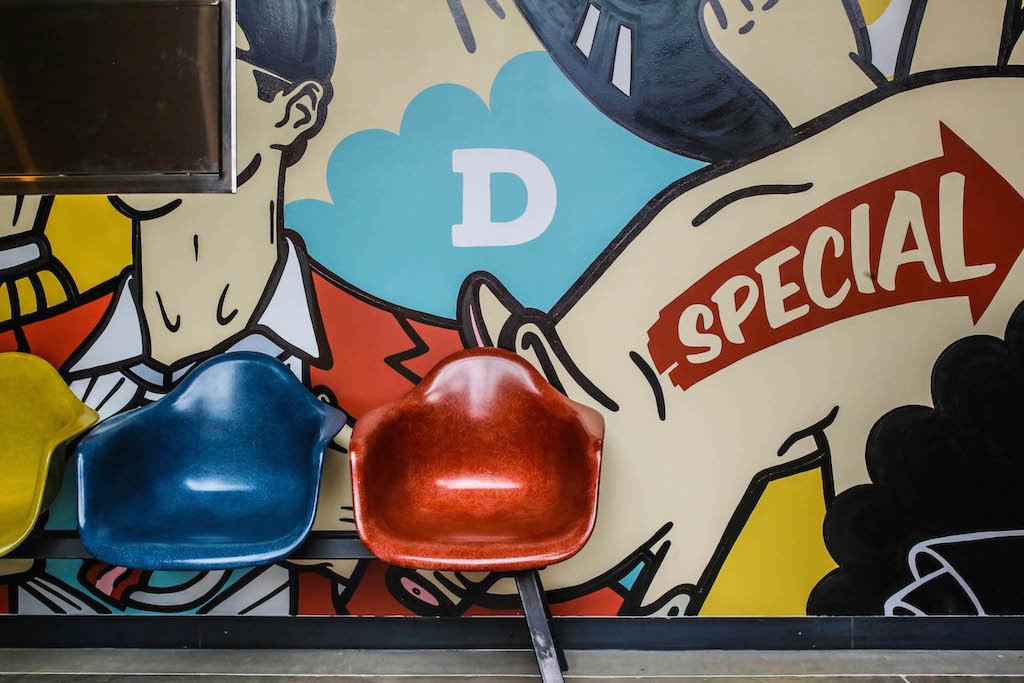 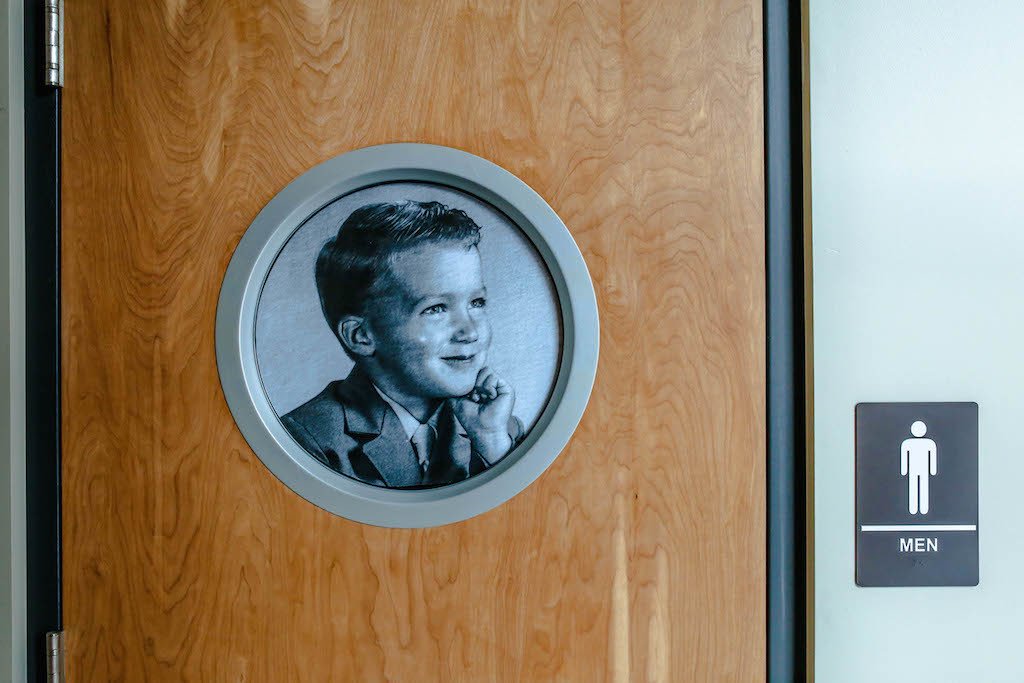 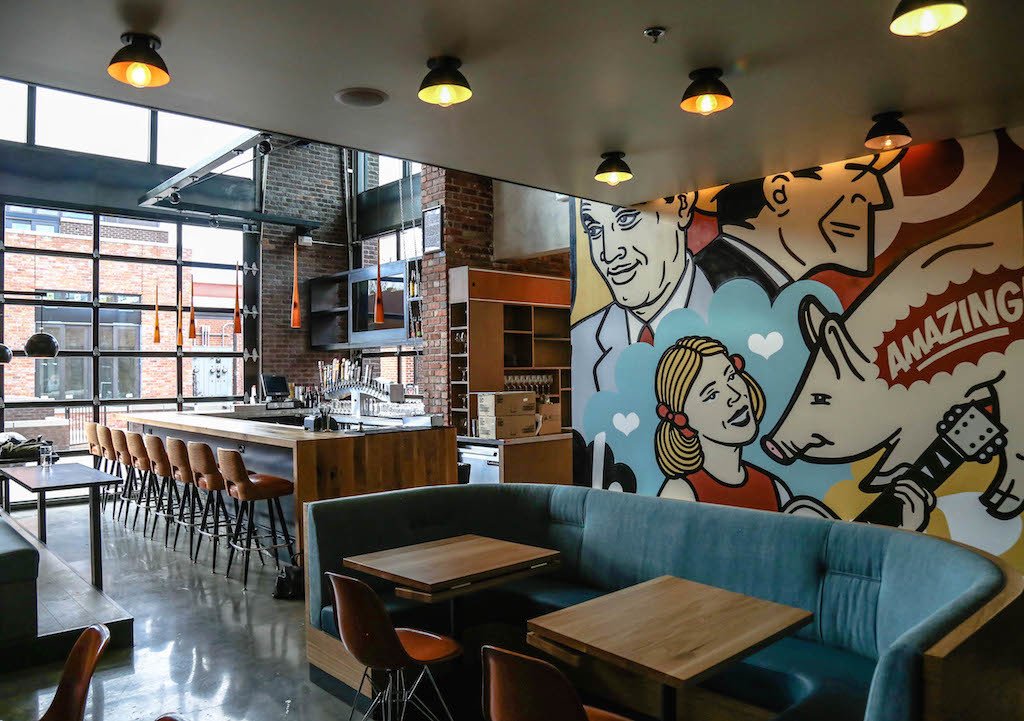 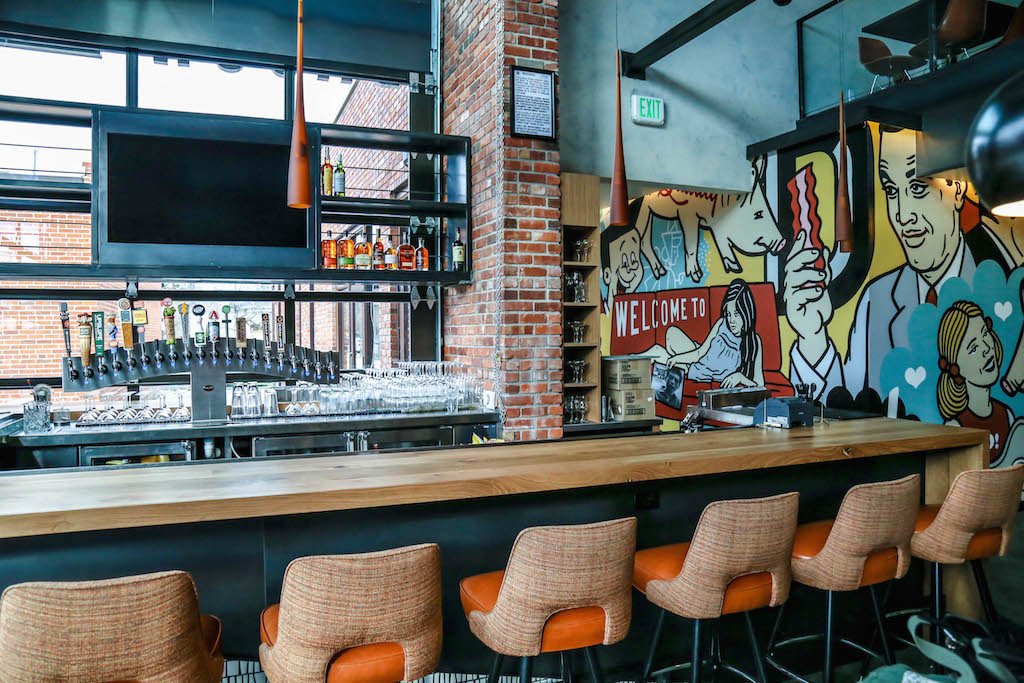 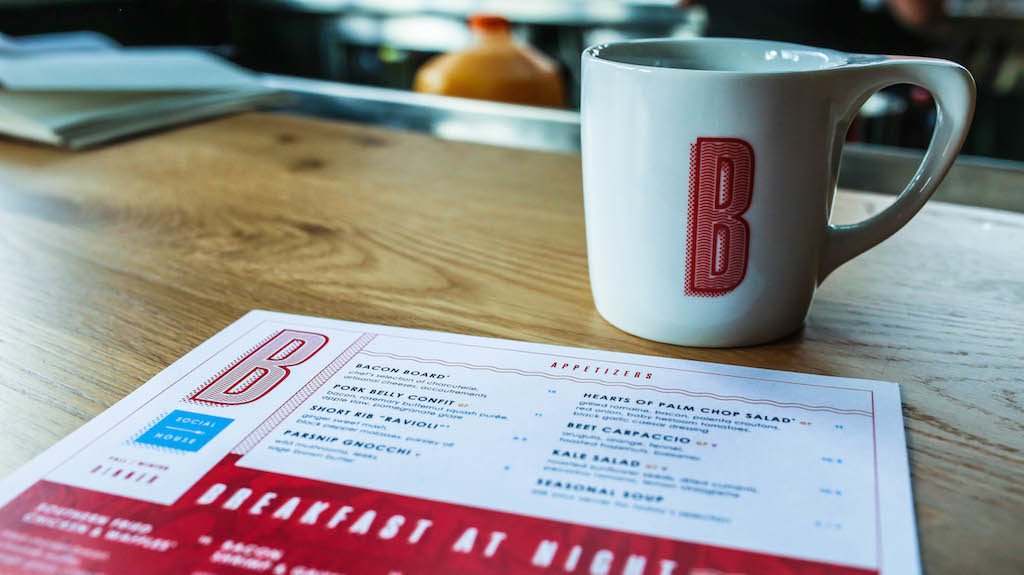 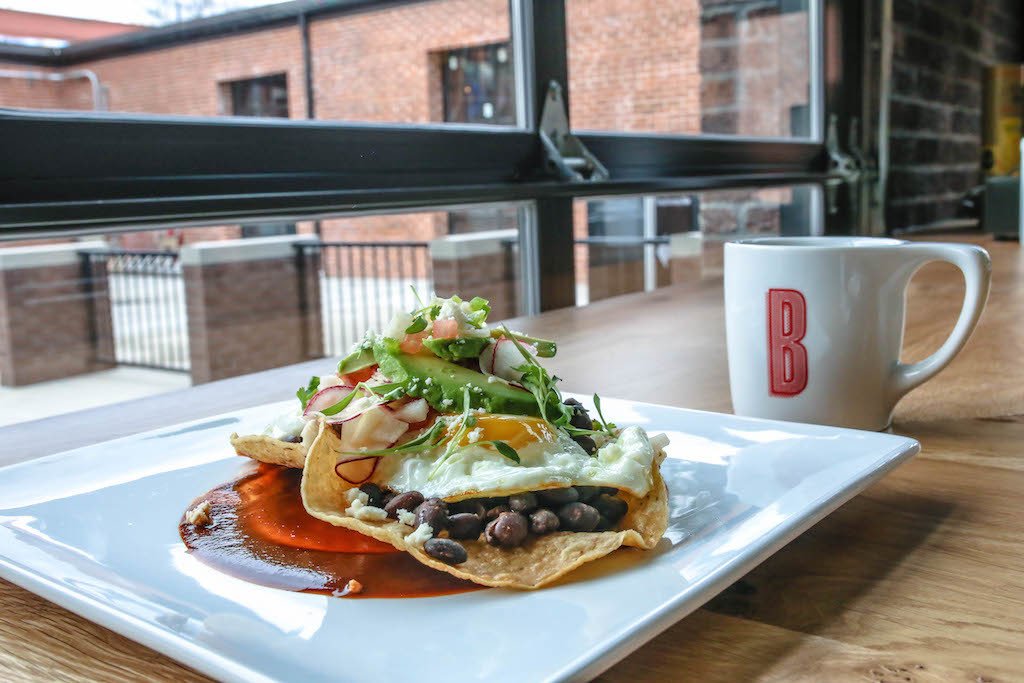 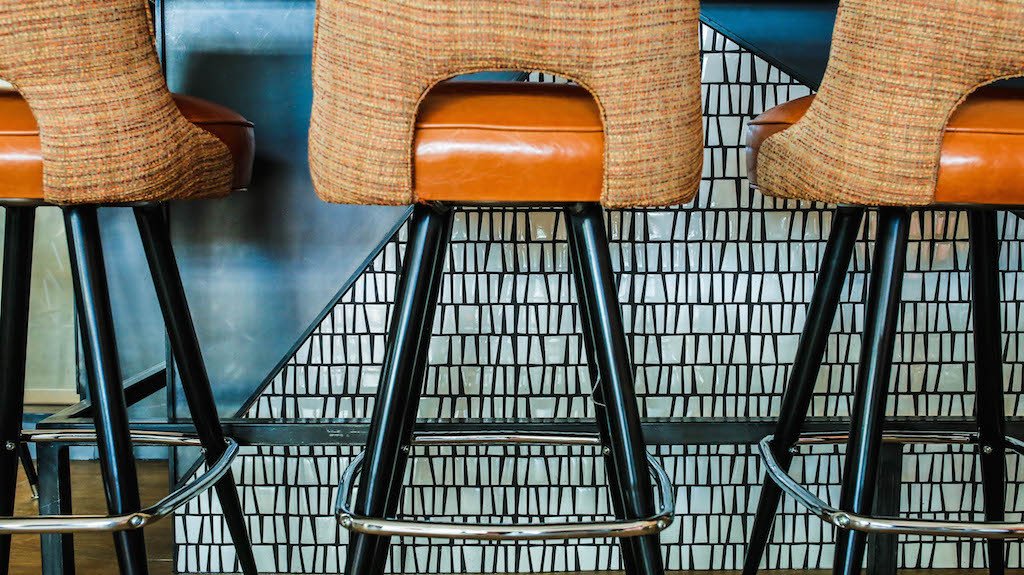