Ru-Ru-Run The Jewels Ran The Ogden 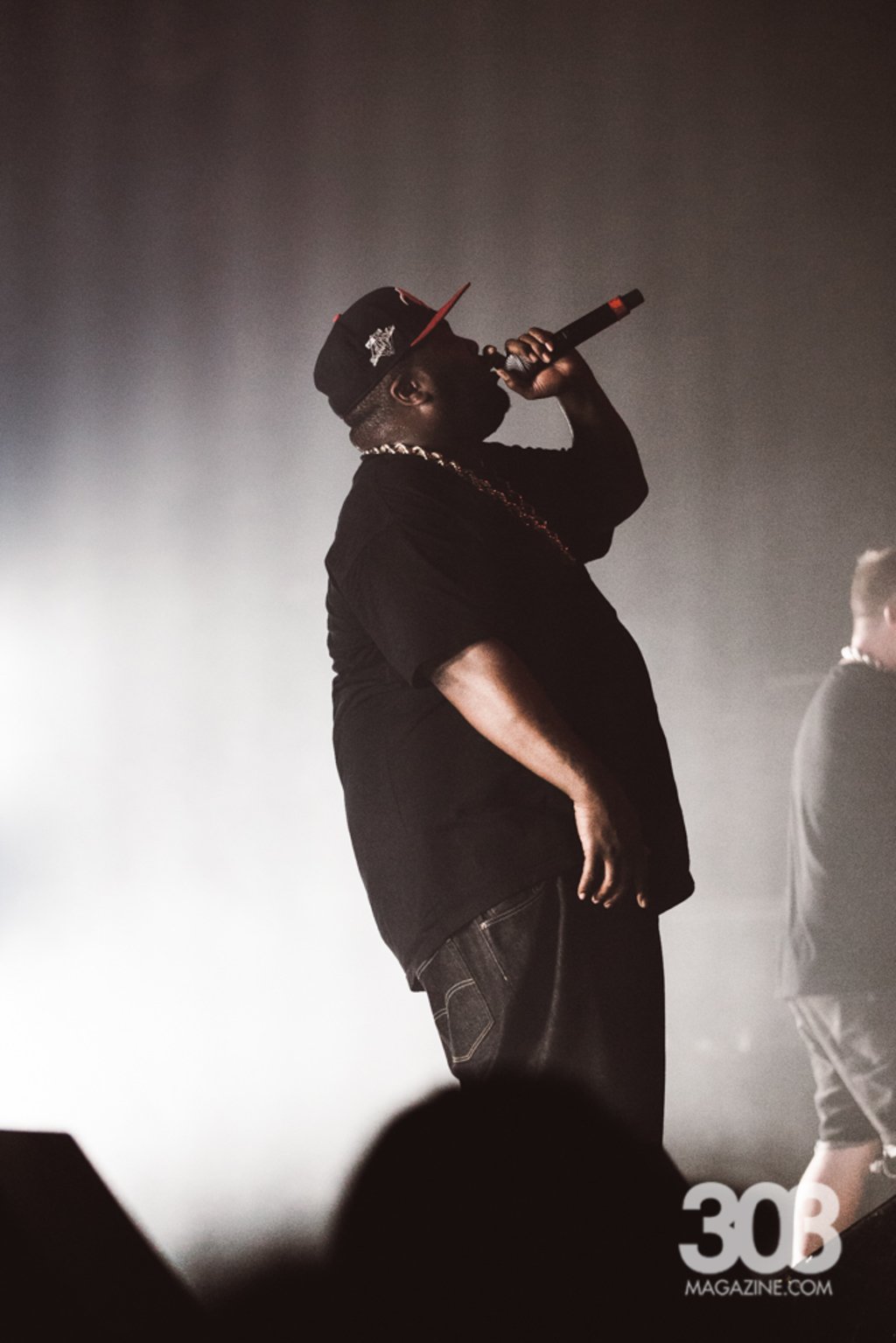 Let’s face it Denver. In this city, one could rage every night of any given month. This week, the mile high city had a little help from our friends Killer Mike and El-P of Run The Jewels. The duo hyped up Tuesday and Wednesday night at the Ogden, filling the venue with rap fans of all kinds. The show was welcomed in the mist of the recent rain, and each patron seemed to stay dry under the protection of their thick golden chains.

First up for the night was Denver based rapper CUZ Lightyear, who also ramped up the beginning of their show last fall. CUZ has been having a killer 2015, with his recent release of CUZ and his feature on the latest Will Brennen single not too long ago, this dude is worth a trip to Soundcloud.
Next up was Fashawn, another returning Run The Jewels opener. This prodigious rapper, who is signed to Nas’ Mass Appeal Records, performed a killer set. Having just dropped his long awaited second album The Ecology, the Fresno, C 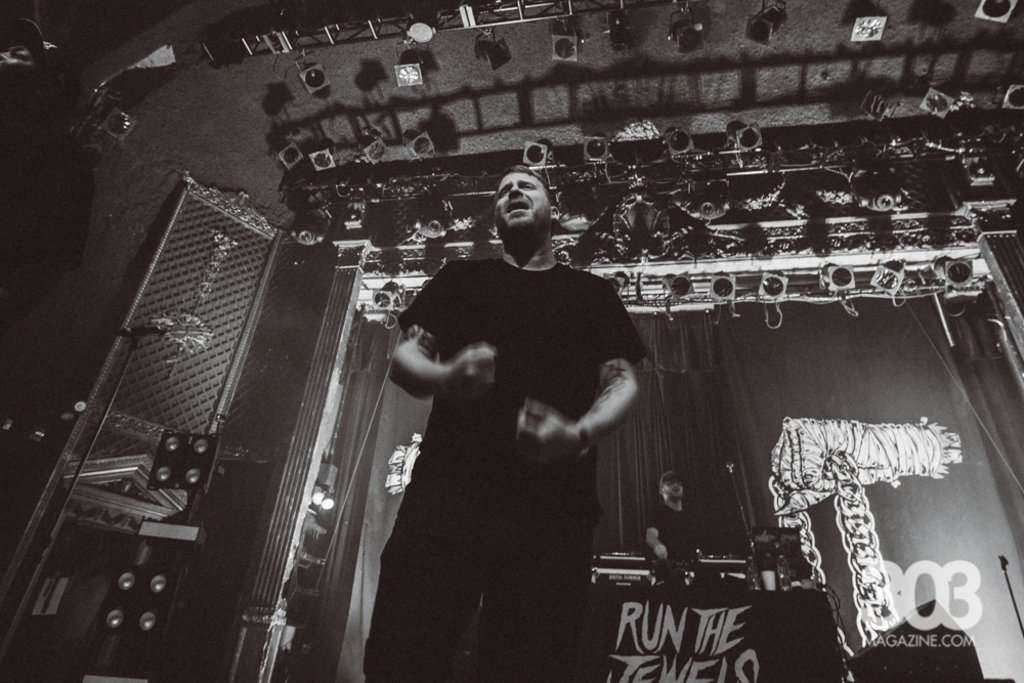 alifornia native got the pre-Jewels show where it needed to be. He and DJ Fresh bumped the patrons of the Ogden along to the new tracks and pointing out a birthday girl in the front row.

During the next set break of openers, the crowd was gifted with an appearance by the two main men of the night, who just stepped out to thank everyone for their time and coming out. They also gave the next and final opener, boots, a great introduction.
Being the majority producer of Beyonce’s Beyonce, Run The Jewels’ Run The Jewels 2, and, most recently, Meow the Jewels, Boots made his way to an audience going wild to hear his performance. Joined by a percussionist and two ladies and their very interesting hair styles on keyboards and vocals, the production heavy set lifted off into a transient ride above musical clouds that any Run The Jewels fan could have predicted.
“Bombs Away” accelerated the set into motion, and from there the set grew into a full fledged freaky dance party, complete with full body gyration from the lead man behind the microphone. No one could deny a presence musical talent. as Mr. Boots himself, decked out in mid-calf boots himself, went from vocals, to beat machine, to guitar all in one small taste of what he and his cronies are capable of. As he left the stage, the essence that he was not done for the night hung in the air.
Just after 10PM, the finger gun and invisible chain toting rappers joined the rest of the Ogden for some main attraction action. 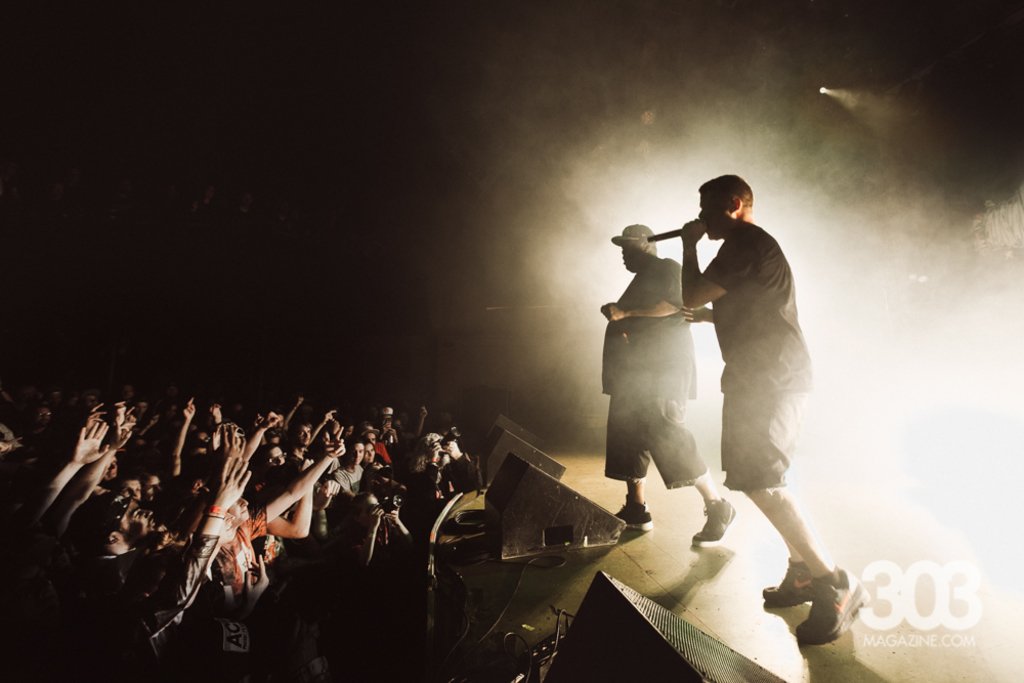 Out rushed Killer Mike and El-P, ready to rock the house. “We Are The Champions” burst out through the stereo, clouds of smoke billowed around them, and Killer Mike yelled “We gonna burn this to the ground for the second night.” The crowd went wild and thus began night two of Run The Jewels at the Ogden.
The two-some started things out with “Blockbuster Night Part One” before calling out to stop the fog machine due to their inexperience with high altitude shows. No one could really blame them though, as with all of the smoke coming from other sources, the room was becoming a little short on breath.
El-P then took the spotlight, reaching out to the crowd in an emotional spout requesting that the audience ignore the haters and instead pretend to have a 36-inch chain around their necks, as to believe in themselves. This was widely accepted and together, El-P and the crowd busted out a solid rendition of “36-Inch Chain.”
“Close Your Eyes,” “Lie, Cheat, Steal,” and “Early”- which was dedicated to those fighting in Ferguson- were all played in true Run 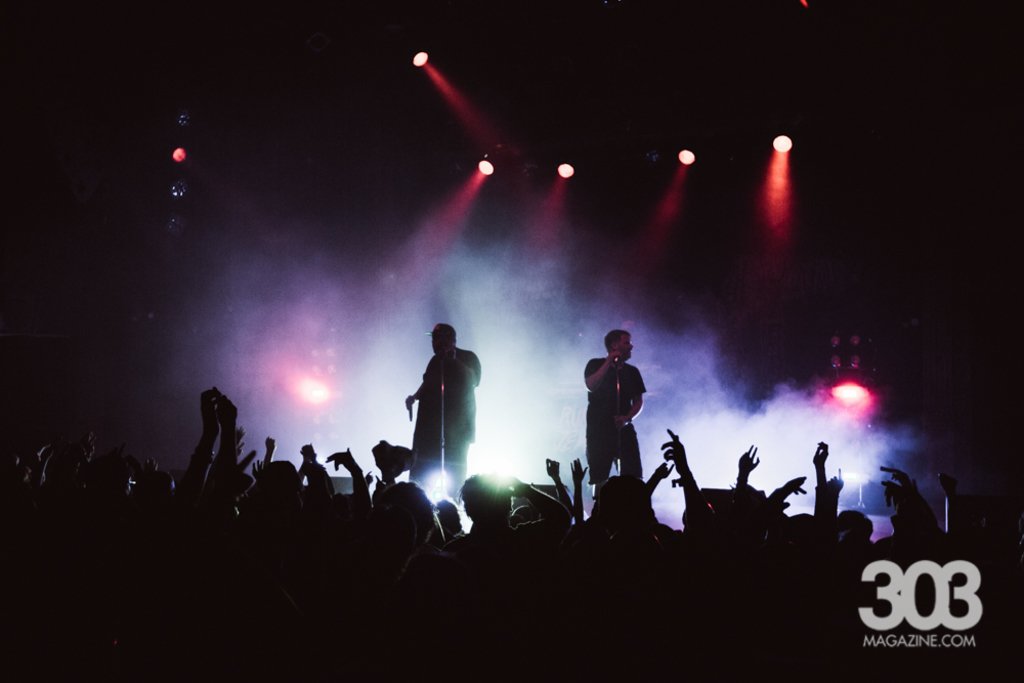 The Jewels upbeat, party-centric fashion. Not one body in the place could resist bobbing along. Boots joined the stage, hopping in to the crowd for a successful surf, which garnered a praise from Killer Mike. “Love Again,” “Get It,” and “A Christmas Fucking Miracle,” rounded out the show, and pushed the fellows offstage once they had finished.

The crowd surely was not finished, however, as they chanted “R-T-J” repeatedly until the two returned. “Born to Shine” off of the new Big Grams album was the first song of the encore, completed with Killer Mike sporting a world champion style belt. They pulled the aforementioned birthday girl on stage, then brought out Fashawn and Boots once more for the final song, “Angel Duster.” As that commenced, the Jewels were ran and the Wednesday night had closed the two evening run. Although they promised to return, soon, and with even bigger chains.