This past weekend, Big Gigantic returned to their home state to put on Rowdytown IV. This two-night event at Red Rocks was a perfect interlude from summer to fall. We couldn’t wait to see what Big G had to offer this time around. We knew it’d be nothing short of remarkable. 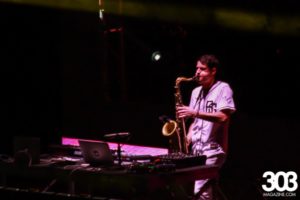 Friday night’s show opened to a sold out amphitheatre with performances by Thomas Jack, Jauz, and Defunk. Saturday followed up with even more solid openers: RL Grime, Snails, and Two Fresh. After entertaining performances by each of these artists, a palpable buzz reverberated throughout the amphitheater as every fan waited for Big G to take the stage. After a thirty minute intermission, no doubt lengthened by the addition of The Motet, the lights dimmed, anxious faces now lit by only the moon, all eyes turned toward the stage searching for a glimmer, a hint, a spark. In one bright moment, prayers were answered and Big Gigantic rushed on stage. Simultaneously the crowd was on their feet and refused to sit down for the length of the show, knowing that they couldn’t sit even if they tried.

Big Gigantic always delivers a solid performance, but this time around it felt like they wanted to offer their audience even more. Spending a total of 4 hours and 20 minutes on stage, the duo played well outside their typical set lists. Friday night contained only one song from their latest album, “The Night is Young”. Big G instead showcased several tracks from their 2009 albums “Fire it Up” and “Wide Awake”. Dominic Lalli summed up Rowdytown when he proclaimed, “We got some new old shit for ya’ll”. In addition to playing older beats, Big G also performed tracks they put together when they were just starting out, including “Phaedo” and “Upswing”. They even played a never before heard track Dom wrote before he and Jeremy formed Big Gigantic. Of course it wouldn’t be a Big G show without some of the EDM crowd favorites, “Let’s Go!” and “Blue Dream”. All in all, the set list flowed seamlessly from one track to the next and provided a wide array of songs for all types of Big Gigantic fans. 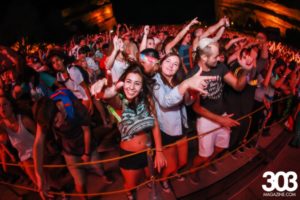 The Motet joined the duo both nights to perform certain covers ranging from modern day hits like Bruno Mars’s “Uptown Funk” to Notorious BIG’s “Juicy”. They also teamed up for some classics like “Limelight” and “Sky High”, which added another dimension of bass and percussion to Big G’s already larger than life performance. While it was a little distracting watching The Motet enter and exit multiple times throughout the shows, they added depth and a new twist to some of Big G’s more familiar pieces. 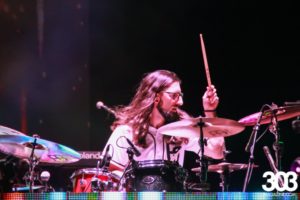 In the past years, Big Gigantic always excited with their innovative projections on the rocks, which incorporated the natural surroundings with unique images that really pulled all elements – nature, atmosphere, style, and sound – of the show together. Unfortunately this year, they just missed the mark. The projectors were repositioned and failed to overlay with one another so images turned out as blurry, weak, multiplied shapes and figures. 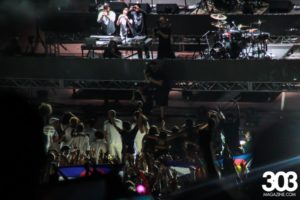 A Big Gigantic Family photo at the end of Rowdytown IV.

Rowdytown IV was a modern day throw back, a thank you note to original fans and a promise to new fans of a future bright with innovation, creativity, and passion. Big Gigantic offered less of their mainstream tracks, sometimes worn thin through the festival circuit, and instead played the music that convinced us to fall in love with them in the first place. As much as Colorado is a piece of their origin story, their music is a piece of ours. Thanks Big G, see you at Rowdytown V.