Curren$y Takes Off from Cervantes on Saturday

Now’s a great time to own a dispensary in Denver—if only because Curren$y is coming to town. Yes, the chronic-blowing pilot is touching down in Colorado for his annual layover this Saturday and heading to Cervantes, meaning those dispensary shelves are going to get a little lighter. Curren$y’s devotees (AKA “Jets,” search #jetlife on Instagram if you’re unfamiliar with the movement) are likely already stockpiling salami-sized joints for the hazy festivities ahead. But first, here’s a quick story. Back in 2013, Curren$y headlined the Zumiez Couch Tour in Denver. At the meet-and-greet, hundreds of hip-hop heads lined up to pay Curren$y respect.Reminiscent of ancient greeks kneeling at the alters of Olympus, reverent fans dropped bud on Curren$y’s merch table like furry green sacrificial lambs.

Yo, this that Trainwreck, thanks Curren$y.”

Having no weed to offer and not wanting to disappoint one of my favorite rappers, I frantically searched my pockets for something, anything. Sunglasses, chapstick, gum. Shit. But then I found the ultimate gift for a god of ganja rap. My turn came and I slapped two slightly warm and squished Rice Krispie Treats (still wrapped) in front of Curren$y. I followed the offering with a line from one of his songs, “High kids still like snacks.” 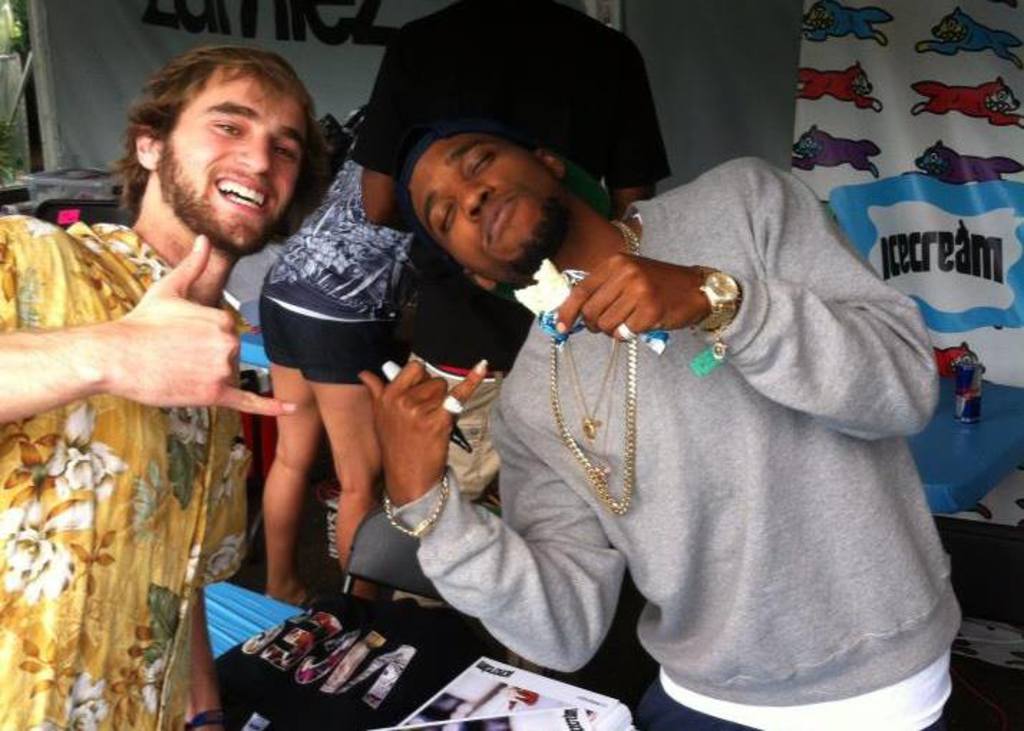 He laughed, “Aw, my man, I’m hungry as a mofucka,” before ripping open a Rice Krispie Treat with his teeth and munching with a gusto enjoyed only by the starving and the stoned.

I share this story with you for two reasons: because 1) it’s one of the prouder moments of my life, and 2) as high as he may be, Curren$y is down to earth.

Since he stepped into the game in the early 2000s, Curren$y’s grind has been constant. He bounced from Master P’s label to Lil Wayne’s label before going independent, releasing a slew of mixtapes that gained a cult following–myself included. Aside from Spitta’s laid-back, syncopated flow, a refreshing aspect of his music is the believability. Catch a show, listen to a mixtape, watch an interview; there’s no bullshit, what you see is what you get. Though Curren$y paints a picture of the swanky frills that come with rap celebrity status — namely weed, whips and women — it’s all unswervingly genuine

In concert, Curren$y puts on the show you hoped for and then some. He’s charismatic, chatting with the audience, pulling joints from the outstretched hands of fans, blazing mid verse while they chant lyrics word for word. He commands the mic like he does the wood-grain wheel of his ’64 — with an old school, lackadaisical lean of confidence — smoking the whole set through to the point that he is his own fog machine. With Pilot Talk 3 and Cathedral released in 2015, following up on 2014’s Saturday Night Car Tunes tapes, there’s plenty of fresh bars in the catalog. Truthfully, though, Curren$y’s backlog is deep and you never know what classics he’ll pull out of his sleeve.

Warming up the tarmac before Curren$y takes off? Reason The Citizen, M.M.E., Future Heroes, Planes! and J-Krupt. Come out for a good time Saturday and don’t forget to bring a Rice Krispie Treat or two—you’ll be happy you did. They don’t serve free food on flights anymore.