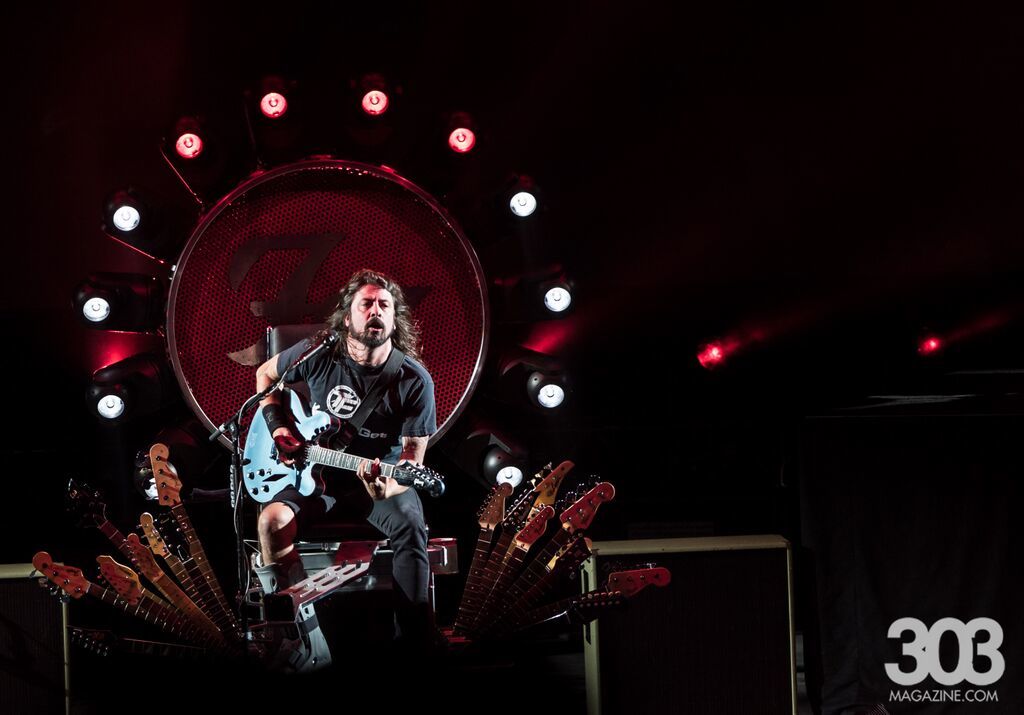 All Photos by Kyle Cooper.

Any conversation about modern rock n’ roll will inevitably have some mention of the Foo Fighters in it. There’s no denying the mammoth-sized stamp Dave Grohl and company have made on modern rock and music as a whole, and their now-classic anthems and larger-than-life stage presence make for one hell of a live show. Ask anybody in attendance at one their shows this past Sunday and Monday, and they’ll tell you the same thing. I was unfortunately only able to make the second night of the Foos’ two-night extravaganza, but as Dave Grohl kept saying throughout their performance, night two has a track record of being even more special than the first night, and in this case, he was right on the money.

British hard blues rockers Royal Blood opened the night and amped up the crowd appropriately. Royal Blood is comprised of two guys: Mike Kerr on lead vocals and bass guitar and Ben Thatcher on drums, and as many concertgoers could be overheard saying that night, they made a whole lotta noise for just being two dudes. Kerr freakishly made his 4-string bass sound like a 6-string Les Paul, cranking out head-bobbing lick after lick which were peppered with hints of rock greats such as Led Zeppelin and Rage Against the Machine in additon to the doomier tendencies of Black Sabbath; they even closed their set with a brief rendition of “Iron Man.” Drummer Ben Thatcher was truly a thunderous presence behind the kit, complimenting Kerr’s dirty southern riffs with a mad groove of his own and providing a solid rock to Kerr’s roll. It became more and more evident as their set went on that Royal Blood are a name for rock enthusiasts to look out for in the near future, and they served as the perfect sonic appetizer to hold fans over for the main course. 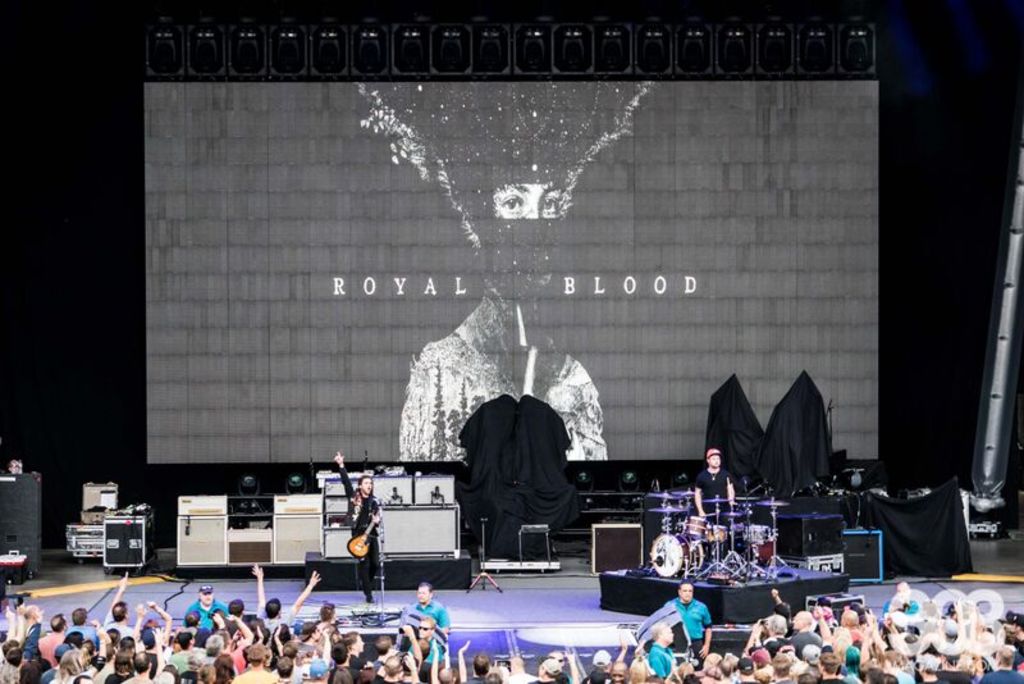 As soon as Royal Blood left the stage, a giant banner adorned by the Foo Fighter’s “FF” emblem dropped, which was met with a large cheer from the audience. After waiting what felt like an eternity, a trash can of guitar chords and drum hits emerged from behind the banner, leading into the opening notes of “All My Life.”  The banner dropped as the full band came in over Dave Grohl, and it was ON. An untamed burst of energy shot forth from that stage and resonated throughout the entire crowd which shot everybody to their feet, a clear indicator that it was time to rock with the one and only Foo Fighters.

The Foos brought it right out of the gate, playing their larger-than-life rock anthems such as “Times Like These” and “Learn to Fly,” which, of course, every member of the audience knew the words to and screamed out at the top of their lungs. Despite Dave Grohl having a broken leg, he still sang, yelled and banged his head furiously like he always does, and he even recounted the tale of how he broke his leg while performing in Sweden, complete with a slideshow, and where the idea for his totally righteous, laser-shooting, Game of Thrones-inspired rock throne on which he sat came from (hint: being drugged up on painkillers and doodling can go a long way). The way he told the story was absolutely hilarious, and is a tale which will likely go down in rock n’ roll history as yet another testament to Dave Grohl’s undeniable rock royalty. He’s got his very own freaking throne to show for it now, after all. 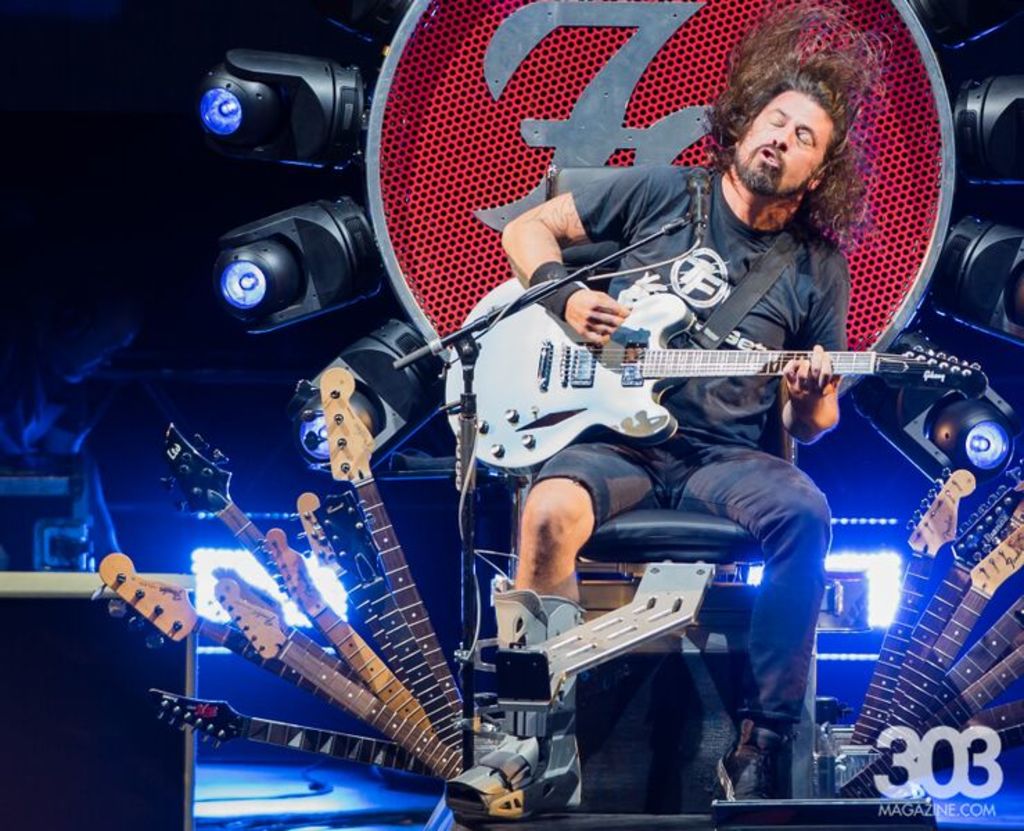 The overall atmosphere of the show was super laid back and casual. There was no real barrier between the Foo Fighters and the crowd, and Dave addressed everybody as if they were old friends. It kind of felt like a house show, except there were about 17,000 people there and the house band happened to be the Foo Fighters. The set list seemed very flexible and unpredictable. At one point, Dave even said he wasn’t going to look at the set list anymore and he’d just see what happened. It seemed like every song they played featured an extended jam section they would add in just for fun, but to great success, as everybody was into it. There was an intermission of sorts halfway through their set, during which Dave hobbled to the extended platform of the stage on his crutches and sat down on a stool with his acoustic guitar and performed the rare “Skin and Bones” and “My Hero” by his lonesome. He commented that this was the first time he’d done this since before he broke his leg, so he wasn’t sure how it was going to go, but he sounded great, and there wasn’t a single person at Fiddler’s Green who wasn’t belting out the chorus to “My Hero” while he played it. 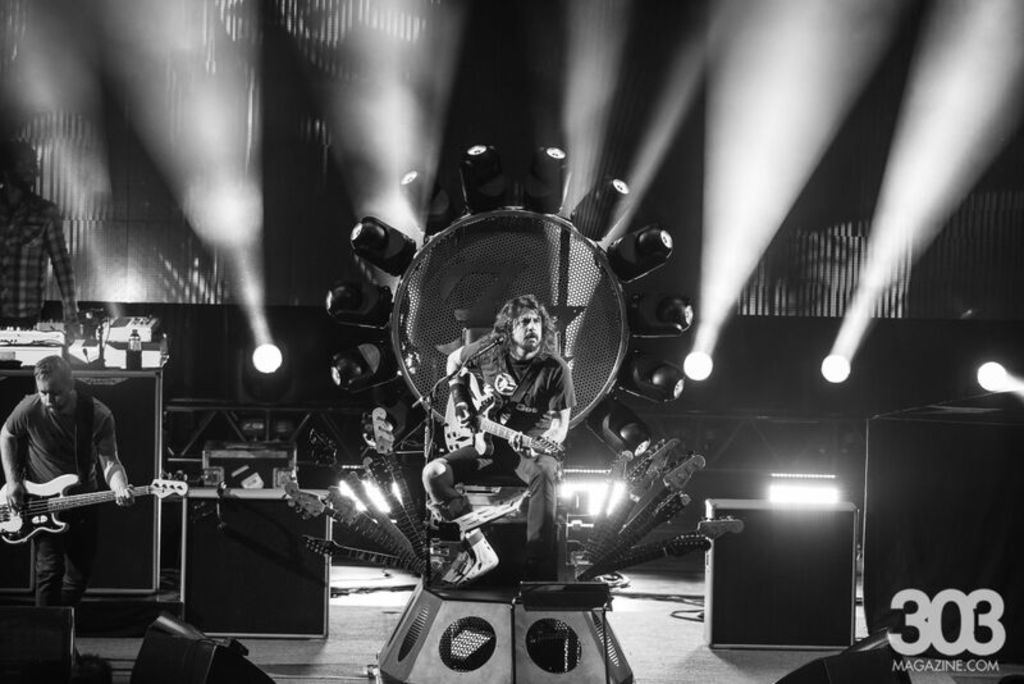 One of the real highlights of the evening came when the rest of the band came back out and they forayed into a spacey, psychedelic jam that turned into “Outside,” one of the best songs off of the Foos’ most recent album Sonic Highways. I was really hoping they would play this song, and I got my wish and then some. Dave Grohl went into an extended guitar solo during the song’s ambient middle section that gave Joe Walsh’s original solo a run for his money, and it was just awesome. Other rare cuts made an appearance in their setlist as well, including “Have It All” from One By One, which marked their first performance of the song in 15 years, as well the cult favorite “Aurora” from There’s Nothing Left to Lose. Oh, they also played “White Limo.” Need I say more? 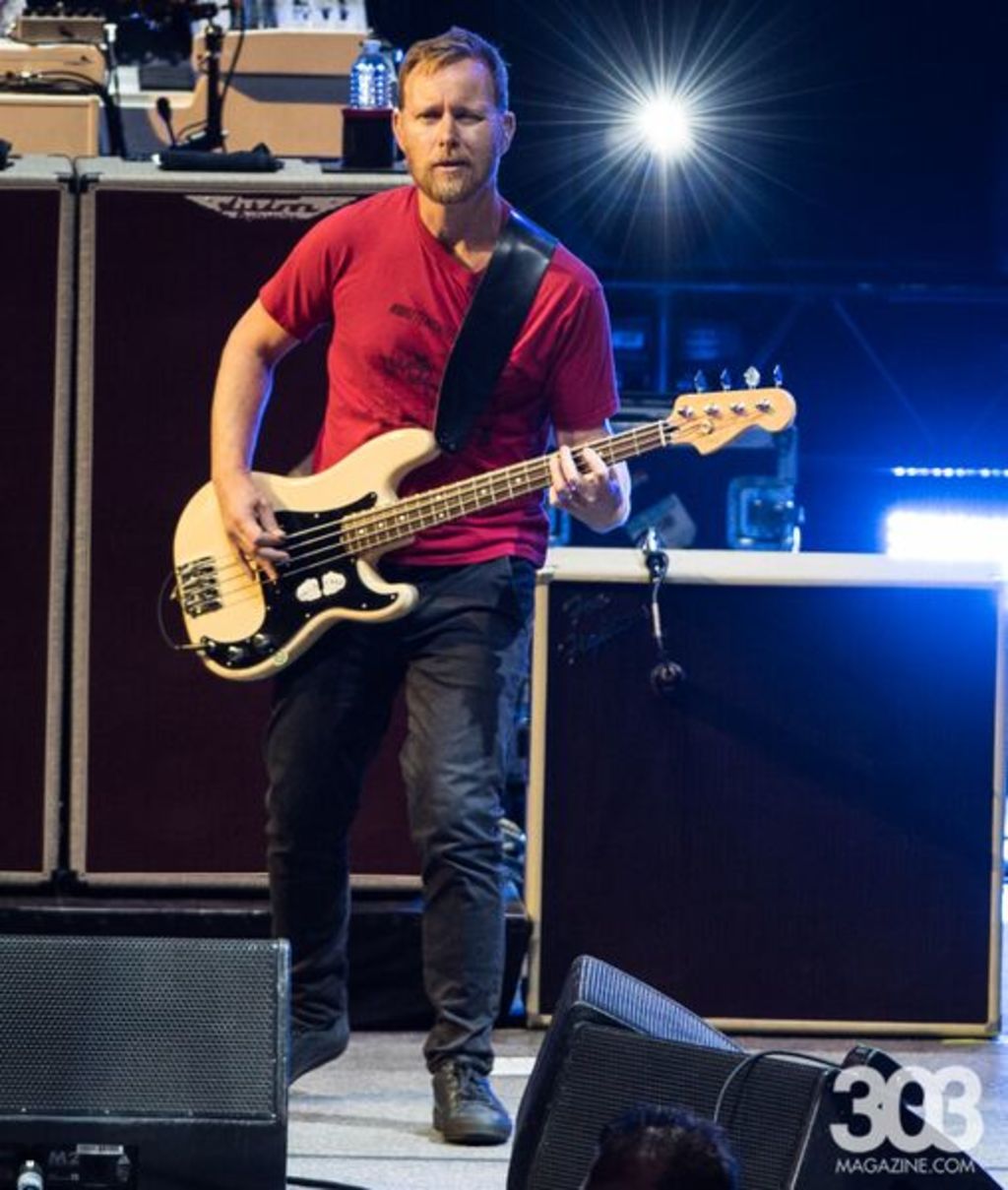 Unfortunately, but as with all great things, it had to come to an end. When it came time for the Foo Fighters to bring their nearly three-hour long set to an end, the band chose the fan-favorite “Everlong,” a timeless anthem whose chorus likely mimicked what the audience was feeling in that moment; namely, that we didn’t want them to stop. In the end, the Foos played an amazing, career-spanning set which was full of surprises, and one that may go down in Colorado history as one of the very best rock shows our great state has ever seen.