There’s no doubt about it, Denver is changing. People are moving in, rents are skyrocketing, and neighborhoods are feeling the burden. Across the city, as communities strain under the pressure of this mass influx, families are struggling to keep food on the table.

In Colorado, the USDA Food Atlas reports that nearly 13.9 percent—or 1 in 7—of  households are “food insecure,” and neighborhoods across the city are turning into food deserts as they face the dreaded grocery gap.

According to the United States Department of Agriculture, food deserts are defined as areas where fresh produce and whole foods aren’t readily available. Generally found in low-income areas, residents rely on convenient stores that offer processed foods that are far from healthy and filled with preservatives.

24-year-old Turner Wyatt, the executive director of Denver Food Rescue, is on a mission to change that. With an ever-growing group of volunteers and partners, Wyatt is working to “fill people’s bellies with things that will actually improve their health” in the most efficient and low-cost way possible: bicycles.

“Nationwide, over 30 percent of all the food produced goes uneaten every year. That means Americans are throwing away 133 billion pounds of food annually.” 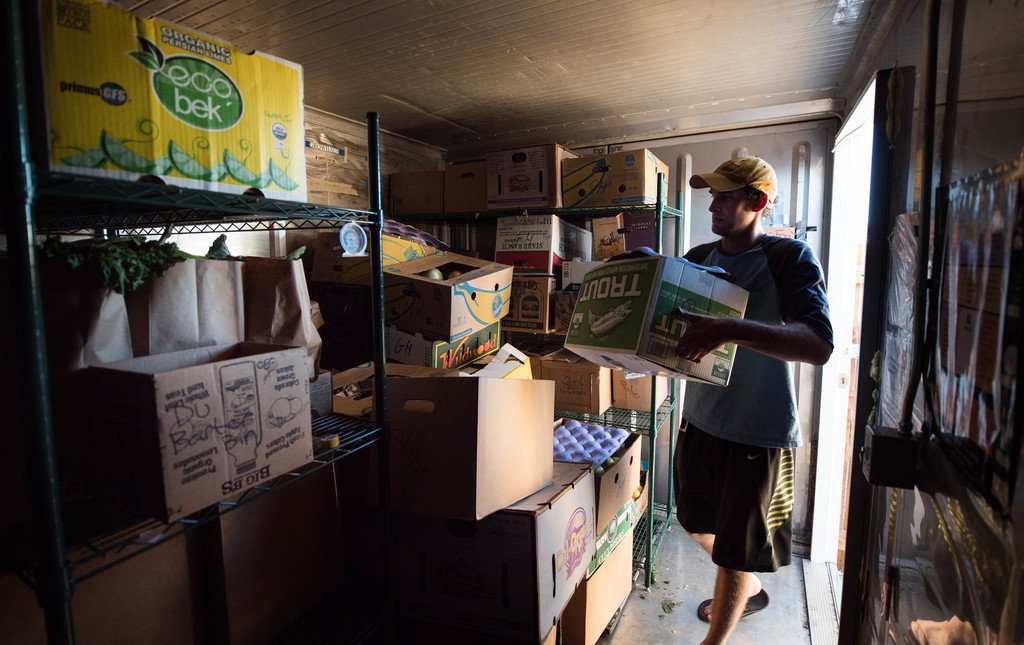 Nationwide, over 30 percent of all the food produced goes uneaten every year. That means Americans are throwing away 133 billion pounds of food annually.

When it comes to solving the hunger crisis, supply isn’t the problem. The biggest struggle lies in transportation and redistribution.

One of the most pressing issues with the current model is inefficiency. As it currently stands, big trucks load up donated products and take it to a center where it is sorted and redistributed up to a week later. This means most organizations can’t even accept produce and other perishable items.

Plus, the traditional food rescue paradigm is broken. “The old way of thinking was that we could solve food waste and hunger by taking all the food no one else wants and giving it to the poor.” Wyatt explained. “But that is problematic, because no one else wants that food for a reason…People are getting sweet breads, snacks, condiments, and soda, and that’s because when you’re giving what’s left rather than giving from the heart, what’s left is not favorable.”

That is where Denver Food Rescue comes in. 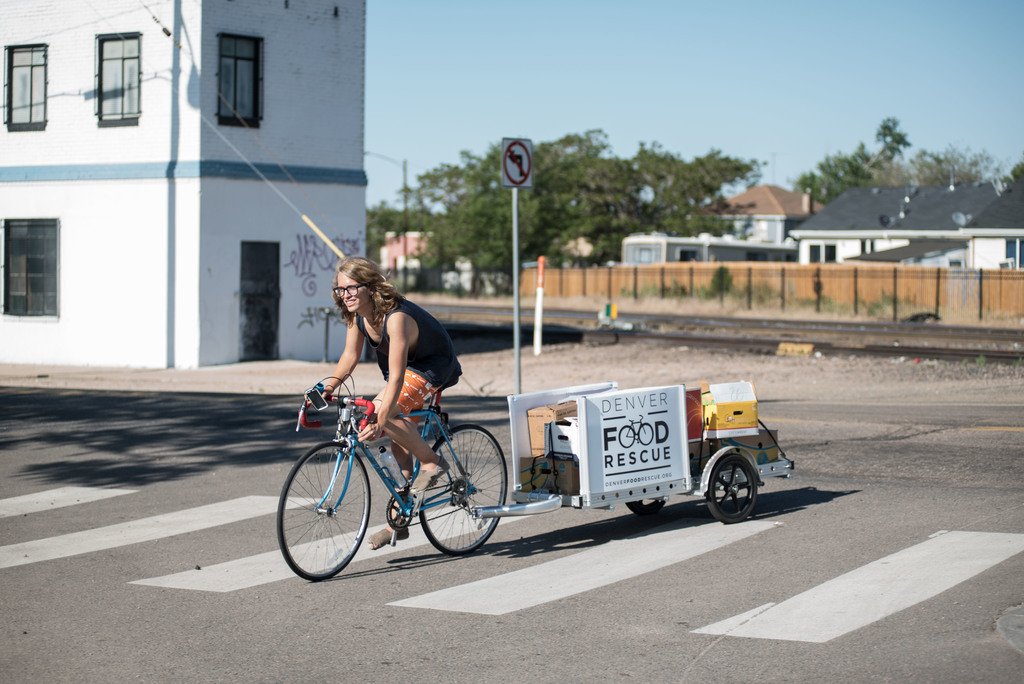 John Knudsen, 22, hauls a trailer filled with fresh produce from Sprouts Farmers Market to The GrowHaus in Elyria-Swansea. Photo by Kyle Cooper

Denver Food Rescue started as a project out of the Boulder Food Rescue, an organization that works to redistribute healthy food to local shelters that serve the homeless as well as low-income elderly housing, and school food programs.

Both organizations fill the efficiency gap by hauling produce directly from the source to the organization in need with a simple bike and trailer; not only does this reduce their overhead and footprint, this “just-in-time” model means that fresh produce won’t spoil before it reaches the people who need it most.

In 2012, Wyatt joined the Denver Food Rescue team as an intern, tasked with bringing the Boulder branch’s processes and best practices to the Mile High. One year in he found that simply copying and pasting the same model just wouldn’t cut it, because Denver is a different city with different challenges.

What Makes Them Unique 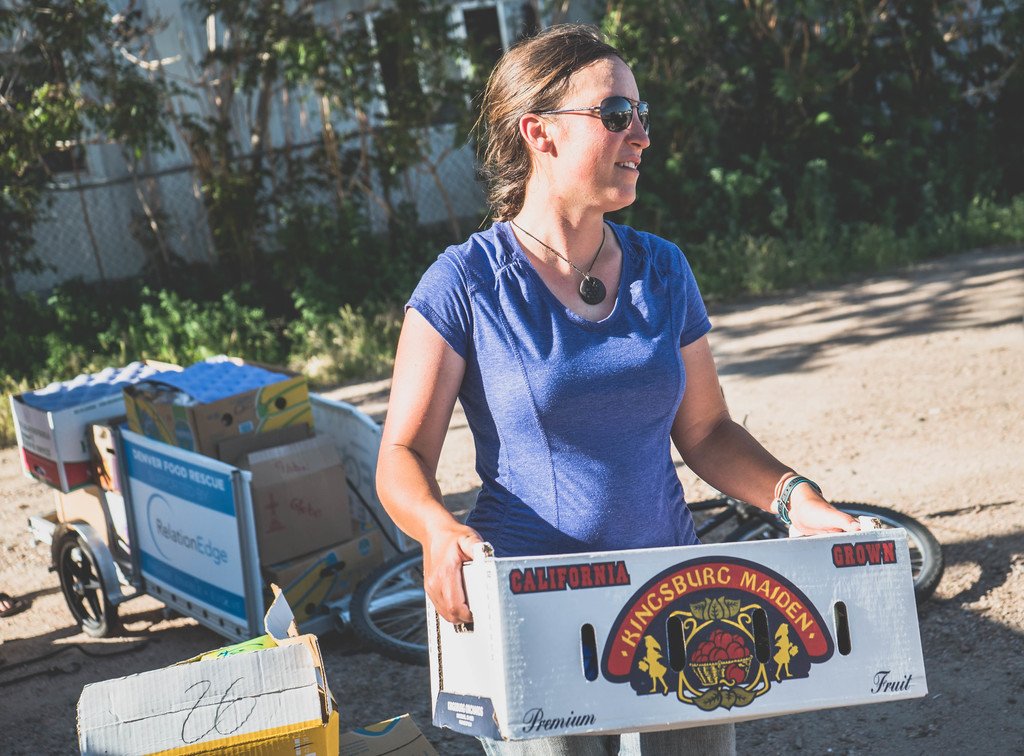 Stephanie Turco, 27, unloads her trailer at The GrowHaus. Photo by Kyle Cooper

After mapping the city’s neighborhoods against census data and healthy food access points, Wyatt found that Denver had special needs. “The areas where people are experiencing negative health outcomes (obesity, diabetes, etc.) are the same neighborhoods that are considered food deserts,” Wyatt explained. “And the cherry on top is that they are more or less devoid of emergency food assistance. In the areas where you think food banks would be most necessary, there are just none.”

Armed with a better understanding of Denver’s unique set of challenges, Wyatt took over as the executive director in 2014, focusing on ways to reach communities in a new way: hyperlocal direct redistribution to areas with the most need.

For Wyatt, though, Denver Food Rescue isn’t about solving the food waste issue, it is, first and foremost, about increasing food equity and partnering with the communities to do so.

But efficiency, brute strength (picture hauling a 200 pound trailer down Colfax in the middle of summer), and a commitment to salvaging fresh produce aren’t the only reasons why Denver Food Rescue is able to affect change and reach 350 families every week; Wyatt and his team are working with the people who live in each neighborhood, opting to partner with communities instead of just serving them. 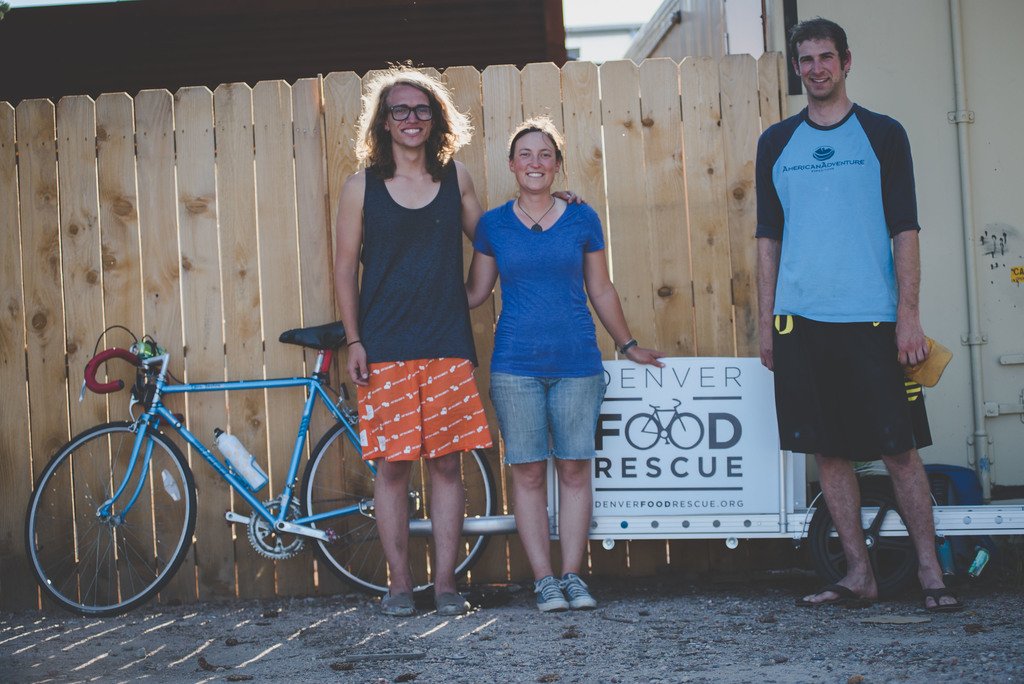 What sets Denver Food Rescue apart is its commitment to working with local partners to build new free grocery programs where traditional resources are essentially non-existent, and tailoring those programs to each community’s unique needs.

“Relationships are at the heart of our work, and is really the most important thing,” Wyatt explained. “If you don’t have the relationships and don’t know people, you can’t support them.”

According to 22-year-old Alicia Perez, an Elyria-Swansea resident and the Resident Promotora (a local community member who helps promote the organization’s work) at The GrowHaus, Denver Food Rescue’s efforts help make their programming possible. “Every week we’re able to send people home with healthy food for their families,” she explained. “And we even use it for our weekly cooking classes that help teach people the importance of healthy eating.”

The non-profit was built around a “resident-leadership model,” meaning the people running the organization (the board members responsible for fundraising and programming) are part of the communities that Denver Food Rescue supports.  “We want to amplify the ‘community commodity,’ or the inherent knowledge, power, and skills that a community has to make itself better,” Wyatt said.

Bweza Itaagi, 23, the former local engagement associate at Hunger Free Colorado, said that community-based approaches like this tend to be the most successful. “Working with the people who live in the neighborhoods tends to produce the most results, instead of just going in and saying ‘Hey, I’m going to help you and then leave.’”

And the city is taking notice.

“We’re excited about the many innovative approaches, like Denver Food Rescue, that are being developed to address the food needs of residents,” explained Blake Angelo, the manager of food system development at the City and County of Denver. “Food access is a substantial challenge for our city, but through partnerships with retailers, businesses, foundations and innovative nonprofit organizations, we are making progress.” 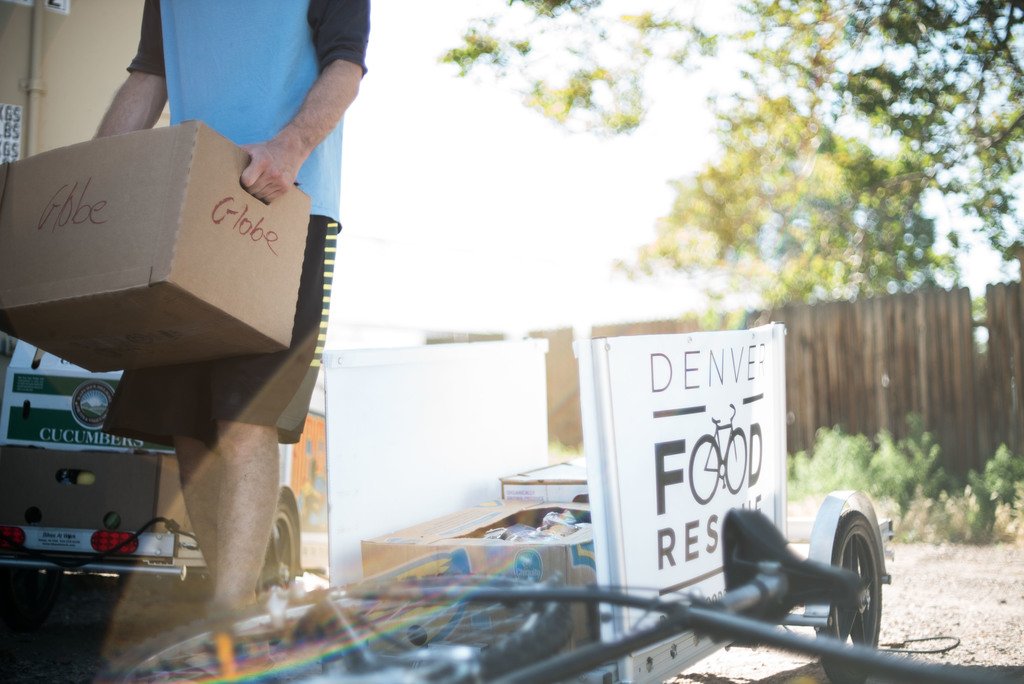 This month, Wyatt and his team are busy preparing for The Denver Food Ride, a fundraiser that encourages participants to come out dressed as their favorite fruit or vegetable and ride 15, 30, or 60 miles for food equality taking place August 29.

And as demand grows, Wyatt hopes to reach more families by building more partnerships, offering more services, raising funds, and growing his team. Just this month, he brought on a full-time operations manager.

The organization is even thinking beyond produce, because people can’t live off of fruits and veggies alone. To fill the gaps he wants to co-create healthy food retail environments in the form of pop-up markets or buyers clubs where people can get some staples (grains, proteins, dairy) for free or at a lower cost.

In the meantime, Wyatt will be working with RTD and B-cycle to offer free bus passes and discounted memberships to residents so they can access grocery stores outside of their neighborhoods.

“By the end of 2015 there are going to be nine programs that will be co-created through Denver Food Rescue in the neighborhoods of Montbello, Green Valley Ranch, and possibly West Colfax.” he said. “We’ll be serving over 500 families by 2016.”