Q&A: Behind the Scenes with Cirque Du Soleil ‘Kurios’ Drummer

Ever wondered what builds the tension and creates the emotions that accompany the amazing feats and acrobatics in any Cirque du Soleil show? Or about how they raise the hairs on your neck or make you gasp at any moment? The music is an essential part of the show and with every new tour, Cirque brings a whole new flavor of music to the atmosphere. The music does more than lend to the show’s visual aesthetics, it makes you feel something more than you may have thought possible at any given moment. The music creates the emotions that flow from audience members as they watch things they never thought humanly possible.

Cirque du Soleil is bringing Denver a new show, called Kurios, filled with curiosities that flow through the human brain, as well as those you never even thought to imagine. The show’s Denver run begins tonight and reviews so far are calling it one for the books. From the costumes and acrobatics, to the timed musical arrangements that are as complicated as a full-length movie score at times, create an experience of magic and otherworldly imagination.

But the music doesn’t just happen–it takes months of preparation, timing, memorizing and getting a feel for the performers’ each and every movement. In short, the attention to detail these people must have is incredible. I had the pleasure of interviewing the band’s drummer and assistant leader, Kit Chatham, who gave us the inside scoop on the wonderful world of Cirque du Soleil. Check it out below!

Cirque du Soleil Kurios begins TONIGHT in Denver. Tickets start at just $42. Get yours today or miss out on the show of a lifetime! 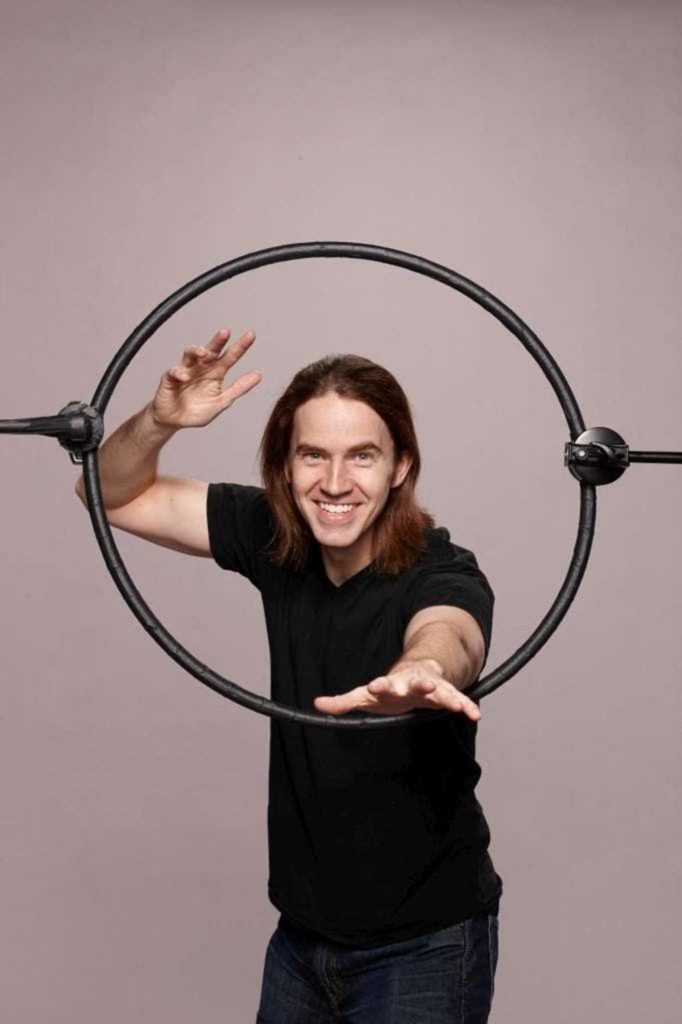 303 Magazine: How does the collaboration for the type or sound of the music to be used come about?

Kit Chatham(Drummer): The initial stages of developing the show’s “sound” are between the director, the creation team, and the composer. From there they work out what style(s) of music they want to explore and the potential sound palette. This also usually includes figuring out the instrumentation of the band for the show.

Audience members are watching the show, but what really brings the tension is the music, how do you all make that happen?

Using musical tension to enhance and support the physical tension on stage can be done in many ways. The classic example of this used in circus for centuries is the traditional drum roll. Just like everything else in the circus, things have advanced quite a bit in technology and acrobatic feats over the years as well as how the music follows the action and supports the show.

The use of dynamics, rhythmic development and suspense chords are very powerful ways to enhance the tension. Placing one or a combination of these strategically in the music at the same exact time of the action on stage makes the listener’s ear want to resolve and strengthen what their eyes are seeing and body is feeling inside. If suddenly drop to a low volume and change to a dissonant chord, it creates this mood of unknowingness and is a dramatic way to signify something’s about to happen. The longer we hold that chord at a lower dynamic, the more tension we can create. From there, we can build and grow dynamically and rhythmically accelerate to create this build in energy and drive to the apex of the performers trick or amazing feat.

Just like with the movie ‘Jaws’, John Williams uses two notes to create tension, the first note wanting to resolve to the next, growing dynamically and slightly speeding up to the point of his attack.

Does the music stay the same from show to show or is there ever any room for a more off-the-cuff set?

Yes and Yes. The overall musical composition including the main melody and harmonies for each song that accompanies a specific act always remains pretty much the same, but the arrangement, musical structure and song length can change show to show. This all depends on the artists on stage and what’s going on behind the scenes. The music has to be able to stretch, move around and jump ahead in a moment’s notice to accurately follow what’s going on stage live. If an artist misses a trick and has to redo it, we have to follow precisely with that and go back to the music for the trick preparation.

As a band, we try to be prepared for anything that might happen. But at the end of the day, it’s still a circus and new surprises can pop up at any time. That is what makes playing with Cirque a unique challenge and always keeps it fresh and exciting.

I always tell people that the music to a Cirque du Soleil show is a living, breathing and evolving soundtrack that is never exactly the same from show to show. 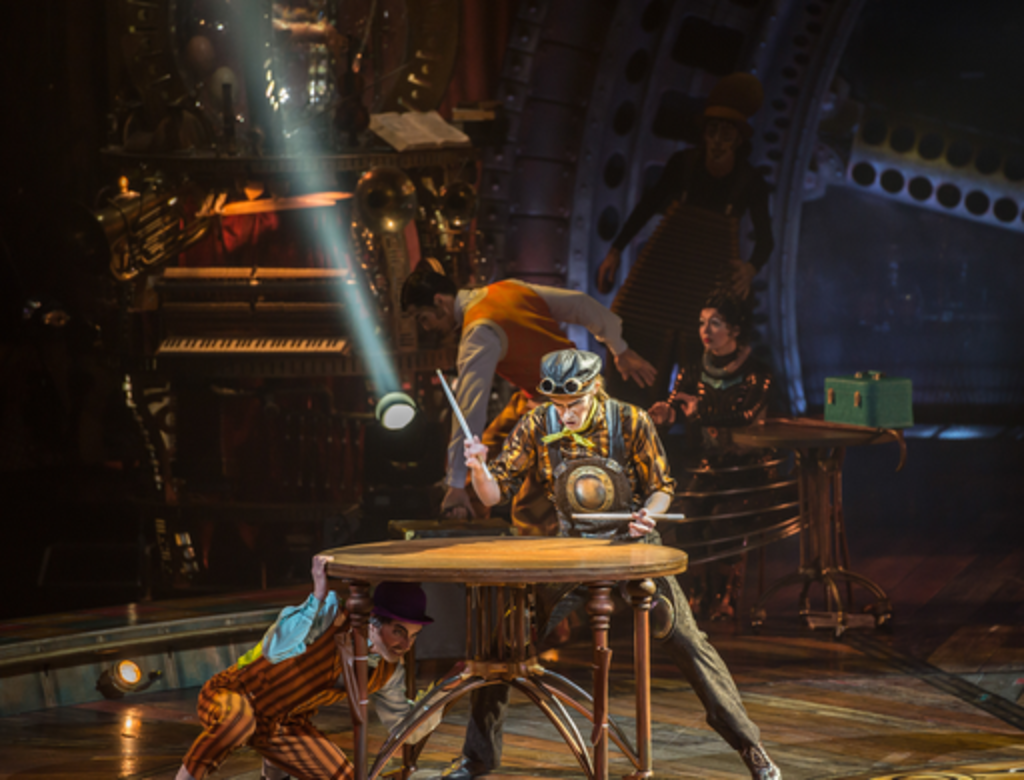 Timing is essential in this show, how difficult is it to monitor every move and apply the right sound?

You’re absolutely right! Timing is not only essential, but crucial in Kurios. Being the drummer and assistant bandleader, timing is probably one of my most important roles. Just like how the music structure follows the act, the timing of the impact points in the act are crucial to the music being supportive and synchronized to the action on stage.

As the drummer, I apply most of the impacts that happen within the musical phrases of the act. The sound fx we use to do this not only has to match the tonality and style of the song, but also the physical dynamic of the action being represented. For a larger musical impact, we can actually change to a new musical section to emphasize the action or can have a full band impact to really make it dramatic.

To make sure we apply these impacts at the right exact time, we have to not only keep our eyes glued to the performer(s) on stage, but also know their body language to know when it’s time to change or even if something’s not right. To be really precise and be prepared for what might come, we have to know the performers’ movements backwards and forwards.

Also regarding timing of the music, about just over 90% of the show is performed with a Click Track. A Click Track is basically a glorified musical term for a metronome that is played into all of our in-ear monitors. This makes sure that we always supply the correct tempo for the performer on stage and not play things too fast or too slow.

This is a way to keep you from playing too slow if you’re tired or too fast if you just drank a Mountain Dew.

Has a trick ever come late or early or just been completely different and somehow affected the music in succinct?

Missing a trick, doing a trick slightly earlier or even being behind on doing a trick does happen. Like mentioned earlier with the music being a “living soundtrack”, the music form and length will change to accommodate if any of these should arise. To allow us to do that, the music is structured in a way that we have musical options and a musical road map.

Given the advanced nature of everything working together in the show, like music, lighting, sound and automation, there is never the chance for a performer to do a trick that is completely new or different without making sure everyone is aware and prepared. Usually if a performer wants to incorporate a new trick or modify an existing trick, we will have a video session to work that into the show and work with all departments to make sure we are on the same page. We definitely like to keep the surprises to things that are out of out control and not someone trying something new without communicating everyone. 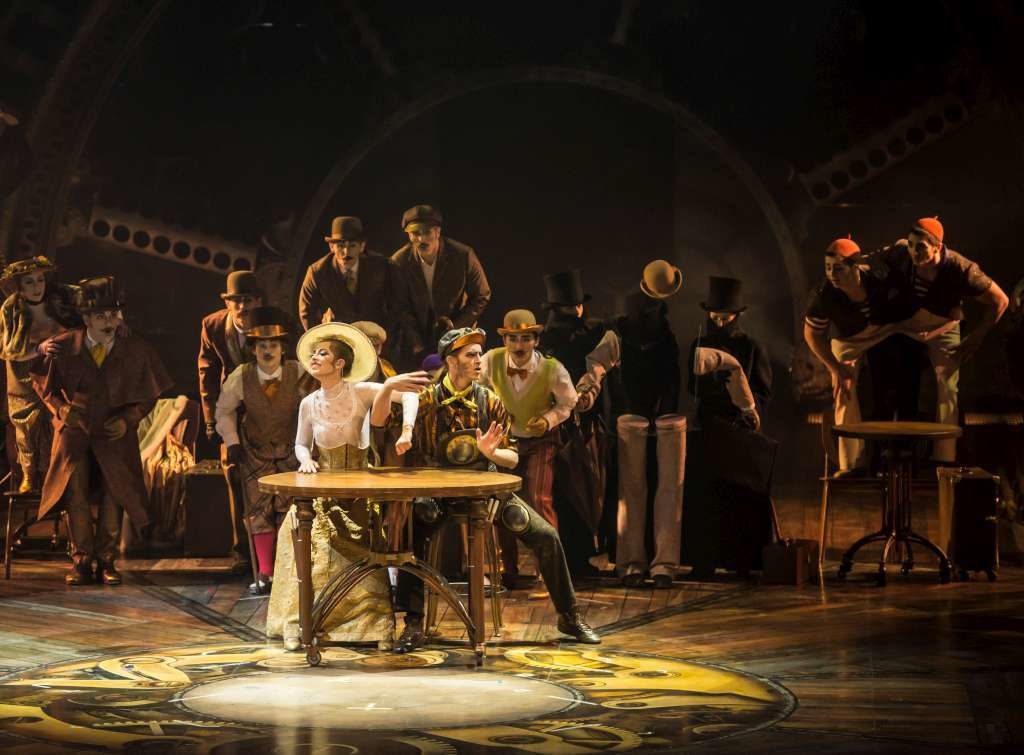 How many people are playing in the band at any given moment?

There are 8 members in the band and at any given moment all 8 can be playing together. This can be tricky since not all of the band can see each other due to our placement in the big band structure called ‘the Turbine’ or if musicians are on stage. The Turbine is the big engine structure in the back of the stage and is a focal point on the stage.

We also use at times accompanying tracks that allow us to thicken the score to more than 8 people as well as add unique sounds to the musical compositions. But that being said about the use of some tracks, the music in the show can also be as simple and eloquent as only one individual playing.

Have you tried to learn any cool acrobatic tricks?

Yes, but it didn’t go so well. When I first joined Cirque over 10 years ago with the creation of Corteo, I was amazed at the act Roue Cyr. It’s basically just a human sized ring that you can manipulate and spin while doing acrobatic moves on. I started working on it with one of the artists for a while and after an unfortunate incident involving my fingers and the big circular pole rolling over them I decided to retire from my roue cyr career.

What’s your favorite part of being on the road with this type of company as opposed to just in a musical band?

Having done a wide variety of touring from Broadway tour, band tours, jazz festival tours and Cirque Big-Top tours, this type of touring with a Cirque Big-Top show allows you more time in a city to really explore everything great about the city and dive into it’s culture. Instead of spending just days maybe a week in a city, we get to spend on average 7 weeks in each city. Having been here many times with other shows like Blast! at DCPA in 2002 and Cirque’s Corteo in 2007, I look forward to enjoying all the great craft beer here, catching a movie night at Red Rocks, running the trails around this great city and even catching a baseball game or two (even though I’m an Atlanta native and huge Braves fan!)

Well, all of that and the health benefits and insurance.

What would you like to say to anyone who is maybe on the fence about seeing the Kurios show?

After performing now with 6 Cirque du Soleil productions and being apart of 3 Cirque creations, I can easily say that this is one of the best shows by Cirque and you don’t want to miss this show. Or you could tell me where you are and I’ll just push the fence… just kidding. But seriously, you shouldn’t miss out on this show. It’s something special.