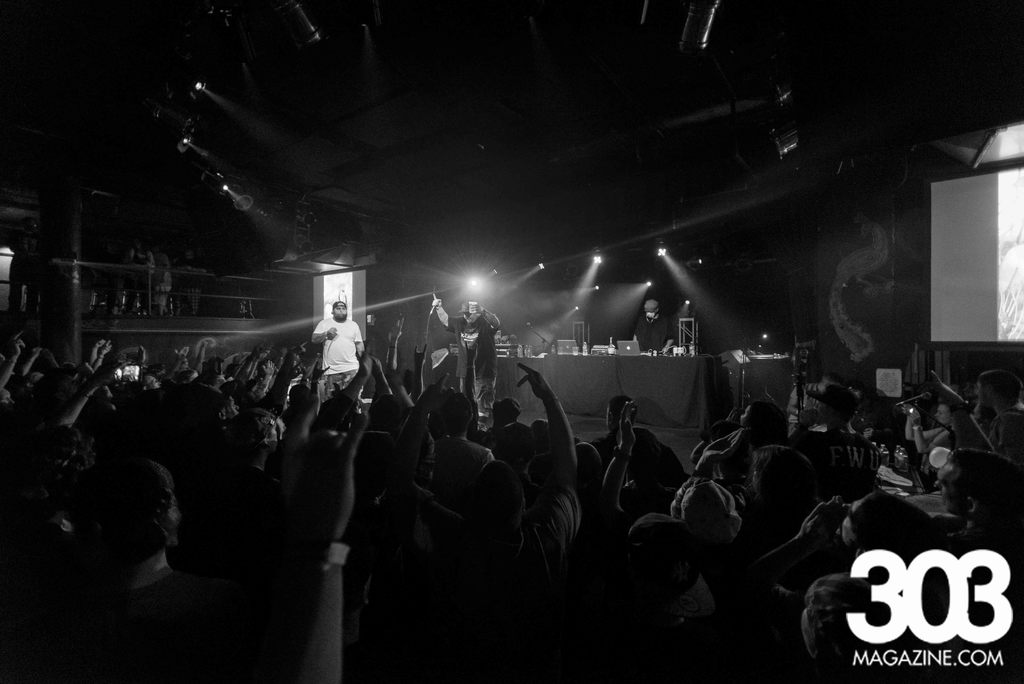 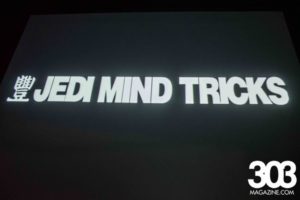 Raw, gritty rap of 1996 was back in full swing Wednesday night with Jedi Mind Tricks taking Cervantes by storm. The classic duo gave the crowd a performance they are not likely to forget, being the first time in Denver in four years.

Flowanation got the group of hip-hop lovers moving first, with a slew of a capella tracks and positive chants involving the audience saying lines such as, “lyrics matter!”

The guys of the group even brought up a tattooed, dancing female to rile up the crowd, she served her purpose as Marz and Briz commented on her style being “so Colorado.”

After Flowanation ended their set, DJ Gatsby took to the right of the stage, bumping great mixes of things like Atmosphere, Tabli Kewli, Jay- Z, and a particularly interesting mix of Brother Ali’s “Truth Is” over Paula Abdul’s “Straight Up.” Gatsby announced to the viewers that he wanted to be the first DJ to play Enya in the building, which received positive reviews from the heart of the audience once played. 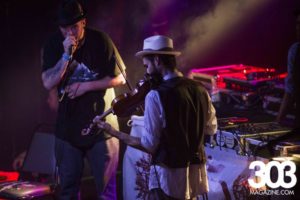 After Gatsby’s first set, Whiskey Blanket took on the spotlight, all three members dressed from head to toe in dapper wear. The group, already a standout at a hip hops show due to their fashions, break out the strings with a violinist, cellist and their producer, Steakhouse.

The set was the perfect bluegrass/rap combo; they danced around on stage as a hip-hop group, however breaking down each song into minute long violin/cello battles to jam. The lyrics were quick and witty, but the merch table housed vinyl in wooden sleeves. The genres were crossed.

“This is the best venue for hip hop in Colorado right now,” the Boulder native called out. “We got started just by messing around, and now a decade later here we are. So live out your dreams! We actually wanted to be a metal band.”

From here, the cellist whipped out his harmonica for a beatboxing/harmonica dance off from his own mouth. Not long after he (Funny Biz) got the song moving, the violinist, or Sloppy Joe, joined in rambunctiously, pushing Biz back onto the cello. After a few minutes of that jam-off, both of the members tossed their bows in the air, while stating, “that really gives new meaning to ‘throwing bows’.”

After a few more songs, including one where Joe rode on Biz’s back, the trio retired for the evening. Gatsby hopped back on up to the tables and grooved the fans right into the part they had all been waiting for: Jedi Mind Tricks. 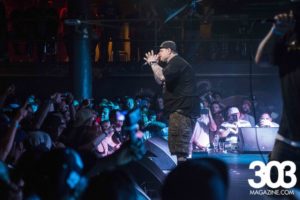 The group today consists of Emcee Vinnie Paz, also of the huge collective Army of the Pharaohs, as well as the veteran group Heavy Metal Kings with Ill Bill, and selective producer Stoupe the Enemy of Mankind. The legends stormed the stage with “Deathless Light” from the brand new album, The Thief and the Fallen, but then quickly took it back to 2006’s Servants in Heaven, Kings in Hell with “Put em in the Grave.” After the second song, the usually rough emcee stopped the show to pull a girl from the mosh pit who already had a broken arm. The legendary group then allowed her to hang on stage for the rest of the show.

Naturally, Stoupe the Enemy was easy to spot, as every time the show went to the beat you could hear the long time fans yell, “STOOOOOUPE,” which he gracefully accepted. 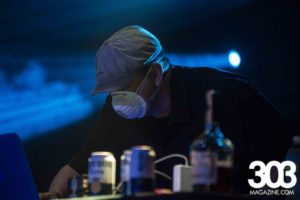 The set was heavy on the newer tracks, as is any tour directly following a new album. After the track “And God Said to Cain” was played, it sparked a rant from Vinnie, stating, “The best emcees were from New York, but Will Smith and Jazzy Jeff used to slay it in Philly,” causing a mix of support and laughter from the crowd. Vinnie then gave a moment of silence to the late Pumpkin Head, who died last weekend. 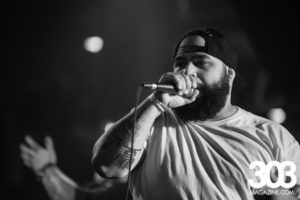 In and out of a few more songs, and after a segment of allowing DJ Question and Stoupe to showcase their amazing abilities, the group referenced Army of the Pharaohs to much of the audience’s delight. Strong imagery played on white projector screens next to the stage, and lighters and phones were held in the air to light up the ballroom. It was easy to see the Mile High city missed Jedi Mind over the last few years, and will continue to support the duo from here to the end. The show wrapped up with the same excitement as it began, and thrilled fans poured out into the Five Points neighborhood still rapping a long to their timeless tracks.