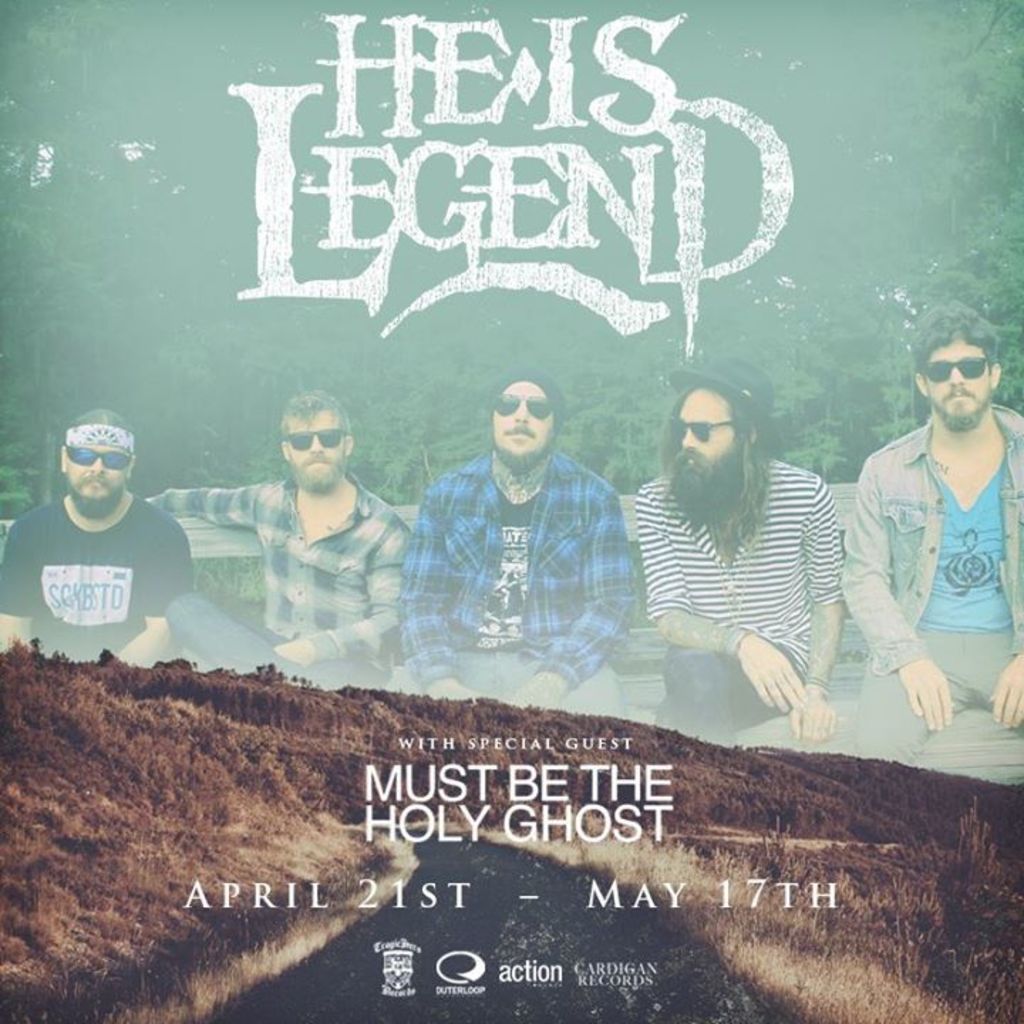 He Is Legend Bring Their ‘Heavy Fruit’ to Denver

The Moon Room at Summit Music Hall is one of Denver’s more casual music venues, a perfect setting for the He Is Legend tour that rolled through on Thurs., April 30. In fact, despite He Is Legend having been around for over 10 years and making quite a name for themselves in hard rock and metal circles, it was clear that they felt very much at home mingling with attendees of the show and stepping out for a quick smoke with fans while local openers Sugar Skulls & Marigolds and Lotus Gait set the tone for the evening. 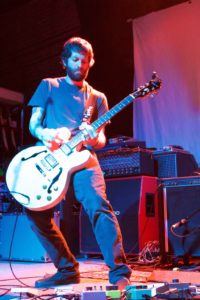 Comprised of the brothers Danny and Andrew Aranow, Sugar Skulls & Marigolds are a two-piece instrumental doom metal band that rock harder and make more noise than most two-pieces. Danny’s muscular riffs and fuzzed out guitar tone reminded me a lot of the pop-sludge leanings of Torche, while Andrew’s ferocious beating of his drums punctuated by a solid backbeat and intense tom rolls called to mind a youthful Bill Ward from his Sabbath days. Writing instrumental doom metal that cankeep the listeners attention is not an easy task, but Sugar Skulls & Marigolds seem to have found a winning formula of balancing interesting musical passages with accessible, head-bobbing grooves. 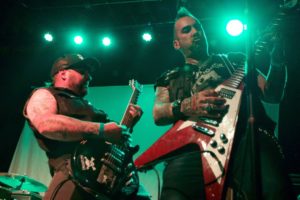 Lotus Gait performs live at The Moon Room on April 30.

Local act Lotus Gait was up next, who describe themselves as “dark black metal punk rawk.” I’m not entirely sure the “black metal” label is accurate, but their punk influences most certainly showed in their performance, along with a prominent thrash metal element, making them more akin to crossover acts such as D.R.I. and Municipal Waste than anything else. These guys have been a mainstay in the local metal scene for several years now, and though their live performance on this particular evening wasn’t as tight as it could’ve been, they still did a great job getting the crowd amped up. Their melodic singing, gang vocals, thrashy riffs and harmonizing guitar duels lend themselves well to a live setting, and given a few more years and a closer refinement of their songwriting, it wouldn’t be surprising if Lotus Gait started getting more national tour offers, particularly on the East and West coasts. 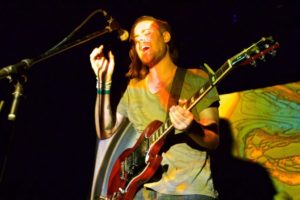 Must Be the Holy Ghost performs live at the Moon Room on April 30.

He Is Legend tour mate Must Be the Holy Ghost was up next, who is actually a one-man experimental electronic outfit comprised of Jared Draughton. He also had another guy with him who ran an old school projector and played around with colored slides to add to the ambience of his live show, but Draughton, with his guitar in hand and various sound, loop and effects pedals at his feet, played all the music himself, and put on a mesmerizing show in the process. 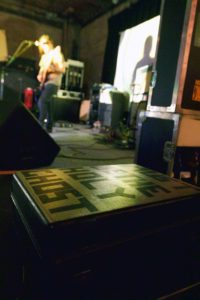 Must Be the Holy Ghost performs live at the Moon Room on April 30.

It was impressive to watch him begin a song with a simple guitar riff and vocal melody and then build those into a stunning climax. He navigated his way seamlessly around his various pedals to create an eccentric, multi-layered sound which seemed appeasing to fans of both electronic and rock music. The most admirable part of Draughton’s performance, however, was his uncanny ability to harmonize with himself. By the end of every song, layers of his own voice in different octaves blended together into a breathtaking chorus that rivaled that of an actual choir. Must Be the Holy Ghost may have been the odd man out on this bill, but his music was no less compelling and the crowd responded very positively to it.

After the more subdued performance from Must Be the Holy Ghost, we’d finally reached the main attraction: He Is Legend. The last time I saw these guys was nine years ago at the Marquis Theater, and it was great to see them on stage again. After taking a two year hiatus in 2009, the band released a new album last year entitled Heavy Fruit, and it saw a reinvigorated He Is Legend ready to take the rock world by storm. Frontman Schuylar Croom greeted the crowd with a friendly “Oh, hey…” and invited everybody to come closer. It was about to get rowdy. 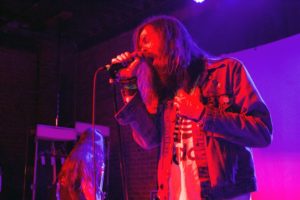 Schuylar Croom of He Is Legend performs live at the Moon Room on April 30.

The band opened with the high energy “No Visitors,” the opening track of Heavy Fruit, and it sent everybody into a frenzy. Next up came “Attack of the Dungeon Witch” off of their 2006 album Suck Out the Poison, and it became very clear that I wasn’t the only one who was excited that He Is Legend are back. The Moon Room isn’t a very big venue, but that didn’t stop everybody from jumping around and getting crazy. He Is Legend ripped through songs both new and old, including “This Will Never Work,” “Everybody I Know Has Fangs,” and all three parts of “China White.” They even played an interlude that featured a cover of Led Zeppelin’s “No Quarter.” Overall, it was a very high energy set that showcased each of their excellent albums and their history as a band. 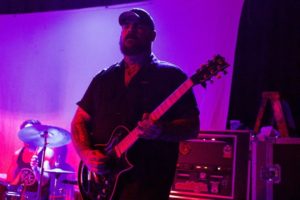 Adam Tanbouz of He Is Legend performs live at The Moon Room on April 30.

From Croom’s enthusiastic stage presence to drummer Sam Huff’s ruthless beating of his kit, everything about He Is Legend’s performance was fantastic. Lead guitarist Adam Tanbouz is an ominous figure on stage, standing well over six feet tall and built like a linebacker, but whether he’s playing a dirty southern riff or a spacey guitar passage, he does so effortlessly, and I swear he played their whole set with his eyes closed. They closed the night with fan favorite “The Seduction,” from their first album I Am Hollywood, capping a memorable performance that only further proved that He Is Legend are one of the best rock bands around. It sure is good to have them back.

Words and photos by Aaron Lambert