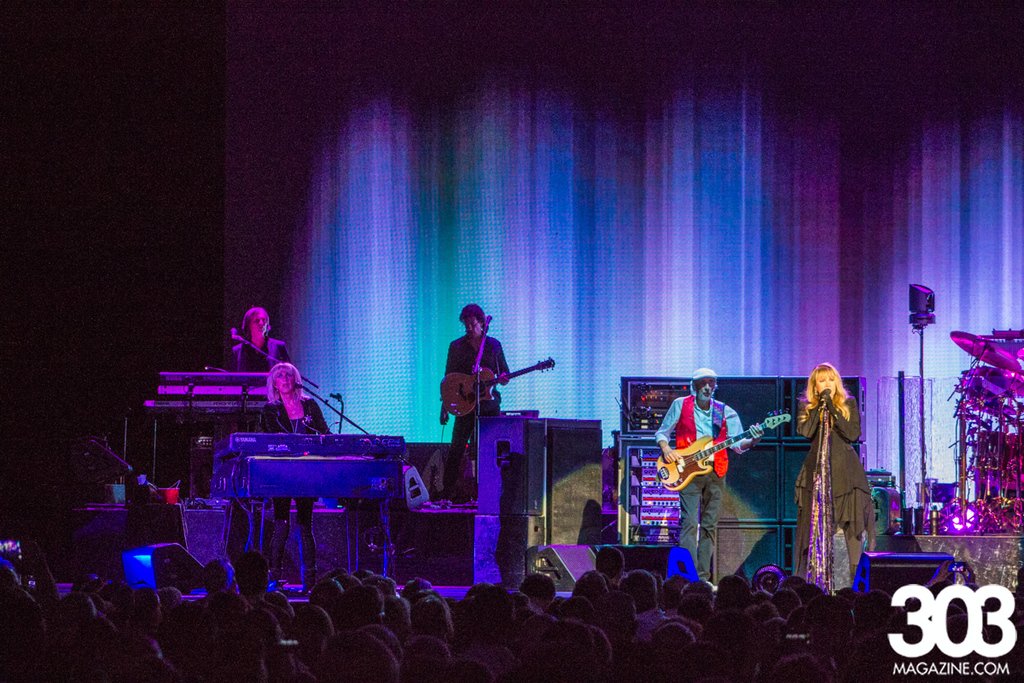 Fleetwood Mac: On With The Show

Timeless. Passionate. Enthusiastic. Vintage. Cohesive. As I reminisce on the concert Wednesday night, these are the first adjectives that come to mind — the latter being the most prominent. The band is whole again for the first time since 1997 and noticeably reenergized; Christine McVie’s presence (who’s now been back with Fleetwood Mac for 73 shows) served as the catalyst for the entire set.

The ravenous Pepsi Center crowd greeted her with thunderous applause on multiple occasions and the band’s excitement was palpable as well; Lindsey Buckingham, Stevie Nicks and Mick Fleetwood each took a moment throughout the evening and expressed their ecstasy for McVie’s return to the stage after a nearly 20 year stint. “She’s baaaack,” Nicks exclaimed following a beautiful performance of the McVie classic, “You Make Loving Fun.” On with the show indeed.

With McVie back in action, stoic and lovely behind the keyboard, the 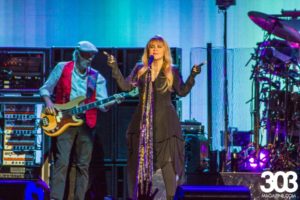 band fired on all cylinders and thundered through an incredible setlist, beginning with a boisterous and harmonic “The Chain.” And just like that, Fleetwood Mac had the crowd in the palm of its hands. Mick Fleetwood’s drums knocked the Pepsi Center right in the chest and grabbed the crowd’s attention immediately, while the backbone, and rock, of the band, bassist John McVie, laid down the rhythm, all of which culminated into that rich, wonderful sound we’ve grown so accustomed to. Other hits played in the first half of the show included “Second Hand News,” “Rhiannon,” and “Everywhere.”

Then, Lindsey Buckingham took command of the stage. After a brief monologue focused on the band’s renewed exuberance, resilience and ability to prevail through the good times and bad, he owned the limelight as he motored through songs from 1979’s Tusk including “I Know I’m Not Wrong,” the title track, and was rejoined by his bandmates for “Sisters Of The Moon.” The show slowed and embraced a melancholy tone as Nicks and Buckingham shared the stage to perform “Never Going Back Again,” and the iconic “Landslide.” With so much pain, emotion, and turmoil present in these songs’ lyrics, coupled with an unbridled passion from two performers singing about their romantic history, it made it nearly impossible to avoid a sensory overload in the crowd. It was truly a beautiful moment onstage; a type of moment that instantly cements itself in one’s memory forever.

Throughout the evening, McVie’s vocals proved the perfect contrast to Nicks’. They are both unique in their own right, providing a wonderful dichotomy. In a sense, the band has interchangeable personalities, all of which are encapsulating. Whether it was Buckingham’s intense stage presence, searing guitar solos and haunting vocals, Nicks’ omnipotent and unique falsetto, or McVie’s beautiful songbird voice accompanied with upbeat, melodic sounds, Fleetwood Mac commanded the undivided attention of everyone present. There was an immense buzz of energy in the arena from start to finish.

Other notable performances included the autobiographical “Gypsy,” the melodious “Little Lies,” “Go Your Own Way,” and a thunderous drumsolo from Mick Fleetwood in the middle of “World Turning.” The night 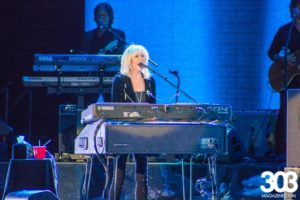 ended on a beautiful note as Stevie Nicks belted “Silver Springs,” leaving the crowd in a euphoric state of mind. A perfect cap to a great evening.

Fleetwood Mac’s timeless sound brought together a diverse crowd, consisting of baby boomers and millennials alike, and reminded us all the power of music. Music (especially music of this caliber) has the ability to unite people from all walks of life and to trigger emotions and memories. It provides us a brief respite from the pressures of the world and worries in our hearts and minds. Let’s hope that Fleetwood Mac continue to inspire, tour and make music for years to come.