Doomtree ‘Bangarangs’ Through the Gothic

Denver’s Gothic theater was lucky enough to get on the lineup of the rare group tour on Friday, stuffing the venue with devout fans of the genre bending sounds from the great white North. 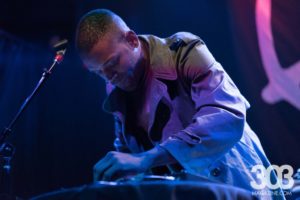 Hellfyre Club artist Busdriver  greeted the stage in a full-length trench coat, taking little to no time in getting his show started. The crowd moved willingly to songs like “Retirement Ode,” “Ego Death,” and “Eat Rich” off of his latest album Perfect Hair. There are many ways to feel about a set as interesting as Busdriver’s, and he makes it a one of a kind experience with his mind blowing lyrical spitting abilities.

As the beats pounded against the walls of the Gothic, you could sense a longtime fan base amongst the bodies jumping and voices singing along to tracks like “Imaginary Places” off of the 2002 album Temporary Forever and “Unemployed Black Astronaut” from the 2005 album Fear of a Black Tangent. Busdriver finished his set with more unruly quick paced rapping and then joined the patrons by the merch counter for some one on one interaction. 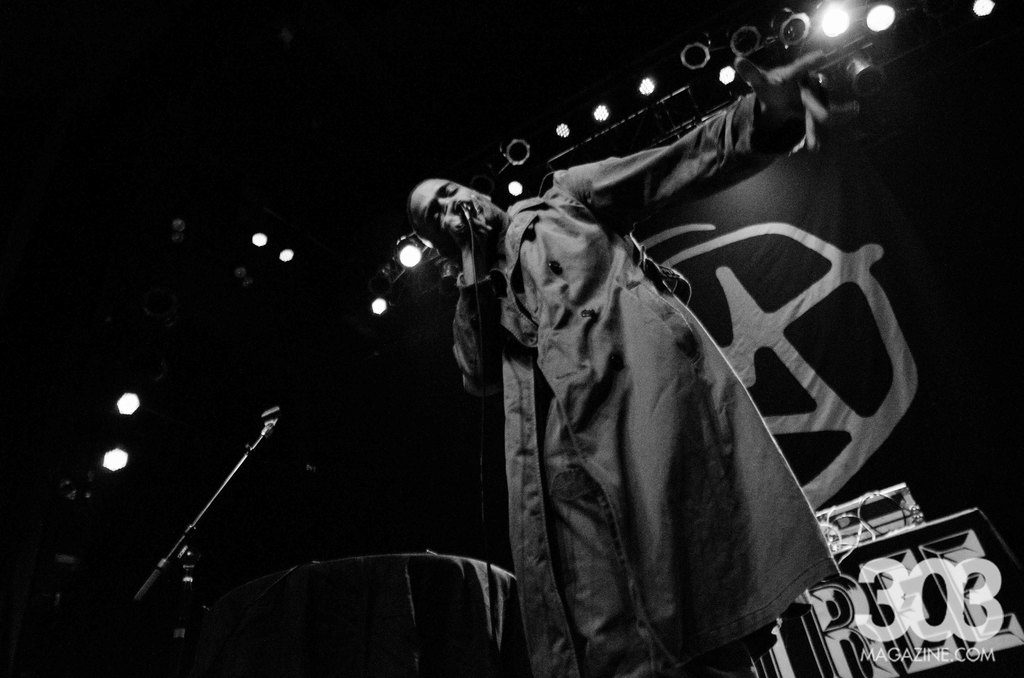 Not long after Busdriver retired for the night, the main affair came out to jazz the sea of hands up and down again. Doomtree entered the scene the only way they know how, high-speed and with a rowdy hullabaloo. The audience cheered and roared as the group interchanged their places on stage, belting tracks old and new. They started the night out with the 2011 favorite “No Way,” and then dove right into “Gray Duck” fresh off of the new album.

The collective showcased all of the individual talents of each affiliate, particularly a tremendous rendition of POS’s “Drumroll (We’re all Thirsty)” in which he held the spotlight with flawlessly executed rhymes. POS, a founding member of Doomtree and also signed to Rhymesayers Entertainment, demonstrates such an unmatchable talent through his raps that it is easy to forget that he additionally devotes his time to punk band Building Better Bombs as well as indie soft-rock band Gayngs (also featuring Bon Iver) and several other eclectic projects. 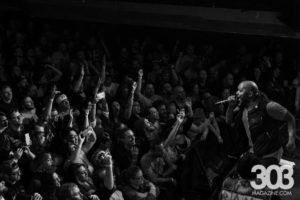 POS was not the only element of the set to stand out. Cecil Otter did a killer “Rebel Yellow,” and SIMS grooved on his “L’Audace.” Dessa, a goddess and the only female of the seven, held some mind-blowing notes, notably during the song “Call off your Ghost” towards the middle of the set. Mike Mictlan also took the theater by storm during his solo performance of “CLAPP’D,” which delves into societal issues like racism, drug use, and police brutality. The track was accompanied with background gun shots and Mictlan hollering out a moving command of “Hands up.. Don’t shoot!”

During a break from the energizing tunes, Dessa took a chance to enlighten the patrons of the ins and outs of Doomtree’s functionality. She offered simple but incredibly interesting anecdotes, such as touching on Lazerbeak ‘s children and the fact that Stef’s (or POS’s) mother is the hand behind shipments of band merchandise. 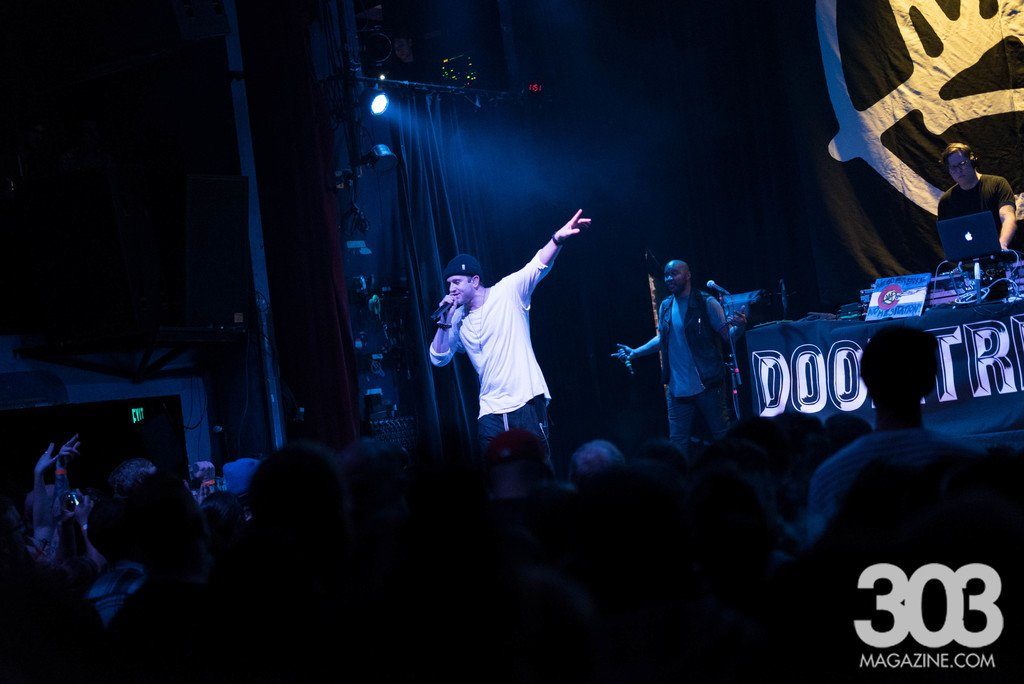 The remainder of the show left no Nike unscuffed, with virtually the entire room jumping right down to the finish. The joint musicians continued past midnight with tracks like “F*ck your stuff,” “Get Down,” and many more. After taking a quick break, they rejoined their fans for a pounding encore of “Low Light Low Life” and of course, “Bangarang.” 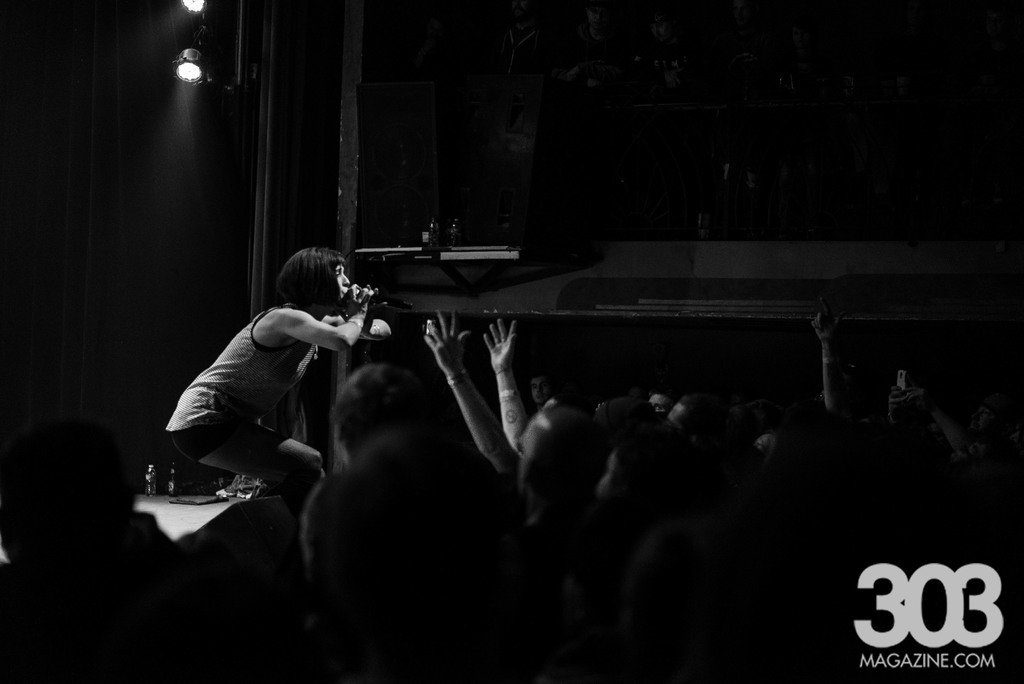 The partied out fanatics then threw back the rest of their whiskey drinks, squished through the doors out into the Colorado cold, rejoicing as the sweat chilled their warm skin instantly. Conversations could be overheard of a genuine appreciation of this rare and excellent opportunity to experience the Midwestern treasure.