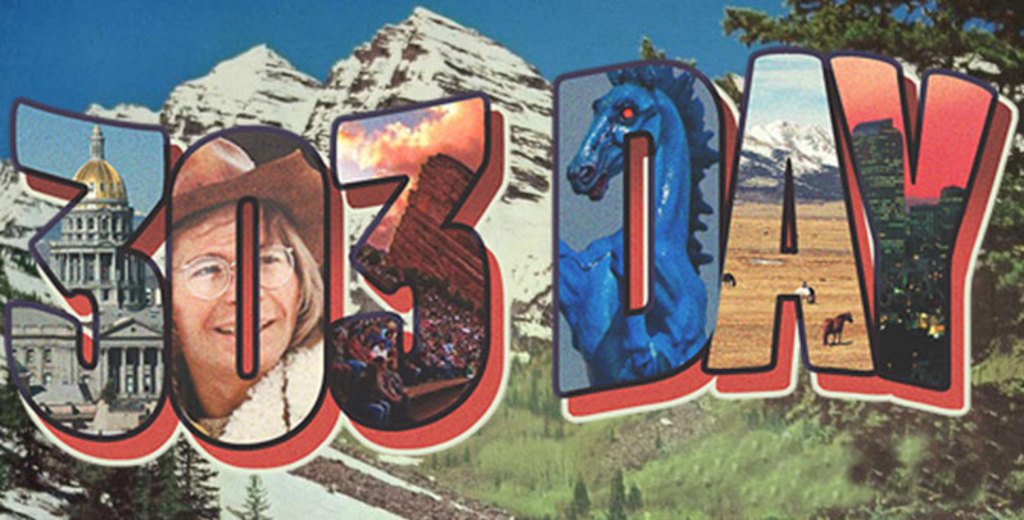 Today is officially 303 Day! It’s a whole day to celebrate this great city of Denver (and the rest of Colorado), so show your pride and get involved with this amazing celebration. This year, 303 Magazine is fortunate enough to be joining the awesome sponsors for 303 Day, including Channel 93.3 and Illegal Pete’s.

So wear your most festive ColoRADo gear and head to an Illegal Pete’s near you for some food, fun and music. Those wearing their Colorado gear will receive FREE chips and queso when they purchase a lunch, dinner or late-night entree. Let’s meet the bands of 303 Day. Read on for more about each of the acts performing FREE at Illegal Pete’s TODAY.

Formerly of The Lumineers, Maxwell Hughes departed the band to explore his own music-making and had made a name for himself as a solo act even before then. The acoustic songster plays instrumental guitar and has even placed third in the International Fingerstyle Competition (yes, that’s a real thing). Hughes is a talented singer and songwriter, even covering untouchable songs like Nirvana’s “Smells like Teen Spirit,” below. Check him out at the Illegal Pete’s Hill with the hilarious, crazy-haired, handlebar-mustached comedian Hippieman. Don’t miss out on these guys!

Boulder band Longest Day of the Year has a unique Americana sound, derived as much from their Colorado roots as from their musical instruments. The band has a grit to them, which undoubtedly sets their sound apart from the gaggles of other alt-country bands in the region. The gruff vocals are taken to another level with the down-home, yet rebellious lyrics. Fans can expect solid guitar riffs with a bluesier kick. Catch them with comedian Alan Bromwell at the Illegal Pete’s on Pearl.

The wild-haired crooner of You Me and Apollo is a force. His voice is one of those unexpected melodious eargasms that sounds like it should be coming out of an earth angel or some sort of centaur. It hits you like a ton of bricks and begs to be heard. While You, Me and Apollo may no longer be an active band, we’re just excited Cowles is continuing to make music on his own. Don’t miss his solo show at the Illegal Pete’s in LoDo alongside funny-woman Kristin Rand.

AMZY is an alt-rock group taking the genre–and the area–by storm. And actually, to describe them as simply alternative rockers would do these guys a serious injustice. The band blends synth pop with rock and other elements to make something creatively passionate, experimental and exciting. They released their first EP We Don’t Walk, We Dance in January of this year. Even if you don’t come for the music, these dapper, suit-clad fellas will surely give you something nice to look at. They will play at the Illegal Pete’s alongside Flithy T, the brainchild of six Denver natives who passionately fuse rock, rap, soul and more into something unique and edgy. Check them out!

Denver indie-rockers the Epilogues have made a big name for themselves in Colorado and beyond. The band successfully treads between experimental and mainstream sounds, never quite diving for one or the other and consistently blurring the lines between alt rock and indie rock, setting their sound apart from the rest. Post Paradise is an indie-rock band who dives deeply into melodies and lyrical prowess along multiple genres of music. They will both be performing at the Illegal Pete’s in Fort Collins.

Chris Dismuke is a singer-songwriter with a deep, gritty voice and a penchant for pop covers. Dismuke sits in front of his computer, acoustic guitar in hand and belts it out with no shame, covering anything from The Beatles and Prince to Katy Perry. Though his covers are predominantly pop-driven, his voice has an unmistakeable twang to it, that adds to its uniqueness. Catch him with comedian Adam Cayton-Holland at the Illegal Pete’s on South Broadway.

Bassist Nathan Maxwell (originally of Flogging Molly) started The Original Bunny Gang as a side project to explore his other musical interests. His songs were piling up and Maxwell felt it best he share his personal story through musical endeavors apart from Flogging Molly. What came about was a completely different genre for Maxwell and The Original Bunny Gang, who took on more reggae, synth-driven and acoustic sound. The music has a softer edge, preparing the band for a wider audience of people than the punk-rock fans of Flogging Molly. Check them out at Illegal Pete’s DTC location.