Life In Color is the world’s largest Paint Party. It is Global Dance Fest meets Holi with lots of people, awesome music, and most importantly– paint canons. This Saturday Feb. 7th the epic dance party will be held at the Denver Mart. Life In Color boasts a lineup featuring Basscrooks, Big Makk, Brillz, and DVBBS. We are thrilled to see locals BassCrooks playing at Life In Color for the second year in a row. This is an event you cannot miss.

Bass reverberates and splashes against the additive-free, water soluble paint spraying onto the crowd. The madness counts down like a clock and hoses, canons sit at the front of the stage. By the end of the night, there will be veritable inches of paint on the ground. Wear white, wear shoes you aren’t super attached to, and buy tickets here. 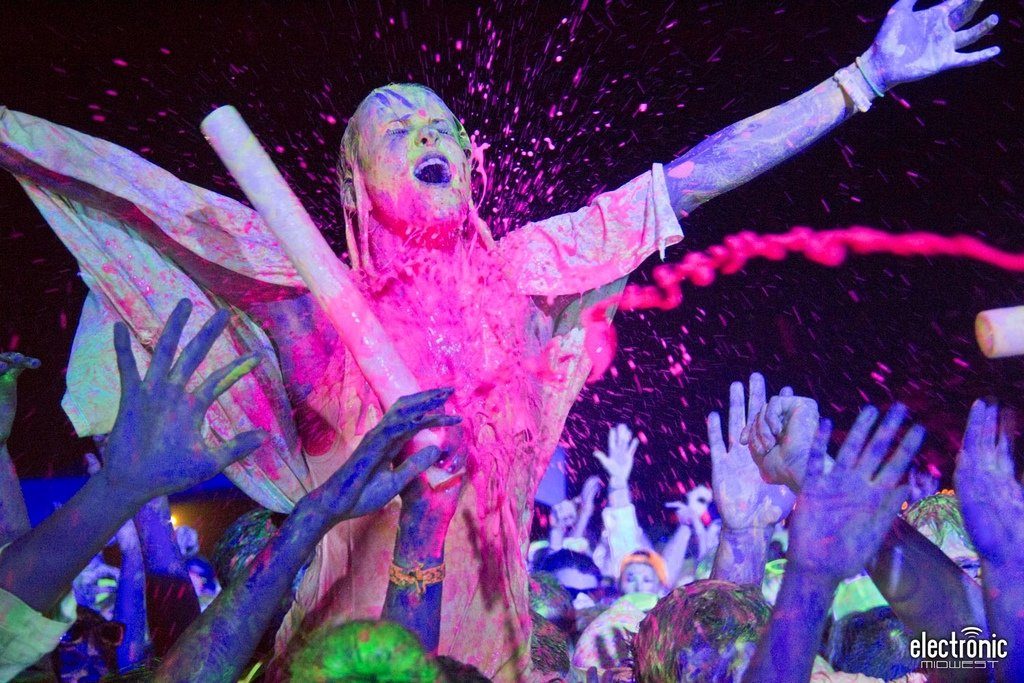 303 Magazine was lucky enough to sit down with the two members of BassCrooks, Elliot Oveson & Akbar Mohabbat. The duo decided to base their band out of Denver, formed in 2012, and have spent the part of their lives obsessed with music. DJing across the country, BassCrooks opened for Zed’s Dead this past year at Red Rocks, plus were a part of the roster of Global Dance Fest on the rocks.

Now, Life In Color will explode in Denver again this weekend! I don’t know if I’m mentally prepared for the paint explosion that will be this performance. To help brace me, I chatted with Elliot & Akbar about music, color, and the hustle. 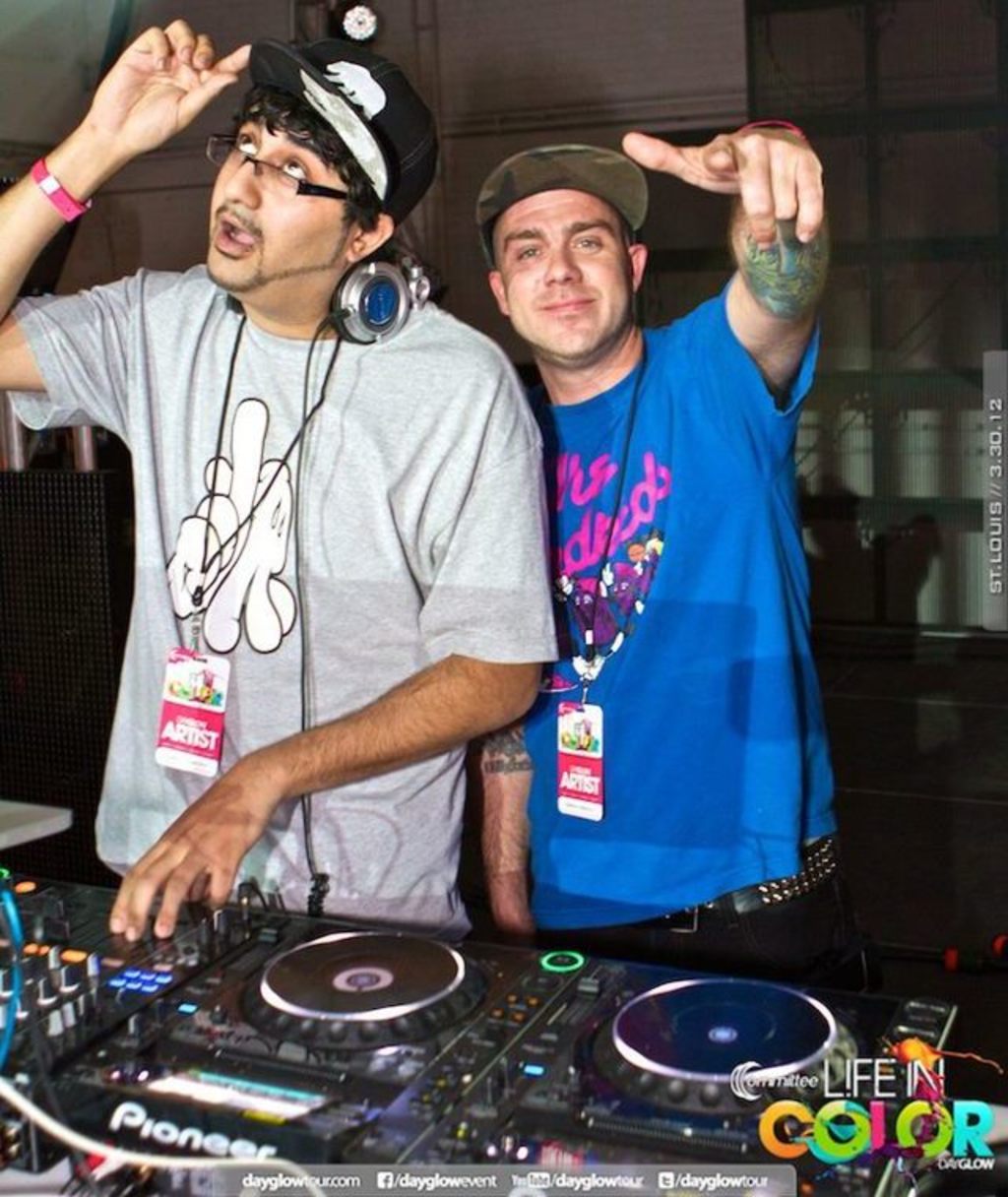 Basscrooks Akbar and Elliot, photo courtesy of Life In Color.

303 Magazine: Thanks so much for sitting down with us. For those who don’t know, what is Life In Color?

Elliot Oveson: It is a huge show, where people come to get lit. Literally, covered in paint. They have these mini canons set up along the front of the stage operated by this thing you lift up, with a serious red button. Like you’re lighting a bomb off. Those just explode with paint. Then they have 2 off these big fire hoses. They’re really good at keeping it away from the artists. All the DJ gear is theirs, all the stage set up. If they get paint all over it, they’re gonna have to just deal. If you’re in the front 20 rows, you’re gonna be absolutely drenched in paint. It’s unreal. The show is really unique, it’s a destination. Last year Carnage headlined.

Tell me about that experience?

Elliot: People go there knowing and wanting to just get covered in paint and wild out. Last year was like 20 below, and there was a line out the door. About 7,000 people. It was amazing. This weekend is going to be sick. If it hasn’t sold out already, it’s close.

I just want to have fun and DJ and try to make good music. That’s all I want to do. We are out here grinding, it’s hard work. Nothing is handed to you.

What does Basscrooks means? Are you “stealing bass”? 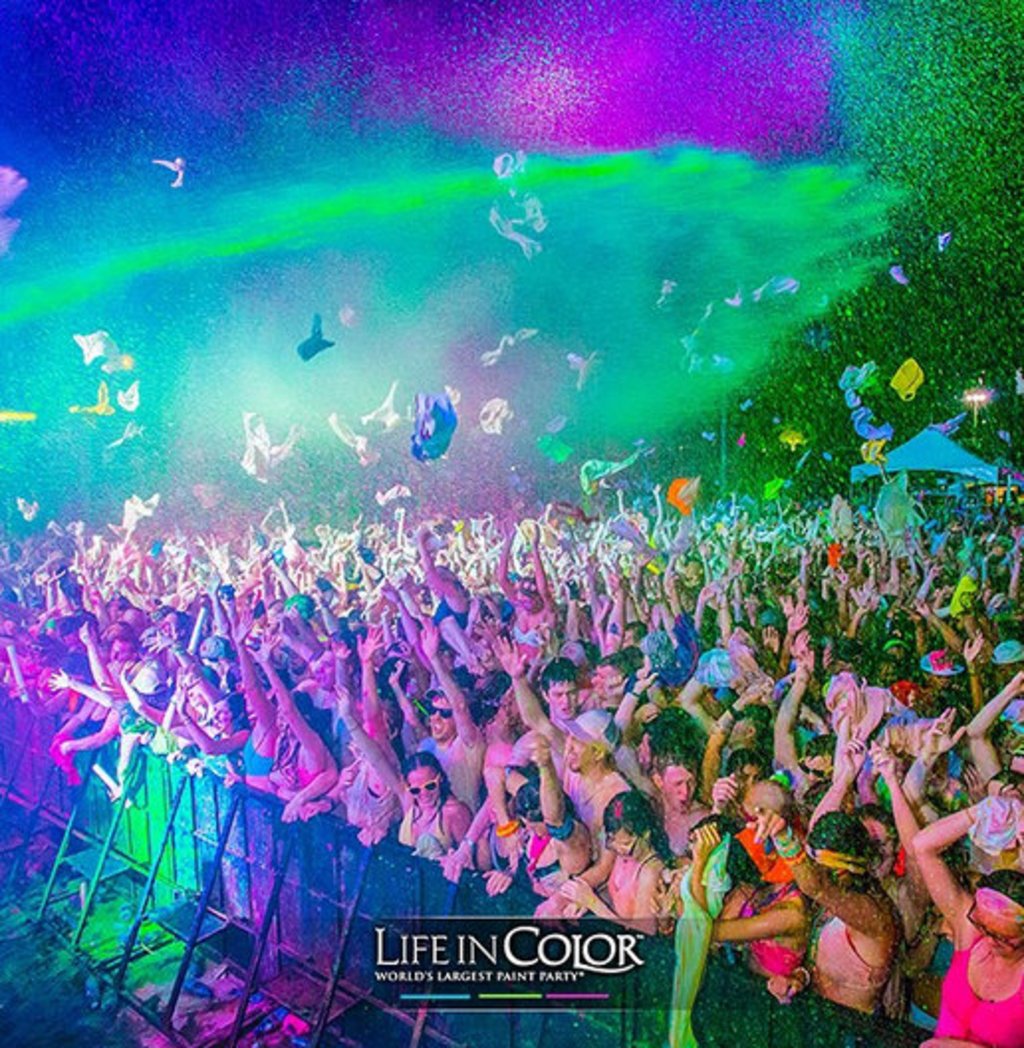 Akbar Mohabbat: Well to be 100 percent honest I don’t know how Elliot came up with the name.
Elliot: Neither do I. It’s just random. But I like how it sounds, it was more about the way it rolls off the toungue. It’s dirty.
Akbar: When we started this it was a Dj crew that made mixtapes mashups and played bottle service clubs. I met Elliot when he came and opened for LMFAO in St. Louis, I liked his style and we kept in contact and when we both happened to live in the same city we started watering this seed. We had zero intentions on establishing this as a brand or had any idea that we would be playing shows like Life In Color or play Red Rocks 3 times last season. Obviously we didn’t check the artist Rolodex of “Bass” something names.

I understand BassCrooks is made up of DJ Empir3 (Akbar) and DJ Wushu (Elliot). Tell me about your DJ history or origin?

Akbar: Dj Empir3 is what I used to go by when I played open format clubs, prior to Dj Empir3 I was “Dj Parents basement”. I’ve had turntables since I was 16, I was a heavily devoted warehouse raver. But I became Dj Empir3 around 2005. I was walking through downtown St. Louis and out of no where a club owner walked out of his club and said, “You’re Akbar right?” I was like, “Yeah,” he then said that he has heard me DJ and his DJ was about to get fired and he asked if I thought I could handle the job. Top 40 wasn’t really my scene, but I was into clubs. Empir3 is my way of saying when I’m on the decks I’m the ruler, if you’re on the dance floor then you are in my rule. I control this vibe it is MY Empir3.

What kind of music did you listen to as a kid, and who has inspired your music?
Akbar: Man its really crazy because I grew up listening to EVERYTHING i mean from the beach boys to project pat to Michael Jackson. But what influences our work today with BassCrooks came from my teens and early 20s. I was listening to rap and jungle and drum and bass. Artists Like ak-1200, Danny the Wild Child, Aphrodite, I-Cue, the Prodigy, Three Six Mafia, Project Pat, Korn, Deftones. I grew up in St. Louis so southern rap was huge mostly anything that came from Memphis, Nashville, Atlanta made its way through my CD player. Yes, CD player. 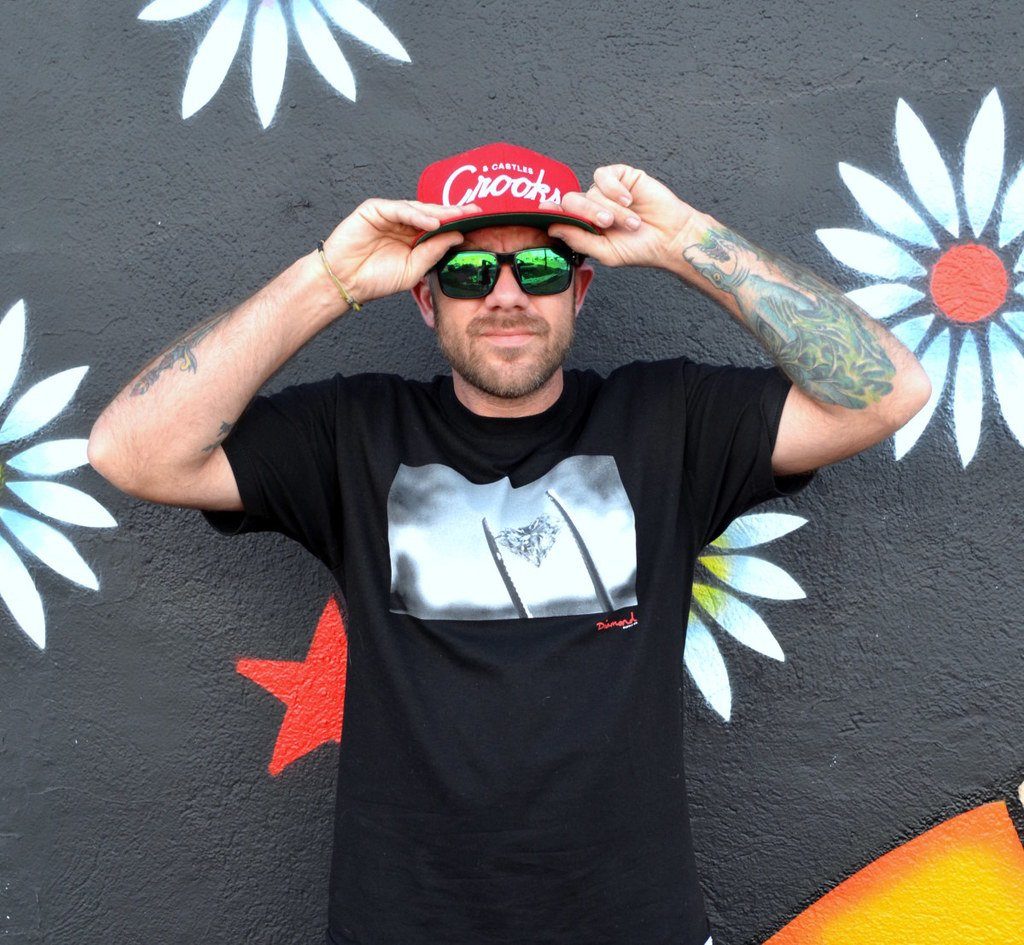 What advice do you have for young kids aspiring to get into the music scene?
Elliot: Not to give up and just to do what makes you happy. Be true to yourself and if you want to make music, make music you like and don’t necessarily try to make a “hit”. Do what makes you happy and practice a lot. Because the art of DJing is fading. We still use turntables, we scratch all the time, we grew up battling with records. We have that background from a time when it was hard to DJ. I’m not talking shit on any new DJ technology, honestly, I embrace all that stuff. Hell, I think anything having to do with DJing is cool. But that being said– the new software and gear that is coming out, it makes it easier. Stuff is easier, faster, more accessible. It’s the musicicans who really care about it and stick to it and are at home practicing constantly, it really does show. The hard work shows, and the practice shows.
What was it like getting to play at Red Rocks 3 times this past year?
Elliot: Surreal.
Akbar: I have a massive man crush on Zeds Dead. When we were asked to play with them my knees about gave out. Zach and Dillon are pound for pound my favorite artists. I mean they are coming through with some of the most well written tracks.  I think every single set we play usually has 1 Zeds Dead track.
Did you sign the wall?
Akbar: Yes, yes we signed the wall. We actually have 2 or 3 BassCrooks was here in the Hall of fame. We only sign if we play main stage at a show. When we played Global Dance top stage we told ourselves we wouldn’t sign until we played min stage so we played with Krewella earlier that summer and you bet we signed that hallway.
Elliot: It was surreal. Signing our name on the staircase wall. What a legendary place too, with such a cool greenroom and just feeling throughout. It was huge, for sure. 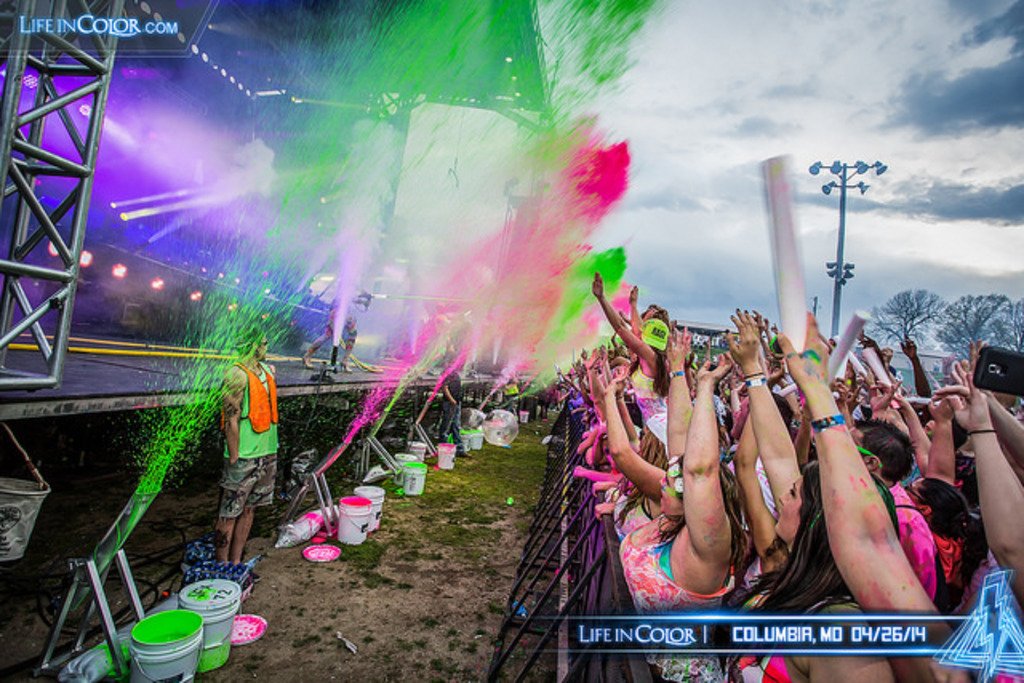 Do you love the Mile High City, what made you want to start Basscrooks here?
Akbar: DO I LOVE DENVER!???! OF COURSE! It’s one of my favorite cities in America. I have 303 LOVE for life.. My girlfriend and family are in St. Louis so I go back and visit when I can, which happens to be like twice a month.  The starting music thing doesn’t matter where you are, it’s a passion and drive you have inside yourself. It has nothing to do with what city I am in. I also don’t consider this my career, I consider living life my career. Music happens to be what I am most recognized for at this point I think. I just needed a change of scenery and there is no better place to be than Denver for me. We’ve made great friends with Colorado artists such as TwoFresh, Paper Diamond, Big Gigantic, and more that have been very supportive. That is what is keeping me here. I feel the music scene is full of genuine support, and not bitter haters.
Akbar’s Questions for 303 Magazine:
How excited do you get when McDonalds brings back the McRib? McStoked.
Indica or Sativa? Does a girl really have to choose?
Tupac or Biggie? Biggie gets me.
How awful was Katy Perry’s fire costume during the super bowl? A hot cheetos mess.
Cats or Dogs? Dogs because cats are mean.

See BassCrooks perform at Life In Color 2/7, and buy tickets before they’re gone! Be sure to follow 303 Magazine on Instagram to see photos from Denver’s Life In Color show this Saturday night! Keep up with all the best in Nightlife here! 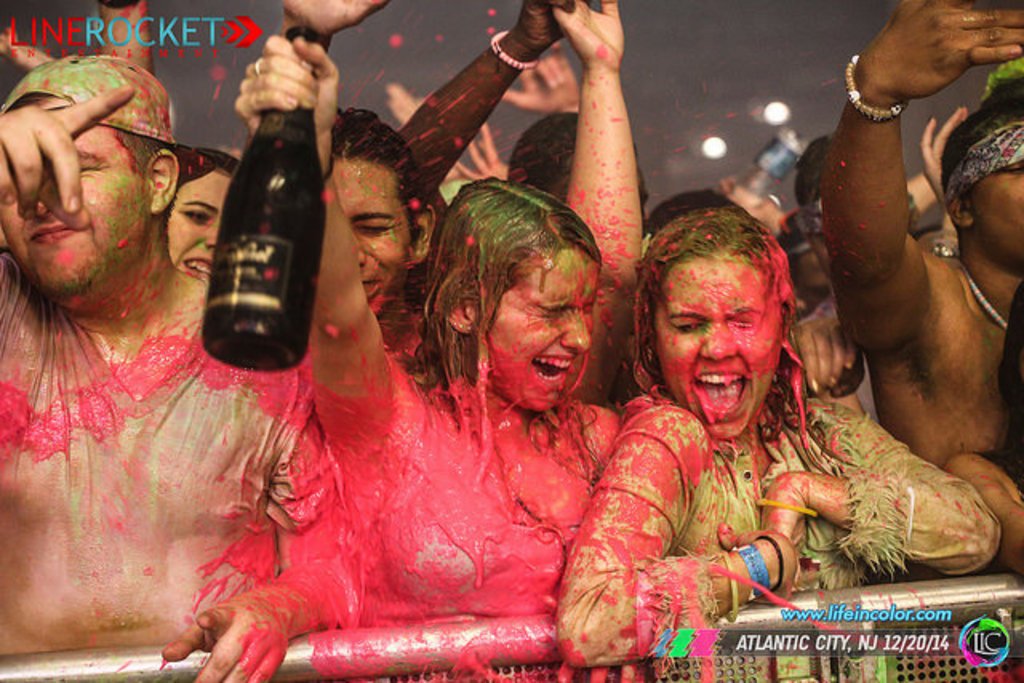