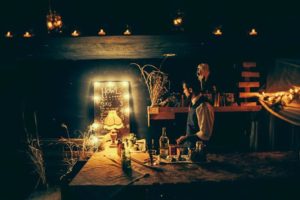 Yeah, we’ve heard it all before. New Year’s Eve is amateur night. There are the cringe worthy, sloshed and sequined masses of LoDo and the neon furry rave babies of Decadence. And, of course, every jam band from String Cheese Incident to Yonder Mountain String Band to Sound Tribe plays a three or four day psychedelic marathon party, often beginning on December 29th and ending January 2 with a blur or confetti, tie dye and hallucinogens in between. We’ve all been there, done that.

And then there was HOWL.

Syntax Physic Opera hosted this year’s HOWL party, which boasted the dark theme of the “Death of the West.” Stepping through the threshold of the bar, which is entirely unassuming on South Broadway, nestled amongst a T-Mobile store and a few fast food restaurants, you may as well have time traveled to a sultry speakeasy during the turn of the century.

First, there was supper (“For a full head and heart, not a bloated gut”) and honkey tonk music to warm the bones. Then a menagerie of rotating bands and performers kept us entertained, but not overwhelmed. The old fashioned “medicine show” style of bands and dancers charmed us from the modest stage in the main room, which was adjacent to the bar area (the rooms were divided by a glass case full of artsy renditions of ancient revolvers), but it was the basement that was the true gem. 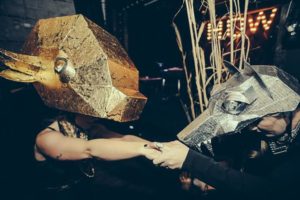 “DANCE OUT THE DEMONS OF YOUR PAST.

REKINDLE YOUR HEART WITH LIVE MUSIC.

REPLENISH YOUR GUT WITH DELECTABLE FARE

The otherwise dank basement was transformed into an intimate den with a make-shift wooden cash bar, plenty of tables and chairs for the dapper crowd to sit and sip, an eery red-lit confessional complete with animal bones and candles where one could repent for their sins of the past year, and a tarot card reader tucked away in the corner. The decor of pine branches, cones, and dried wheat in empty whiskey bottles was rustic, to say the least. Walls were shamelessly constructed of pallets. The lights were dim, the air was musty and pungent. And the sharp dressed bar tenders served up whiskey cocktails and made nice with the party goers. 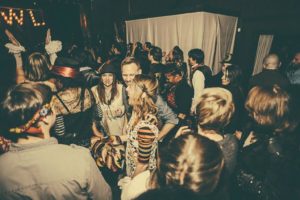 There were pin stripes, suspenders, and fur shrugs galore. Easily the best dressed crowd that I’ve encountered in a long time. Spats, chaps, bollo neckties. Leather and lace and some steampunk accoutrements, too. The HOWL community was one of warmth and acceptance. People were polite and smiley… perhaps it was the Snake Oil in the drinks or just the general ambience of the party, but whatever attributed to the mood of HOWL was something deep, sweet and magical. And for a sold out party, there was more than enough room to twirl about and minimal lines (if any) at the bar or in the bathroom. Over all vibe was mellow, yet enchanting. Quite perfect, really.

And then there was the music. HOWL featured a few local Denver bands with soul. Hangman’s Hymnal played a set of lively foot stomping, quick picking, whiskey slurping songs. And then the Land Lines crooned their haunting and beautiful melodies to ring in the New Year. The countdown led to a shower of silver confetti and smooching, followed by more dancing and socializing. The ladies of Tigress Dance choreographed some masked moves throughout the crowd in their metallic headpieces. We ended the night with a slow dance to the late night DJ’s Crimson and Clover before calling it, but the party was still buzzing with swaying lovers and funky tunes as we took off. 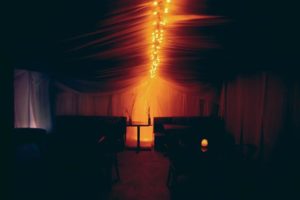 HOWL has been providing an alternative New Year experience since 2009, “creating an elixir sure to cure your aliments and renew your health for the road ahead.” HOWL’s main goal is to “transport guests away from the mundane and into the unexpected” and is currently looking to expand. Incase you missed the New Year’s Eve soiree, you may seek redemption at the potential summer HOWL party, with a new theme and a new location.

All Photos by Christopher Kuehl