Artwork can take the viewing audience on a captivating journey. However, it is when this journey also encapsulates the dynamic story of life, the quest to explore and creatively collaborate with other artists that one can fully appreciate a true artist’s trek. 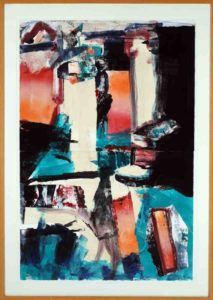 Saul White and Steve Wilson weren’t just artists, but they were artists that truly explored the meaning of being an artist. They were active in the mind awakening times as creative souls in the true sense of being “Bohemian artists in the Modern art world,” states Edwin Ward.

“Both believed in the permanent viability of expressive abstraction, although Wilson’s work sometimes tended towards iconographic representation,” continues both Edwin and Marcia Ward, close friends and creative sounding boards of both artists.

Edwin and Marcia Ward, also very impressive artists in their own right have taken on the request to showcase the remaining works of both White and Wilson by Michelle White. Michelle was the wife of Saul White for a number of years and then was the wife and partner of Steve Wilson for the last dozen of years of Steve’s life.

White and Wilson were more than just Beatniks of the times, they were “prolific and both of whom sold most of their art as it was created.”

“Saul White studied art after the Korean War at the Otis Art Institute and visited NYC in the late 50’s and was befriended by William de Kooning and Franz Kline,” states the Wards and continue “Saul took up “action painting” and would say things like “It’s not action painting if you can’t finish it in the time it takes a Chet Baker LP to play.”

“Steve Wilson was a rare book dealer who studied the art books that came his way. He took up art as a young man because he was possessed by a creative that had Steve making art practically every day of his life,” states the Wards. 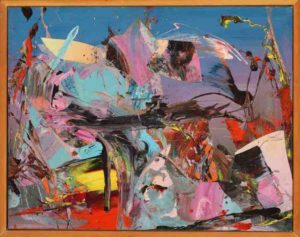 Saul White painted with oils and acrylics and also made mono-prints out of printer’s ink. Steve Wilson was both a painter, utilizing oils and acrylic paints, as well as a collage artist.

More than being artists they were awakening the creative soul of America at a time when America was truly growing, changing and pushing the limits. 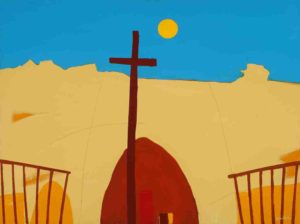 I had the pleasure of meeting Steve Wilson in 2004 when I was writing for Colorado Modern Art Magazine. He was such a welcoming soul. He allowed you to explore and ultimately embrace his knowledge. Steve’s ability to take you into his ever expressive artistic and literary word, in the sense of his vast wisdom of both making him a true Bohemian. My meeting with Wilson not only opened my eyes to a time in our American history known as the Beatnik Era, but he also influenced me artistically, which I didn’t recognize until years later at his memorial in 2013 when I was gazing upon his collages, as I too at a point many years after our first meeting had began expressive collage artwork. I only wish I could have had the pleasure of meeting Saul White as well. 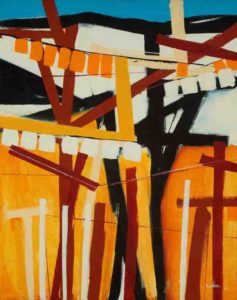 Art, the process and exploration of it was very important to both White and Wilson. “Steve made art everyday of his life,” smiles the Ward’s and continued “Saul actually had “secret” processes, such as using hot oil for paintings and obscure/arcane printing techniques to create his mono-prints.”

They both had the following philosophies: Work, never stop; Family, above all else; Life, don’t do it if it don’t make you happy. Their inspiration came from the Beat Era of Southern California, 1950s, 60s and 70s. Wilson was also in awe of the artistic works of Charlie Chaplin and Motherwell. While for White, William de Kooning, Wallace Berman, Edward Kleinholtz and John Altoon struck an awe chord for him. Tony Scibella a poet and an artist was a great influence on Wilson.

The remaining works of both artists, Steve Wilson and Saul White are a Must See and I don’t say this lightly. They are works from a generation of artists and a scene that just doesn’t exist in today’s artistic world. Edwin and Marcia are wonderful hosts that are able to tell intimate stories of each of their friends that you can feel you are there, back in time. And, if you listen closely to the stories and gaze silently into each artists work, you can also feel their presence, it is truly magical. 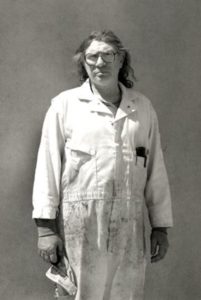 Edwin and Marcia Ward own and operate The IMAGEMAKER located at 5475 Peoria Street, Suite 4-112, Denver CO 80239 where the remaining works are currently on display and also for sale as an entire collection or individually. 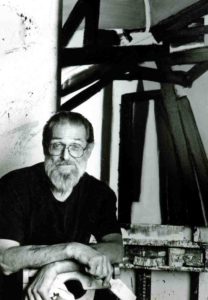 Steve Wilson in the Studio 2004

Please contact the Ward’s at 303.322.9324 or [email protected] to schedule a personal tour of the collection.

Visit www.TheImageMaker.qwestoffice.net for more information about Edwin and Marcia Ward. 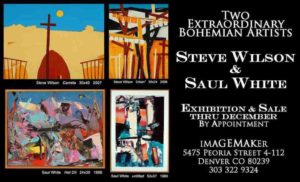 Exhibition & Sale Extended Thru February Due to Popular Demand – ImageMaker