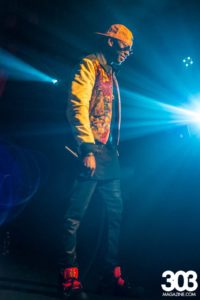 The walls at Cervantes Masterpiece Ballroom were shaking and thumping with bass on Saturday night as Atlanta’s 2 Chainz took the stage. There was some statistic that said 2 Chainz had almost a dozen Billboard hits last year alone and that certainly ran true through his set. The intimate setting gave lots of opportunity for fans to scream the words to all of his songs with vigor and enthusiasm. For his part, Mr. Two Necklaces was tall, rhythmic and full of stamina.

The ballroom was wall to wall packed with partygoers who were ready to delve into 2 Chainz’s catalogue. As he rocked out to “Spend It,” “Feds Watching” and other hits, there wasn’t much to do except watch in awe. While he smoked all the way through his set, there wasn’t one moment that he slipped up on verses of charisma. He re-introduced himself with the Playa’s Circle anthem “Duffle Bag Boy” that had hands in the air the entire time and reminded us why he’s one of the hottest artists out.

Sometimes it’s hard to explain to people the appeal of a rapper like 2 Chainz. Outside of the fact that he’s got hits on hits, the guy knows how to rock an audience. He stalked the stage from one end to the other, giving shout-outs to the fans and sharing anecdotes that described the moments before he “made it big.” “Crack,” “Riot” and “Birthday Song” proved to be major hits as at one point, even 2 Chainz stepped back in surprise at how loud the crowd is. We’re used to seeing the superstar in major arena shows so the Cervantes audience was brimming with energy that the rapper soaked right up. (More photos care of Delmy Gooch here) 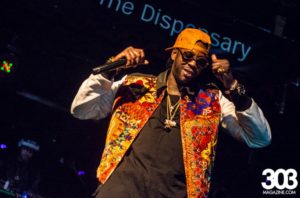 “I Luv Dem Strippers” was the track that had many of the ladies in the audience shaking what they’re mama’s gave them, while “I’m Different” showed who the fly guys were in the crowd. There was lots of collar popping, hand waving and cheering from the moment he stepped on stage until the end of the night. 2 Chainz disappeared into a cloud of smoke after rocking a little over an hour set.

He was well-rehearsed, creative and confident in the songs he chose to play. For the record the Drake-assisted “No Lie” remains one of the strongest bangers in the club or otherwise. It was impressive, perfectly timed and proof positive that dynamism on stage is the key to success. Truuuuue.