Fork It: Izakaya Drinking and Dining at TOKIO

Pros: Excellent list of Japanese whiskys, sakes, and other spirits in a sleek, yet cozy setting. Anything from the Japanese binchotan charcoal grill (the first of its kind in Denver) is highly recommended, as are all of the small plates.

Cons: Parking in this neighborhood can be a pain, but luckily there is a lot behind the restaurant. That being said, you still might consider taking an Uber if it’s a Saturday night. Also, the ramen might not be what you’re used to.

Perhaps you’re the type of person that considers yourself to be an expert on all things Denver. If you were born here, or you’ve lived here for a while,you may feel as if you’ve explored just about every nook and cranny of the city. One area you might not have explored yet, however, is the Prospect District, a former industrial area sandwiched between Coors Field, Union Station and Park Avenue West. The Prospect Neighborhood has been undergoing a facelift, which will eventually yield around 2,000 residential units. The area is already home to a few restaurants and retailers, including a liquor store, a Santiago’s outpost, and TOKIO. TOKIO is the newest endeavor from former owner and head chef of Japon and Japango, Miki Hashimoto.

TOKIO is housed in a former bag factory, though walking into the restaurant today, you would never guess it. The goal of the restaurant, to “transport diners to a small house in Japan,” is certainly met in terms of design and aesthetics. The restaurant feels tiny, though it actually seats 60 with the help of a tucked away loft area (also home to a private sake bar). The space was actually designed by Kanji Ueki, the man who designed the original Apple Stores. The décor is minimalistic and calming. Thanks to the original wood beam ceilings and Longmont ash tables, it bears no resemblance to the sanitary, blinding environment of an Apple Store. 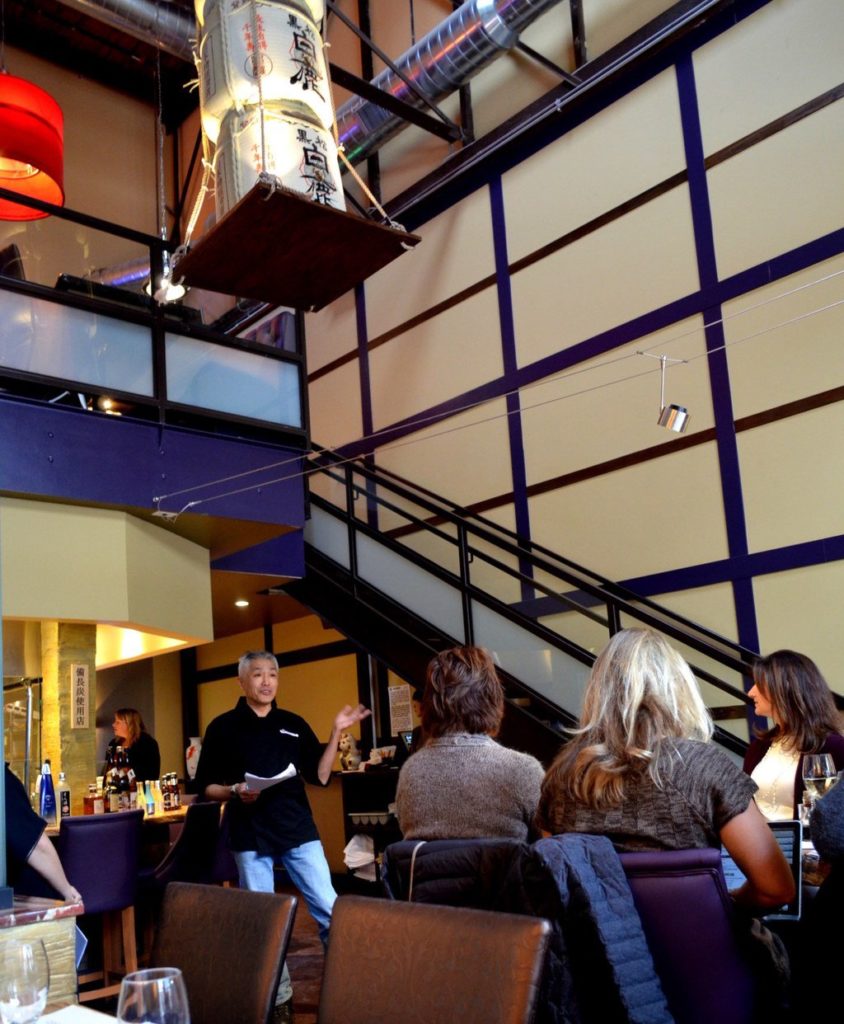 As far as the concept, TOKIO is going for an izakaya-style experience. For the uninitiated, an izakaya is basically a Japanese pub—an establishment focused on serving booze and tapas-like snacks and bites. Chef Hashimoto explained that he finally felt that it was the right time to bring the izakaya experience to Denver. When he opened his first restaurant, Japon, almost 20 years ago, many so-called “Japanese restaurants” weren’t even owned by Japanese people, and the average American considered sushi to be an exotic rarity. Now that sushi restaurants are common fixtures in the Denver landscape, Hashimoto felt that the city was ready for more authentic Japanese fare.Keeping in tune with a genuine izakaya experience, TOKIO is really a solid drinking spot at its best. A fantastic list of sakes, wines, cocktails, and spirits make this spot worth more than just a happy hour stop. Looking to expand your understanding of Japanese drinking culture beyond a sake bomb? The sake flights at TOKIO are a great way to gain a deeper appreciation for the intricacies of the spirit, ranging  from the sweetness of plum sake to the creaminess of unfiltered sake. As for the spirits, if you’ve never had shochu, TOKIO is the place to try it. Schochu is a Japanese distilled beverage described as “weaker than whiskey, stronger than wine.” The smooth flavor is superb, and highly recommended in a martini. If you prefer a spirit with a bit more bite, TOKIO offers a fine selection of Japanese whiskys, including Hakushu, Yama Kazy, and Hibiki.

While the booze at TOKIO is one of the main attractions, the food is definitely worth sticking around for. The menu has been crafted around a drinking experience, meaning that the little bites are exactly what you’ll be craving after a few cocktails. One of the most exciting things in TOKIO’s kitchen is the binchotan charcoal grill, a traditional Japanese cooking method involving holm oak charcoal. The yakitori coming off this grill offers a deep smoky flavor, crisp and caramelized exterior, and juicy, tender interior. Traditional small plates, like the gyoza and shu mai, are also delicious. And yes: the restaurant also offers sushi, including two dollar deals on nigiri and sashimi during happy hour.

As far as entrees go, the most substantially filling item on TOKIO’s menu is ramen, a common “fast food” in Japan. Perhaps the perfect dish for a cold Denver night, Chef Hashimoto’s ramen selections offer both authenticity and a few surprises. There’s the standard tonkotsu and miso ramen, but there’s also something on the menu you’ve probably never seen before (at least, I hadn’t)—Ramen Air. Chef Hashimoto’s vegetarian invention, Ramen Air comes in a soybean milk broth, rendered slightly sweet with the addition of pumpkin. While the idea of the dish is innovative, it lacked the umami many expect from ramen, and the soymilk gave it a sweetness that seemed out of place.

That aside, overall TOKIO offers a tucked away gathering spot for adventurous drinks and authentic eats. Do as the Japanese do, and stop here after work for a couple luxurious hours of eating and drinking. You might feel as if you’ve left the Denver city limits altogether, and been transported straight to Tokyo.