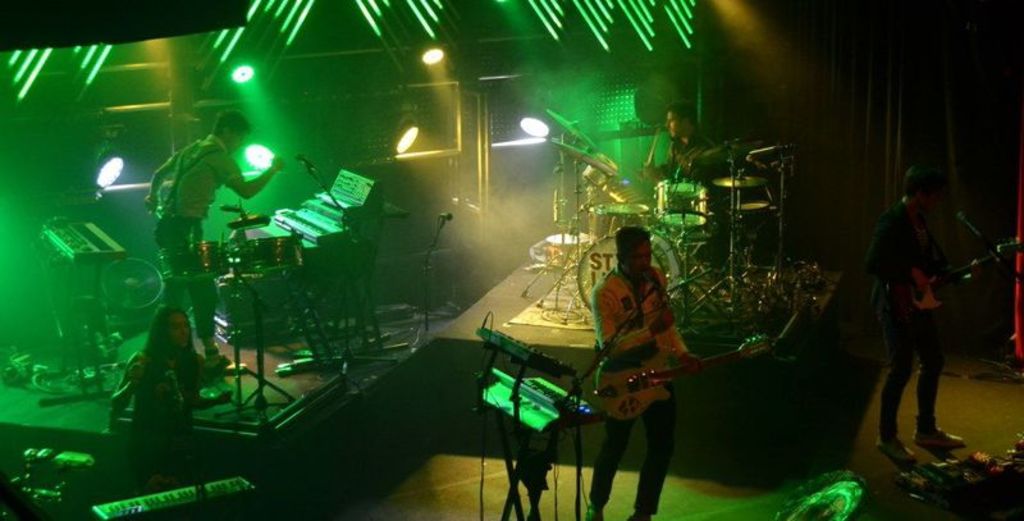 The Gothic received the St. Lucia treatment last Friday, transforming into a venue of another location and decade. St. Lucia performed songs from their 2013 album, When The Night, proving that when the night actually does come, they emerge to construct a musical experience that places a crowd into their world.

With their use of pop-synth and jumpy beats, St. Lucia set the audience in an 80s dance party on Friday night. Started by lead singer and South Africa-native, Jean-Philip Grobler, St. Lucia began in 2010. Drawing inspiration from artists such as Phil Collins, Lionel Richie and Michael Jackson, Grobler strived to create a sound that would please both his love of South African music as well as evoke a sense of a decade, passed. Joining forces with his fellow bandmates, his vision was achieved. The members of St. Lucia include Nick Brown on drums, Patricia Beranek (Grobler’s wife) on keyboard and vocals, Ross Clark on bass and Nicky Paul on synth. The band has toured with company such as Ellie Goulding and Charli XCX, proving that they are the group to watch–and so concert-goers at the Gothic did.

The show began with a voluminous, deep percussion set behind a barely lit set. As synth joined the party, so did the lights, suddenly blasting in rhythm against the audience. The band’s first tune, ‘Cold Case,’ grew increasingly recognizable. Lead singer, Grobler, stood in the very front, adorned in black pants, a white shirt with various small pictures on it, and black and white striped loafers. His multi-skilled talent was demonstrated by his simultaneous use of the guitar and the synth. The sporadic lights and colors shined upon him and the band, celestially enticing the crowd. Beranek showcased her vitality as she danced about from stage right, lending her voice to the song’s delicate harmony. Just as it began, the tune ended with strong percussion.

‘Never Forget’ was up next. During the entire performance, Grobler was particularly animated,  filling each moment with entertainment. He turned in circles as he continued to perform. Fog poured onto the stage from each side above the band as wind blew onto Grobler, allowing for a true 80s music video feel. The lights were in accordance with the music–as the song grew louder, the illumination appropriately changed. While Grobler head banged to the beat, Clark and Paul also danced around.

The energy remained as the third song, ‘Closer Than This’ was announced. The lights appeared according to the synth chords and immediately, dancing ensued. Grobler began to jump while playing, at one point striking a pose in the air. As the entire audience danced along with him, he let out an encouraging, “Come on Denver!” stimulating the crowd even more.

The tropical lights behind St. Lucia created the sense of watching this performance in an island setting. This song transported the audience not only to another decade, but to another world, in which their only care involved grooving.

The tribal feel continued as ‘Wait For Love’ began and soon after, ‘We Got It Wrong.’ Grobler had the audience sing parts of the song, drawing another bout of high-energy from all of the concert-goers. Every inch of the room was flooded with light until the entire stage became a hauntingly-red darkness. Grobler began clapping for the audience, as if he were applauding their constant support. At the end of the song, he gratefully stated, “That was f***ing awesome, guys. Thank you.”

The dancing continued with ‘All Eyes On You,’ at the end of which, an honest Grobler stated, “Excuse me while I dry my ears, because this is really disgusting.” After, he announced a new song, exciting the entire house. The tune was a sensual ballad, exhibiting Grobler’s impressive vocal range. The audience began snapping along with Grobler and the rest of the band. It was a hit.

As the familiar song, ‘Too Close,’ began, it was Brown’s turn to showcase his skills on the drums, killing it with rapid, intense beats. Other percussion effects added more texture to the tune. Grobler was able to simply lend his vocals to the song without using any instruments, adding a sense of intimacy to the performance. A prolonged instrumental bit occurred as the synth added to the intensity, building to an eventual close. 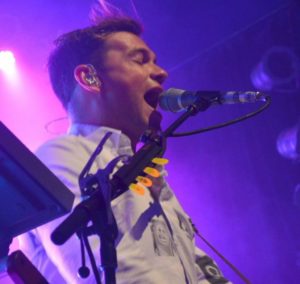 ‘September’ ended the show as Grobler asked, “Are you ready to get this party started tonight?” and continued to add, “Denver, let’s reach for the sun,” using one of the lyrics as his incentive. Fans all about screeched in excitement as the high-energy, dance-song ended.

As the band exited the stage, the crowd demanded an encore–and so they got one. St. Lucia took to the stage, once again, ending their performance with an appropriate, ‘Elevate.’