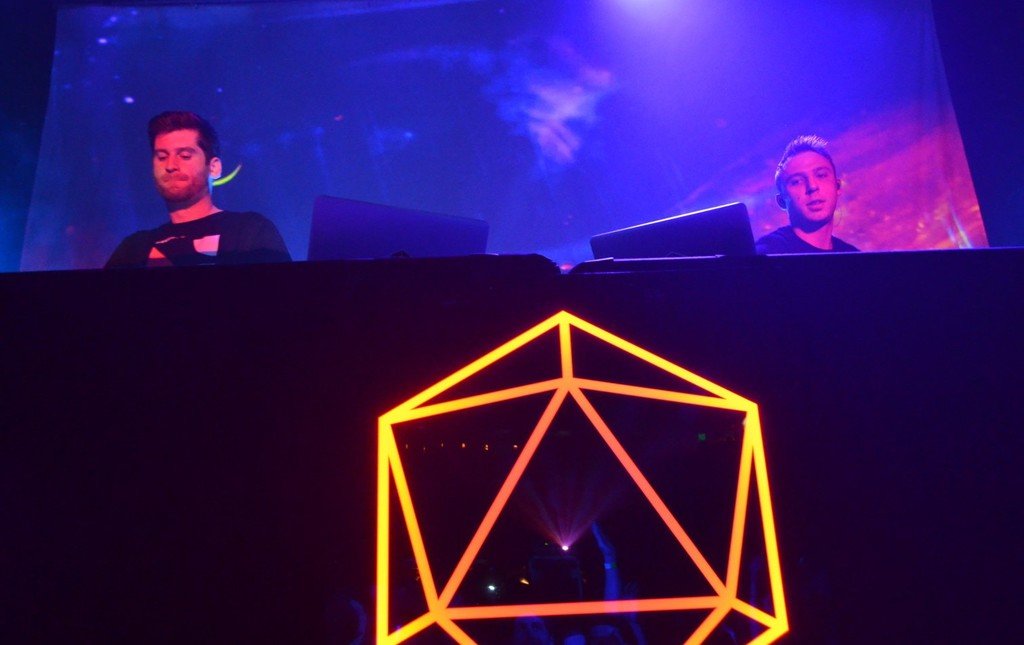 ODESZA played the Ogden last Saturday and proved that their brand of atmospheric, cinematic electronic music is just as adored as big room house or bass-laden dubstep. The duo, hailing from Washington, have a serious knack for creating feel-good tracks that are as welcomed on a Sunday morning drive as they are at a Friday night festival. Their music pushes boundaries and shatters the traditional EDM mold. Rather than sterile and unemotional, ODESZA packs their tracks full of somber basslines, haunting vocals and searing sample layers. ODESZA stepped up their game from the last time I saw them, using a completely refined production system to round out the sounds. They’ve taken an more indie approach to creating music, using samples from lesser-known songs by indie artists.

Rather than sampling hip-hop lyrics or old soul records, the duo gravitates toward ethereal vocals that create something a bit more airy and delicate. And on their newest release, In Return, ODESZA sought out actual vocalists to create those memorable, angelic sounds. Before their Ogden show where they soared through new hits and old favorites, I caught up with Clayton Knight of ODESZA to talk about their unique sound, the new album, tour stories and more. Check it out!

Awesome. I actually interviewed Harrison before you guys opened at Decadence for NYE. Then you played two sold-out nights at Larimer Lounge and your show on Saturday had to be moved from the Gothic to the Ogden to accommodate for the number of people that wanted to go. So how crazy is the success sky-rocket you guys have been through these past two years?

It’s been pretty surreal. It’s really nice to see all the support. Yeah we keep underselling, so I think we need to play some bigger spots.

Are you guys excited?

Yeah we’re pretty pumped. We have a whole new production with us and we get to play some new tracks so we’re excited to see it all come together.

Your new album (In Return) dropped pretty recently and it’s different from your other stuff, but also really, really good. It’s the same vibe, but a lot more vocal collaborations and Eastern sounds, where’d your production influences come for this one?

When we went about writing newer stuff, we wanted to keep it almost more low-key, more atmospheric. We’re big fans of that kind of music. When we were in college and stuff that’s a lot of what we listened to, like a lot more experimental sounds, so we tried to write some more music along those lines.

Yeah, a lot of it has almost a cinematic kind of Bonobo feel to it and I really liked that.

And I think out of everything on it, “It’s Only” seems to be a lot darker than a lot of the stuff you guys have done. But it’s also my favorite track on the album. What drove you to that kind of heavier place?

And how do you pick and distort the samples you use? Are you always trolling Soundcloud, Beatport, Spotify, etc.?

Well yeah totally. But that track (“It’s Only”) actually has no samples in it. The idea is to make things that actually sound like it’s being sampled. There are different ways to distort and saturate and then filter out certain frequencies then adding layers of vinyl hits and things to make it sound like they’re being sampled and kind of recreate that warmth.

And like I said earlier, there are a lot more vocal collaborations on this one, do you guys seek out those voices or do people come to you?

Both. There’s definitely people we sought out and really wanted to work with. But at the time they were kind of out of our reach. No one really knew who we were and we were kind of lower key at the time. But yeah, we also just reach out to people who like to sing. Like Madelyn Grant and even Zyra or people that many people haven’t even really heard of. But they knew a little bit of our music and we reached out to them, seeing if they wanted to write some lyrics or top lines for music we sent them. And we reached out to them through like Facebook, Soundcloud, Twitter, basically most social media.

And that’s pretty cool to have social media and be able to interact with your fans and also have people send things like that to you and be able to seek people out after you’ve heard their music. It’s kind of changed the landscape a lot.

Oh yeah, definitely. It helps us a lot.

So you guys are on tour, have been on tour for a while. What’s your favorite pastime when you’re not on stage or making music?

Oh man, well we watch a lot of TV show. Half the crew has been really bingeing on Boardwalk Empire. And also I’m a big fan of Game of Thrones, so I’ll throw a few episodes on and just chill out really.

I bet. Just time to decompress.

Yeah exactly, but we’re making music so much on tour, that we rarely have the time for that. This is our first real day off in four and a half weeks.

And you’re stuck talking to a bunch of nosey journalists.

Haha, it’s not that bad, believe me!

Do you guys have any crazy tour stories or anything?

Not recently. There’s an older one you may have heard about that went down, you may have heard. We played in Montana, in this kind of basement set-up in Missoula, in this dingy club that I think was like 18 and up. Maybe all ages. O we start playing and Harrison looks over at me and he’s trying to give me a signal that he can’t really like hear anything. We have monitors set up and I look over and there’s this young girl kind of like bent over his monitor. She looks like she’s kind of dead just bent over it. And, uh, yeah so Harrison can’t really hear anything still and he looks over and he finally sees this guy who’s standing behind her, basically giving it to her from behind.

Yeah, no kidding. That went on for probably like 10-15 minutes. And that was that.

I think she kept staring at him the whole time.

And he’s trying to look literally anywhere else.

That’s an awkward one, yeah.

Montana too. You would never think.

Yeah, they go crazy over there.

Well, one of the questions I had was what was your most memorable crowd, but maybe it’s safe to assume that was it.

Haha, uh yeah definitely one of them. So far this tour, we’ve played a couple shows in Canada that were just outrageously fun. Like the crowds are really responsive and then we played Minneapolis right before here and we played at a pretty legendary venue because we got moved up again.

Have you met anyone thus far where you’ve been super starstruck?

Yeah, I mean we’re on the road with some people that we picked as support, so like Hayden James. He’s with us. We’re both really like him from doing a stint in Australia, so we were able to get to know him. And we really like hanging out with him.

What’s your favorite recent album drop? Or what are you listening to right now?

I’m actually listening to Gold Panda – lucky Shiner and then Flying lotus – L.A., which is one of my favorite albums of all time. It’s kind of like all the music I have on my phone since we’re in the middle of Missouri most of the time there’s really no service anywhere, so I’ve had those on repeat.

What’s the most embarrassing thing you listen to?

I don’t have too much embarrassing music right now. But I remember having a bunch of Incubus. I mean we’re talking middle school. But that’s kind of embarrassing.

That’s not that embarrassing. I’ve got way more Coldplay than I’d like to admit to.

Coldplay is not bad. I don’t know why people hate on them. They’re super talented. Especially old Coldplay.

So, we’re in Colorado and you’re finally headlining the famous Red Rocks, what’s going through your head?

Oh man I’m sure I’d be thinking that it’s a dream come true. And I’d also be extremely intimidated, I’m sure. But yeah, I don’t even know. I’d have to try it to tell you. I’d probably need a couple drinks to not pee my pants out of nervousness. But yeah it would be a dream come true to play there for sure.

Well, we’re going to do this cycle for another half a year. We’ve got some shows in Europe and maybe get to Japan hopefully. I’m really excited for that. Just to see more of the world, outside the U.S. Back to Australia, see New Zealand. It’s always been my dream to travel so being able to do that while doing what you love is amazing.

The international tour is interesting too because a lot of producers will come back and their sound changes a lot because they discovered a really cool new instrument or a different sound and they really open up to a wide range of sounds.

And we’ve always been big fans of world music and travel sounds. So we’re really excited to see what the rest of the world is listening to and how they come out and watch shows. It’s just going to be a really unique experience.

Well I’m really excited for you guys. You have come a long way in such a short time and that’s mainly because people really adore your music. So I’m amped to see where you guys go. Go decompress and watch some Game of Thrones on your day off!

Haha, yeah thank you! I’ll see you at the show!