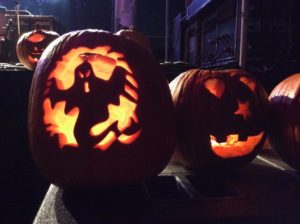 Where: El Dorado County Fairgrounds in Placerville, CA (about an hour east of Sacramento)

Pros: This intimate festival is located in “Old Hangtown” or Placerville, CA, a quaint, historic and beautiful gem that I otherwise would have (probably) never had the pleasure of passing through. The smallness of the festival combined with that laid back Northern California vibe (think: lots and lots of Tahoe-based Deadheads) makes for a seriously chilled out party. Having an actual “Halloween theme” causes the already enthusiastic “hobos” to really bring out their most creative wardrobe accoutrements to this extremely family friendly fest.

Cons: Well, Placerville isn’t exactly over the river and through the woods, so to speak. But it makes for either a really scenic (multi-day) roadtrip or a quick (and fairly cheap) flight. Camping is available, as well as lodging options at various hotels and B&Bs in town. 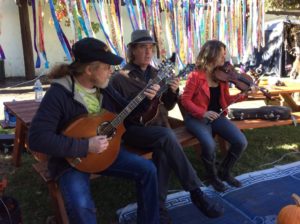 The history of Placerville is rich with ghosts of hangings past. The town got its nickname “Hangtown” during the Gold Rush in 1849, where it was a hub for mining operations and notorious for–you guessed it–hangings. It later became known as Placerville in 1854 after the local churches petitioned for a less ominous sounding name.

The Hangtown Ball brought together an enormous cast of talented musicians in a very tiny space, which fostered a charming environment for inevitable collaborations. Artist-at-large Allie Kral (with her mighty fiddlin’ skills) sat in during multiple sets with our gracious hosts, Railroad Earth, as well as several other bands. Timmy Carbone and Andy Goessling also appeared on various stages making for proud cameos from humble men. Jeff Austin and Danny Barnes popped in the background during moe.’s set, with Allie, of course, bringing an onslaught of strings to their already rockin’ set.

The Halloween theme also shook loose more covers than normal. Who doesn’t love a bluegrass cover of Jefferson Airplane’s “Somebody to Love“? (Thanks, Brothers Comatose!) The Shook Twins did a “folk-no” (folk-techno) a capella version of Tears for Fears’ “Mad World“ during their main stage set Sunday afternoon, involving impressive beat boxing and looping. ALO played a jaunty rendition of David Bowie’s “Ziggy Stardust,” but modified it to pay homage to “Ziggaboo” Stardust… “Ziggaboo playyyeeddd… the drummmms.” 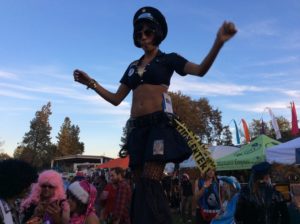 The Meter Men and the Motet provided a jolt of supremely funky stuff during their respective sets. Colorado’s own Motet was also responsible for keeping everyone up all night with their late night set on Saturday (2-4am), where they played all Jamiroquai tunes. Leftover Salmon‘s Saturday night set with Bill Payne from Little Feat was a jammy, high energy bluegrass kick in the pants… and even made everyone forget that it had poured rain all morning, causing the local Tahoe favorites Dead Winter Carpenters to move their afternoon set indoors. 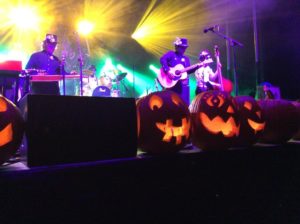 The shining moment of the weekend was a long and dramatic rendition of “Birds of America” by Railroad Earth during their Sunday night set, which featured elegant stilt walkers flapping shimmering wings in their wake, day-glow bird-masked dancers on either side of the main stage twirling about, and a parade of feathery fake birds that bounced across the stage, leading straight into an explosive “Elko,” with a guest appearance from Al Schnier (moe.) on guitar wearing his fluffy orange antennae headband that quivered in the evening breeze.

Take the stellar music, good vibes and hilarious costumes and add some tasty food vendors (ginger fried plantains Ghana-style, mango-lime agua fresco from the taco stand, fresh fruit smoothies and sizzlin’ BBQ), pumpkin carving, workshops (including a morning meditation session led by Tim Carbone) and some California sunshine and you’ve got all of the ingredients for a delightful weekend.

The Hangtown Halloween Ball is one festival that will naturally become one of my annuals. And it was all too easy: no crowds, no traffic, no lines, no problem. I even got to enjoy a continental breakfast with Andy Goessling, Allie Kral and Jeff Austin at my hotel.

Check out yours truly in full “Straight Off the Mothership” themed regalia in the Sacramento News & Review article, along with some more great photos of the bands from the Hangtown Ball here.

Listen to Railroad Earth’s track “Hangtown Ball” off of their latest album Last of the Outlaws:

All Photos Courtesy of Kathy Krisinski