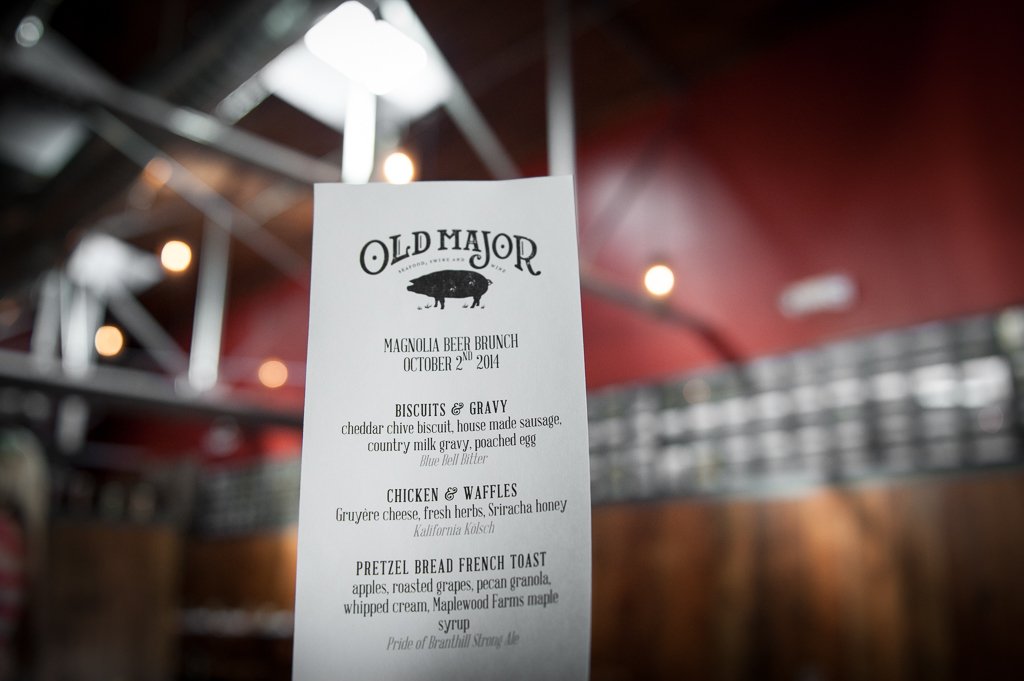 What: A three-course brunch & Magnolia beer pairing at Old Major for the Great American Beer Festival.

When: Running this weekend only, October 2nd-5th.

Pros: The bold and unexpected craft beer that Magnolia Brewing creates would please even the snobbiest of Colorado beer snobs. The Biscuits and Gravy and the Chicken and Waffles were so well made with expertly cooked sausage and chicken, that they blew the rest out of the water.

Cons: It only lasts this weekend, so hurry.

This meal is really well thought out. Not derivative of anyone’s desire to be liked, it is the Magnolia Brewing Company and Old Major’s desire to be delicious. Humble, they aim to please their own taste buds. If everyone else follows, great. Both of the companies have dynamic, small roots with a growing cult following that has lead them to this point. 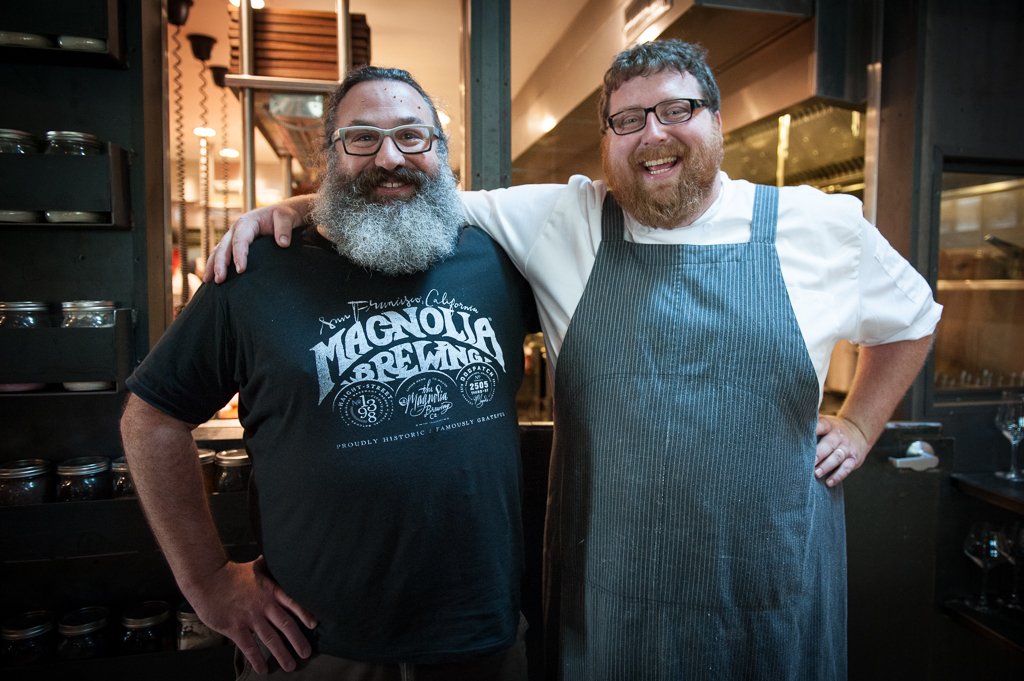 17 years old, Magnolia Brewery and Gastropub is a micro-brewery out of San Franscisco’s Haight and Ashbury neighborhood. Beginning in a basement, it grew from word of mouth and developed a prestigious, sought after demand. Owner and brew-master Dave McLean reminisced about how they used to work in such a small beer laboratory, they would bump their heads on the ceiling to brew. Slow, steady growth and dedication to good beer, were the key ingredients to Magnolia’s success.

National acclaim for Magnolia is growing, and Old Major’s General Manager August believes it is a match made in beer-and-waffle heaven. The ideologies they bring to their crafts are both masterful. The combination is harmonious. Even head chef and owner of Old Major, Justin Brunson and the Magnolia creator Dave McLean, look alike. 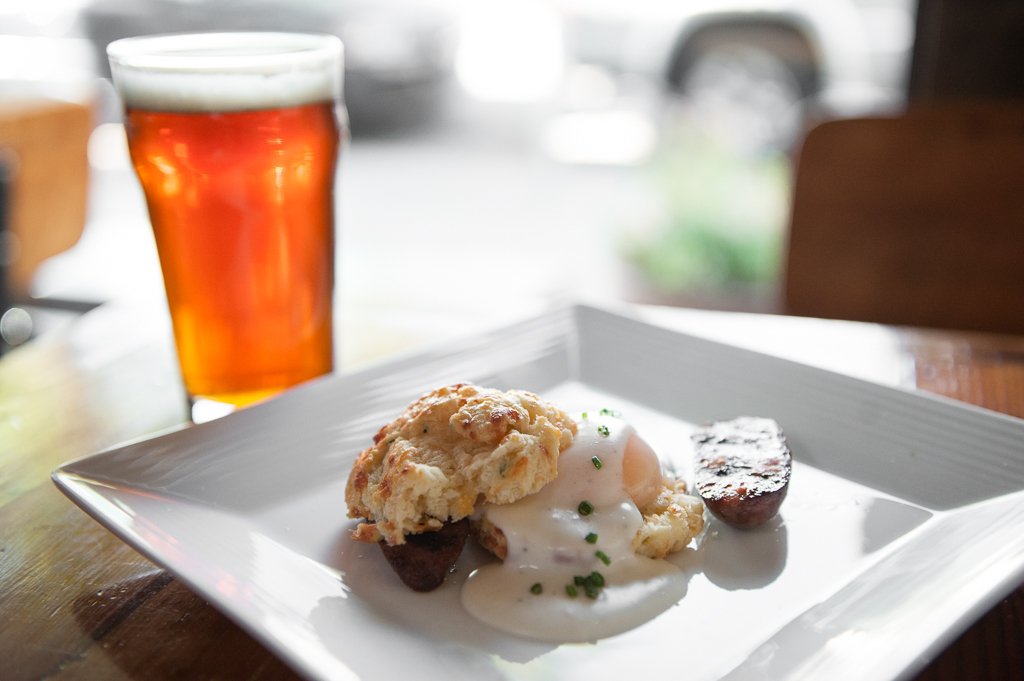 We began with the Biscuits and Gravy. The cheddar-infused biscuit was delicious, along with a classic and minimalist gravy. Yet the housemade sausage was the absolute star of the dish, packing all the best flavors on the plate. Instead of grinding up their meats, Old Major displays them proudly for the world to see. Made with a brilliant char on the center of the sausage, it was smoky, well spiced, and well balanced. This paired with Magnolia’s Blue Bell Bitter. The largest serving of beer for the meal, it also happened to be the most lively, spiced, and amber of the three. 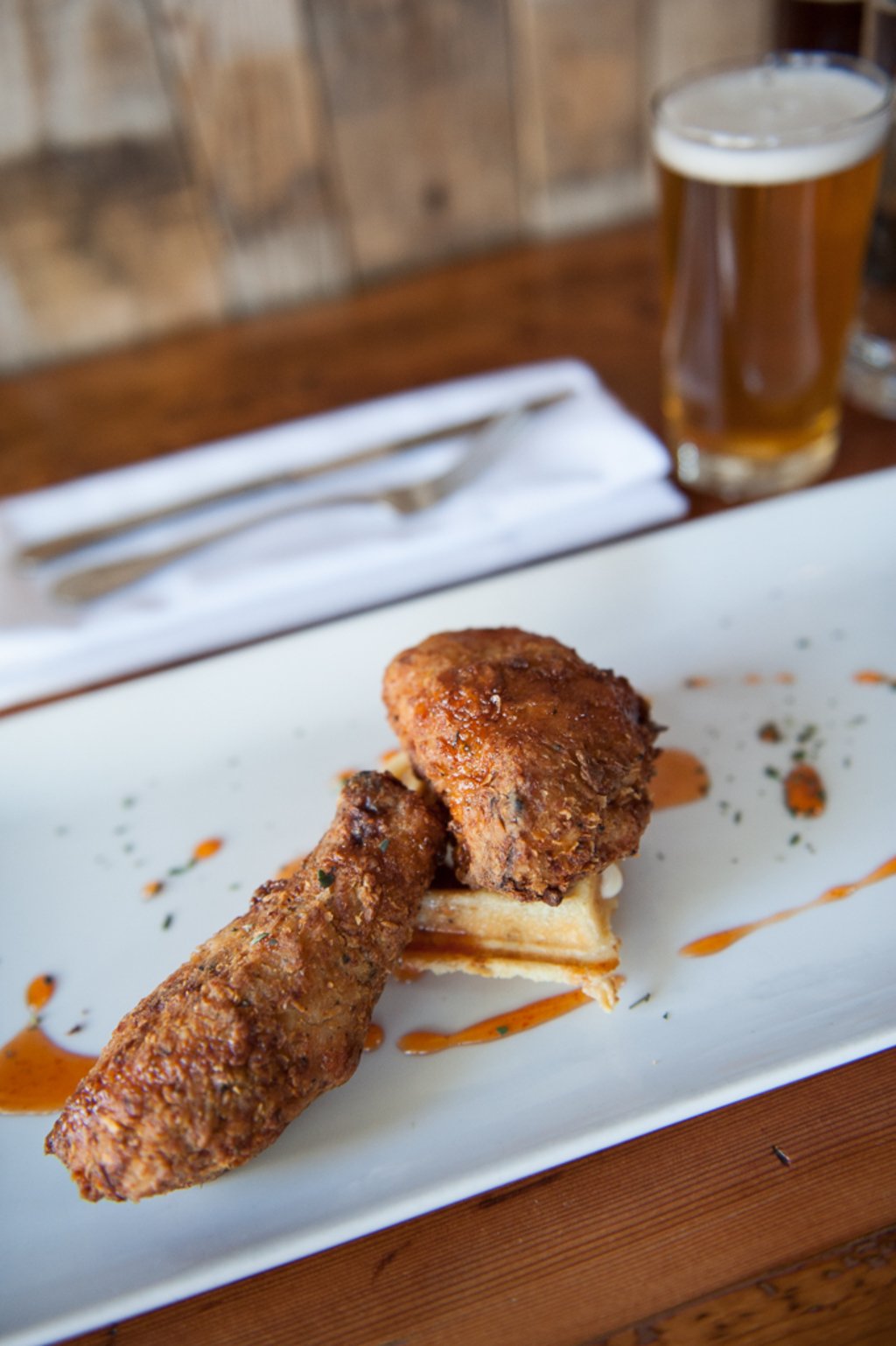 Their second course was comprised of an absolutely killer Chicken and Waffles. This dish was a bit spicy, but in the best possible way. A sriracha honey syrup, that actually packed quite the punch, was glazed over the chicken atop a basic waffle. The chicken itself was a bit peppery, adding to the plates already spicy palette. But the meat. My god, the meat. Old Major cooked a very juicy, very flavorful, and exquisite chicken.The obsession with meat began in their equally-modest roots in this abandoned roller rink in the Highlands, as a charcuterie. It shows. The meat is consistently the star of the first two dishes, as your taste buds are taken through the complexities and deep flavors of Magnolia beers. This dish paired well with the second up, a Kalifornia Kolisch. This light and citrusy ale may have been my favorite of the day. The entire menu revolves around a Grateful Dead theme. Consider this meal an homage to dead-heads, craft beer snobs, and everyone in between. 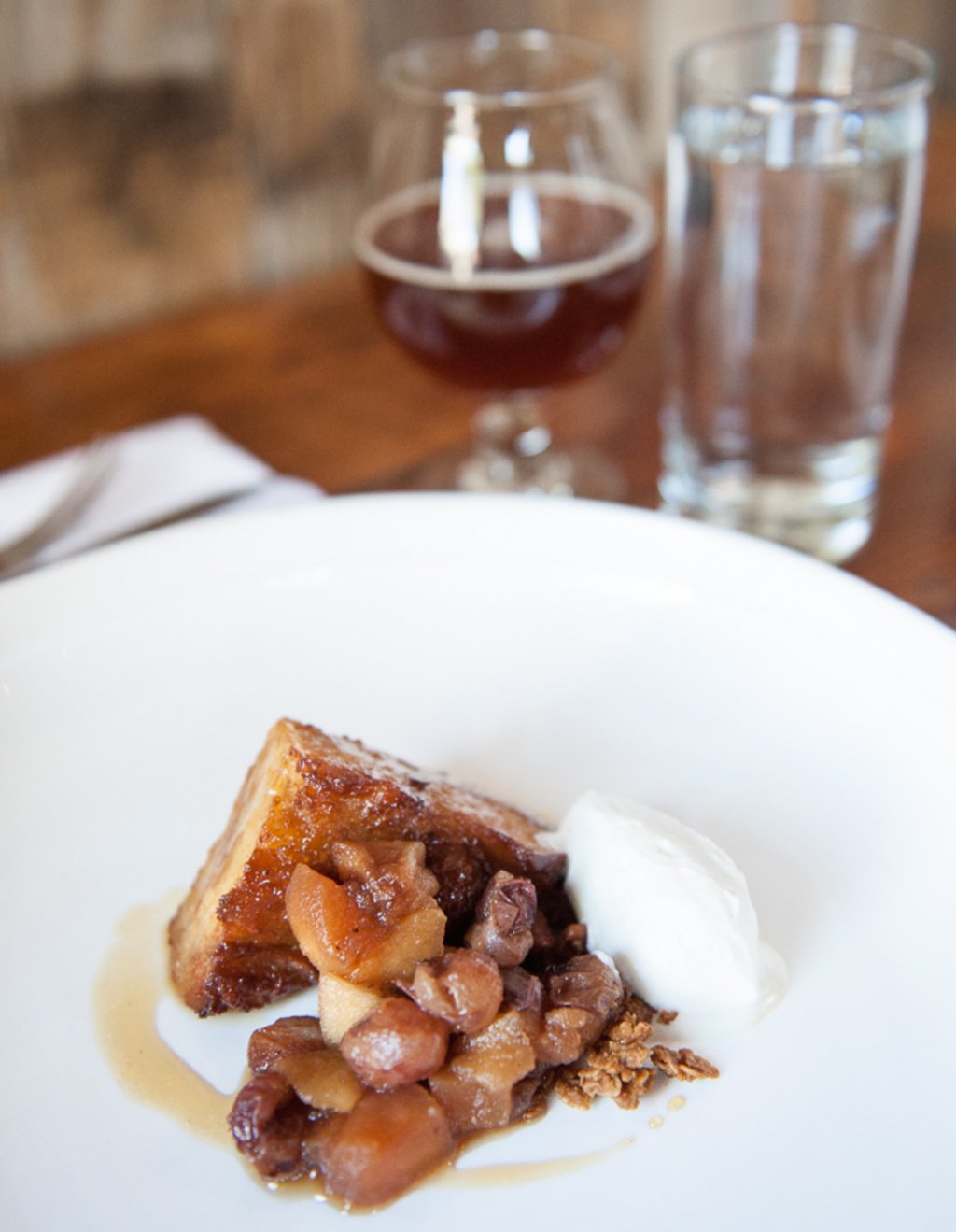 The third course, or dessert, would be a delicious pretzel bread French toast with a grape and apple compote and Maple Syrup. This came paired with Bride of Branfill, a rich and sultry IPA that boasted the highest alcohol percentage. The entire brunch builds in richness, the thread is wove evenly through the beer and the dishes. An absolutely must try for the Great American Beer Fest weekend! 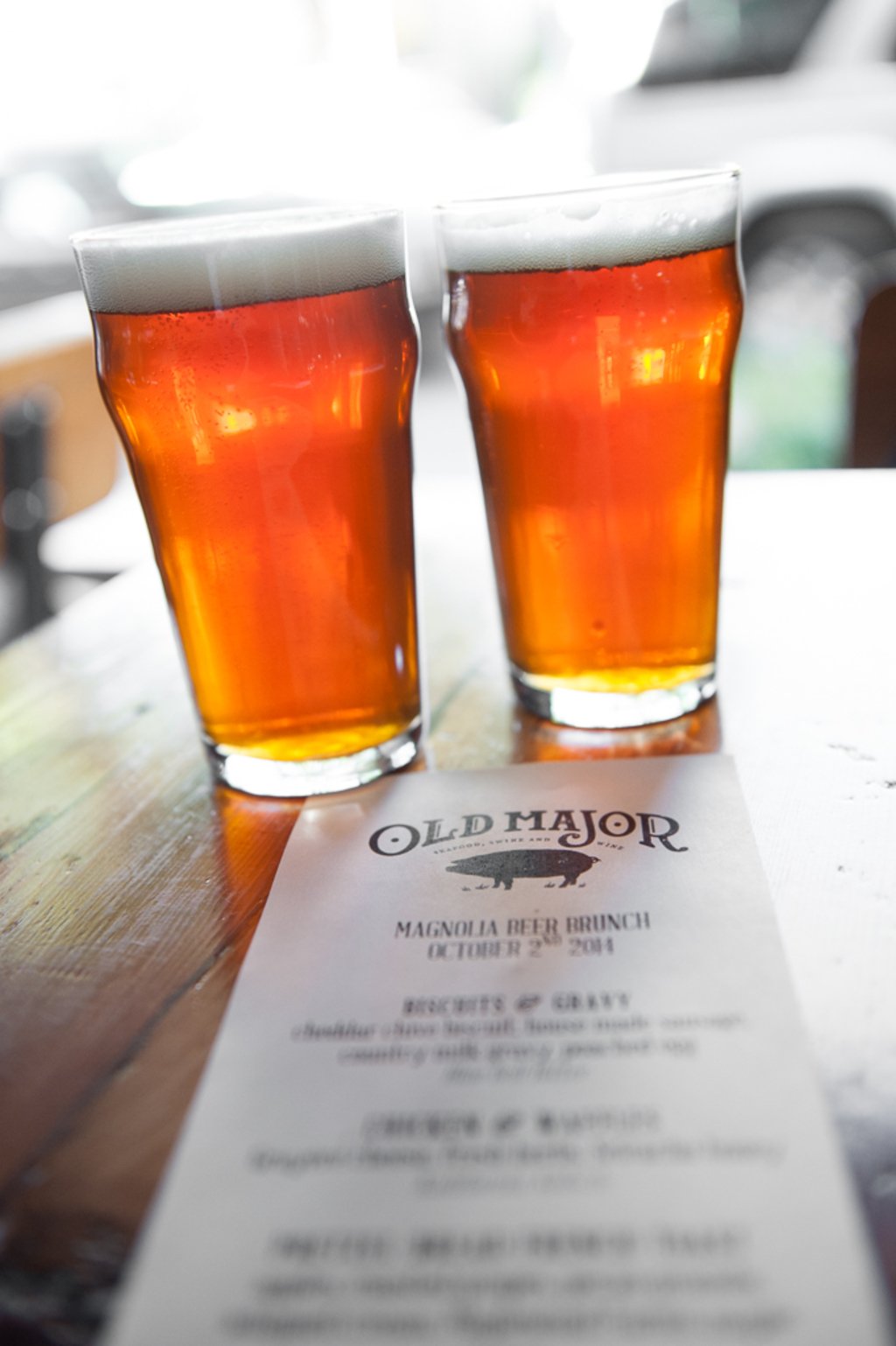