First Bite: Fall In Love with Kobe An Shabu Shabu 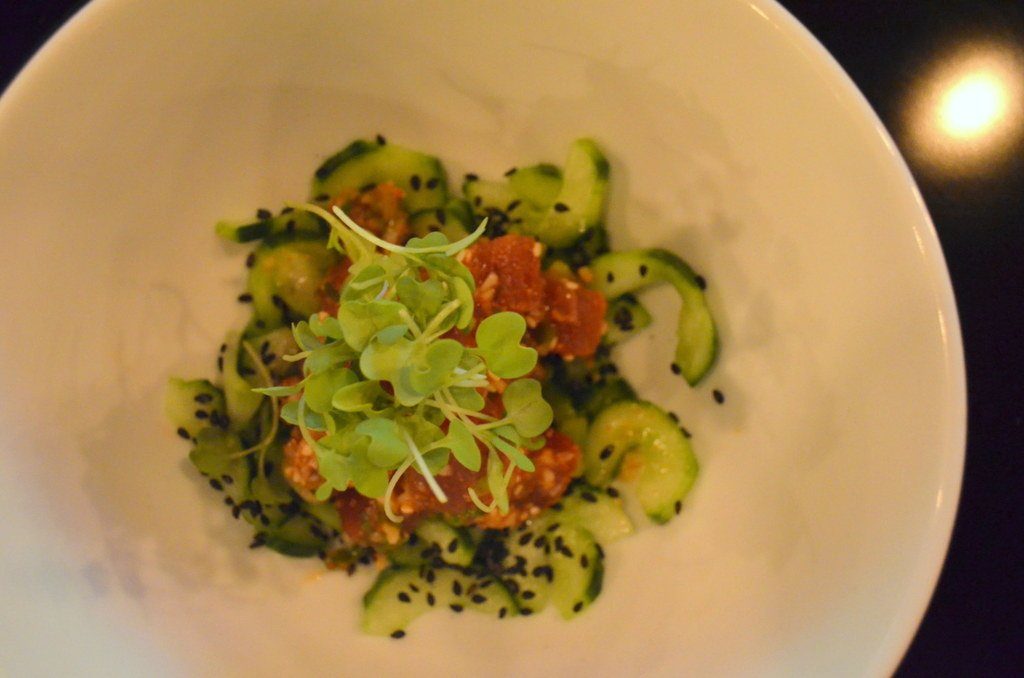 What: Kobe An Shabu Shabu

When: Sunday, Tues-Thurs 5pm to 10pm. Friday and Saturday 5pm to 11pm. Saturday and Sunday “Endless Shabu Shabu and Sukiyaki” From 11am to 3pm.

Pros: Where do I begin? The first restaurant endeavor by Marco and Michelle Trujillo, Kobe An Shabu Shabu is a quaint space with an out-of-this-world hot-pot concept, new to Denver. From the cocktails, to the vegetables, to the beef, to the broth and sauces, this is a wonderful restaurant experience that must be tried to be truly understood. I can’t get enough.

Cons: That I went my entire life without trying Shabu Shabu until Kobe An.

You never forget your first Shabu Shabu. Imagine pho and fondue (phondue, if you can appreciate a good pun) meet in a beautiful, sensual hot-pot made by the Japanese cuisine experts at Kobe An. Kobe An Shabu Shabu isn’t simply a restaurant—it is an experience. Shabu Shabu translates to “swish swish,” referring to the motion of swooshing the beef in the broth for a brief moment. The idea is to keep the beef barely cooked, and really allow the quality of the ingredient to shine through. Maybe it’s the billowing steam, maybe it’s the sensation and smell of the broth and veggies stewing together, or the pure exotic nature of it all. This place is addictive.

The quaint destination will be found in the Lower Highlands inside the former Little Pepina’s, which was vacant for 20 years. The location has once again found its heyday with Kobe An. Ambient lighting, wooden bar and details, and metal whimsical fixtures within the dining room add to the welcoming air. There is something about this space that makes you feel at home. It also oozes date-night in its sensual decor, but holds a draw for everyone with its spectacular dining experience. 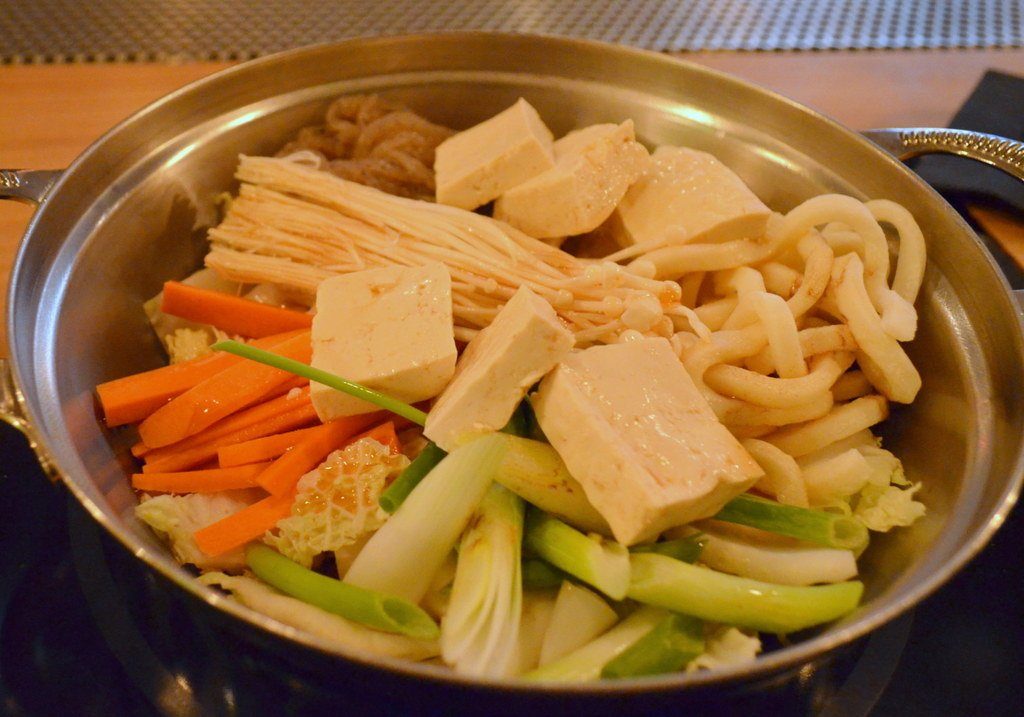 Sukiyaki at Kobe An Shabu Shabu, photo by Lindsey Bartlett

Michelle and Marco Trujillo opened Kobe An Shabu Shabu in July of this year. Michelle’s mother Kimie Loffler is the chef and proprietor of the original Kobe An Japanese restaurant that opened in Boulder in 1979.  The Loffler family has been a staple in traditional Japanese cuisine in Denver ever since. The family just recently decided to move their Kobe An spot in Lakewood, formerly off of Union. Marco explained that they are looking to reopen in an amazing new location this year at 231 Milwuakee St. in Cherry Creek, after recently closing the Lakewood location October 18th.

In LoHi, Michelle and Marco’s Shabu Shabu dream has become a reality. The space emulates the neighborhood in its new-school charm intertwined with old-school appreciation of the Highland roots. Marco grew up in this area, traveled and worked in culinary hot spot cities, then returned to his home in Denver to see the huge spike in real estate and fine dining just over the past few years. He and his wife are now in the right place, at the right time. Marco understands the progression of the neighborhoods history in food, and brings this appreciation to every table.

The menu is small, but packs a big punch in quality, fresh and locally sourced ingredients. Michelle expressed her desire to add sushi to the menu in the coming Spring/Summer season. Brilliant, yet the hot-pot parlor focus of Kobe An Shabu Shabu is the ultimate comfort food going into the Winter months.

Bar manager Mark Mangold crafted a fantastic Saketini, truly spoiling us while we awaited our Shabu Shabu adventure. We also got to taste the Palisade There’d Be Days Like This, another gem for the pun connoisseur, made up to three different ways with white wine, ginger beer, or beer. Using fresh Palisade peaches, and highlighting some stellar local booze, the cocktail menu is the perfect complement to start the light and eventually drool-inducing meal.

For something a bit closer to the sushi Kobe An roots, I love the appetizer Tuna Poke with Big Eye Tuna, cucumber, sesame seeds, avocado, mixed in their phenomenal ponzu sauce and topped with wasabi greens. The dish has a little kick towards the end, but it was welcomed. 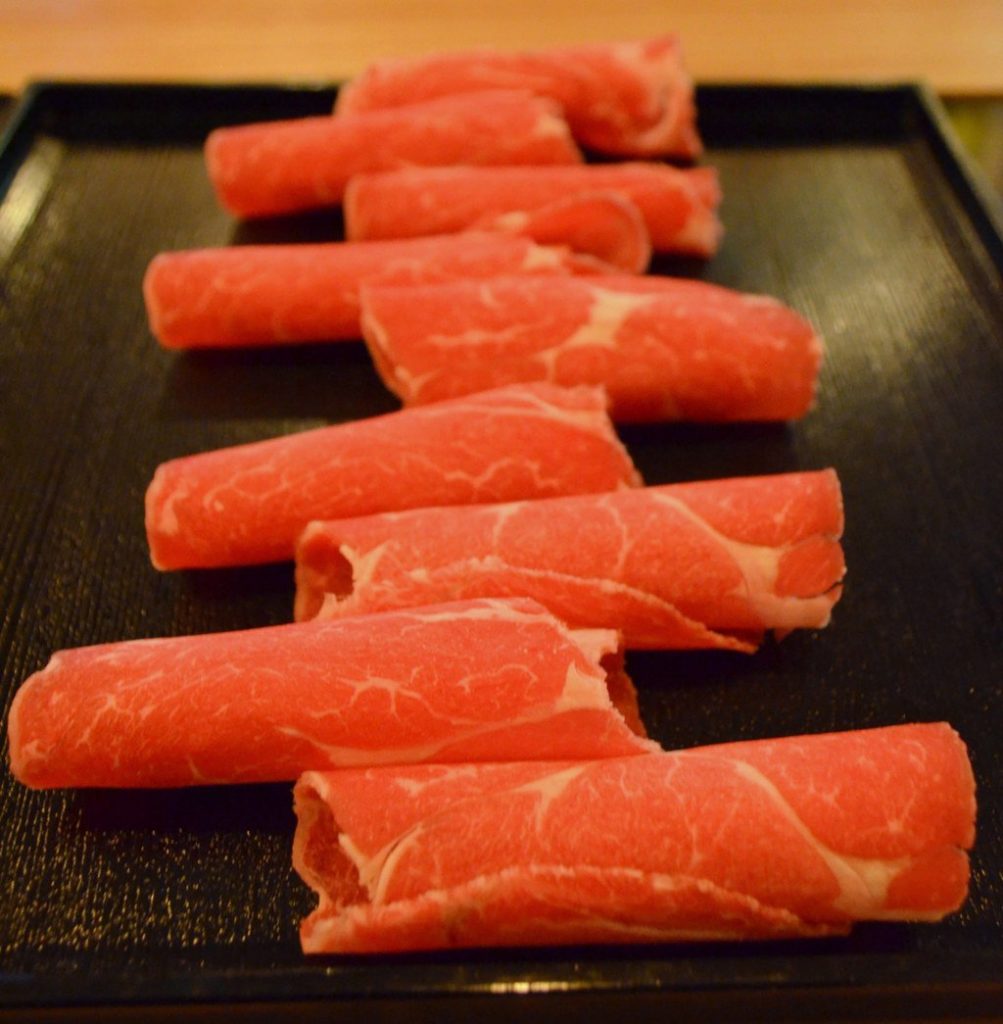 Then, comes the hot-pot. The server is wonderful in explaining each ingredient, the process, and the sauces to you. The Sukiyaki hot-pot will come filled with delicious vegetables, cabbage, carrots, Udon noodles, another glass noodle similar to a saimai, and Tofu. The broth radiates with Asian “Umami” meaning savory spices like kombu, which is  used as a natural glutamate for flavor and healthy benefits, and tastes similar to that of a rich miso. Of course on the side, comes the star of the meal— the beef. You have your choice of the vegetarian, 21 day aged Rib Eye, Aspen Ridge Organic Beef, and a stunning Snake River Farms American Kobe Beef. All three will melt in your mouth with absolutely unprecedented freshness and rich flavor, but the Kobe…My God. The perfectly marbled Kobe cut is one of the highest choice beefs found in the United States, and most coveted to serve. Ever since Marco gave me a taste of Kobe beef, I have been dreaming of it.

Each place at the bar has its own burner. The tables have less, but the server can always bring out another burner to add additional hot-pots. In general, it is a hot-pot per person. But they are quite large, and reasonably charge only $3 to make one hot pot for two. The burner conducts with a magnetic metal only, so the hot-pot itself is the only thing on the surface that will pick up the heat. Even the handles of the specially made pot will not burn you. They thought of everything.

On top of the Sukiyaki, we have the classic Shabu Shabu, in which you can choose between a healthy, sodium free, really minimalist broth, and a rich, sultry, miso-esque broth. Both are tasty, but the first broth really lets the flavors of the vegetables and kombu speak for themselves. For Shabu Shabu, you will begin with a broth and then continue to add the vegetables and tofu along with the noodles stew in the sauce. Veggies will cook at different speeds, so there is a careful cooking ritual to the madness. You briefly swish the beef, and then dip in either of the two fabulous sauces that accompany. Ponzu, a citrus soy sauce, and Goma Dare, a sesame based sauce. I dipped in both, as they can be added to by the condiments and green onions founds in the center. Both Shabu Shabu and Sukiyaki have totally different palette and experience of flavors. 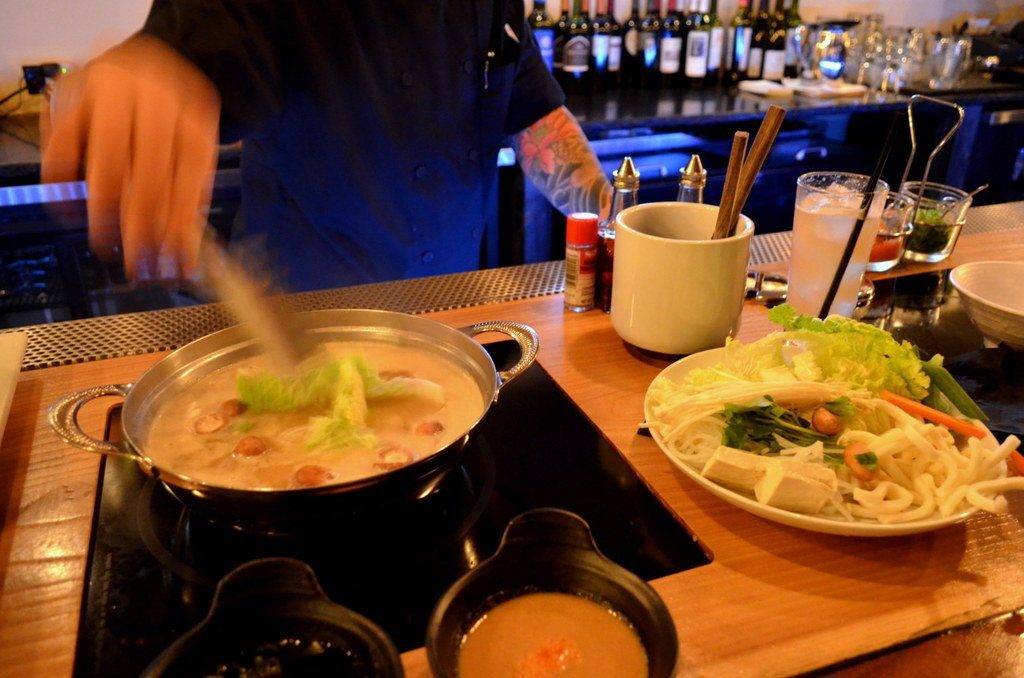 Marco giving us the ultimate hot-pot lesson at Kobe An Shabu Shabu, photo by Lindsey Bartlett

Out of the two hot pots, I loved the Sukiyaki the most. The only difference is that the Sukiyaki was a bit sweeter, while still remaining healthy. Instead of adding the vegetables and tofu individually at your will, the Sukiyaki comes with all stewing in the pot. Best part of the Sukiyaki: Your server will also mix a raw egg with some soy sauce and encourage you to dip the meat and all your veggies and ingredients first in the broth, then in the egg, and take it to the side bowl or side of rice to enjoy. Something about the raw egg really brings out the flavor of the beef.

For dessert, we tried the simple yet not understated Kakigori made with shaved ice, condensed milk, mochi, seasonal fruit, and love. The ice is shaved super thin and becomes a consistency that will coat your tongue and melt in your mouth. It is shaved from a house-made ice—something that Marco insists upon— so the quality along each step of the process is remarkable. Simple, yet towering and elegant in execution.

Kobe An is everything that fine Japanese cuisine should be. It was the richest, most decadent meal I have had in a long time and absolutely an experience that is out of this world for the Denver dining scene. Kobe An Shabu Shabu excels in the utmost unique way a restaurant can—by being unapologetically themselves. 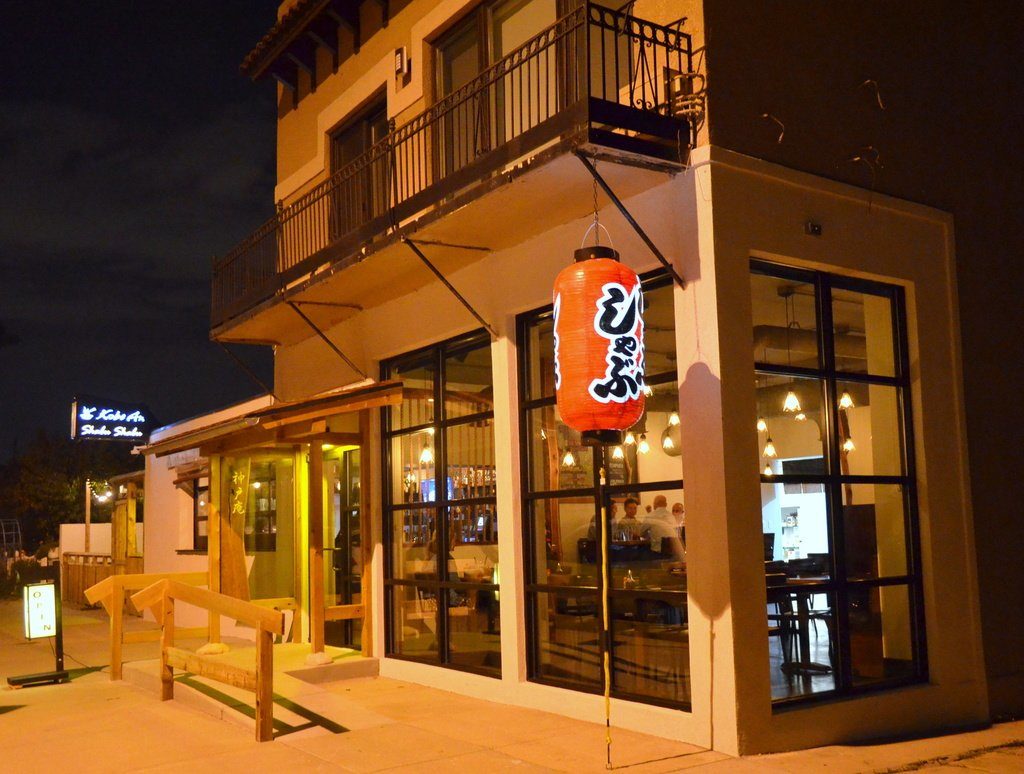