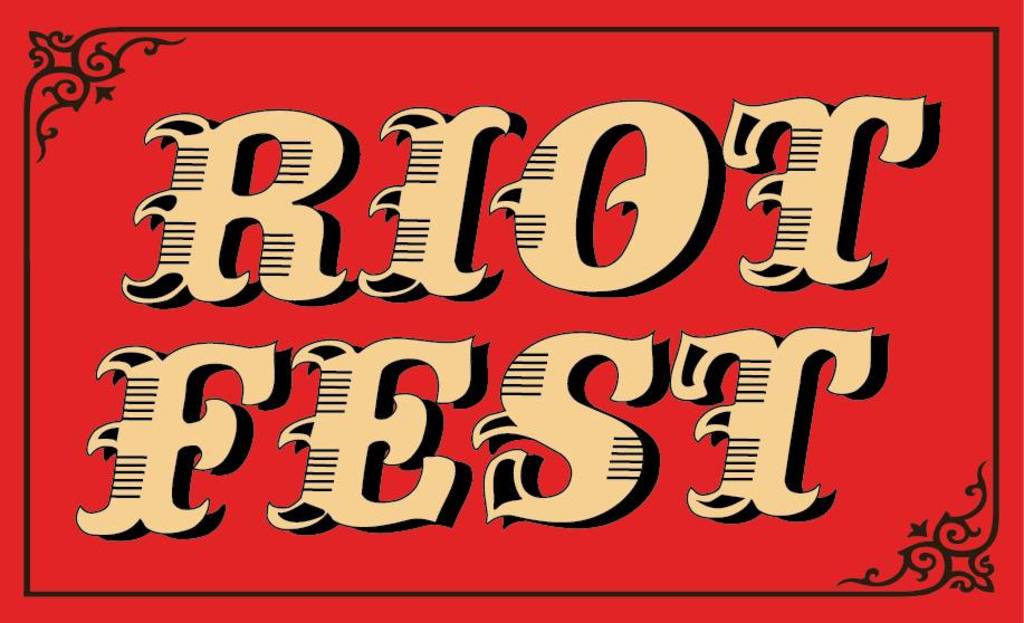 With Riot Fest Denver now just a week away, it’s time to gear up for one of the biggest weekends in music that Denver has seen this entire year.

The sophomore season for Riot Fest Denver did start off with a rather precarious situation involving festival location, as Byers, Colorado — last year’s hometown for Riot Fest’s inaugural Rocky Mountain concert series — rejected and voted against the festival taking place in the eastern Coloradan “middle of nowhere” plains-ville. After a few days of deliberation, the Riot Fest hierarchy decided on a location centered around one of the state’s most active sports stadium … Sports Authority Field at Mile High.

Sophomore slump … I think not.

Not only has the festival become more centralized, but the dirt, dust, hail, tornado warnings (and just about any other festival-jeopardizing weather-related event that occurred last year), will be all but non-existent on the Denver Broncos’ burning blacktop lots. (To note: The Denver Broncos will be visiting the Seattle Seahawks for some Superbowl retribution the same weekend.)

With a 3-day lineup that rivals any festival of the entire summer, Riot Fest will be rocking from start to finish in the Mile High City. 303 Magazine has put together our own 3-day concert guide of who not to miss (3 bands per day). Check it out below.

See you on the blacktop!

Longtime alt-rockers, hailing from sunny L.A., Weezer, will be headlining the first night of Riot Fest. And not only will they be headlining, they will be performing one of their most coveted and respected releases in their 20+ year career, The Blue Album, in full, front to back.

The debut record (The Blue Album) that set the tone for their entire career has also just turned 20 years old, this past May, making the event that much more special.

If that’s not enough incentive to stick around for their 10:45pm start time, then I’m not sure what else would be. But, expect a solid hour and fifteen minutes of pop rock at its finest, from a band that has earned its place in rock (and pop) history.

Seeing a frontman like Rivers Cuomo ain’t a bad way to kick off the entire Riot Fest weekend. 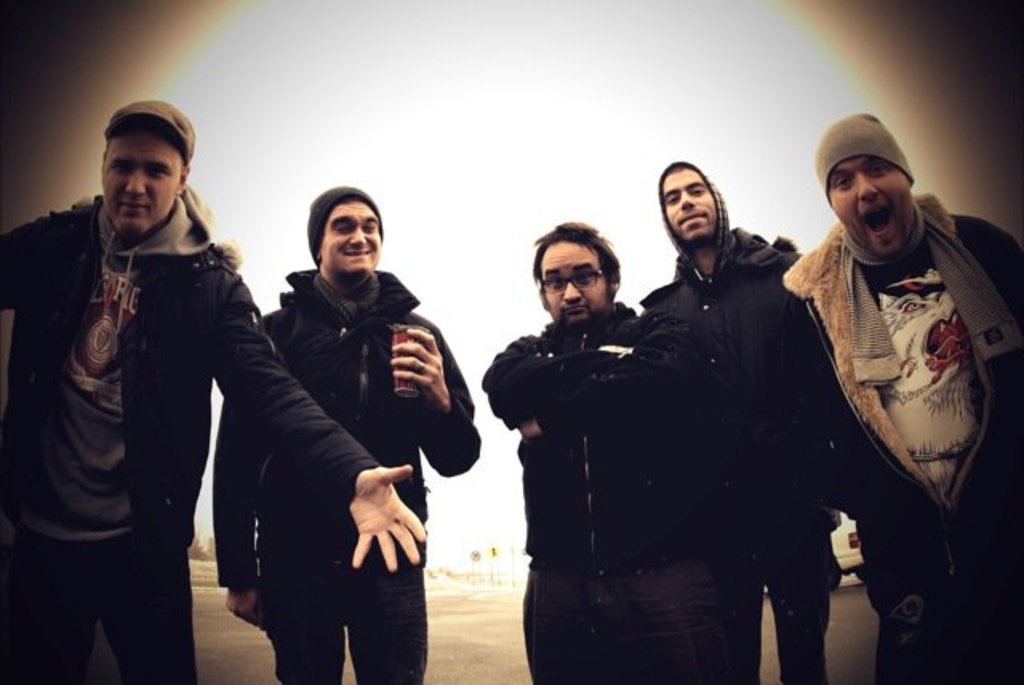 Sometimes it takes a band like New Found Glory to really put things into perspective. After their emergence in 1997, the pop punk workhorse that is NFG made their way onto the scene with hits like “Hit Or Miss,” “All Downhill From Here” and “My Friends Over You,” and never looked back.

But it wasn’t always the easiest journey, as fellow pop rock/pop punk brethren Blink-182, Sum 41, and even Simple Plan seemed to garner much more of the commercial attention. Relentlessly, the band pressed on and continues to pump out new albums, tour constantly, and put in the legitimate leg-work that most won’t find from their favorite radio pop artists.

For one helluva good time — perhaps while indulging in some highschool or middle school nostalgia — come check out one of the hardest working bands at Riot Fest, who have been kicking ass, and have stuck to their true pop punk roots for 17 years. 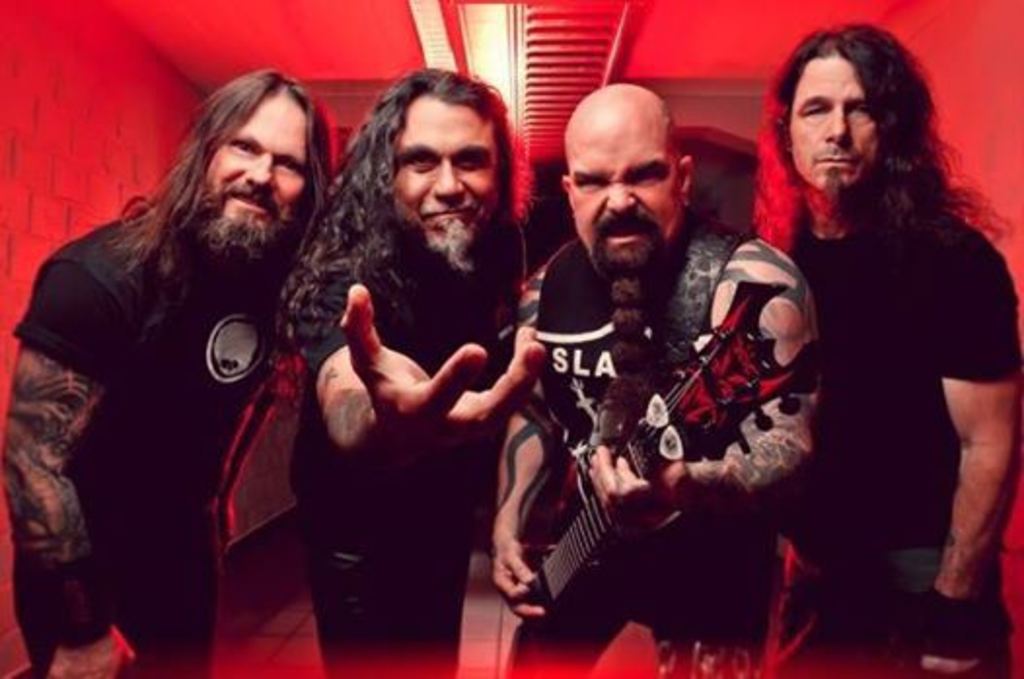 A band that truly needs no introductions …

Slayer have been inspiring, shredding and thrashing for 30+ years. After helping define a genre (thrash metal) and becoming one of the most successful, and most influential, metal bands this planet has ever seen, Slayer continues to tour the world, spreading the good word of metal every step of the way.

It’s a bit out of character for a punk-based festival like Riot Fest to host such an artist as a co-headliner … but then again that’s exactly what punk is all about.

If you’ve never seen Slayer before, or for that matter, if you’ve never even heard Slayer before, then now is your time. Not only will their music all but terrify every inch of your core, but their pure musical ability will surely make you shudder, as songs like “Raining Blood,” “War Ensemble,” and “Angel Of Death” tear their way through your innocent, metal soul.

Performing for an unprecedented two and a half hours, Robert Smith will be guiding audiences on a journey through musical history, as some of the biggest singles in all of alternative/pop music (“Just Like Heaven,” “Friday I’m In Love”) are sure to have the crowd singing along in unison.

This is one for the ages right here, because it’s simply not everyday (or every weekend) that you’re able to see bands like Slayer and The Cure perform within less than 24 hours of one another … let alone on the same tour.

Whether you’re a fan of The Cure or not, this band will be putting on a ‘must see’ performance, as their other smash hits like “Lovesong,” “Boys Don’t Cry” and “Close To Me” pull the audience back to the 90s and 80s respectively.

(A two and a half hour setlist at an “all day festival” is yet another thing that Riot Fest has planned that is beyond out of the ordinary ... that’s punk.) 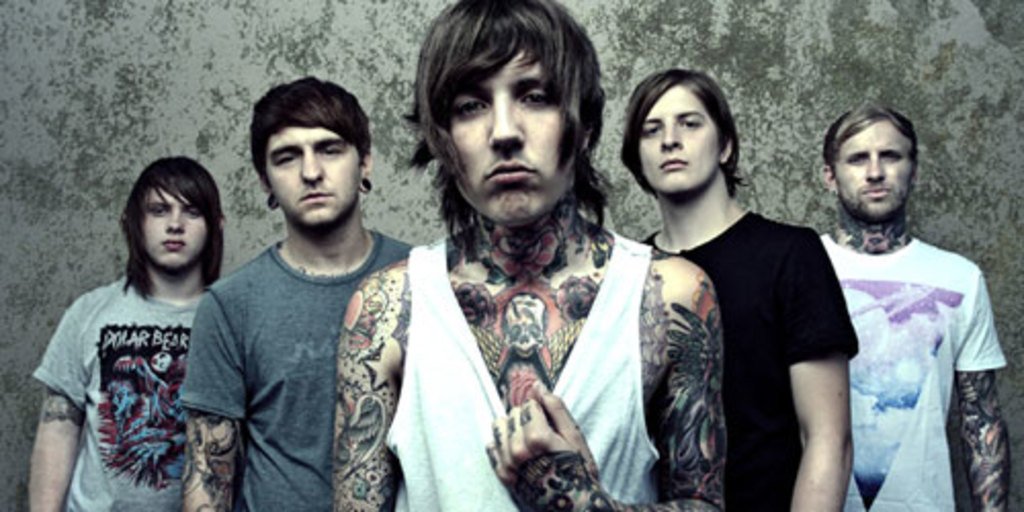 BRING ME THE HORIZON

Indie-label and alternative-genre aficionados alike are bound to have heard of Great Britain’s finest in up-and-coming death metal-turned-alternative/punk/hardcore five-piece, Bring Me The Horizon.

For the past decade, Bring Me The Horizon have been terrorizing stages, mosh pits and festivals in more ways than one, including that of their on-stage performance. With each new album has come an almost entirely new sound and musical expression, from a band that seems undaunted by any new task, tour or album (or any form of rejection).

From their influential (and iconic) debut deathcore record (Count Your Blessings), to 2008’s Slipknot-influenced, heavy-hitting Suicide Season, 2010’s alternative/progressive-influenced mouthful, There Is A Heaven, Believe Me I’ve Seen It. There Is A Hell, Let’s Keep It A Secret, to their most recent release, Sempiternal, Bring Me The Horizon continue to impress.

Not only has the progression in sound, from record to record, fared better than anyone could have ever imagined, but the true skill and ability to pull off such progression (while keeping your original fanbase pleased) is just as mind-blowing.

Bring Me The Horizon are one of the most polarizing bands on the entire tour … Come find out why that is for yourself.

Many people (outside of alternative-based genres/scenes) have probably never heard of Glassjaw, and therefore would most likely initially deem them as an upcoming artist that’s yet to gain traction. Makes sense. Sounds right. Completely wrong.

Glassjaw formed in 1993, and may quite possibly be the most enigmatic band that Riot Fest has ever had the pleasure of doing business with. Since their inception, they have released a whopping total of two full-length albums — Everything You Ever Wanted To Know About Silence (2000) and Worship & Tribute (2002) — and four EPs to boot. (Try to remember that New Found Glory is releasing their eighth full-length next month to put some perspective on the situation.)

This is a band that has had more than just their fair share of problems, as their frontman, Daryl Palumbo, has too, also had more than a fair share of his own (as he suffers from Crohn’s Disease). Glassjaw, after recovering from a hiatus that stretched from 2004-2008, seem to be slowly moving forward with what fans hope to be the next stage in their confounding existence — the creating and releasing of that long-awaited third LP.

Sporadic member changes, one-off show schedules and appearances, and the usual random, newly leaked demo track has built Glassjaw into an alluring machine that the (nearly cult-ish) fanbase can’t get enough of. Somewhat similar to last year’s Riot Fest enigma, Brand New, Glassjaw seem to never go away, yet they never seem to be around. That’s why this opportunity to see them play such a festival like Riot Fest is one that shouldn’t be squandered.

Also worth noting: Glassjaw will be performing the very same night at The Marquis Theater for a Riot Fest Official Aftershow with Plague Vendor and Denver’s own newly reunited Solar Bear.

The solo careers that came from the artists that make up Wu-Tang Clan, speak for themselves, and on the behalf of the group as a whole. This rap group that formed in 1992 in New York City, comprised of RZA, GZA, Inspectah Deck, Ghostface Killah, Cappadonna, Masta Killa, U-God, Raekwon, Ol’ Dirty Bastard (1968-2004) and Method Man, are known as one of, if not the greatest, rap group to ever surface … Rolling Stone has even crowned them kings.

From video games (Wu-Tang: Shaolin Style) to clothing lines (Wu Wear), platinum-selling records (Enter The Wu-Tang: 36 Chambers), and an irrepressible amount of controversy along the way, Wu-Tang Clan have built an empire.

On Sunday, Denver, Colorado fans of all genres, and from all walks of life, will have their chance to see rap legends Wu-Tang Clan in the flesh — performing on a tour that (yet again) never ceases to amaze. With historically massive hits like “C.R.E.A.M,” “Triumph,” and “Protect Ya Neck” sure to be bumping through the crisp Colorado air, Wu-Tang Clan will be the one group that is a must see on the final day of the festival.

An incredible beginning (Slayer / Weezer), an unbelievable follow-up (The Cure) and an unforgettable ending (Wu-Tang Clan) should seal the deal on this year’s Riot Fest in Denver. 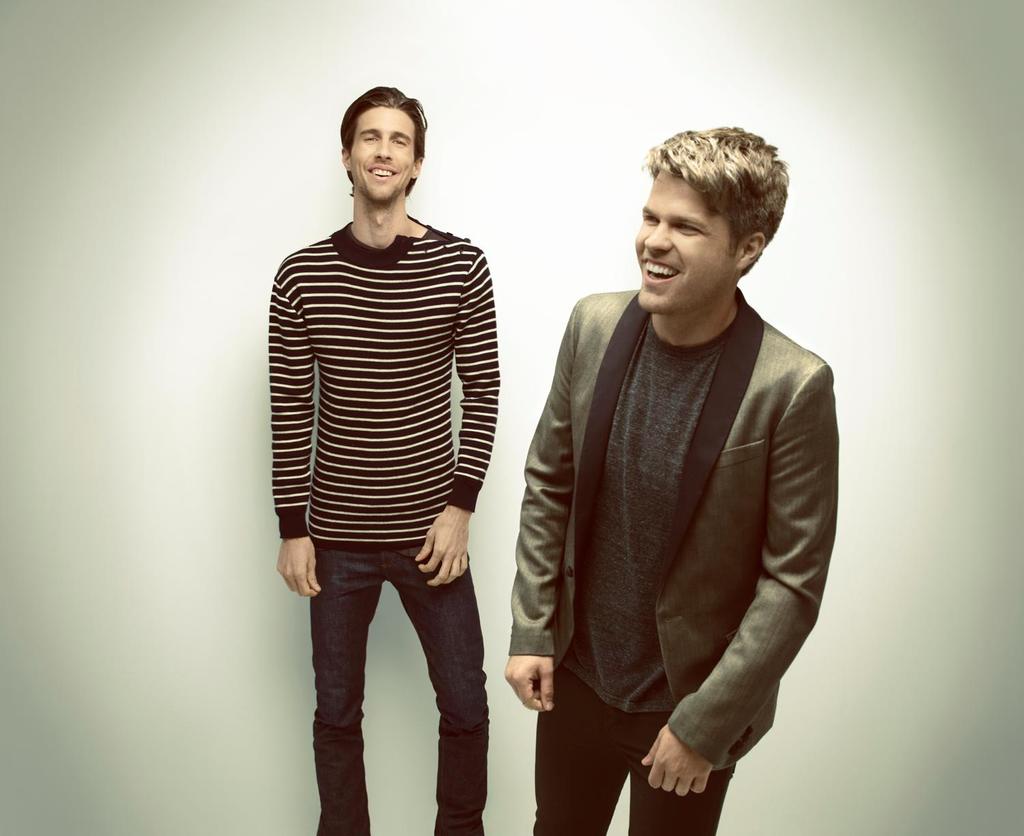 Colorado natives 3Oh!3 find themselves on the last day of Riot Fest, surrounded by a slew of incredible artists, bands, and musicians. But a benefit that they have over the rest is something we like to call “home field advantage.”

After smash hit single “Don’t Trust Me” took pop radio stations by storm in 2009, 3Oh!3 were on their way to becoming Colorado’s next big act. The two boulder natives crafted an album (WANT) that will forever stand as their breakthrough into mainstream, commercial success. Singles like “Starstrukk (feat. Katy Perry)” and “I’m Not Your Boyfriend, Baby” helped 3Oh!3 quickly climb to the top of hip hop and pop.

Now equipped with a third album (Omens), 3Oh!3 look to continue pushing forward, performing for their hometown fans on a stage that will, later that night, be graced by legends.

3Oh!3 never disappoints, always putting on a raucous show that is guaranteed to become a highlight of the day. Come see why, and how, these natives took Colorado by storm just a few years ago. 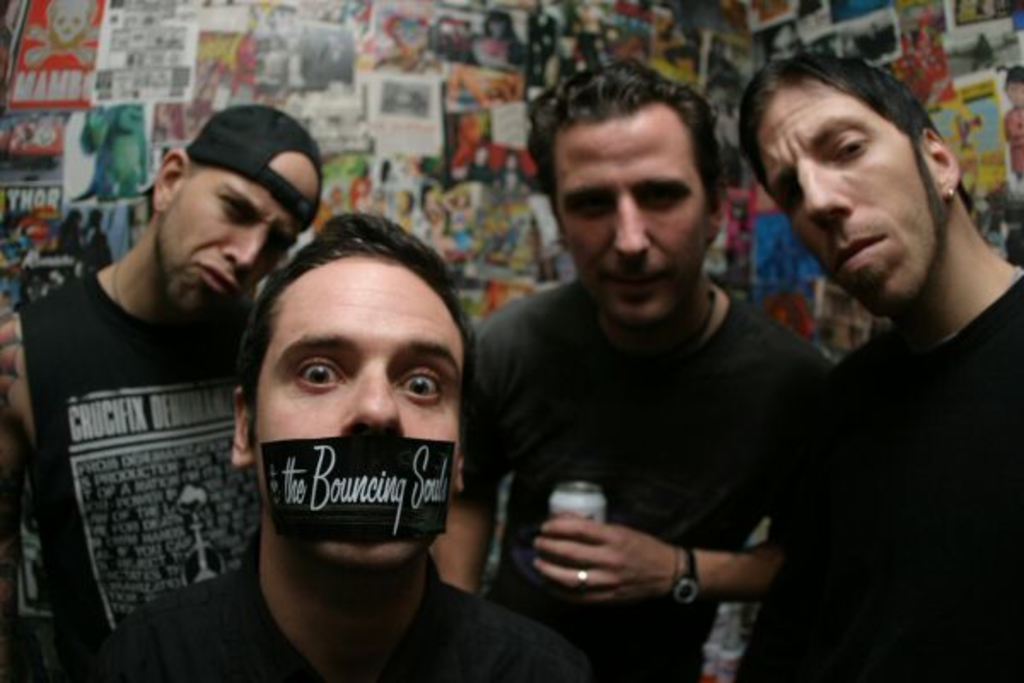 New Jersey’s own Bouncing Souls have pushed the punk scene further than they ever thought possible, since their inception back in 1988. Bands like Bouncing Souls and NOFX (also on Riot Fest) are the sole reasons why a punk festival like a Riot Fest was even started.

With nine full-length records, the Bouncing Souls have been making music the right way for the past 20+ years, always creating an honest, heartfelt record that ties directly into their roots in terms of sound and delivery.

While commercial success (in the form of radio and television play) may not have been entirely realized, the realism and truth behind their music, their sound and their stance on life shines greater than any numbers or charts ever could or will.

Bouncing Souls are a band that should and need to be continually recognized, not only for their dedication and hard work, but for their passion and sincerity. You may not find their songs being played on national radio stations, but you’ll find something much deeper and much more genuine.

The Bouncing Souls emulate punk rock at its very finest.