Believe it or not, not all of Hollywood’s hottest hits were shot in… Hollywood. In fact, some of the greatest films of all time traveled to our very own Colorado neighborhood. Whether a couple of shots here and there, or the whole movie, these were the top films that went Mountain Standard Time, immortalizing our mountainous beauty on film, and 303 Magazine Film + TV has got the lowdown.

In this blockbuster hit, all of earth bands together in order to save the human race from an alien attack. Independence Day was the highest-grossing film of 1996, and was shot in 72 days. Some of its most important parts were filmed in our very own Colorado Springs at the Peterson Air Force Base. Originally, however, the film might have had more variety than just our air force base due to the fact that the US military withdrew their support of the film after hearing of the Area 51 references. Not to mention the fact that the movie was banned in Lebanon due to it showing Israeli and Iraqi soldiers joining together to fight against the aliens. Ever since then, Lebanon has banned any film that features Israelis. (Who knew an extra-terrestrial threat would prove so… threatening.)

Still of David Bowie in The Prestige

Two rival magicians go to dangerous lengths to master the greatest illusion the world has ever seen. This dark thriller was an adaptation from a Christopher Priest novel, starring the two intense and magnetic actors, Hugh Jackman and Christian Bale. With a great basis to work from, the film’s extravagance only grew due to Priest’s insistence that one of his favorite directors, Christopher Nolan, be involved.  As audiences were drawn into the complicated plot, so were the characters in the movie drawn to our very own Colorado, on a quest to find the erratic Nikolai Tessla (played by David Bowie), in the hopes of discovering some of his mystical secrets. (See Coloradans?! Look how mysterious we really are….)

Heder and Ferrell in Blades of Glory

This ridiculous comedy stars none other than the hilarious Will Ferrell and Jon Heder. The two previous rivals must team up in hopes of recapturing their titles as world ice-skating champions. Both actors learned how to ice-skate for this film and were trained by Michelle Kwan’s coach, Sarah Kawahara. Kawahara actually said that Heder and Ferrell were easier to train than Kwan, and was hoping she would see them both in this last Winter Olympics… just kidding. However, the best part is that some of the ice-skating scenes within the movie were filmed in our capitol’s very own Denver Pepsi Center! Also, fun fact: when Jon Heder’s character responds to the press in perfect Japanese, this was not unusual for him — he is fluent in the language due to spending two years in Japan as a Mormon missionary. 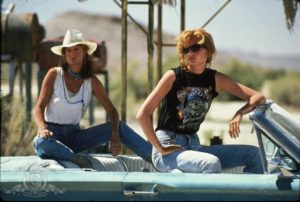 When two road-tripping women end up shooting an attempted rapist, they run from the law as well as their past. This many-times Oscar nominated film could have chosen no better backdrop than that of our dusty mountain terrain. Although our Colorado was graced with the presence of the beautiful Geena Davis and Susan Sarandon, we had a lot of other potential alternatives, for many women were considered for the roles of Thelma and Louise — actresses such as Nicole Kidman, Jodie Foster and Meryl Streep. Not to mention that the role of J.D. (that eventually went to Brad Pitt) was originally brimming with steamy choices, stars such as: Alec/William Baldwin, Kevin Bacon, Sean Penn, Tom Cruise and Johnny Depp. Even the role of director was considered by 40 different people before being accepted by Ridley Scott upon the suggestion from Michelle Pfeiffer to be more than Thelma & Louise’s executive producer. 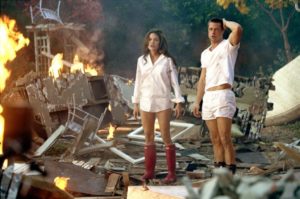 Glenwood Springs plays the home and match-maker of one of Hollywood’s most powerful couples, Brad Pitt and Angelina Jolie. Mr. & Mrs. Smith, whose starring roles joined the two love-birds together, ended up weeding out many options for the lead roles as well. In the end, this sexy, spy rom-com brought Brad and Angelina into our neighborhood…. In all honesty, it was probably our beautiful, mountainous state that inspired their love… who could doubt that?

Also on a road trip, are two light-hearted idiots hoping to return a case full of money to its rightful owner. This infamous film was shot all over Colorado, only not in the exact places they were hoping. One of the restaurant scenes, filmed in Ft. Morgan, was supposed to be shot in Wiggins.  The owner of the desired restaurant refused to allow filming in his establishment after reading over the script. Also, despite the fact that the ultimate destination of the two bumbling idiots was supposed to be in Aspen, the city asked for so much money that the Aspen scene actually ended up shooting in Breckenridge, not too far from there.

There it is Coloradans, a little piece of us for the whole world to see (whether they know it or not). Now you all have a little more to brag about…. Tell the world about the hottest Hollywood hits shot in your backyard!