X-Men – Days of Future Past REVIEW

Future, Past, Future Past

There have been flashbacks, flash-forwards, and now we flash sideways in X-Men – Days of Future Past. Audiences and X-Men fans have been awaiting this latest puzzle piece within the X-Men film series and results are in. The movie premiered Tuesday, May 20th, in Denver. However before it got underway, fans had a chance to win prizes in a costume contest. With only few to choose from, a Rogue and a Wolverine took the top prizes with a round of applause from the audience.

This movie, directed by Bryan Singer, known for his work on X-Men 2 along with X-Men – First Class, starts at a time shortly after X-Men – The Last Stand leaves off and then travels back to a couple of years after X-Men – First Class ends. In the present day, the world lives in a post-apocalyptic state. Mutants, along with anyone who will carry a mutant gene somewhere in their heritage, have been eliminated by “Sentinels,” machines that have the ability to detect mutant DNA, as well as adapt to their surroundings, making them a nightmare to the last surviving group. Their only hope is to send Logan (Hugh Jackman) back through time in order to convince Raven (Jennifer Lawrence) not to cause the event that marked the destruction for their species, in hopes of erasing all of the terrible events that have happened since then. It is important to keep in mind that Logan goes back in time to a couple of years after young Charles Xavier (James McAvoy) and Erik Lehnsherr (Michael Fassbender) had split teams at the end of X-Men – First Class. 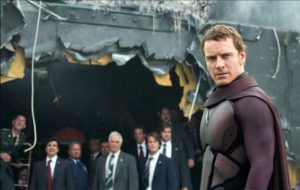 The movie returns with their familiar dynamic cast of Hugh Jackman, James McAvoy, Michael Fassbender, Jennifer Lawrence, Ellen Page, Patrick Stewart and Ian McKellan. Among the mix is a new face, Peter Dinklage, most recently known for his work as Tyrion Lannister on the hit HBO series Game of Thrones. He plays Dr. Trask, the man who is the mastermind behind the “Sentinels”. What audiences will see is the amazing chemistry amongst the cast. They are amazing actors and they have a way of working well with and off each other, especially the characters played by James McAvoy and Michael Fassbender. These two actors prove to be a great choice to play the complexities of the love/hate relationship between Xavier and Erik. Well-rounded and well-casted, audiences will love seeing the character roles set up in this film.

However, the best part of the movie was how fun it was to watch. With amazing special effects and graphics, audiences will find it it difficult to peel their eyes away from the screen. With a large special effects team within their crew, they highly succeeded in creating a realistic world where mutants with special powers exist.

The only criticism I have is for almost any movie that lasts a long length of time (which is most movies nowadays), is that they can’t help but have some slow bits. However, this one did a great job of picking back up and maintaining the audience’s attention.

It was highly entertaining to watch the thorough mix of drama, comedy and suspense, making it a great choice for all types of audiences to choose on a trip to the theater. Will they succeed in changing the destructive fate of their nation or will fate be the final say? Find out for yourselves. Also, STAY TUNED AFTER THE CREDITS for a clip that only true Marvel fans will understand.