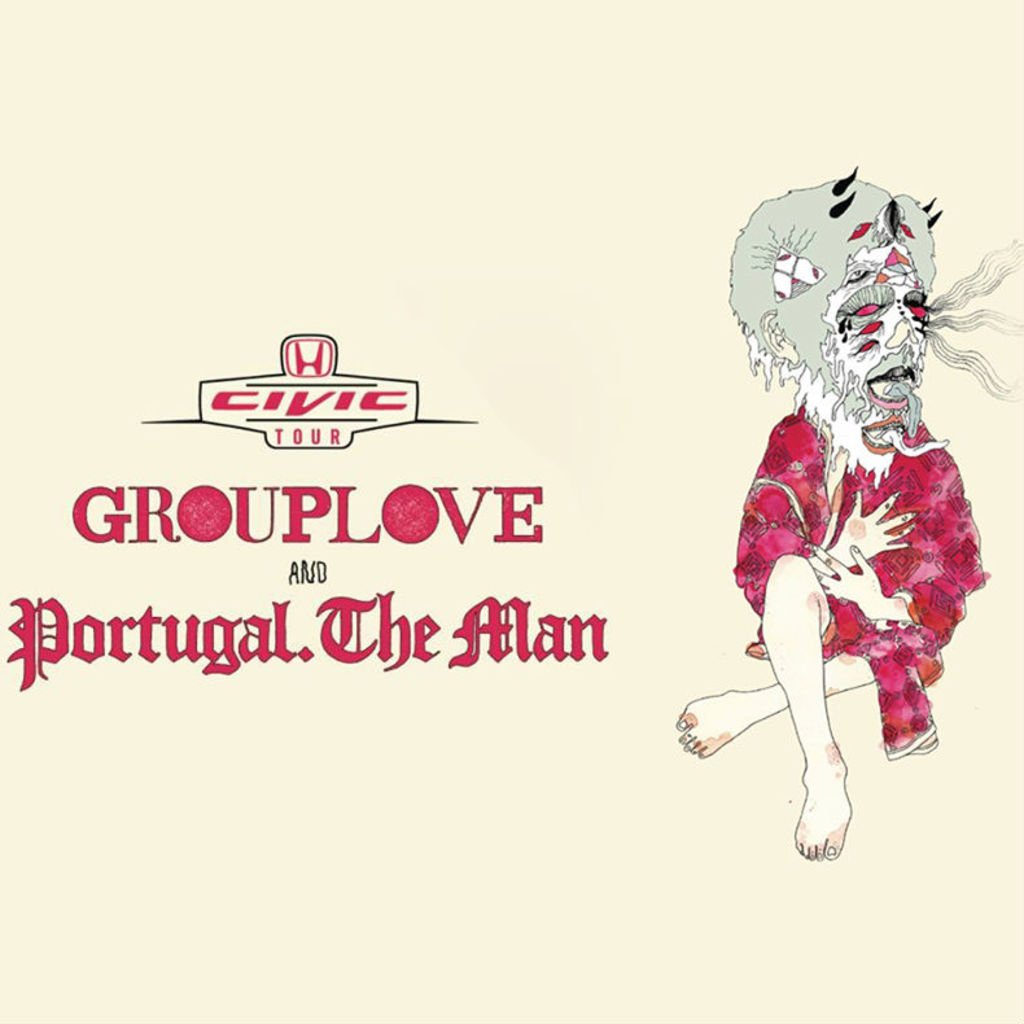 Grouplove and Portugal. The Man head to Red Rocks this Thursday, August 21st to co-headline on the Honda Civic Tour. While co-headlining can often seem like a power struggle, these bands are so diverse that fans will get to experience a little bit of everything and hopefully enjoy both bands’ styles. Accompanying both headliners will be opener STRFKR, an electronic quartet from Portland who have gained momentum recently with a release on the soundtrack to the movie The Fault in Our Stars. Expect unique vocals, dancey jams, ample costume changes and an all-out, feet-moving opening set.

LA-based indie band, Grouplove, favors a quirky take on modern pop music and will have fans moving and singing along to their upbeat brand of indie hits. Since their 2011 debut album, Never Trust a Happy Song, they’ve caught attention of fans and critics alike at festivals all over the world. The band dropped their first single off of their new album in 2013 and the infectious pop anthem played on loop and hit #2 on the Alternative Hits chart. This second album met a wave of high acclaim from NPR, Entertainment Weekly and even Rolling Stone. Now Grouplove will headline their first-ever Red Rocks show alongside alt-rockers Portugal. The Man. Their summer festival circuit gained some serious heat and the group is known to bring fans to their feet with energetic performance antics.

Portugal. The Man is part of a dying breed of purist rock musicians. While some may argue that the band–who have been around since 2006–added more heavy electronic elements to their 2013 release Evil Friends (produced by Brian Burton a.k.a. Danger Mouse) you can’t argue that Portugal’s scorching guitar riffs and John Gourley’s chilling falsetto bring their live game up eons beyond what they can produce in the studio. The band has a knack for mashing rock favorites like”Helter Skelter” and “Hey Jude” into their own tracks, creating something both innovative and reckless.

The Portland-based rockers are known for deviating from the norm and throwing caution to the wind– basically they do whatever the fuck they want. And they wanted to do a secret show in Denver. So they took to social media to post about this secret show and ask for fan input.

One fan pushed for an acoustic show to which the band replied:

Acoustic, ha. We want a party, not a drum circle!

So where, you may ask, is this secret Portugal. The Man show that’s bound to be one for the books? None other than RiNo’s charmer, Larimer Lounge. You can grab tickets today at 5pm for the show, which will be held Weds, August 20. These tickets are sure to sell out quickly, so grab yours ASAP. Portugal is one of the most sought after live performances today and to catch them in a venue this intimate will be legendary, to say the least.

If you didn’t get a ticket to Wednesday’s “secret show,” you can still catch Portugal alongside Grouplove at Red Rocks. Tickets here: http://www.axs.com/events/251678/grouplove-portugal-the-man-tickets