What You Didn’t Know About Denver Crime Scenes

After watching so many crime shows – NCIS, Criminal Minds, Dexter and Breaking Bad – you must think you are a genius about criminal behavior and crime scenes. But does Hollywood portray the reality of the crime scene, the way it actually is in Denver? 303 Magazine wanted to know who cleans up the messy scenes day in and day out.  After a little investigating, we found Nick Hodgdon, CEO of Crime Scene Cleaners in Denver, who sat down with us to reveal the raw and deadly details.

303 Magazine: What does your business do as a Crime Scene Cleaner?

Nick Hodgdon: We are a cleaning company that specializes in cleaning up homicides, suicides, unattended deaths. We come in after the body has been removed, and the police have done all the photographs. Sometimes police will hold a scene for a while, a week or two, or maybe up until the trial. Sometimes they will release it over to us and we will get the keys from the coroner’s office or we get permission from the family. We clean it up so the family can go in.

The family shouldn’t have to see the aftermath of their loved one.

Did you always work in Crime Scenes?

NH: I went to school in Arizona, studied business with an international emphasis, sailed around the world after graduation, then started work as a foreign correspondent in Europe. I thought I was going to be the next Hemingway, so I quit my job and moved to Spain. I tried to write a book. It turns out Hemingway and I have a lot in common but the writing and the talent wasn’t there.

So then how did you fall into this kind of work?

NH: I was working for a Telecom company doing sales when I knew I had to start something else. I thought, if I’m going to be working this hard, I need to be doing it for myself – not for someone else. So I started looking at different things I could do…

I always had an entrepreneurial spirit.

NH: My brother knew a guy in California that had started crime scene cleaners up – so I did some market research and saw that there wasn’t a real professional company doing it. I called up places like the police, asked for a list of people who did this, and I saw that there was a need for this.

How did you get the business started?

NH: First, I had to see if I could even do this.

Besides cleaning my fraternity house, I never really dealt with a whole lot.

NH: I went out to California and shadowed their cleaners. Then literally, flew back, bought a truck of chemicals and quit my job. I did everything on my own. I was doing all the marketing, hitting the pavement, talking to everybody I could. I was going around talking to funeral homes, coroner’s offices, and police departments everyday until I got a scene. 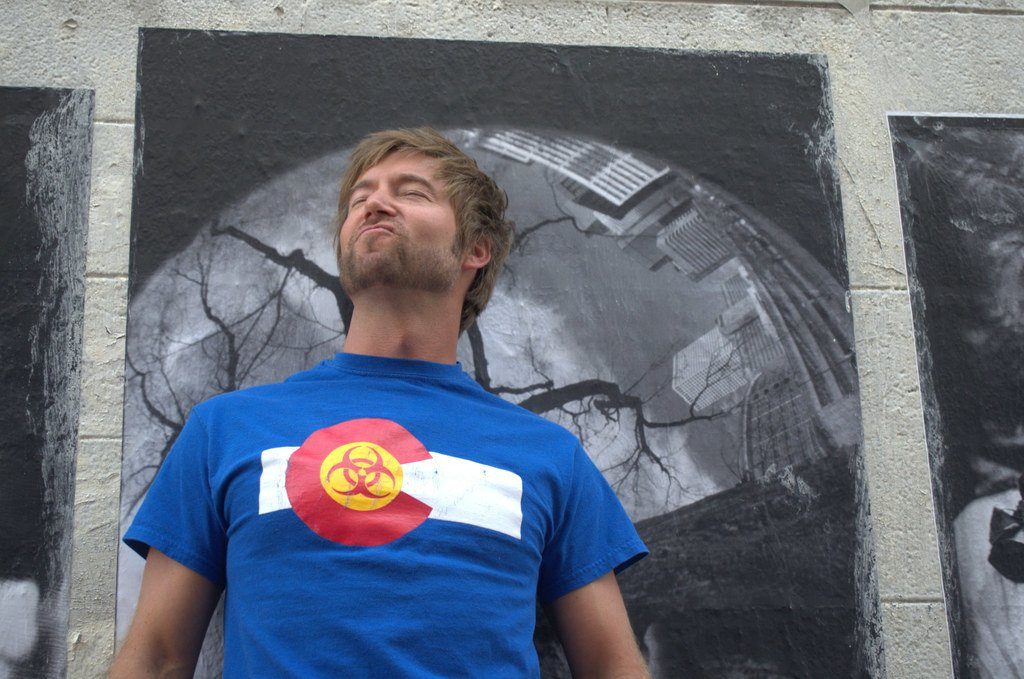 Hodgdon has the C encircling a biohazard symbol for his logo.

NH: The guy was still alive, an elderly gentleman in Golden, who slipped and bled all over his kitchen, literally puddles of blood. The family didn’t know what to do so they found me, I cleaned it up. I just figured it out. The family was totally grateful – they didn’t know who else to call.

Everyone assumes that the police will do it or the EMTs, but they don’t, and the loved ones shouldn’t have to do that. No one should have to see that as their last memory of their loved one.

How has Crime Scene Cleaners grown in the past 11 years?

NH: I’m still a small company. I only have two other cleaners, besides myself. It’s what separates me from huge companies. I can afford not to gauge the families, I don’t have huge overhead. I pay my guys really well, the fees are the transport and the disposal of all the stuff that we do tear out.

Was it hard to get people on board?

NH: Amazingly, I actually get calls and emails every week from people looking for a job. I have only hired a total of three cleaners because they stick around. They are paid well, compensated well, and it beats an office job.

Crime scenes are like snowflakes – no two are ever alike. Every time you walk into something, you’re walking into something different and unique.

What was your craziest scene?

NH: I’ve done some really crazy ones. Everything you’ve heard in the news for the past decade, I’ve cleaned up. One that really gets me was an adult male several years ago who was tortured before he was chopped up.

Do you ever bring work home?

NH: I don’t bring my work home with me. I do hate when kids are involved – that’s tough.

Has it been difficult to meet people at the bar?

NH: People are usually fascinated by it. Everyone says tell me a story and I’ve actually made some good friends through it. It’s a different thing. I’ve got a different lifestyle and a lot of stories. I clean up crime scenes – that’s what I do.

What do you want the people of Denver to know about this?

NH: We want people to know that we are a service out there to do this professionally and with integrity at an affordable price for families. Know that there is a company to respond 24/7. We give free estimates and assess the situation when we get there. We try not to remove everything, because often remediation isn’t necessary – complete remodeling isn’t necessary. Sometimes families spend 20 grand on something that would take 30 minutes to clean.

Any advice for the living?

NH: So many people think that it’s so hard to start their own company – but not really, you just do it. It sounds so cliche, but just do it.

“I lived on Ramen for years, but in the end it paid off.” -Nick Hodgdon, Crime Scene Cleaners

Now you know who to call when there’s a crime scene out of your control. The least romanticized, but the most exciting and absolutely important part of the job, belongs to Nick. To find out more about Crime Scene Cleaners and Hodgdon’s crucial work, check out their website.