The Ride Recap: Some Sexy Sitar, Post Cards from Hell & Howlin’ at the Moon

I’ll take literally any excuse to get down to Telluride. Sure, there are closer mountains to gawk at, climb on, and bask in their glory- but there is something about the looming peaks that encircle the charming town of Telluride that are… special. Their fat bellies and their snaggle-toothed summits tend to frame the sky in a way that makes you grateful to be alive. Plus the crashing waterfalls and the guzzling, frigid river that winds through town, combined with last weekend’s glowing and pregnant moon- ah!- just heavenly. So when I was awarded the opportunity to cover The Ride Festival, I loaded up the ol’ Subaru and hit the road (it’s a good thing that seven hour journey is so freakin’ scenic).

Thievery Corporation at The Ride Festival

If it had been only Thievery Corporation, who headlined the event on Saturday evening, it would’ve been enough. Honestly, those guys blow me away with their three-ringed circus of a spectacle every time I see them. Their newest album Saudade contains a lot more mellow, bossa nova type jams that oozed seductively, echoing off the surrounding landscape, much to the pleasure of the intimate crowd. I especially loved the rendition of their track “Depth of My Soul,” which was impossibly sexy under the twinkling mountain stars.

Thievery’s rotating cast of singers took the crowd on a journey, from bouncing and vibrant hip hop beats to sitar-centric jams that could’ve come from the dark and smoky opium dens of the Middle East. Then, in the end when the show was over and the lights came up, they rocked us with an encore that was equally as surprising as it was explosive. Those who had begun to gather their belongings, prematurely accepting that the music was over, tossed down their chairs and previously shed layers (for it was a warm night in the mountains) for one more fierce and final shimmy.

Check out Thievery Corporation’s newest album Saudade in its entirety here (“Depth of my Soul” is the last track, at about the 40 min mark):

Spoon had taken the stage prior to Thievery, during the ridiculously beautiful sunset. I’m not sure, in my semi annual visits to Telluride for Bluegrass and Blues & Brews, that I’ve ever seen such an impressive sunset- holy electric salmon and burnt tangerine, Batman! In my humble opinion, the Festival could’ve scheduled some more appropriate sunset music. The few songs of Spoon’s that I knew were well received, but it seemed that they were entirely too loud (which is not something that I ever usually complain about… am I getting old?) and their songs had abrupt endings without transitions in between. My partner in crime and I were curious as to who the Spoon fans out there were: what other music do they like? Are they mostly located in the band’s hometown of Austin? Where do they fall in the spectrum of music lovers? If anyone has any insight, let me know, as I’m still curious about it.

The Wood Brothers at The Ride

Another highlight for me was waking up to the Harlem Gospel Choir on Sunday morning. The sun was strong as a small crowd huddled around the stage to celebrate and receive praise from the sharp dressed New York chorus, who donned matching frocks and flashy jewelry. They clapped and swayed and had the audience singing and smiling along, especially the tiny contingent of googely-eyed babies on shoulders with giant headphones on. They sang everything from an acoustic version of “Amazing Grace” to Pharrell Williams’ “Happy.”

Later on Sunday afternoon, the Wood Brothers literally brought a tear to my eye with their set. Their music was just so damn beautiful, especially when they played their hit, “The Muse.” They started off slow and folky and ended up playing some good old fashioned, Southern rock and roll. Their song “Postcards from Hell” told a long winded tale, while the sweet ballad “Luckiest Man” pulled at your heart strings, and then they’d throw in funky tracks like “Honey Jar” to get the crowd shakin’. The evolution of their set was perfect, as they eased into it and ended strong and hard. Don’t miss them when they come back through town in a few weeks to open up for Railroad Earth with Greensky Bluegrass at Red Rocks on August 2.

“Times like these, so sweet and so true, thinkin’s the last thing that you oughta do…”

The Wood Brothers playing “Honey Jar” in the studio: 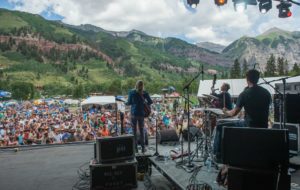 All in all, The Ride Festival seemed to be the redheaded step child of the Telluride festivals- but not in a bad way. Everything was peachy and shiny as usual, but it was certainly on the smaller side. Only about three hundred camping passes were sold, which made a cozy scene in the Town Park Campground.

The vendors held a lesser presence than usual, and there were fewer shenanigans and kid-friendly things (no stilt parades, no bouncing castles) inside the festival grounds. There were spare bike wheels and tires decorating the wooded area leading up the festival, but no LED glowing lily pads in the lakes. There were still slack lines and hula hoopers about, but that signature Festivarian silliness was slightly muted in comparison to the bigger, badder (better?) Telluride fests.

But like I said, any excuse to get to Telluride. The Ride Festival provided a great opportunity to soak up the Telluride magic in a laid back, mellow environment with great tunes and I’m looking forward to see what sort of Ride we’ll be taken on next year.

All Photos by Kirsten Cohen.