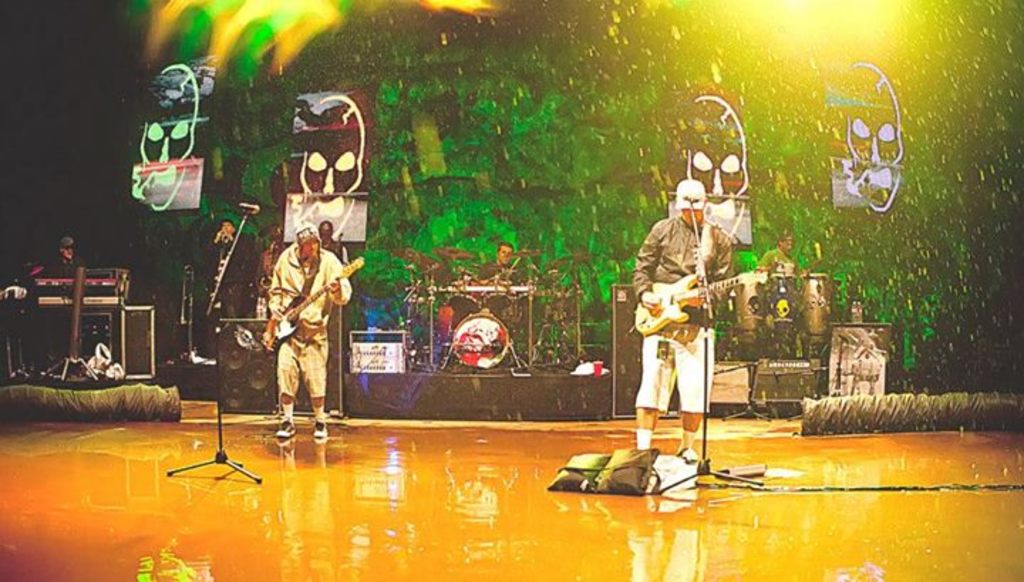 Slightly Stoopid have been on the reggae scene for years,  initially getting their start with the help of the late and legendary Bradley Nowell of Sublime. Sine then, their popularity has blossomed and thousands of fans have pushed them into the top spot of the So-Cal rock-reggae genre.

Slightly Stoopid tours heavily, frequently coming back and forth to Colorado to spread their feel-good vibes with the people of the great Rocky Mountain State. This Fourth of July, they will be playing the headlining set down at South Park Music and Camping Festival, which takes place July 3-5.

Slightly Stoopid will be touring all over the United States on their Summer Sessions tour, which includes support from Stephen Marley, NOFX, G.Love and the Special Sauce, Cypress Hill, and Fishbone.

303’s Music Desk had a chance to speak with Ryan Moran, also known as the one-name moniker RyMo, drummer of Slightly Stoopid, about their headlining spot at the festival this weekend, their plans for the year, and what it is like recording with Slightly Stoopid in their studio.

303: What is daily life like touring with Slightly Stoopid this summer?

RyMo: It is pretty fun. Summer tours, with the weather being nice, it is really all about having a good time. We’ve got work out gear, skateboards, bikes, frisbees and everything you would really need. So by day, the band guys are kind of resting and kicking back while the crew guys are hard at work getting the stage and sound set up. Of course once the show starts, that is our primary focus and we have to be ready for that.

The traveling aspect is really rigorous though. People think with music, is it all hot tubs, champagne and the rap-video lifestyle, but it is actually not like that at all. We are traveling all the time. We are in airports way too much, and pretty much always moving – taxis, boats, trains, planes and buses. It is pretty much being in a different city every day for two months, so it leaves you with a little bit of a head-spin. We love what we do, but there is definitely a hard work element with all the fast-paced traveling.

303: Slightly Stoopid’s tour this year is called Summer Sessions. You guys are doing some of the shows with fellow South Park band Fishbone. What is it like playing with a band who seems to have had so much influence on your group?

They’ve been a huge influence. My sister gave me a Fishbone cassette that came out in 1988 when I was like twelve years old, and it totally changed my year. Up to that point, I had listened to a lot of rock and I loved that and knew I was way into music, but when I heard Fishbone I was like, “this is something way different than what I have heard before.” It is everything – ska, rock, fusion. Now here we are so many years later, and we have the same management and are friends with them. So for us to be able to tour with them, it is such an honor since they influenced us in so many ways. We respect them so much. We have had Angelo Moore sing on some records we’ve released in the past and you know, I just can’t say enough good things about them.

303: You guys are headlining the South Park festival on Friday, what drew you guys to want to play at it?

It is going to be our first time there. Sometimes just trip out and pinch ourselves thinking about how we get to play after all of these other amazing bands. There are so many bands playing that we grew up idolizing or have toured with before. At this point, as strange as it is, on the business side of music, the festival owners want to sell tickets and we are a point where we can fortunately sell a lot of tickets and come in to headline these shows. But we are still blown away at that. Playing at a headlining position, it can be almost intimidating. That being said, we have worked so hard to get where we are at. But we have done tons and tons of shows in Colorado and it is kind of our second home. Colorado has always been really accepting of Slightly Stoopid, so we are lucky the organizers wanted us to be a part of this festival.

303: You said Colorado is like your second home. What do you think it is about the energy or the fans here that draws you guys back so often?

There is a lot of similarities, in my opinion, between the mountains and the coast. Anywhere that you have people who are into extreme sports – surfing, skating, skiing, or in the summer, rock climbing, kayaking, you have this kind of lifestyle that people really enjoy their environment and want to be outside. So in a lot of ways, California parallels Colorado because that people are out doing stuff all the time. The music that we play is all about being out doing stuff with your friends, and throwing back a few beers.

We are not trying to make a grand political statement, we are about playing music and having a good time, and where you have people out being active they vibe with that. We are just out here trying to enjoy music and life and that is what it is all about.

303: Do you guys have any special plans or surprises for the headlining set?

303: You mentioned new material, have you guys been in the studio lately? Any big plans for the coming months?

We have been working a lot in between touring and we have our own studio here in San Diego. Touring is basically how we pay our bills, it is like our bread and butter, so the majority of the year we are on the road. We have been working on a lot of new material though, so were looking to get something released by the end of this year or first thing next year.  We are always working on something, whether were at home trying to record, or if were touring we are obviously putting everything into the shows. We try to always stay active in one way or another.

303: What is a glimpse of how you guys work together to cultivate new music as a group?

There is a lot of different approaches we use. Nowadays, we have our own studio, so that has given us a ton more flexibility. Back in the day we had to rent it out, so we would go in the studio and have to record, then listen, then re-record again, all in the same day. Now with our own space, we can diversify it a little bit. Some days there are two of us in there working, some days all of us are there, some days just one. Not having everyone there can have its own influence on creativity and how things flow, because there is no time constraint. Before you would be paying almost a thousand dollars a day to be in a recording studio, so you had to make that time count and there was a lot more pressure. Our own space has been really beneficial to us in writing in smaller groups and letting everyone contribute in their own way and have this cool piece of music that evolved over time, instead of trying to force it all to come together in one instance.

Music is sort of an evolutionary process where you can record it, and in a week want to trash it and think it sucks. Or you can record it and come back to it, think it is awesome and want to add to it and have a new inspiration. It can be a collection of inspirations over time versus basically a snapshot of that one moment of one day where everyone is in a certain mind frame. When you allow it to breathe a little it can really develop its own shape.

303: Well lastly, what are you most excited for for this weekend up in South Park?

We will be there all day to check out the shows. I’m definitely excited to check out Steel Pulse, they are my all-time favorite reggae band. Really for us at festivals, it is like hanging with your friends and seeing bands you tour with or want to tour with, and getting time to say hi and hang out with everyone.

See more of 303’s coverage of Slightly Stoopid by checking out our gallery of their 2012 Red Rocks show.