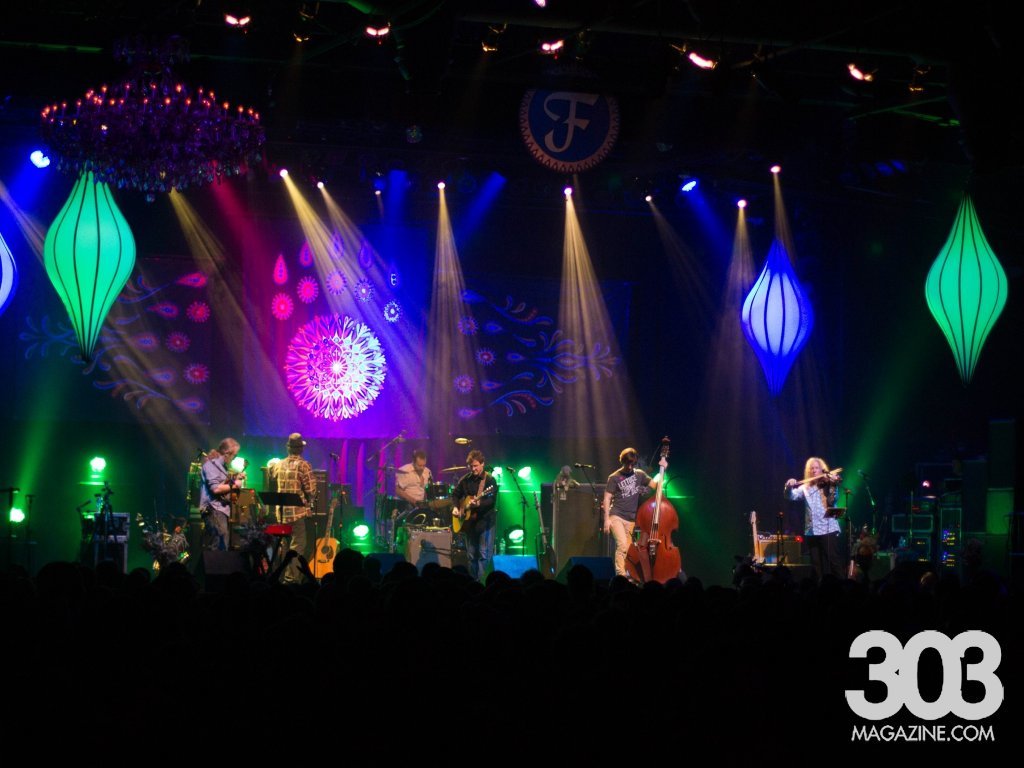 All aboard: Railroad Earth is back in town. This weekend’s back-to-back Railroad Earth extravaganza kicks off in Boulder at the Boulder Theater on Friday evening and rolls right into the Red Rocks station Saturday for a wholesome and whole hearted bluegrass hoedown, featuring the Wood Brothers and Greensky Bluegrass as opening bands. Two-day passes run about $80.50 and exclusive three-day passes are also now available that include Sunday’s Greensky Bluegrass show at the Fox Theater for about $107.50. Friday’s Boulder Theater show starts at 9pm and the Red Rocks show on Saturday begins at 6:30pm.

303 Magazine had a chance to catch up with RRE’s mandolinist (and pianist) John Skehan to talk about their recent album, Last of the Outlaws, which was just released in January. Read on below to hear about RRE’s New Jersey roots, the curious acquisition of Skehan’s new piano, RRE’s upcoming Hangtown Halloween Ball festival in October, and the deep thought and ingenuity that went into putting together Last of the Outlaws.

Last of the Outlaws is available for purchase and download here. 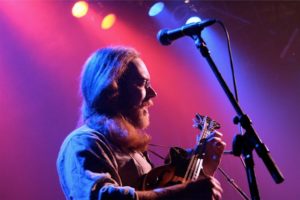 303: Tell me about the recording process of “Last of the Outlaws,” which took place at a house in New Jersey that you happened to visit while responding to a for sale ad about a piano. What a random occurrence.

John Skehan: Yeah, I guess you’d say it’s in Delaware County, near the border between NJ and PA. It was a very random thing, hearing through a friend about this guy who’s a musician who has a studio in their basement. I thought, “Big deal, everyone’s got a studio in their basement.” Upon going to look at the piano- very hesitantly, because I knew I’d probably want it- he had a full-blown, very professionally studio set up in his house.

It took a while, you know, it was many months before we even considered recording another album. And I dragged my heels about calling him back about the piano. But the studio had seemed big enough for all of us to simultaneously play together and fit in there and it just happened to work out. It turned out to be a really comfortable environment.

John Skehan: That’s part of the punch line. By the time we got there and were recording, I’d procrastinated deciding about buying the piano for so long. But then we used the piano so much on the album and we were joking the whole time about buying it. Then we got to the end when we wouldn’t be tracking anymore, and I’d already taken measurements in my living room for the piano and he decided not to sell it to me after all. He wanted to keep it. Some more time went by. It took about a year between when we finished tracking and found the right mixer to finish things up. So a lot of time went by, and then some more time. I was still poking around on Craigslist and found another listing with what sounded like a familiar address. So I reached out to him and it was the same guy… and now it’s my living room. I bought it about a month ago.

303: Well, congratulations on your new piano.

303: Are you guys all from New Jersey? I grew up in South Jersey, and every time I listen to “Donkey for Sale,” it makes me smile. There aren’t enough (non Bruce Springsteen) songs about New Jersey.

John Skehan: (laughs) You make a good point there. I guess he sorta has the market cornered there. Yes, I’m in Stillwater right now. We’re all taking a couple of days off at home after finishing up our recent tour with Yonder Mountain String Band and before heading to the Northwest String Summit. 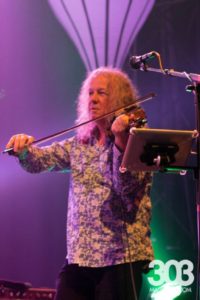 303: A good friend of mine used to work at a bar in Philly while you guys happened to be recording an album in the basement of the building. I’ll never forget when she called me up to ask if I’d heard of Railroad Earth and telling me how she met you guys one night.

John Skehan: Okay, I remember that exactly. We were actually producing the record, we weren’t recording. That was the Amen Corner album. We had recorded that at this other guy’s house, but we mixed it at a studio in Philadelphia. I do remember ending up in that bar a couple of times. And one young lady even brought us drinks down in the studio.

303: On “Last of the Outlaws,” you play a lot of piano, which you had studied at Susquehanna University. But you normally play the mandolin with Railroad Earth. Tell me a bit about your experience switching up instruments and “returning to your roots,” so to speak. Will you be doing more piano playing in the future with RRE?

John Skehan: I studied as much as I could. I was certainly never a wiz kid or a concert level pianist. I studied jazz harmony and everything along the way, as well. I started pretty late in life, so you know, that explains the not stepping onto the concert stage or anything. But I had my hands in just about everything I could. Then I really got hooked on the mandolin, which took me down a wonderful and winding path for many years. I never do anything really piano-wise in the studio setting. We’ve been playing the new album material with the piano on stage and ventured into a couple pieces of the older repertoire. Everybody in the band plays multiple instruments, especially Andy, who plays literally everything. Flute, recorder, saxophones- and all very, very well. The guideline has always been “What does the song want to sound like? What instruments does it want?”

303: Your recent press bio describes “Last of the Outlaws” as Railroad Earth’s most experimental and adventurous album to date. Elaborate on that statement a bit.

John Skehan: Well, in some ways a lot of it was returning to a studio environment where we could all be set up and playing at the same time and recording as we went.

We had a lot of fun, free wheeling days where we could do whatever we want, trying whatever came along. We recorded it all and digested it over time and got to see what would take shape as a record.

I think one of the things that, I guess, points people to that notion is toying with the idea of doing a long, multi-movement piece. Some composed, some improvised and ended and framed by some songs… it took a lot of experimentation. In the end, we figured, “I guess this could work, even though it’s twenty two minutes of music that’s different than anything we’ve done before.” It’s a bit of a reflection of some of the chances we’ve taken live: weaving old songs together with something we came up with just that day during sound check, etc. Can we put something together that’s about half of a live set? It was about shifting the moods and the movements of the music. 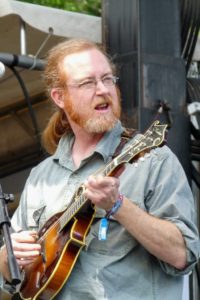 303: Railroad Earth has mentioned that “Last of the Outlaws” has a lot of underlying themes of death and rebirth and compared it to a “requiem mass.” Where did the inspiration behind this album come from and how did it evolve into the final product?

John Skehan: Well, that refers to the long piece that I was referring to. “All That’s Dead May Live Again” and the bookend is called “Face With a Hole.” I forget how many movements there are all together, but there’s several in between. The inspiration towards the requiem mass starts with me being really, really bad at naming the instrumental things that I write (laughs). They usually get named with numbers and then I’m faced with the conundrum of how to name these things. How do you give a title that doesn’t distract from the programmatic material of the piece? To give those in-between musical movements other programmed names, I was afraid we’d kind of take away from or be a distraction to make people wonder “why,” to distract from the other lyrical text that was there.

And within that, I heard Todd’s song “All That’s Dead” as sort of a prayer, searching for how to cope with a tragic event. You know, a sudden unexpected loss or anything like that. It very much seems to reflect on how people come together to cope with such an event, like we unfortunately see too often these days. “Face With a Hole” is about the world coming apart and, without lyrically being too specific, points to a horrific sort of event. This all led me to think of a requiem mass, which is meant to be sung. A choral representation of the mass. As I went through the text of some of those and compared them to the instrumental versions in between, some if the text rang true.

I had to run my idea by everyone else because it’s pretty nerdy and kind of a stretch, but it worked. And for anyone who is interested, they might look into it and hopefully find out and find some relevance. Everyone else will go, “That’s just some Latin nonsense.”

303: Let’s talk a bit about Railroad Earth’s October festival in California, the Hangtown Halloween Ball. I’ve heard great things about it and plan on attending this year. What can I expect?

John Skehan: Well, it’s definitely a more intimate festival. You know, people do get into the Halloween spirit, as we do. We’ve had a tradition each year to play a partially written and a partially improvised set for a silent film. I think we’ll do a collaborative set on Friday night instead of the movie this year. It’s a great little setting, a great little fairgrounds. A lot of people come together to put together a lot of Halloween themed installations and art.

Someone recently described it to me as enjoying the mellower environment and referred to it as “High Sierra’s younger, hotter sister.” It’s got that laid back, Northern California vibe.

303: I’m thrilled to be attending your upcoming Red Rocks show with Greensky Bluegrass and the Wood Brothers. Did you guys personally pick the opening bands for this show? What a spectacular bill.

John Skehan: Well, it’s in our hands and out of our hands, like many things. We’ve had a long and strong relationship with the Greensky boys. We go way back and it’s great to be able to share such an awesome event with them. We’ve been hoping to get together with the Wood Brothers for a long time, too. We were lucky to have that come together. And we were with Greensky last year at Red Rocks, too. When we played last year, they (Greensky) recalled it was the exact date- 8 to 10 years to the date- that we had met them. It was nice to be able to share that serendipitous moment with them there.

303: What does Railroad Earth have in store for the rest of the summer?

John Skehan: Well, a few more festivals. I think we’ll be reconnecting with our friends in Yonder at Harvest Fest in October. As you said, the record is still new- but not terribly new. But it still feels like a new wave for the music, now that we’re in the festival season. To be able to present it outdoors in a full-length show has been a lot of fun. And we’re still bringing that new stuff from the album to a lot of new people and new faces every time we hit a festival.