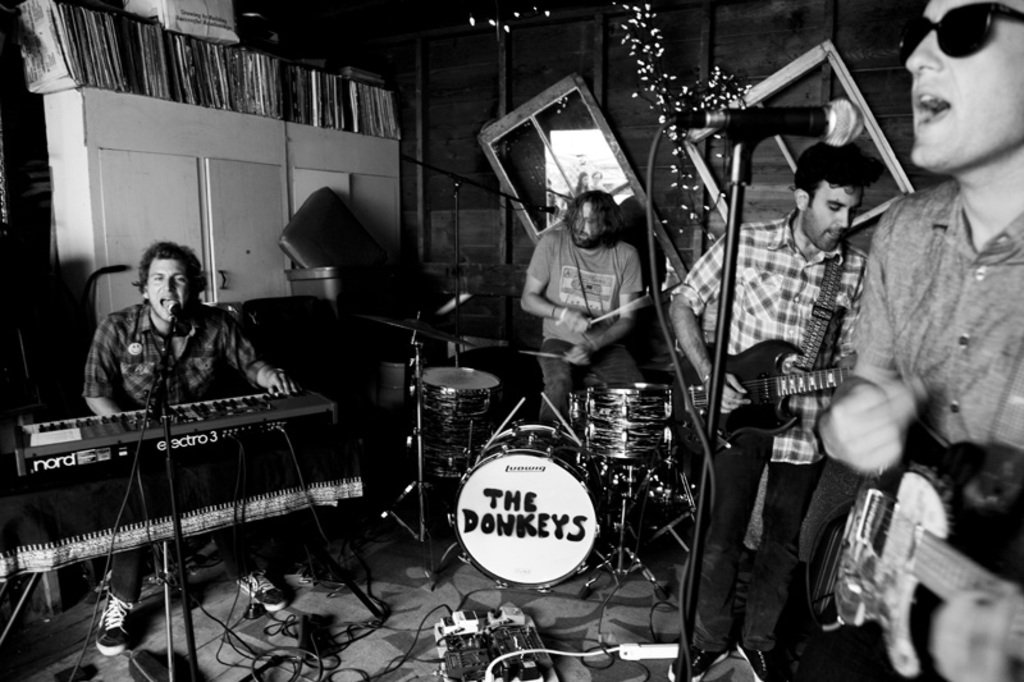 Q&A with Anthony Lukens of The Donkeys: California Sounds and Late-night Jams

Sometimes music chooses to simply be. It is not manifested as a way to thrust an agenda, or push forward an avant-garde envelope. Rather, the music is created simply through friendship, fun and positivity. It is the music that chooses to be an oasis away from the inherent stress that we all reckon with at times.

The Donkeys, a San Diego rock band consisting of Tim DeNardo, Jessie Gulati, Anthony Lukens, and Sam Sprague, resides within this niche. Their sound is more reminiscent of the misty orange sunset after a perfect afternoon, and designed to go perfect with that cold beer in your hand. Appropriate then, that The Donkeys are coming into Denver in the midst of one of our warmest weeks so far. 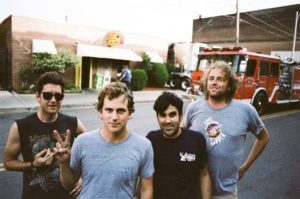 All Photos by Wes Frazer

The Donkeys are playing tonight at the Hi-Dive Denver, with Jason Moorehead and the Guestlist, as well as Forces at Work, for ten dollars at the door. As with most events at the Hi-Dive, it is a 21+ show.

303 Magazine’s Music Desk spoke with Anthony Lukens regarding the band’s history, their recent label change, and what can be found on their newly released album.

303: What is the story behind how the Donkeys came to be as a band?

So at one point, one of our other bands had a show in San Francisco that we couldn’t make, meanwhile The Donkeys, we didn’t necessarily have a name yet, but we were jamming all the time and had a bunch of songs but we never intended on playing anything official. We were just having fun until this show in San Francisco came up that seemed like a fun excuse to play out, you know? So that is how The Donkeys started pretty much, we decided to take that show for my other band and pretty much call it The Donkeys, and sure enough here we are.

All Photos by Wes Frazer

303: How then did you all decide on The Donkey as a fitting name?

Well Sam was working graveyard shifts at Denny’s at this point, so we were always keeping really weird hours. Like you would get the call at midnight or 11 p.m. saying, “Do you want to go jam?” So ‘donkeys’ was like the code name we would use. We would call and be like “Donkeys do it!” So it was pretty much whoever could jam, was kind of in ‘The Donkeys’ at this point. It was basically our code name for staying up all night and getting wasted and making music at 4 in the morning. It wasn’t ever actually intended to be a band name, but it became one.

303: So you guys recently switched labels from Dead Ocean to Easy Sound, how is the change working out for the group?

So far so good, it has been super fun. It is mostly cool because the bands are all like-minded bands. It is fun be fans of all the other bands, and sort of have been friends with everyone before all of these bands really even formed. Before we label-mates, we were already buddies with most of them and were playing shows together, stuff like that. So it is cool to feel like we are more with our peers, and a little more communal. But it is still really fresh you know, they could be total ass-holes… But no, no, it is really great.

All Photos by Wez Frazer

303: You can definitely hear a surf rock, California influenced vibes in your songs. Has that influence always been a part of the group’s sound?

The Donkey’s is rock and roll at the core. The thing I think people latch onto is that we all grew up on the same radio stations basically. We can all trace our childhood back to stations like KS 101, and listening to that in the car, and all of the LA oldies. So we all knew the Beach Boys songs by heart before we even started collecting records, just because they were on the radio so often.

Or like certain movies that maybe didn’t hit other parts of the country like they did our neck of the woods, like Endless Summer, were huge for us and our creative life. And even though not all of us surf, we all grew up at Dana Point and can recognize a Hobie surfboard. I think all of us can trace back being little kids and seeing that stuff every. But we all just think of ourselves as a rock and roll band that tries to mix it up as much as possible and keep it fresh.

303: You guys just finished up a new album, Ride the Black Wave. What is a preview of what can be found on this new recording?

Well, we definitely made a conscious effort to make it a California record this time around. That was really fun, so once we got that in, we saw that all the songs kept having this theme about the ocean. There is a total surf guitar song on there that just kind of happened organically, and it felt like it fit to do that.

So there is definitely a lot of ocean themes and beach themes, but it is not all light and fluffy. We got a little dark on there, cause there is sort of this idea that California music is all sunshine and sun tan lotion and bikinis, so we were a bit darker which is a little more honest. We were really just putting our best songs forward and had the chance to be in a really cool studio and put together a really cool record.