Everyone’s favorite Nederland sweethearts, Elephant Revival, will- at long last!– be taking the stage at Red Rocks this week to open for DeVotchKa with The Colorado Symphony. Gregory Alan Isakov, who currently resides in Colorado (however, he was born in South Africa and raised in Philly) will also be taking the stage for an opening set. An evening sure to be filled with homegrown Colorado jams will take place this Thursday July 17, with the doors opening at 6pm and show starting at 7:30pm. General admission tickets are about $30 and still on sale to the public.

303 Magazine had a chance to catch up with Daniel Rodriguez, who plays guitar, banjo, and sings in Elephant Revival. Read on to learn more about the band’s beginnings in Nederland, their song writing process, their dedication to saving the environment to the best of their abilities, and their summertime adventure plans.

(Note: This interview was conducted a few months ago and the “summer time” was used in the “future tense,” so some of the festivals mentioned may have already taken place.)

303: Gypsy, alt-country, Celtic, transcendental folk, bluegrass, jazz, African- is there any genre that Elephant Revival doesn’t encompass? Which sort of music is your personal favorite to play? How did you guys perfect your signature sound that incorporates so many various elements and influences from the musical spectrum?

Daniel: It’s tough to really say one type of music that I like to play, because the style that we have comes from all of our own upbringings in the music world. Five people with completely different outcroppings and influences were all coming together to listen to each other and come up with parts. I think that’s really where the uniqueness comes from.

There are just so many different influences, so it makes sense that there isn’t really one genre that we fit into. You can tell all of the different specific genres that we’re pulling from. Sort of sound like this, but it isn’t really… what is it? It’s sort of nice that we’re creating a whole new sound. The genre is really for the music stores, anyway. In that sense, it kind of lessens what we’re doing.

303: Tell me a bit about how you guys all got together to establish the “Elephant Revival Concept” in 2006 and how you think you’ve grown as a band over the last 8 years, with four albums under your belt.

Daniel: We all were sort of in the vagabond stage of our lives. We had played music with each other and crossed paths at different festivals. At the time, I was personally living in my truck and bouncing between Oklahoma and Colorado- Oklahoma being where Bonnie is from. So we all just congregated up in Nederland and were all just trying to find homes and things, and Dango, our bass player, he just started booking shows under the name “Elephant Revival Concept.”

He called us up and was like “Hey, whoever wants to show up, I’ve gotta gig and a name for the band.”

The five of us kept showing up, then we started playing New Mexico, Utah, Kansas. Thanks to Dango, he had the most experience in the traveling music world at the time, so he was our manager and booking agent from the beginning. We just started out of those homegrown jams in Nederland.

303: Almost all of the band members in Elephant Revival are multi-instrumentalists- washboard, djembe, saw, banjo, fiddle, mandolin, viola, various guitars, double bass- which is your favorite to play?

Daniel: I kinda like all the instruments that I play on stage, but I find it fun and somewhat relieving when I get to play the upright bass. I seldom do get to play the bass, but when I do get the opportunity, I love it.

303: Of all the instruments, I must say that Miss Bonnie Paine’s voice is what surely sets Elephant Revival’s sound apart from any other band. I love how when she has those vocalist solos, the venue falls dead silent. Her voice commands such attention.

303: I have to admit that after I first witnessed Elephant Revival open up for Railroad Earth several years ago during their New Year’s Eve shows, I totally fell in love with you guys. I even bought a washboard because I was so inspired by Bonnie- but as it turns out, washboards don’t really sound too good when you’re just playing alone. You really need the support of a whole band.

Speaking of support, all of the band members in Elephant Revival take part in song writing and composing music. What sort of process do you guys go through to include everyone’s ideas and input?

Daniel: Dango’s written a song for Bonnie to sing, Bonnie and I have written songs together, etc. It gets written by someone in the band, you bring it to the band and say, “Hey, this is what I’ve got. Does it fit in with what we’re going for?” Then if everyone likes it, we’ll run the tune a couple times and people will start developing parts. The person who wrote it can then elaborate on what they had in mind for each person. There’s a lot of back and forth.

The songs tend to chisel themselves out over time. The more we play the songs live, the more we figure it out. That’s basically the process.

303: Summer is right around the corner and you guys will be playing at Red Rocks with DeVotchKa and the Colorado Symphony in July. Will this be your first time performing at the Red Rocks? How do you guys feel about that?

Daniel: This will be our first show at Red Rocks. It’s terribly exciting!

303: What are you guys looking forward the most this summer? Can we expect to see any exciting collaborations, (hopefully) gigs up at State Bridge, or other local festival performances?

Daniel: We’re doing “Campout for the Cause,” at Rio del Rancho. It’s run by the same guys who did Winter Wonder Grass. We’re doing a lot of stuff in Canada this summer. We’re flying up there like seven times for all different festivals. We’re flying up to Alaska for the first time. Folk Fest in Lyons with Ani DiFranco and Dispatch. Of course, Red Rocks is the highlight of the whole summer. We’re doing Meadowgrass Festival in Colorado Springs on May 24. We’re playing the same day as our friend Chad Stokes from Dispatch, so we’ll probably try to work something out with him. Then on May 25, is Camp Out for the Cause.

303: Elephant Revival strives to maintain a platform of environmental consciousness, working along side of nonprofits that support humanitarian issues. Your band is even named after a specific incident involving a pair of pachyderms who were separated in different zoos and then who died on the same exact day. Tell me a bit about your stance on taking on some responsibility for our rights from a public persona and your band’s dedication to promoting positive causes. 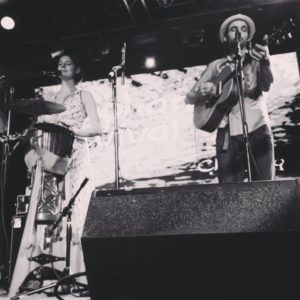 Daniel: We used to invite local farmers out who are growing consciously and have them set up a booth and a table, to get people to support local food. Another thing that we do sometimes- in the past, anyway- we’ve thrown a few local benefits called “Buffalo Heart Project” and we raise money for the Souix Reservation for their heritage program to maintain the Native traditions. Campout for the Cause, we try to play every year and it’s a different cause every year. The last one that happened occurred right around the tsunami that happened. It’s nice and keeps it fresh that it’s always a different cause.

We’re always looking for things we can put our energy into because there’s a lot of work to be done in the world.

Dango was busking outside of the Elephant Cage at the Lincoln Park Zoo, so he was a firsthand observer of all of this happening. One day there’s two elephants, the next day there’s one. Then, of course, the story unfolds that the one they transported out to Salt Lake City died and then the other one died shortly thereafter.

That’s sort of the mission statement of our band: no matter what any band does, whether they realize it or not, is that they go out into the community and bring people together. No matter how isolated you are in your life, the band brings you together. The idea of isolation tears us apart.

303: I had a bit of difficulty coming up with questions for this interview, because I mostly just wanted to gush about how much I absolutely adore your band. For me, Elephant Revival simply embodies all that is magical and good about the state of Colorado. The mountains, the rivers, the air, the sky- your music feels like it comes from the earth. From someplace deeper than we can see.

There are a few bands out there- and you guys are one of them- that truly make magic happen. Your whimsical and nostalgic lyrics combined with your sweet, blissful music and your down-home stage presence- damn. For being such a young band, it feels like you all have old, wise souls. Your music creates an energy within the audience that is extremely powerful. Thank you for that.

303: What can we expect from Elephant Revival in the near future? Any big plans on the horizon?

Daniel: Not only Canada, but we went to the UK and Ireland for the first time during the winter, so we’re gonna keep going out there and play more of Europe. We just want to expand our horizons in a general sense and try to get the music out there to as many people as possible. We feel good about it. We’re all always writing songs and playing together so you can expect a lot more albums from us. Yeah, we just want to keep it up and keep inspiring and being inspired. Keep that circle going.