I combed my hair and put on lip gloss. Sure, it’s just a phone interview, but it’s also a phone interview with one of the most desirable men on the planet—Dave Macklovich of Chromeo. My palms were sweaty and my throat was dry. When you’ve got the opportunity to interview Chromeo, you pull out all the stops. Dave was everything you would imagine from his mysterious sunglassed facade to his taut, leather-clad body–all cool, rock star confidence. He spoke with the highbrow sophistication of a college professor (Dave is a PhD candidate at Columbia and also taught French classes at Barnard College) and the casual jargon of a rap artist who stays current in all the hip ways.

Dave Macklovich and Patrick Gemayel grew up together in Canada along with Macklovich’s brother, producer A-Trak, who’s also made quite a name for himself in the EDM scene. In 2002 Dave 1 and P-Thugg (the musical aliases they would thenceforth answer to) formed Chromeo, a duo whose nostalgic dance hits dare you to keep your hips from shaking, your toes from tapping and your mind from imploding with the massive amounts sexiness.  While the self-proclaimed “funkateers” make music with enough happiness, love, power and peace to perhaps one day end all conflict between Israel and Palestine, the men are completely modest about their dance jams currently topping the charts and gaining them some well-deserved recognition.

Go ahead and tell them every woman wants to bed them and every man wants to be them, they will laugh humbly and drive the conversation back to their music, which is just as desirable. But though their music derives sounds and styles from other time periods, it’s nothing if not innovative. The men themselves don’t live in a cloud of nostalgia, but rather weave their favorite elements of retro music alongside threads of futurism. Dave 1 loves hip-hop and P-Thugg’s streetwear is nothing to trifle with and  their music takes as many cues from Snoop Dogg as it does from James Brown.

On August 5th, Chromeo will headline Red Rocks Amphitheatre, accompanied by Flume, Duke Dumont and Cut Copy—three artists that could easily sell out a venue on their own. This festival of sorts will bring enough funky grooves through those sandy red stones to crumble all your worries and sweep away your pain with sultry guitar and sexy keyboard. So, yes, when one gets the opportunity to talk to one of the coolest people on the planet, one should always put on lip gloss.

303 Magazine: You guys released White Women–your most ambitious album yet–earlier this year and it’s been kind of a huge propeller to popularity for you guys, how has this experience been compared to your other album releases?

Dave 1: Really positive. I mean, we worked way harder on this record than previous releases and we wanted to show fans, critics and skeptics even that as a band we could improve and push things even further than we had before. From the day the album came out and debuted #1 on iTunes to now when we’re basically for the first time in our career playing Top 40 radio,  it’s been an extremely gratifying and even rejuvenating experience.

What are you guys most excited for about headlining Red Rocks?

I think beyond the fact that, you know, we’re playing such a historic venue for the first time, I think that the bill we put together is really exciting to us because theyre all artists that we love. I’ve known Duke Dumont for a long time, since like 2007 or 2008, we’ve known Cut Copy since our first album and they were the first band we’d ever remixed. I don’t know Flume, but we’re huge fans of his music, of course. So it almost feels as if we’re curating our own mini-festival. 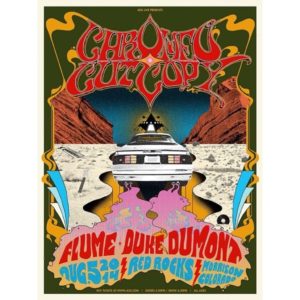 It’s definitely one of the most talked-about shows of the entire year and that’s a huge thing since it’s Red Rocks and we get some really incredible acts every year.

And it’s great you tell me that because I’m not over there so I’m not privy to the chatter about the show. So I’m really happy to know people are excited.

I mean from the beginning when the bill was announced it really sparked a lot of excitement and, in my opinion, it will certainly be one of the best—if not the best—show of the year.

Awesome. Thanks, I mean, that’s why we wanted it to be its own thing, you know. We filled the ticket with a bunch of great artists, many of whom we knew previously. We designed that old kind of Grateful Dead-looking poster and we’re going have those for sale at the show.

Oh yeah, I want one of those. They’re sweet.

Exactly. We really wanted to make it not just about Chromeo but about a number of really talented artists. I mean, I don’t even feel like we’re headlining. I think of it way more as a mini-festival of talented artists, rather than a bunch openers with Chromeo headlining. We’re playing last but Flume and Cut Copy alone could sell a huge amount of tickets.

Both of them easily pack a house. This show is going to be huge. How has the resurgence of retro dance music influence you guys as a band? I mean, you’ve been around for a decade, making this type of music and now it’s really making a comeback into popularity, so how does that affect Chromeo?

You know I think it just sort of opens more people’s minds to the kind of stuff that, like you said, we’ve been doing since the beginning of the band. And we could easily say “we’ve been doing this all along” but we haven’t been doing this as well all along. I think that a lot of other artists doing this type of music motivates us to improve. It helps for two reasons: it helps to open people’s ears to a different sound. And it’s always more stimulating and motivating when other people make similar music or have similar influences because then it pushes P and I to get even better.

Getting better is the most important thing.

And the main premise of your music is all about empowering women and treating women right, how did this theme come about? Was it a young experience in your love life or did you just decide that something needed to be said about the subject and Chromeo was going to say it through music?

Specifically our songs talk about women, but it could be about anyone in relationships. It could apply to guys who like guys too, it’s just all about human relationships. We would never say that one type of relationship is more normal than the other. Hopefully it all applies to everyone. But, I think the whole empowerment thing—or even presenting a vulnerable image of men…like in “Jealous” right? The idea came from wanting to write love songs from a different perspective than what you mostly hear. You know what I’m saying? Like, you’ve got so many songs that are written from this seductor perspective and we wanted to show another side, whether it’s a confidence booster or, on the contrary, an image of a really powerless, castrated guy. Or talking about fights, or an Oedipus complex or just things that other people don’t sing about. We want to sing about those things.

And, the type of music you make—sexy funk music I guess you might call it—what do you want this music to be in today’s world?

I mean obviously it’s fun music that makes you dance. But by dance I don’t mean jump up and down with your fists in the air, I mean actually dance.

Yeah! I mean, obviously there’s a dance music explosion in North America, but our music is a little more—well, it’s a little sexier and sultrier than just jump up and down stadium music—which we also like, but it’s just about what we choose to do, you know? And I guess the way we choose to touch on that is to combine it with these unusual, quirky lyrics that everyone can relate to.

Oh God, I would love both of those collaborations.

But, we would love to collaborate with R&B singers too. Like Tinashe! a Chromeo/Tinashe record would be pretty cool. Or it could be resurrecting someone like Jamiroquai—a Chromeo/Jamiroquai record would be insane. You know, we’re really open to an endless amount of collaborations. People we’re really surprised when they heard us on a track with Toro y Moi, you know?

Exactly. Excitement. Excitement is what it’s all about. Okay, I’ve got a few questions from some of your biggest fans. One asked if all of the furniture in your house has mannequin legs on it.

[Laughs] Nah, but all of the furniture in P’s house does.

Do you and P have alter egos?

Both, aside from being Dave 1 and P-Thugg of Chromeo.

Yeah! I had my French professor alter ego, you might’ve heard about that. And P has his accountant alter ego, he’s a huge numbers guy. Those are our everyday person alter egos.

That’s great. If you could resurrect James Brown and take him on a date, where would you and P take him?

You mean resurrect James Brown and then P and I take him on a date? [Laughs] I don’t know if James Brown would go on a date with us. But, uh, we’d go dancing! And we’d have him show us his moves.

Speaking of which, do you need any backup dancers for your Red Rocks show?

Of course I am.

Send me your nudes.

[Interviewer blushes and giggles awkwardly like schoolgirl] Okay, I’ll have them to you by tonight.

I have a dedicated email just for that.

Just for nudes? Awesome. It’s probably good to keep it separate from the regular email.

Of course, you can’t mix business and pleasure. That one being business, of course.

[Laughs] Of course the nudes email is all business. If you could say one thing to men and women in relationships, what would it be?

That’s great advice. Also, my independent, single mother wants to know if you and Peter are interested in singing her to sleep for the next 20 or 30 years.

Definitely… just tell her to buy our albums. [Laughs]

Fair enough. And I’ve got a friend whose birthday is actually on the same day as the show at Red Rocks and he wants to know if you’d be interested in playing a little after party.

We can if there are snacks. Will there be snacks?

Oh, there are always snacks. I mean, it’s Denver–munchies capital of the world. Soft tacos galore. We will even supply the White Women.

If there are snacks being served, we can be coerced. If I can eat snacks and watch Netflix on the couch then I’m happy.

I’ll cue up a little Orange is the New Black.

Ooh, now we’re ready to go! Snacks and Netflix–I’m in!

Sweet! Thanks for taking the time to speak to us, I can speak for most when I say I am too excited for this show.

Of course! It was my pleasure. Enjoy the show!

Chromeo will play with Cut Copy, Flume and Duke Dumont. Tickets are available here: http://www.axs.com/events/247024/chromeo-cut-copy-tickets Get ’em while they’re hot.