As Sylvan Esso gains esteem for their upbeat, bass-laden pop music, I can’t help but echo the circumstance that brought this duo together. The music gods dealt Amelia Meath of Mountain Men and Nick Sanborn of Made of Oak a card of kismet. Meath had written a song called “Play it Right” and sent it to Sanborn to remix. The results were nothing short of magical.

Each fits into their role like a piece of a puzzle. Meath writes universally tangible lyrics and sings them with a humility and truth that will make the hairs on your arm stand on end. Sanborn arranges just the right amount of bass lines, spacious synths and tempo-withstanding loops to add to each track without drawing away from the human element. 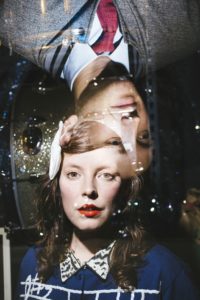 The duo released their first full-length EP, Sylvan Esso, last Friday. The critics already answered with unguarded praise. The praise seems to be as wide-reaching as Meath’s candid lyrics. From the prereleased “Coffee,” to the scraping synths on “Dreamy Bruises,” the album manages to encompass so much at a decidedly singular level for electronic-pop music today. It gratifies. It hurts. It leaves not much more to be desired.

Sylvan Esso will make a stop in Denver at the Gothic Theatre alongside the Tune-Yards next Wednesday. I caught up with Amelia Meath a few days after their debut album began streaming on NPR. She sat huddled in an arcade charging her cell phone.

Her speaking voice carries the same warmth as the tone of her singing. More than anything, I felt as if I’d spoken to her a million times before, like I could tell her anything. She transfers her openness and self-assurance into the truthful lyrics she conjures and she’s one of the most jovial people I’ve ever had the chance to interview. Check it out below!

Amelia Meath: Great! I’m sitting in the corner of an arcade actually charging my cell phone, can you call me back on this other number?

With your album streaming on NPR and about to release, how does everything feel?

It feels so nice! We’ve been taking care of it and holding it really close for almost six months and planning our lives around this potential release. Giving it to people finally is just…nice. It’s such a relief!

I can imagine. Have you read any of the feedback on it? Or are you kind of taking it all in before that?

I’m not very good at avoiding internet comments. I really try and stay away from them. But, I don’t. That being said, all of the positive stuff is just wonderful and all of the negative comments I usually research and figure out who that is that’s saying them. [laughs]

[Laughs] That’s great. I was listening to it earlier and each of the songs is so different but the album is so connected as a whole. Considering your work with Nick was just supposed to be a one-off collaboration, what’s it like to have made a collection of tracks that all seem to hit the mark?

It was just wild. It’s one of those amazing, magical things where you really find your creative partner. I’ve never written so many songs! And we write them each differently. Sometimes Nick will have a beat and I will write lyrics for it. Or sometimes I’ll have a full song and he weaves the beat into it. It’s different every time.

How was it learning to play this type of music live? Considering it’s so different from your side projects.

You know I did a lot of karaoke.

I was worried because with Mountain Man it was really easy to rely on each other a lot because it was a lot of harmony work. You could pretty much start at whatever note you wanted and everyone else would arrange themselves around you. And there was a lot of taking breaks and not singing, so I really wanted to get my stamina up. So I sang a lot of Rihanna songs. [laughs] I worked on dancing and singing at the same time because I knew I’d want dancing to be a big part of the Sylvan Esso show.

How have the shows been so far? Is it tiring, fun?

Oh it’s so dreamy! It’s so fun. It’s also super tiring. It’s like the feeling where you do a lot of physical labor and then you get that meal at the end of the day and it’s so gratifying and you think, ‘My body deserves this meal, because I’ve been working so hard.’ That’s kind of what it feels like.

Wow, that’s a great way to put it! And it seems like you both get along well and you each have mastered your roles. Nick makes awesome beats and your voice pairs so flawlessly; how do you keep the music from ever sounding contrived?

I mean, it flows out naturally. But also one of the best gifts about our collaboration is neither one of us is afraid to say, ‘I don’t like that idea,’ which I find has been my downfall in other collaborative relationships. In the past I was so focused on keeping the dream alive as opposed to creating [something] really great .

And I think that sense of honesty you share with each other really comes through in your music. And something that is often missing in pop music is that pain and truth.

I’m so glad you said that because that’s basically the thesis statement of the band– honesty all the time. And we really wanted to create accessible pop music that came from a pedestrian lifestyle and figuring out how to make catchy songs about being sad. Or about trying to figure [out if] getting cat-called made you feel really good, super threatened or if you just want to go back and hit that guy. [laughs] All of the songs are about questions as opposed to the regular top 40s thing, which currently seems to be stringing together really positive statements over and over. Which is really confusing to me.

I feel like with pop music there is always a theme that circulates and even though the popular songs are by different people, they all hang onto this shared theme. Like one person comes up with it and they all agree.

That being said, I also did so much research for this record into Top 40.

My iPod looks like that of a 14-year-old girl right now.

Oh my gosh, Red is an amazing album, have you heard it recently?

It’s so insane! It has the capacity to make you drool. The production is so wild that I have to take it in small bits, or I’m a drooling mess. Pop music is really like drugs. Like the title track off of Red. [breaks into singing chorus], like fuck, man!

[laughs] Yeah that one is definitely the best on there.

It’s so great to play it loud. Like you know how you have to play the The Who super loud? It lifts your heart up. That’s what we’re all chasing all the time, right?

Exactly. That feeling. The one only music can bring.

Did you grow up with a lot of classic rock?

Oh yeah. Listened to The Who a lot. The Who Sell Out is my favorite. I really loved Foreigner. They’re like my favorite band.

I was a big Styx fan as a child, they were my first live show.

Styx rules! “Cold As Ice” used to make me weep in my car seat. Yeah, the Spice Girls were also a really important band to me. [laughs] I’m really interested in the time of life, I call it ‘musical puberty,’ when suddenly you split off from your parents’ music and start listening to your own stuff.

The days when you had to have someone else purchase the EXPLICIT CDs for you because you weren’t of age.

Yeah! My first CD was The Miseducation of Lauryn Hill. I almost got the Slim Shady record.

I got that at one of my birthday parties and had to go buy the edited version with my mom instead.

Dude that is the worst! You can’t do that–that’s why it’s so cool.

Then I discovered Napster and it was all downhill from there–or uphill, I guess.

Oh, Napster. Napster was so great.

Definitely. Is it ever weird for you to put such painful or truthful lyrics to upbeat dance music?

No, not at all. It’s interesting that you say they’re personal. I suppose they are, but really, all of the topics and things I talk about on the album are things that I would talk about with pretty much anyone that I’ve had a drink or two with at the bar!

[laughs] They are pretty universal.

Those are the songs that I’m so much more excited about writing–about questions that haven’t been addressed musically. I try to avoid writing love songs because there are just so many. I guess pretty much anything you write a song about makes it a love song.

Exactly, it doesn’t need to be about a person.

Right! I don’t need to sing about someone’s hair. Everyone has hair. [laughs]

[laughs] I would love to have a drink with you at a bar! I’m having so much fun right now.

I’d definitely drink with you at the bar!

I love that you’re in an arcade right now.

Oh my gosh, I know. [laughs] We’ve been on the most wild PR trip these past few weeks. And it’s just been solid interviews and photos non-stop. Also, pretty hilarious that my job–that I’m so lucky to have–is making music, but for the past few months by job has been talking about myself or Nick. It’s super weird! But we are so grateful to have this chance to make and share our music.

Well thanks so much for talking to us! Can’t wait for the show.

Any time at all!

Check out Sylvan Esso opening for tUnE-yArDs next Wednesday, May 27th at the Gothic Theatre. Grab your tickets here: http://www.gothictheatre.com/events/detail/250408