While most of Denver was busy buzzing about the newest draft pics last Saturday morning, Broncos Cornerback Chris Harris Jr. and former Bronco Wesley Woodyard hosted a free football and cheerleading camp for Denver youth: “Changing Lives One Play At A Time.” It is only fitting that Harris and Woodyard teamed up to host their camp on the same day the Broncos began signing undrafted free agents. Both Harris and Woodyard are undrafted success stories.

With the help of over 75 volunteers, coaches, and other players the camp focused on both football and life skills, with a strong emphasis on taking a stand against bullying.

“Football can teach you a lot of life lessons,” Wesley Woodyard said to 303. “One of the life lessons is to stand up and stop bullying. Learning that along with football goes hand in hand. It is good to see the kids react to it the way that they have reacted to it throughout the years.” 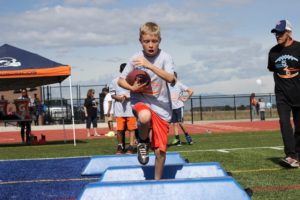 Harris will be returning for his fourth season with the Broncos, while former Broncos captain Woodyard will begin his first season with the Tennessee Titans. Harris is recovering from surgery after suffering from a torn ACL  last December in a game against the San Diego Chargers. But watching him coach the campers and play tug of war with them? You wouldn’t know it.

“I am ready to get back on the field,” Harris said.

With Woodyard moving his football skills to Tennessee, many have wondered if his charitable ways will continue to help the Mile High City.

“It is a wonderful feeling to be welcomed back here in the city I used to play in,” Woodyard said. “We [16 Ways Foundation] are still going to be doing several events here, like our annual Toy Drive will be in December. Even though I am not here, we are still going to be making this community stronger.”

Teammates like Aqib Talib and Ben Garland stopped by to help make an impact.

“I was a Colorado kid — born and raised” Broncos Guard Ben Garland said to 303. Something like this meant the world to me when I was growing up. So I wanted to come out here and give something back to the kids.”

Not only did more than 300 Denver youth walk away with better football or cheerleading skills, but hopefully stronger armor against bullying . And that is a touchdown for The Mile High City.