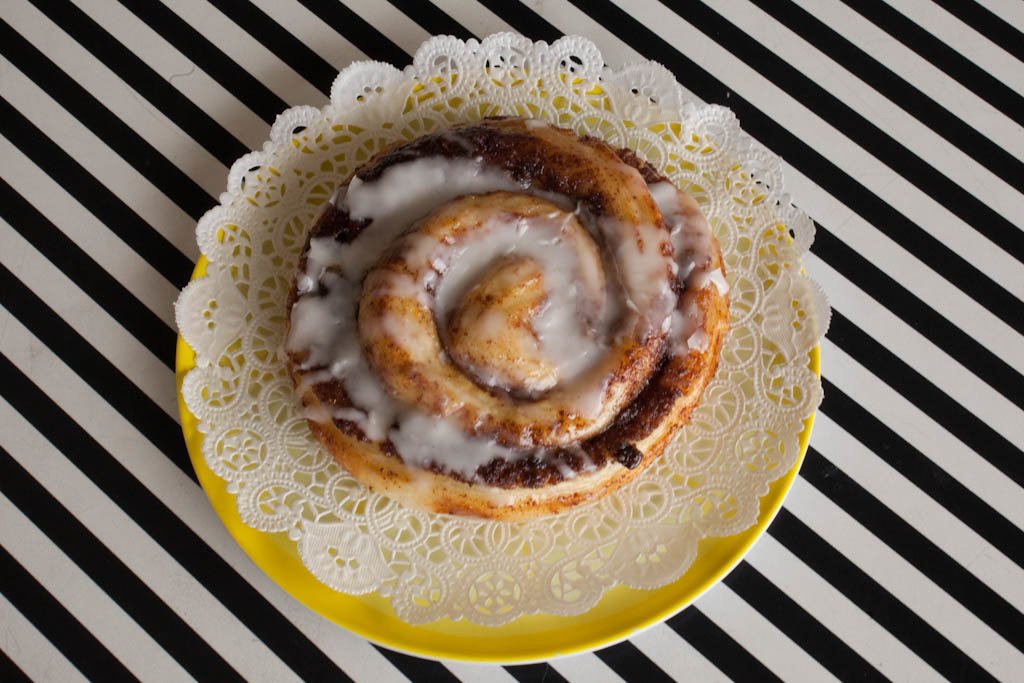 I don’t think I’ve ever met someone who doesn’t love a good cinnamon roll. That’s why I went everywhere from truck stops to cafes searching for the best cinnamon roll in the Denver area. While many claim to be the best, I wanted to find the real winner. It wasn’t an easy decision— the rolls I tasted ranged from bread-like and heavy to flaky, croissant-like creations. And the icing on top? Everything from thick cream cheese to toffee drizzle to melted butter. Hungry yet? Here, a rundown of the best of the best.

Pros: Now with four locations across the Denver area, there’s no reason not to try one of the namesake rolls. They are light and flaky, unlike most cinnamon rolls, and they come in a handy two-bite size if you just wanted a little taster. You can also choose from six different glazes, but my favorite has to be the Pecanilla.

Cons: If you were looking for the cinnamon roll of your youth, you may be disappointed. These are definitely not the gooey, doughy confection that you may be accustomed to. 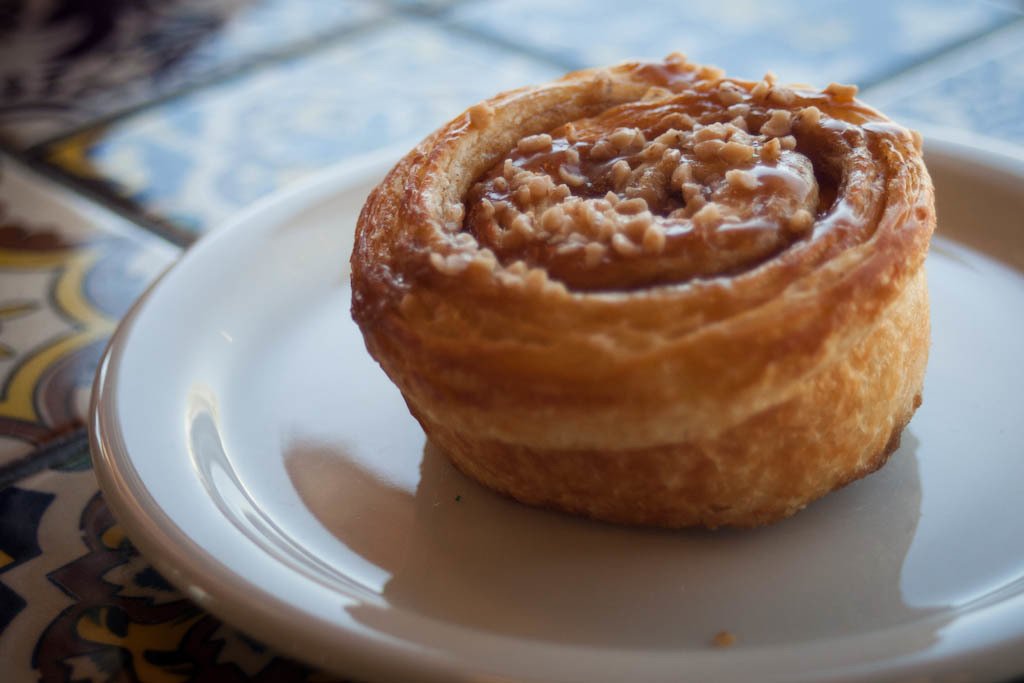 The Duffeyroll. Photo by Jackie Collins.

To be perfectly honest, I was a little conflicted with naming Duffeyroll as the winner. Why? Because the Duffeyroll is kind of it’s own thing, in the sense that it bears little resemblance to the thick, doughy rolls I am accustomed to. The pastry itself probably has more in common with a croissant. These rolls are flaky with crisp outsides, and they are not so much drenched in icing as they are lightly drizzled. Owner Nick Ault explained that when the café began in 1986,  they really carved out a niche by offering something akin to “the Grey Poupon of cinnamon rolls”—a refined alternative to a ginormous, gooey Cinnabon. The business has grown a lot in its long run—it all began with pushcarts rolling up and down the 16th street mall selling warm rolls. The first shop opened up on Hampton at the Happy Canyon shopping center, but there are now three more, including the newest addition downtown on Blake Street. It’s easy to see why the business has grown so much, as the buttery, flaky Duffeyrolls are addicting.
The Duffey now comes with six different glazes (including mountain maple and Irish cream) and two sizes. Ault says that most of the glaze recipes were happy accidents—experimental late night recipes that resulted in keepers, like the orange variety, flavored with Grand Marnier. The two-bite size roll was also an accident, but the positive response to this mini was overwhelming. Go figure—now a mini roll accompanies every order at the café, the kind of hospitable touch that defines the business.
The original Duffeyroll is a great place to start, with a nice crisp outside and soft center, lightly dusted with cinnamon sugar. As I’ve mentioned, this roll is really more like a pastry—you could easily take it on the go and eat it sans plate or fork. My favorite glaze, however, was the Pecanilla, with a vanilla cream cheese frosting drizzle and pecans. Whether or not you that agree that the Duffeyroll qualifies as a cinnamon roll, you will agree that it is definitely delicious. While many bakery trends have come and gone over the past twenty-five years, Duffeyrolls have stood the test of time.

Pros: The cinnamon roll at this popular spot is a classic done well. The swirls of dough are moist, and the cinnamon flavor is pronounced but not overwhelming. Oh, and the cream cheese icing is to die for.

Con: This is one big cinnamon roll. It will be difficult, but I would recommend splitting it with someone or taking half home if you don’t want to overdose on sugar. I’m speaking from experience here.

This eatery on the corner of Larimer is probably best known for their scratch-made bagels and breads, but don’t leave without sampling the cinnamon roll. Hi*Rise’s take on the cinnamon roll is on the larger side, and comes hand-slathered with a thick, tangy cream cheese icing. Their rolls have a classic, nostalgic flavor and win serious points in my book for not being too sweet. I loved the real butter and pure cinnamon flavor, and the moist dough that had a tiny bit of a crispy edge. Oh, and that cream cheese icing? Hands down best icing out of all the contenders I tried. 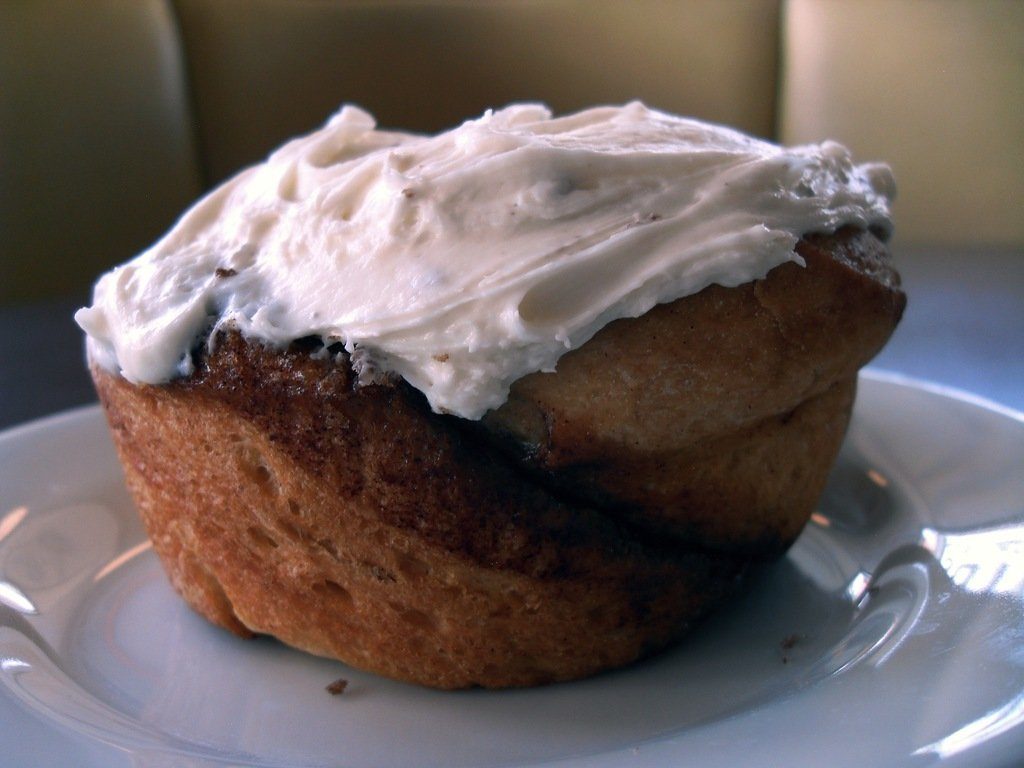 Pros: First off, this is definitely the best bang for your buck. The melted butter served on top of this roll makes it supremely decadent, and there is plenty of cinnamon flavor.

Cons: The setting might be a little off-putting for some, with all the random knick-knacks for sale hanging on the walls and the dated tables and floors. I would recommend just embracing it and enjoying the friendly service and solid food.

You might feel as though you’ve stepped back a few decades when you walk in to the Butcher Block Cafe. This place is the embodiment of old school—from the greasy spoon diner fare, friendly waitresses, and no-frills décor. The rich cinnamon roll will bring you back to simpler times as well, served warm with a more-than-generous amount of melted butter on top. The owner’s son makes them from scratch every day, filling the pillowy dough swirls with lots of cinnamon flavor. Not to mention, they are a steal at just 1.95.

Pros: The friendly owner of this hidden gem of a bakery makes everything here herself, from the french pastries to the decorated cookies. The cinnamon danish has flaky outsides but is very moist inside, with plenty of icing.

Cons: The cinnamon roll was delicious, but the dough right in the center was a little underdone.

This place is hard to find—it’s a hole in the wall, tucked away in a strip mall in the ‘burbs. Walking in, you may wonder if you’re in the right place—the sign out front just reads ‘bakery,’ and the décor is a bit dated. But you will immediately notice trays of stunningly decorated cookies and cupcakes, and of course, the award-winning cinnamon Danish. While it may not technically be a cinnamon roll, it looks the part, with swirls of flaky dough and cream cheese icing on top. The Danish dough here made for a light roll, and while it was definitely delicious, the center was a little undercooked for my liking.

Pros: This roadside stop off of I-25 is a great place to pick up a tasty snack on the go. The cinnamon rolls are seriously gigantic-just one is more than enough for two hungry people.

Cons: The icing on this roll was overly sweet for my taste.

This truck-stop style restaurant has been around for more than sixty years, and they’ve been serving their “world famous cinnamon rolls” for almost as long. If you’re headed North on I-25 and you need a hearty snack, the gigantic cinnamon rolls they sell here will more than do the job. These rolls are seriously large—I could not finish one to save my life. The rolls here are very moist and almost cakey, and while I loved the dough, I was not a fan of the sticky sugar icing. The icing lacked any cream cheese to balance all the sugar, and without it, the roll was a bit too sweet. 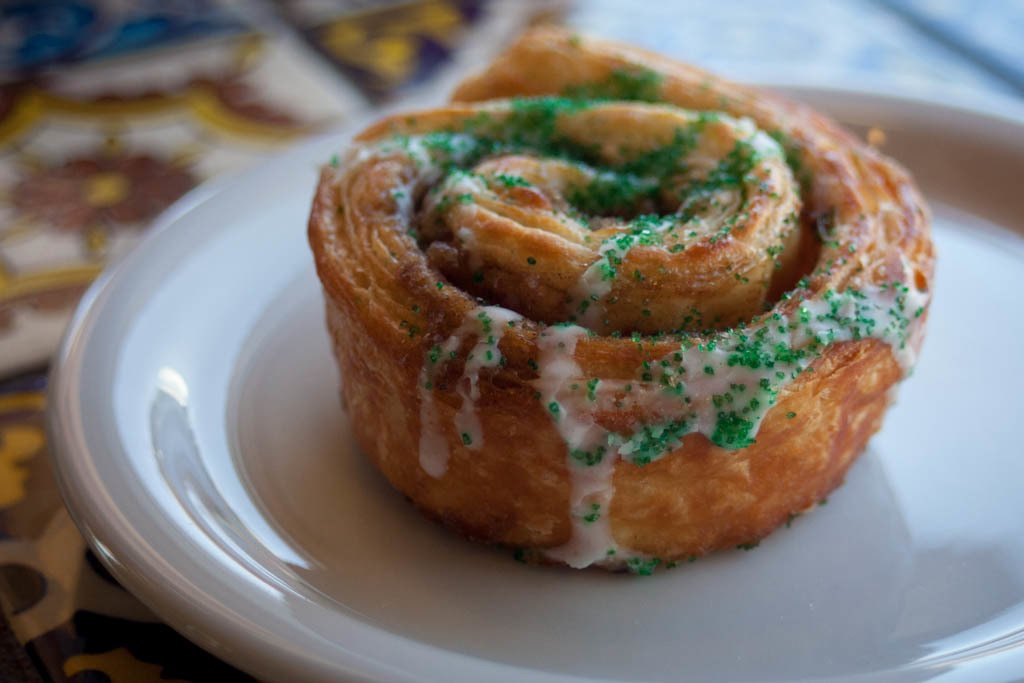